Copyright: © 2015 Elkholy SH. This is an open-access article distributed under the terms of the Creative Commons Attribution License, which permits unrestricted use, distribution, and reproduction in any medium, provided the original author and source are credited.

Although the multifocal visual evoked potential (mfVEP) was introduced in 1994 by Baseler, Sutter and colleagues [1], its development has lagged behind the multifocal electroretinogram (mfERG). The large inter subject variability in mfVEP responses has discouraged its use.

There are two main sources of inter-subject variability. First, the position of the calcarine fissure relative to the external landmarks varies among individuals [2]. Second, individuals differ in the way the cortex is folded and how the primary visual area is positioned within these folds [3,4].

If inter-subject variability is due to cranio-occipital variations, then the mfVEP responses from the two eyes should be identical. The reason for this is purely anatomical; any point in the visual field projects to the nasal retina of one eye and the temporal retina of the other, but both points project to essentially the same region of striate cortex [5].

The waveform of the localized mfVEP response changes in polarity across the horizontal meridian, which could be explained by the position of the generating cortical dipoles relative to the location of the recording electrodes [6]. With bipolar recording, the responses for stimulation of the upper and lower visual fields were reversed in polarity as expected from the anatomy of the visual pathways [1,7].

Compared with most electrophysiological tests of visual function, the mfVEP has the advantage that it produces a topographical measure of damage [8]. It does not seem to have a learning curve [9], and it has a high level of patient acceptance [10]. It has been shown to be 95% to 97% sensitive for glaucomatous scotoma detection in clinical trials. In contrast with hemifield visual loss (Humphrey visual field-HVF) testing, the objective perimetry provided by mfVEP is less affected by patient performance or learning curve [11]. It can be used for ruling out nonorganic visual loss, diagnosing and observing patients with optic neuritis and multiple sclerosis, and observing disease progression [12]. The technique evaluates the pathway from the retinal receptors to the occipital cortex and assesses the visual field out to 30° using a multifocal pattern VEP stimulus, with multichannel recording. The rapidly alternating checkerboard pattern derives which signal response in the brain came from which location in the field by cross-correlating the signal recorded with the pattern reversal on the screen [8] (Figure 1). 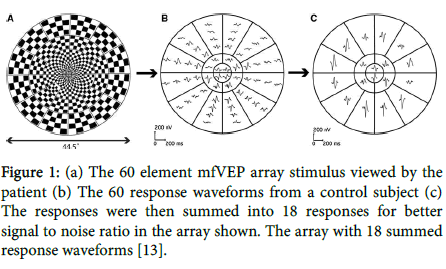 Figure 1: (a) The 60 element mfVEP array stimulus viewed by the patient (b) The 60 response waveforms from a control subject (c) The responses were then summed into 18 responses for better signal to noise ratio in the array shown. The array with 18 summed response waveforms [13].

The stimulus normally consists of a single cycle of a binary m-sequence. Using a longer m-sequence rather than averaging several shorter ones prevents contamination by higher-order kernels and, thus, provides cleaner separation of the local response contributions [14].

Raw trace data are analyzed with Peak-to-trough amplitudes for each wave within the interval of 60 to 220 ms are determined and compared among channels for every stimulated segment of the visual field. Amplitude and latency for each field sector of the mfVEP is determined [6]. It is important to monitor the patient’s eye position as unsteady fixation can cause diminished responses in the centre of the field [15].

The diagnostic utility of mfVEP is enhanced by combining it with mfERG. Retinal problems could be missed if the diagnosis is based on mfVEP of normal or near normal amplitude, on the other hand in patients with marked delayed mfVEP retinal problem could be confused with optic neuritis particularly with normal appearing fundus [16].