Copyright: © 2015 Burugupalli S. This is an open-access article distributed under the terms of the Creative Commons Attribution License, which permits unrestricted use, distribution, and reproduction in any medium, provided the original author and source are credited.

The multifractality in real world non stationary time series data are described better from scaling exponents. The observed signals of the physical quantities characterizing any complex system like social, financial, ecological, biological or technological are composed of large number of interacting assorted parameters linked each other nonlinearly and they exhibit long-range correlations. It is of crucial importance and significance to quantify such long-range correlations to have a deep understanding of the dynamics of the underlying complex systems. The theory of fractals proposed by Mandelbrot [1] in contrast to the efficient market hypothesis leads to study of complex system behavior through different method development and approaches. Hurst [2,3] proposed rescaled range analysis (R/S), the most popular analysis method for fractals. To overcome R/S analysis method sensitiveness to short-term auto-correlation and nonstationary nature causing bias error; detrended fluctuation analysis (DFA) method was proposed [4] which applied long-range power-law correlation. DFA and its multifractal generalization MF-DFA methods [5] are widely used to describe the fractal properties. Many researchers studied multifractal properties on the different non stationary natural and financial time series data like biological data [6], exchange rate market [7], stock market [8,9] gold market [8,10], crude oil market [9-12]. Two major sources of multifractality which can be found in various time series: one is nonlinear temporal correlation for small and large fluctuations; while the other is fat-tailed probability distribution of increments [8,13,14].

Also multifractality in the daily returns of emerging European stock markets is studied using the Empirical Mode Decomposition (EMD) based Multifractal Detrended Fluctuation Analysis [15]. A comparison study of different fluctuation methods for analyzing nonstationary time series were studied for efficacy of the methods like Fluctuation Analysis (FA); Detrended Fluctuation Analysis (DFA) and Detrended Moving Average (DMA). It was reported that [16] Centred Detrending Moving Average (CDMA) and DFA are the Methods of Choice in determining the Hurst index of time series. CDMA has the best performance while DFA is only slightly worse in some situations. Also CDMA and DFA are less sensitive to the scaling range compared to other methods like FA.

Efficiency of Brent and WTI crude oil market was analyzed by means of R/S analysis [27]. Dynamics of crude oil prices was studied thru stochastic multi-model approach [28]. Market agent perspective on fractal features in crude oil time series was studied [29,30]. From the analysis it was evidence that the crude oil market is a persistent process with long-range memory effects with multifractal structures. The MFDFA analysis on gold price revealed that multifractality is mainly due to the temporal correlation [30]. But there exist a cross correlation between the gold and Crude oil time series to study market behavior and underlying complexity. This article is focused on that study to analyze the cross correlation between Gold and Crude Oil. The section 2 of the article presents the MFD CCA procedure while the Section 3 describes the data. The Section 4 shares the result and its analysis. Section 5 gives our conclusions.

are the average of the two time series x(i) and y(i).

Step 2. The profiles X(i) and Y(i) are divided into Ns=[N/s] nonoverlapping windows of equal length s. Since the length N is not always a multiple of the considered time scale s hence in order not to discard the section of series, the same procedure is repeated starting from the reverse end of each profile. Thus, 2Ns non-overlapping windows are obtained together.

Step 4. Hence the qth order fluctuation function would be,

If q ≠ 0 then the qth order fluctuation function would be,

When q=2 the MFD CCA is as like CCA

Step 5. Analyze the scaling behavior of the fluctuations by observing logarithmic plots between Fq(s) and s for each values of q. If the two series are long-range cross-correlated then the Fq(s) will increase for values of s and we can obtain a power-law expression as

Hence taking log on both sides, we could represent this as

If the Renyi exponent τxy (q) is linear of the q, we can conclude that the two correlated series is monofractal, otherwise, it is multifractal. The multifractal spectra fxy (α) describes the singularity content of the time series which could be derived through the Legendre transform:

Although crude oil prices possess long-range dependence, the degree of long-range has decreased in short time horizons, although the market is tending towards efficiency regime at long. Crude oil is called the blood of industries which plays an important role in all economies driving backbone of financial system. Oil price, as one of the main focal points in many countries, has become an increasingly essential topic of concern to governments, enterprises and investors. Therefore, understanding the dynamics of its price time series seems to be crucial, since it may allow one to assess the potential impacts of its shocks on several economies and on other financial assets. Similarly Gold price fluctuation and trading is directly related to market inflation in any country. So it becomes evident for a cross correlation study and analysis on Gold and Crude Oil time series.

We choose the daily closing data of West Texas Intermediate (WTI) crude oil obtained from the Energy Information Administration, US Department of Energy (http://www.eia.gov/dnav/pet/pet_pri_spt_s1_d.htm) and the Gold data obtained from (http://fx.sauder.ubc.ca/data.html) for the period of 3rd January 1995 to 13th August 2013 with total 4486 data points. The return of daily price is calculated as,

where Pt being the daily closing price index at time t (Figure 1). 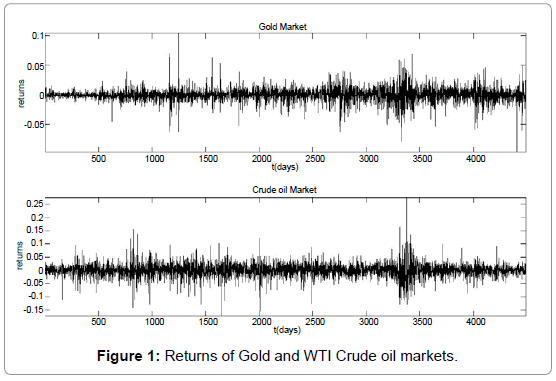 To test the presence of cross-correlation quantitatively we need MF-X-FA method which can estimate the cross-correlation exponent. We show the log-log plots of fluctuation function Fq(s) versus time scale s for Gold and WTI Crude oil markets. In Figure 2 we can find that only one line cannot fit the log-log plots of Fq(s) versus time scale s well. Hence we define the “crossover” s*, as the turning point when the linear trend of the curves underwent a fundamental change. The short-term behavior of financial market is easily influenced by the market external factors such as the major events while the long-term behavior is determined by the internal factors. With the time evolving, the short-term shocks gradually decay for the effects of long-term supply and demand mechanism in the markets. The scaling exponents for s<s* can reflect the short range correlation also imply the correlated behaviors in the short-term. Then, the scaling exponents for s>s* imply the correlated behaviors in the long-term (Table 1). Thus, we can say that the ‘‘crossover’’ can reflect the lasting period of the effects of the factors which determine the market short-term behavior. We found the ‘‘crossover’’ at about ln (s*)=4.8 (i.e. 130 days). We provide the slopes of each line, just the scaling exponents for s<s* and s>s* in the Tables 2 and 3 respectively. Table 1: Descriptive statistics for the returns of Gold and WTI Crude oil markets. 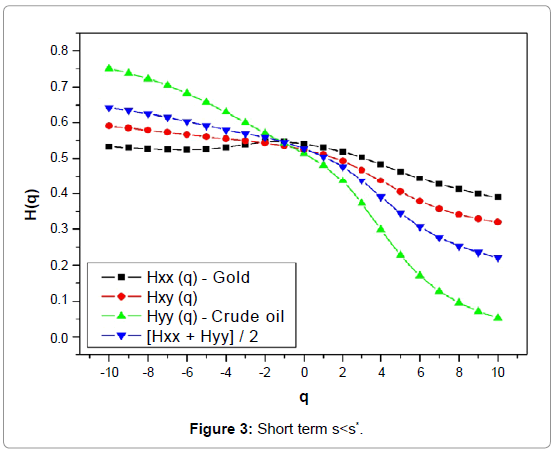 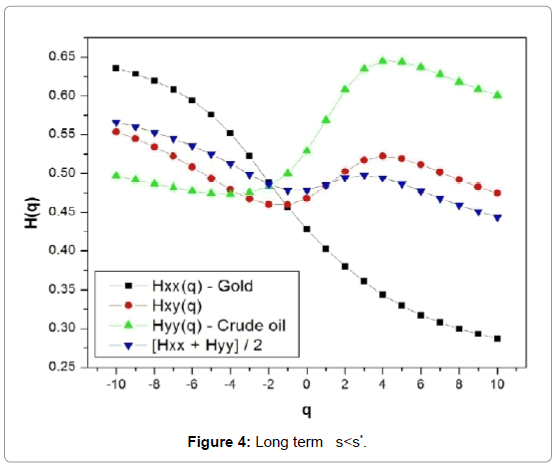 Historically gold retains its value during times of crisis and is used as a hedge against inflation, deflation or currency devaluation. Gold also most popularly used as an investment. Crude Oil is a vital source of energy for the world hence higher crude oil prices drive fuel inflation as crude oil demand is inelastic. Diversity of participants like producers, government, extreme socio-political events and speculators drive crude oil market price.

The results demonstrate the overall significance of the crosscorrelation based on the analysis of multifractality. We found that the global Hurst coefficient varies with the q and there is multifractality evidenced through the multifractal spectrum also. We get the crosscorrelation exponent 0.48. We found that there exists a power-law cross-correlation between the Gold and Crude Oil time series and the multifractal features are significant. The analysis throws light on the structure of crude oil and Gold market as well as its link to macroeconomic conditions and socio-political extreme events.

From our analysis we found Gold price has long term correlation with crude oil price. That is the reason why gold is sold off during economic weakness as it’s also used as a kind of proxy currency. Currencies tend to lose their purchasing power over years due to inflation and as time passes it can’t buy the same amount of oil which could have bought years ago while gold could. The main idea behind the gold-crude oil cross correlation is the one which suggests that prices of crude oil partly account for inflation. Increases in oil price increases prices of gasoline which is derived from oil which drives transport of goods costly hence the Good prices rises. As a final result inflation hence gold price tend to appreciate with inflation rising. So, an increase in the price of crude oil can eventually translate into higher gold price.