Copyright: © 2017 Sohn SY, et al. This is an open-access article distributed under the terms of the Creative Commons Attribution License, which permits unrestricted use, distribution, and reproduction in any medium, provided the original author and source are credited.

Multifocal motor neuropathy with conduction block (MMNCB) is a rare chronic immune mediated polyneuropathy which prevalence is known to be less than 1 per 100000 [1]. Although rare, if recognized early and properly managed, MMNCB is a treatable condition. MMNCB should be distinguished from other chronic acquired demyelinating polyneuropathy, especially in that MMNCB is resistant to corticosteroid and plasmapheresis [2]. To date, intravenous immunoglobulin (IVIG) administration is the mainstay of MMNCB therapy owing to its excellent safety profile as well as its clinical efficacy [3,4]. 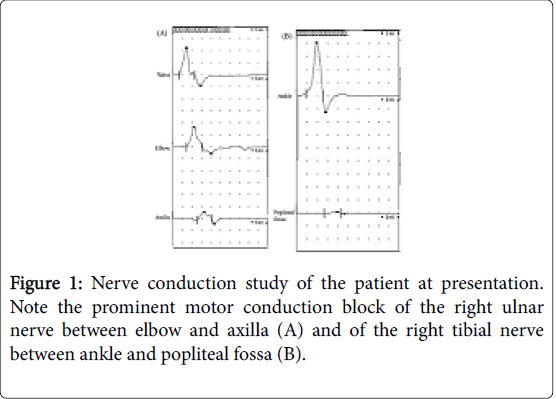 Under the diagnosis of MMNCB, the administration of IVIG was initiated (0.4 g/Kg/day for 5 days). White blood cell count began to decrease from day 2 and showed nadir on day 4, reaching absolute neutrophil count of 370 cells/μL. The occurrence of leukopenia was thought to be due to neutropenia, since neutrophil count decreased most prominently, accounting for 22 percent of total leukocytes during nadir (Figure 2). White blood cell count recovered to normal range 2 weeks after completion of IVIG infusion. Serum IgM anti-GM1 antibody was detected at high titer (>100% by enzyme-linked immunosorbent assay; Bühlmann Laboratories, Switzerland), confirming the diagnosis in our patient. 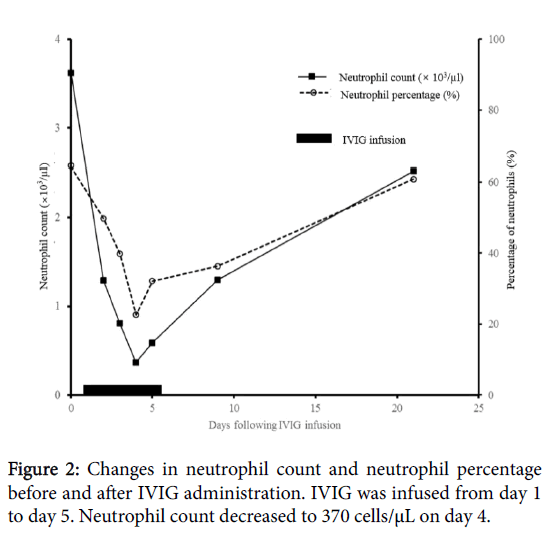 Since the introduction of IVIG therapy in various immunological diseases, neutropenia was reported as a rare adverse event. Neutropenia following IVIG was initially recognized in patients with idiopathic thrombocytopenia purpura [7,8]. Ben-Chetrit et al. [9] reported a patient with active systemic lupus erythematosus who received two courses of IVIG infusion. Marked neutropenia developed repeatedly after each IVIG course, confirming the association between IVIG infusion and neutropenic event. In the present case, neutropenia developed on day 2 after initiation of infusion and reached nadir on day 4. In line with previous reports [8,10], leukocyte counts of our patient returned to baseline after 2 weeks without any complication.

The mechanism of neutropenia following IVIG remains to be elucidated. Tam et al. [11] reported a child with Guillain-Barre syndrome, in whom the authors revealed the presence of antineutrophil antibodies. Some authors suggested roles of atypical antineutrophil cytoplasmic antibodies (ANCA) [12,13]. IgG aggregates with immune-complex-like activity was suggested as the cause of transient neutropenia by some researchers [9,14]. Matsuda et al. [10] focused on two factors located in the surface of neutrophils: a complement receptor CD11b and an Fc gamma receptor CD16. Of the two surface antigens, only the level of expression of CD11b was found to be decreased after IVIG. The authors concluded that circulating neutrophils may adhere to vascular wall with the involvement of CD11b. More recently, von Gunten et al. [15,16] demonstrated that neutropenia was mediated by sialic acid-binding immunoglobulin-like lectin 9 (siglec-9) expressed on neutrophils. IVIG preparations may contain natural autoantibodies to siglec-9 and these autoantibodies can cause neutropenia in both caspase-dependent and independent manner.

The side effect of IVIG in MMNCB, including our case, should not be considered as similar to that seen in other neurological disorders. For instance, IVIG is widely used in GBS patients, but it is not necessary to continue IVIG administration despite side effect such as IVIG-induced neutropenia, since GBS usually does not recur and there are other treatments as plasmapheresis. In CIDP or polymyositis, alternative therapies such as corticosteroid or other immunosuppressive agents are still available. IVIG therapy is unique for MMNCB patients with no suitable alternative, since corticosteroids or plasmapheresis can lead to worsening of the disease and immunosuppressive agent like cyclophosphamide is limited owing to its cumulative toxicity [3]. Furthermore, long-term regular maintenance dosing of IVIG is required in most cases of MMNCB [2]. We found no articles discussing the long-term safety of repeated IVIG administration in patients with IVIG-induced neutropenia. If neutropenia occurs repeatedly, there is always possibility of exacerbating or causing sepsis, and some authors have expressed concerns about using IVIG in these situations [17].

Neutropenia following IVIG administration has been considered to be transient and self-limited. However, it may be an important clinical issue in MMNCB because long-term IVIG infusions are often required. Further studies on the mechanism of IVIG-induced neutropenia are required to manage patients with MMNCB properly.