#Contributed equally to the study

Copyright: © 2015 Palestro CJ, et al. This is an open-access article distributed under the terms of the Creative Commons Attribution License, which permits unrestricted use, distribution, and reproduction in any medium, provided the original author and source are credited.

In vitro labeled leukocyte imaging is the radionuclide gold standard for imaging most infections in the immunocompetent population [1]. Although there are extensive (>30 years) data demonstrating the role of labeled leukocyte imaging for diagnosing inflammation and infection, data concerning the use of the technique for monitoring leukocyte trafficking are scarce [2-5]. Most of these investigations evaluated time activity curves, and compared the results to known inflammation models, without correlative biochemical/histopathological evaluations. In particular, there are few data on the use of labeled leukocytes to monitor the effects of agents used for neutrophil blockade. The objective of this investigation was to determine the potential of 111In-labeled leukocytes (InWBC) to monitor leukocyte trafficking, by comparing the radionuclide results with cellular content of bronchoalveolar lavage and myeloperoxidase (MPO) activity levels, for monitoring neutrophil trafficking in an animal model of pulmonary inflammation with and without neutrophil blockade.

All studies were approved by the Institutional Animal Use and Care Committee at the Feinstein Institute for Medical Research. Thirty-five young male Fisher rats (250 g, approximately 10-12 weeks of age), including 12 for leukocyte harvesting and labeling purposes, were used. The remaining animals were divided into three groups: Controls (n=8), Inflammation (n=8), and Blockade (inflammation+neutrophil blockade; (n=7)).

For each group, 15-20 mL blood was withdrawn from four donor rats via cardiac puncture. Rat erythrocytes are not amenable to gravity sedimentation and therefore red cell separation was accomplished using a lysis buffer (pH7.4), containing ammonium chloride (1.5 M), sodium bicarbonate (0.1 M), and 1.85 g disodium EDTA (0.01 M) in sterile water. The pH was adjusted to 7.4 and the buffer filter-sterilized through a 0.22 μm membrane. Red cell lysis was performed by incubating whole blood in a mixture of 1 part lysing buffer and 9 parts sterile water at ambient temperature for ten minutes. After cell lysis and centrifugation (450 g, 10 minutes), the resulting WBC pellet was washed twice in sterile 0.9% NaCl, resuspended in 0.9% NaCl, and incubated with 37- 41 MBq 111In-oxine for 30 minutes. Following repeat centrifugation, 3.7-4.6 MBq InWBC was injected into each anesthetized rat via the tail vein. An aliquot of InWBC was retained for determination of labeling efficiency and cell integrity.

Labeling efficiency (LE) was calculated using the formula LE=C/ (C+W) × 100, where C was the cell associated activity and W represented the activity associated with the supernatant. InWBC integrity was assessed by light microscopy using trypan blue exclusion of ≥100 cells [6]. Cell integrity (V) was calculated using the formula V=N/(N+B) ×100, where N represented the number of intact cells and B represented the number of labeled leukocytes that had taken up trypan blue as a consequence of lapse in membrane integrity.

In the Inflammation and Blockade groups, pulmonary inflammation was induced by the intra-tracheal instillation of the staphylococcal wall components, lipoteichoic acid (LTA) and peptidoglycan (PGN) as previously published [7-9]. Two hours before InWBC injection, animals were anesthetized with an intramuscular injection of ketamine (45 mg/kg) and xylazine (5 mg/kg). The trachea was surgically exposed and a mixture of LTA (75 μg) and PGN (250 μg) in 100 μl 0.9% NaCl was instilled intratracheally using a 29-gauge needle. The wound was closed using 5.0 silk sutures and the animals were allowed to recover.

In the Blockade group, immediately prior to the intra-tracheal instillation of LTA-PGN, blockade of CXCR1 and CXCR2 on the endogenous neutrophil population was achieved with Antileukinate, a synthetic hexapeptide with acetylated amino- and amidated carboxyterminus (Ac-RRWWCR-NH2). Our previous studies have shown Antileukinate to be a potent inhibitor of CXC chemokine binding to the CXCR1 and CXCR2 receptors, thereby inhibiting neutrophil chemotaxis and degranulation [10-14]. Briefly, the femoral vein was isolated; a 24-gauge cannula was inserted and tied in position. Antileukinate (10 mg/kg in 200μl of 0.9% NaCl per rat; Syn-Pep Corp, Dublin, CA) was injected followed by 100μL 0.9% NaCl. After cannula removal, the vein and skin were closed by sutures. For receptor blockade of the exogenous InWBC, the labeled cells were incubated with 6 mg Antileukinate In vitro for 20 minutes at ambient temperature just prior to tail vein injection.

Ante mortem imaging was performed in anesthetized rats 18-30 hours after InWBC injection. Ten-minute 128 × 128 matrix dorsal images were obtained using a pinhole collimator with a 5-mm-aperture. Energy discrimination was accomplished using 15% energy windows centered on the 174 keV and 247 keV photopeaks of 111In (Figure 1) a five-minute image of the injection site, using the same acquisition parameters, was obtained for quality control purposes. 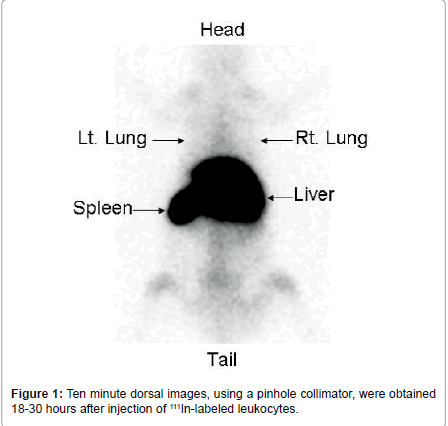 Immediately after imaging, the anesthetized animals were euthanized by exsanguination via cardiac puncture. Post mortem, the lungs were lavaged twice via the trachea with 7 mL of 0.9% NaCl and the resulting bronchoalveloar lavage fluid (BAL) was kept on ice. After centrifugation, the cell pellet was resuspended in Hank’s balanced salt solution (HBSS; Gibco, Grand Island NY). Total and differential cell counts were performed by light microscopy using a hemocytometer and assessment of hematoxylin and eosin stained cytospin preparations, respectively. The total number of cells as well as the absolute number and percent of neutrophils recovered from each rat were calculated and recorded. Lung, heart, liver, spleen, kidney, marrow, intestine, blood, and muscle were harvested and 111In activity per gram of tissue was determined with a gamma counter (Packard Cobra®, GMI Inc., Ramsey, MN). Results were expressed as a percent of total tissue activity.

Statistical analysis was performed using commercially available software. Values are reported as mean ± standard deviation. ANOVA determined whether there were any significant differences among the 3 groups for each organ. Continuous variables were tested by the D’Agastino-Pearson test to determine if they were normally distributed. The paired t-test was used in comparing values between groups for continuous variables that were normally distributed. Frequencies and percentages were used to characterize categorical variables. χ2 analysis of proportions was used to compared ratios. A probability, p<0.05 was considered statistically significant.

*Determined after Antileukinate incubation. There were no significant differences in labeling efficiency or cell integrity among the three groups. 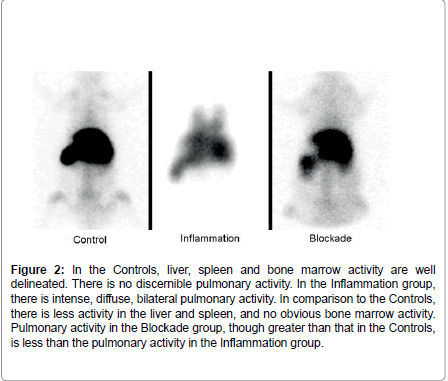 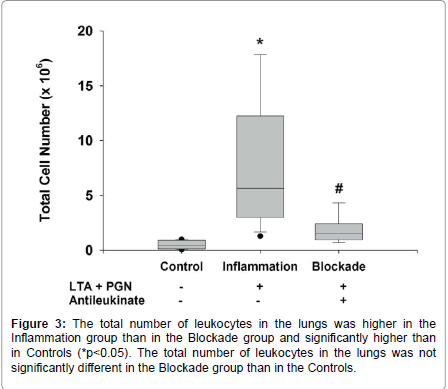 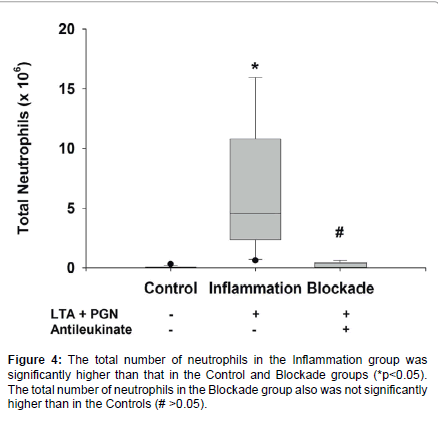 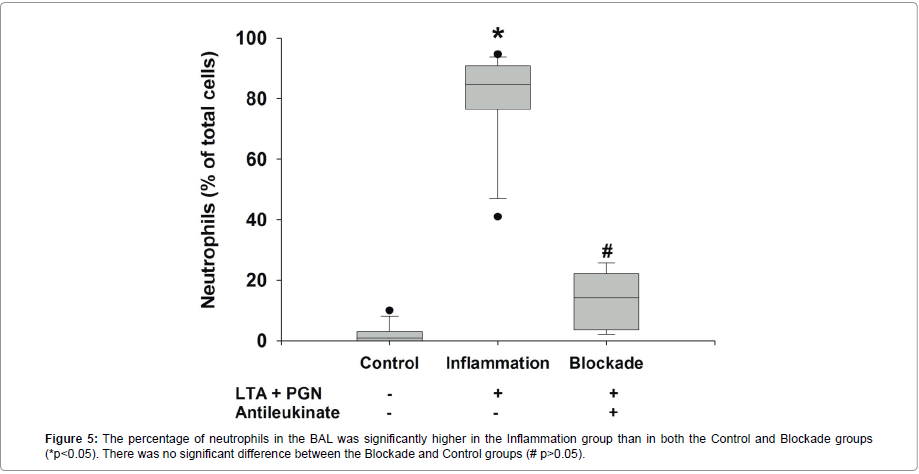 Figure 5: The percentage of neutrophils in the BAL was significantly higher in the Inflammation group than in both the Control and Blockade groups (*p< 0.05). There was no significant difference between the Blockade and Control groups (# p>0.05).

Differences in InWBC activity among the three groups were also observed in organs other than the lungs. There was significantly less InWBC activity in the spleen in the Inflammation and Blockade groups than in the Controls (p<0.0001). There was significantly more activity in the other organs in the Blockade group than in the Controls and the Inflammation group (Table 4).

In the current study pulmonary inflammation was induced by intratracheal instillation of LTA and PGN [8]. LTA and PGN are surface associated adhesion amphiphiles present in Gram positive bacteria. Released during bacteriolysis, these potent stimulators of Toll-like receptor 2, when injected locally, work in synergy to stimulate release of pro-inflammatory cytokines and chemokines, including neutrophil chemotaxins and other inflammatory mediators, from surrounding cells and synergistically induce neutrophil migration into the lungs. The derived neutrophilic response to the intratracheal challenge is concentration dependent and in the current study we used a dose that induced pulmonary inflammation, in the absence of severe injury [8,9]. The magnitude of the inflammatory response varied considerably between individual animals and as we have seen in other studies the variability is associated with the concentration of the challenge [9] , and the age of the animal [16]. To block neutrophil activation, we used a synthetic hexapeptide, Antileukinate. The peptide, which was originally discovered using a peptide library approach [17], inhibits neutrophil chemotaxis , and degranulation [10] in a variety of models [12,14, 18-20]. Importantly, receptor inhibition reduced both the number of cells that migrated to the site of challenge, and the variability of the response following pulmonary challenge.

We found that InWBC results accurately characterized stimulation of neutrophil migration in pulmonary inflammation. InWBC activity was significantly higher (p<0.0001) in the lungs of the Inflammation group, than in the lungs of the Controls. The radiolabeled leukocyte results, moreover, closely paralleled those of pulmonary MPO activity and, as measured in BAL, the total leukocyte count, total neutrophil count and percent neutrophils in the lungs. Our results are in agreement with the findings reported by Lewis et al. [5] and Dormehl et al. [3].

In addition to differences in pulmonary activity among the three groups, we observed differences in other organs as well. In the Controls, InWBC accumulated primarily in the spleen, liver and bone marrow. In the Inflammation group, splenic activity decreased as the labeled leukocytes were redirected to the lung, indicating altered InWBC trafficking. This observation is in agreement with what previously has been reported by Dormehl et al. [3]. In the Blockade group, there was increased activity in all other organs, except the spleen, compared to the Controls and the Inflammation group. We did not however observe any increase in MPO activity in these other organs (data not shown). This likely is due to differences in method sensitivity. The exact reason for the increased organ activity in the Blockade group remains uncertain. One possibility is related to the effect of proinflammatory mediators on the normal neutrophil life span. Circulating neutrophils have always been considered to be short lived, with estimates of half-life in rodents varying from 1.5-12.5 hrs under normal conditions [20-22].

However, there are many factors that may delay normal apoptosis. Exposure to endogenous or exogenous proinflammatory mediators (such as CXCL2 or LTA) and extravasation into the alveolar space prolong neutrophil lifespan [20,23,24]. It is possible that this may explain our results. It also is possible that the altered distribution observed in the Blockade group is a direct effect of Antileukinate itself. This, however, was beyond the scope of this investigation.

In summary, in a rat model of pulmonary inflammation using Antileukinate to block neutrophil receptor recognition of major neutrophil chemotaxins, InWBC accurately characterized neutrophil trafficking to the lungs and potentially may be able to provide data about leukocyte migration and fate under normal conditions as well as the effects of various agents, both stimulants and immunosuppressants (e.g. glucocorticoids), on leukocyte migration in homeostasis and in diseased states. The data also suggest that InWBC may be useful to monitor the effects of lung inflammation and its regulation of extrapulmonary neutrophil trafficking.

The authors thank Ms. Erica Spessot for assistance with editing of the manuscript.