New Concept for Correction of Brachymetatarsy by 3D CT-Scan Measurement

Copyright: © 2014 Alkar F, et al. This is an open-access article distributed under the terms of the Creative Commons Attribution License, which permits unrestricted use, distribution, and reproduction in any medium, provided the original author and source are credited.

We reported progressive metatarsal lenghtening by external fixator after osteotomy by open approach without bone interposition in a case of brachymetatarsia upon the third and fourth metatarsals. After a tomodensitometry planification, the biometry of the five metatarsal bones was done by X-ray and CT scan by measuring each metatarsal length (1 to 5) in the sagittal, horizontal and coronal plans and angles. The average amount of lengthening was 17 mm for the third and 15 mm the fourth at the end, 40% of the original length (range, 36 to 44%). In the same time, we treated hallux valgus by osteotomy. Decrease of motion and joint deformity did not occur. The control of the CT scan allowed choosing the real orientation and length of the two metatarsal bones to obtain an adequate parabola. Measurements with CT scan were more reliable than Xray.

The operative corrections of brachymetatarsia may sometimes lead to complications and lengthening procedure is the best choice [1]. One-stage lengthening with an interpositional bone graft or gradual lengthening by callotasis are the two most widely used techniques [2,3]. For brachymetatarsia, numerous variables must be assessed, including the number of rays affected, the associated deformities, the soft-tissue contracture, and the tension of the skin. The measurement of the length by a preoperative CTscan has not been used before [4].

Our aim was to evaluate tomodensitometry planification and metatarsal lengthening by external fixator.

We report the case, with informed consentment, of 10-year-old girl and her family with a congenital bilateral deformity of the forefoot including brachymetatarsia of the third and fourth rays with hallux valgus (Figure 1). The genetic investigation found no mutation of collagen 2 (spondylo epiphyseal dysplasia). The indication was painwearing shoes, and cosmetic and psychological concern. Figure 1: Dorsal view of a bilateral congenital deformity of the feet with hallux valgus and brachymetatarsia.

The examination of the left and right foot showed a normal walk and a podoscopic flat footprints grade 1 without metatarsalgia. There was no pain during examination with ankle range of motion 45°, dorsiflexion and 50° plantar flexion. The second, fourth and fifth metatarsal ranges of motion were normal. The motion of the third metatarsophalangeal joint of the left foot was 0° of active dorsiflexion and 45° of plantarflexion. Bilateral hallux were entirely reducible with 35° of dorsiflexion and 40° of plantar flexion.

On charge X-ray with inclination of 10° dorsoplantar, we noted brachymetatarsia of the third and the fourth ray associated with hallux valgus (Figure 2) and, on a sagittal plan, a bilateral posterior talocalcaneal coalition. The clinical metatarsophalangeal angle of the left first ray was 50° on X-ray. We performed a bilateral CTscan analysis in discharge of the feet before surgery (Figure 3), and pictures in DICOM format were analyzed and biometry of the five metatarsals by the Myriam® specific software (Intrasense®CE). The AOFAS score was performed. Figure 2: Xray of bilateral brachymetatarsia of the third and fourth rays. On CT scan, we measured each metatarsal length (1 to 5) in the sagittal and horizontal plans, on the coronal plan the torsional angle of the metatarsal, the first metatarsophalangeal angle M1P1 and the first and second metatarsal angle M1M2 of each foot. The results allowed us to decide the adequate lengthening of all metatarsal bones to obtain a good metatarsal parabola.

The operative technique for the left foot was to lengthen the third and the fourth metatarsal (17 and 15 mm), to shorten the second metatarsal (8mm) and treat the hallux valgus using the scarf procedure. The coalition was not treated at the same time.

The surgery was performed on the left foot (tourniquet 200 mmHg). The dorsal approach of the diaphysis of the third and the fourth metatarsal was done under periostal. Four self-tapping 2 mm threaded pins were inserted in the diaphysis using a special guide. The pins were implanted at 5 mm of the adjacent joints (metatarsophalangeal and cuneometatarsal). Between 2 pins, the distance was 8 to 10 mm. Transverse medial osteotomy was carried out between the second and third pin. The proximal and distal fragments were held in the right position by an unilateral minirail external fixator (Orthofix® M-100) without axial pin. Two external fixators were positioned on the third and the fourth metatarsal bones. No distraction or bone interposition was made on the third and the fourth metatarsal. The periosteum was sutured with release of the extensor digitorum brevis tendon. Shortening osteotomy of 3 mm of the second metatarsal was performed with an axial pin osteosynthesis. Hallux valgus was treated using the scarf osteotomy technique. Non weight bearing on crutches was allowed until 3 months after surgery and the patient was discharged from the hospital 10 days later. Distraction began 10 days after surgery by the girl herself to obtain a lengthening of 0.5 mm every 12 hours until reaching 17 and 15 mm respectively for the third and the fourth metatarsal. Callus formation around the osteotomy gap was checked radiographically every 2 weeks (Figure 4). Distraction was continued until the third and the fourth metatarsal and toes were in normal position to reach target length at one month. A control CT scan was performed at 6 months.

In postoperative care, there was no complication and the pain was treated by oral antalgic. Outcome was favorable with a correct psychological acceptation of the treatment. The final increase in length was 17 mm for the third and 15 mm for the fourth metatarsal. The axial pin of the second metatarsal was removed at the end of the third week. The external fixators were removed under anesthesia 60 days after bone healing (Figure 5). 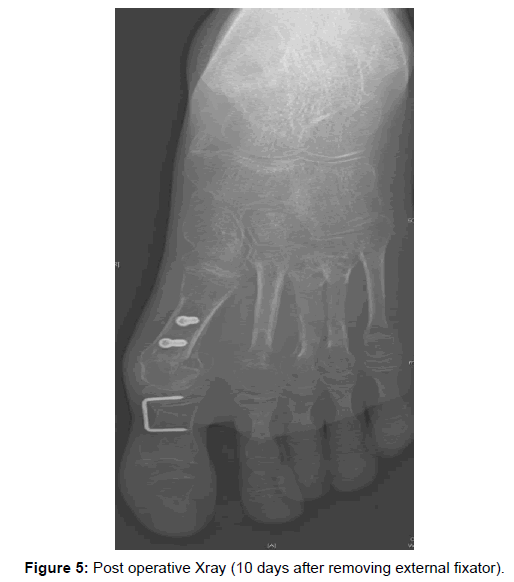 Brachymetatarsia is chiefly a cosmetic problem due to the deformity of the forefoot. Surgery is not performed before 10 years of age, waiting for more bone growth and better acceptation from the children.

Authors [2] performed one-stage lengthening using intercalary autogenous bone graft. Choi et al. [2], showed the advantages of onestage lengthening with intercalary bone graft over gradual lengthening by callotasis including shorter period of consolidation, lesser scar and better psychological acceptation. The disadvantages included donorsite morbidity and neurovascular impairment by rapid stretching. It was difficult to obtain the metatarsal parabola owing to the initial length with the graft. Moreover, intraoperative gradual distraction was stopped by the high tension exerted to surrounding soft tissues. However, the same authors believed that lengthening by callotasis was more effective and safer when multiple and longer lengthening were required. Giannini [4] reported 41 feet (29 patients with a mean follow-up of 5 years) with one-stage metatarsal lengthening by allograft interposition and reported five cases of lack of lengthening with regard to the metatarsal parabola. Recently, Desai [5] proposed a modified surgical technique using bone graft with a lengthening scarf osteotomy. This osteotomy secured the fixation, decreased the chance of shortening post operatively and did not require another surgical time for removing a wire. The problem was the limitation of distraction (9 mm).

The procedure of leg progressive lengthening was firstly described by Ilizarov et al. [6] with many advantages [7]. For metatarsal, this procedure minimizes the stress of soft tissues such as neurovascular ones and adapts the length when the metatarsal regains [8–13]. The increase in length of the metatarsal bones was adequate for correction of the deformities, and the strength of the elongated bones was sufficient to withstand normal sport activities [14,15]. The psychological and emotional aspects of the external distraction must be considered [2] as well as the long time for bone healing, management, limitations, hypertrophic scar. The reported complications during callus distraction were subluxation of the metatarsophalangeal joint, flexion deformity of the toes, limitation of the range of motion, premature healing, callus fracture, deviation of the metatarsal [1,8,12,13,16–18]. To prevent deformity, a temporary axial pin fixation was used [16]. Kim et al. [19] proposed the association of shortening an adjacent bone if the target length is more than 15mm in order to reduce the period of treatment and to avoid complications.

For lengthening short metatarsal bones, the callotasis method seemed preferable to other procedures requiring bone grafts [17,20-22] or artificial implants [23-25] because of the complexity of the deformity with hallux valgus. There was no sign of bone resorption or reshortening at 3 months follow-up. Scher [26] modified the surgical technique with external fixator using an axial transarticular K-wire incorporated in the external fixator in one case. The principal advantage was to avoid complications like pin infection. However, this procedure needs a good cooperation from the patient. The choice of the technique depends on the length to obtain.

For Kim et al. [3], the preoperative plan permits to choose the technique for lengthening or shortening if the target length is more than 15mm. So they used a dorsoplantar radiography to determine the site for bone shortening after analysis of the metatarsal and phalanx. We think that the X-ray measurement method was inaccurate. CT scan analysis obtained an exact length. The measurement by CT scan was superior to X-ray. With our technique it was important to planify exactly the target lengthening and the correction of all the deformations. The CT scan allowed a complete pre-evaluation of the complex deformity and a real length evaluation comparatively to the X-ray, which was insufficient for medial metatarsals. Giannini [4] measured the length needed to restore the metatarsal parabola on a dorsoplantar radiography. Therefore they explain that CT and MRI are more reliable but too expensive. In our case, the CT scan allowed to planify precisely the target length and to check the associated deformation. Lida and Watanabe [27] used 3D CT data to planify the correction of brachymetatarsia (22 year old woman) to build a model of graft with hydroxyapatite for the target lengthening. The disadvantage was the irradiation. The result was According to the AOFAS score the result was 22 points preoperative and 77 points at the last followup. The mean postoperative AOFAS score was 88 points (74-96 points) for Giannini [4] with a percentage of improvement of 76%.

The use of CT scan with preoperative planning of target length permits to define more precisely the length before and during elongation. The external fixator is the best technique for elongation over 15mm because it is more effective and can be used by percutaneous technique. We recommend a correction of the complex deformity of the forefoot in one-stage surgery using callotasis lengthening for brachymetatarsy. Moreover, our data suggest that a CT scan analysis of the complex deformity before beginning correction is necessary to detect all the associated deformations and to make a precise planification. The complex deformity can be corrected in one stage surgery but needs frequent postoperative care.