Copyright: © 2015 Saawarn S, et al. This is an open-access article distributed under the terms of the Creative Commons Attribution License, which permits unrestricted use, distribution, and reproduction in any medium, provided the original author and source are credited.

Plant secondary metabolites (SM), which frequently occur as glycosides, constitute large pool of structures which are valuable for medicinal chemistry and molecular pharmacology because of their inherent biocompatibility. Despite rich ethnopharmacological tradition of their application, glycosides as individual chemical entities are not very frequent as therapeutic agents, and their bulk availability is usually low. The current potential of chemical synthetic methods of glycosylation is discussed, in context of structural diversity needs in contemporary drug discovery programs. Newly designed procedures for glycosylation, which rely on transition metal catalysis, together with already established methods of chemical ligation (click chemistry), are well suited for elaboration of new semisynthetic SM libraries based on chemical glycosylation and glycorandomization principles

Plants have served as sources of medicines since prehistorical times and through tradition of ethnopharmacology, as well as through advances of modern pharmacognosy, still remain of great importance in manufacturing raw materials, as well as active pharmaceutical ingredients (APIs), for contemporary industry [1-3]. However, because of an uneven distribution of wealth, there is a dramatic difference in how these seemingly renewable botanical resources of biologically active compounds, known under collective name of secondary metabolites (SMs) are exploited in different parts of the world. According to recent estimates, up to 80% of human population relies in their principal healthcare on herbal resources, following traditional indications, including such holistic systems as Ayurveda [3,4]. Western medicine on the other hand has developed highly sophisticated scientific methods, including molecular pharmacology, for study of xenobiotic influence on human physiology. The second approach has led to discovery of innumerable secondary metabolites, eventually available in form of pure chemical entities, which were applied in the past as poisons, dyes, drugs and hallucinogens, but are seen by modern science as valuable biochemical probes to study fundamental processes of life: as receptor interaction modifications, enzyme inhibitions, gene expression modifiers, signal transduction enhancers, etc. [5,6]. The results of plant resources mining in recent decades have been admirable in terms of gain of new medicines such as taxanes, Vinca alkaloids, galanthamine, huperzine, podophylotoxin, epothilone, etc., but also have demonstrated considerable difficulties in securing adequate long term supply of botanical raw materials for drug development and manufacturing. Nature offers unsurpassed structural diversity for lead compounds and new drug design, but not necessarily best indication concerning starting material for sustainable process development. The new natural product based drugs mentioned above, when examined as API manufacturing process development case studies, uniformly reveal inefficiency of the original botanical sources and necessity of a new method development for raw material supply, based either on chemical synthesis or on biotechnology [7].

Glycosides of secondary metabolites as an inspiration and challenge; saponin example

Modern glycobiology points out that glycosyl transfer is one of the most common biological processes being carried out in living cells, on particularly massive scale in the Plant Kingdom. Apart from assembly of such construction material as cellulose and storage polysaccharide as starch, mono and oligomeric sugar moieties are being covalently attached to majority of biological molecules, as proteins, nucleic acids, lipids and also to variety of low molecular weight secondary metabolites as isoprenoids, acetogenins and phenolics of various origin. Such secondary structural modifications, which play profound biological roles by influencing molecular lipophilicity balance and membrane permeability as well as by assisting intracellular compartmentalization and trafficking through utilization of an active transport, generate a large number of compounds, rendered with a fundamental feature of utmost value for drug development – they are generally biocompatible and usually exhibit better bioavailability than parent molecules, prior to glycosylation [1,3,8]. A number of glycosylated natural products is difficult to assess since even estimates of plant species number vary considerably (majority of sources give 200 – 250 thousand; ca 85 000 plant species have recorded medical uses thus far) [1,4]. Microbial sources of glycosides may contribute significantly, particularly in antibiotic category. Although glycosides, natural and synthetic, have attracted attention of medicinal chemists for quite some time [9,10] there is no doubt that thousands of presently known glycosides of natural origin represent only a minute fraction of possible molecular diversity, considering large combinatorial power of multifunctional natural sugars, which can even be further enhanced by chemical synthetic modifications [10,11]. In order to bring closer some complex features involved in rational exploitation of glycosylated pool of secondary metabolites, we would like to discuss their representative category, namely steroidal and terpenoid saponins, including cardiac glycosides which are usually excludes on the ground of distinct biological activity. Remarkably, application of these compounds as medical remedies is well documented for well over 200 years, and their biological activity study are known to form a cornerstone of modern pharmacology [12]. Although saponins have a very long record of structural and pharmacological studies, there are a number of new findings accumulated over last decades, resulting from methodical advances in separation techniques and biochemical testing, which call for revision of clichés like: “all saponins are haemolytic” or “aglycons of terpenoid saponins are devoid of biological activity”. Conversely, many promising new drug leads have been generated by chemical modifications of terpenes from oleanane, ursane and lupane groups [13] and native saponins as well as their congeners continue to find application in vaccine design, as immunoenhancers [14]. In addition, well established drugs, like cardiac glycosides (CG) primarily isolated from Digitalis plant, traditionally used for treatment of circulatory disorders, gained a new ground for recognition as mammalian hormones, and also for repositioning to a new therapeutic category, as possible anticancer drugs, based on their cytotoxic and antiproliferative activity in numerous models of animal and human cancers [15]. These new developments clearly indicate a need for support and enhancement in form of new chemical entities for biological activity testing, which are structurally related to the lead compounds, such as ouabain, digoxin, digitoxin, oleandrin or lanatosides, and at present practically only chemical synthesis can fulfill such requirement. During classical period of collecting structural information about cardiac glycosides, first summarized by T. Reichstein [16], numerous attempts have been made to obtain these natural products by chemical synthesis, in order to confirm their proposed structures. The first successful attempt of this kind, synthesis of digitoxin by Wiesner [17] required modification of cardenolide aglycone structure prior to glycosylation, and special efforts to secure formation of the required β-D-glycosidic bond in Koenigs-Knorr glycosylation of 2-deoxypyranoses, which are notorious for difficult control of stereochemical outcome of the anomeric leaving group substitution reactions [18,19]. The total yield of the trisacharide glycosidic product was very low.

As newer methods of chemical glycosylation were developed, R.R Schmidt’s anomeric imidate exchange procedure has become a golden standard, especially in application to complex and multifunctional examples [20,21] (Figure 1). The method relies on generating alkoxyl anion from protected 1-OH reducing sugar, followed by its addition to activated carbon – nitrogen triple bond, with formation of imidate ester analog. Such glycosyl donors are chemically stable and tolerate wide array of saccharide protection; their activation into an anomeric leaving group requires Lewis acid interaction. The procedure designed around 1970 has evolved over years by modification of halogenated acetonitrile component, as well as activator, to allow for better yields and selectivities [22,23]. The scheme below underlines generality of the procedure, in which O-, S-, N-, C-, and other heteroatom glycoconjugates can be obtained by using proper nucleophilic substrate, while stereoselectivity of the anomeric exchange is controlled chiefly by features of the C-2 substituent. Among many successful syntheses of complex glycosides achieved by this method, oligosaccharides, anticancer steroidal glycosides OSW-21 [24] and triterpenoid saponins should be mentioned [15-26]. 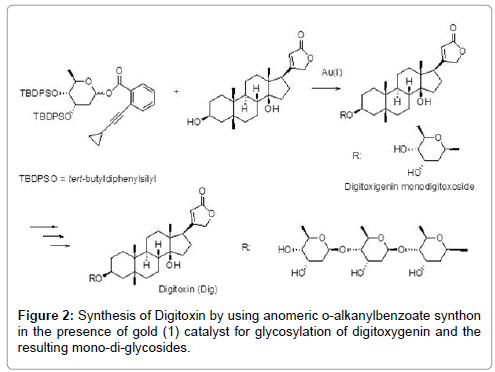 Figure 2: Synthesis of Digitoxin by using anomeric o-alkanylbenzoate synthon in the presence of gold (1) catalyst for glycosylation of digitoxygenin and the resulting mono-di-glycosides. 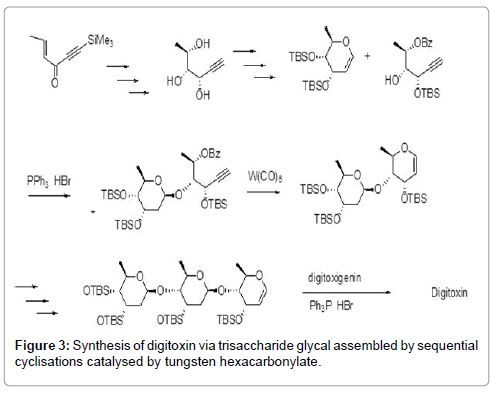 Although these methods of chemical glycosylation represent further advances in particular cases of glycoconjugation, they are no match for efficiency of biocatalytic glycosyl transfer, performed in the presence of proper energy sources and biofactors, by glycosyl transferases [30]. These enzymes are quite abundant in Nature, comprising nearly 200 families, which differ greatly in substrate specificity – many are promiscuous enough to glycosylate any given hydroxylic substrate. Nevertheless, although extremely efficient in plants, there are only isolated cases when such biocatalytic transformations have been successfully developed into technical scale process in a cell-free environment. Attempts to use plant tissues or microbial fermentations for biotechnological glycosylations also met only with limited success beyond laboratory scale [31].

Relatively recently, the reaction depicted as chemical ligation, comprising 1,3-dipolar cycloaddition between terminal acetylenic group and azide functionality, commonly known as click chemistry [32] has found many application for glycoconjugation reactions, which do not necessarily involve an anomeric linkage. Many more possibilities exist, exploiting synthetic linkers in which a sugar consists a part of a scaffold having reactive group designed for conjugation with selected function of a molecule substituting for aglycone. Such reactions do not produce true glycosides, but constructs which can be called glycomimetics. Being structural analogs of natural glycosides, they can come handy as molecular probes in which all parts of the construct can be variable in order to test structure-activity relationship hypotheses. Thus, Thorson glycorandomization method, which is operationally simple and secures quick generation of new compound libraries using unprotected reducing sugars, is ideally suited for testing biological response to variability of a glycon structure [33].

Naturally occurring glycosides provide invaluable inspiration for drug design, and almost endless possibilities of generating secondary structural variations by change or modification of the glycon part, make this field of new drug discovery highly attractive [34,35]. It has to be realized that scope of chemical glycosidation of alcohols and phenols abundant in plants as potentially pharmacophoric secondary metabolites, is no longer limited to classical anomeric activation methods, utilizing properly protected synthons derived from natural monosaccharides. A real breakthrough in glycosylation methodology stems from total synthetic approaches, which adopted achievements of contemporary enantioselective chemical catalysis to preparation of sixmembered oxygen heterocycles, thus advancing de novo preparation of pyranoses from mere synthetic curiosity to practical applicability [36-38] (Figure 4). Principal unsaturated pyranosides, offering full range of D- and L- monosaccharides, including 2,6-dideoxyhexoses critical for synthesis of cardiac glycosides and their analogs, can now be obtained from simple derivatives of furan by use of Noyori catalysts, through Achmatowicz rearrangement. This development, together with newly designed methods of glycorandomization and through-spacer syntheses of glycomimetics open new opportunities for exploiting secondary metabolites of nearly all structural categories, through their derivatization with sugars and also specially designed sugar containing synthons [25,39-42]. 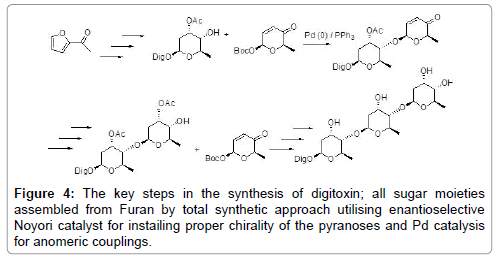 Figure 4: The key steps in the synthesis of digitoxin; all sugar moieties assembled from Furan by total synthetic approach utilising enantioselective Noyori catalyst for instailing proper chirality of the pyranoses and Pd catalysis for anomeric couplings.