Copyright: © 2013 Kachouie NN, et al. This is an open-access article distributed under the terms of the Creative Commons Attribution License, which permits unrestricted use, distribution, and reproduction in any medium, provided the original author and source are credited.

Detection of abrupt changes, including inflection points, in the observed noisy signals is an important and challenging problem in engineering and science. Several methods have been proposed to solve this problem and proved to be successful for specific applications. Yet, there is demand for new and general approaches that are applicable to broader range of applications. The change point detection problem can be divided into two categories; i) sequential or on-line, and ii) batch or off-line. In on-line methods, the observed data are inspected sequentially to catch a change as soon as it occurs. These methods are mainly used in quality control, real time surveillance & vision systems, and real time fault detection in computer networks [1-6]. In offline methods the entire data set is observed and can be processed at once. The off-line problems are growing fast and have attracted many researchers in computational biology and biostatistics as well as offline computer vision applications [7-14]. In previous work [15,16], often Cross Validation (CV) is used to select the bandwidth to locate the discontinuities in the observed signal including inflection points, change points, jumps and valleys. Discontinuities in [15], assuming an unknown number, are located by detecting the zero crossing of the second derivative and the local maxima of the first derivative while CV is used to estimate bandwidth parameters. Bootstrap is used in [16] for designing a nested CV method for detecting the change points by finding the local maxima of the first derivative while considering the number of change points is unknown.

The proposed method is discussed in the next section by describing local polynomial regression, inflection point detection, and optimal bandwidth selection. The results are then demonstrated, compared with cross validation are discussed at the end.

Suppose that n pairs of observations

where z is a point in a neighborhood of s. We use least squares to estimate the polynomial coefficient vector .

The estimated polynomial coefficient vector is

is obtained by minimization of the least square problem

where si is a point in a neighborhood of s,

is a kernel with bandwidth γ

. The variance of this estimator for independent noise that is of interest here is

can be estimated by the inner product of Y with the second row, third row, and (P+1)th row of L respectively.

crosses the zero line from being positive (

< 0) and the first derivative has a local maximum (

and its associated standard error can be computed by

The negative inflection point can be identified in a similar way where the second derivative changes sign from negative to positive. As illustrated in Fig. 1, the standard error of the estimated inflection point location is approximated by

where D is the identified inflection point location,

is the standard error of the estimated second derivative at the inflection point based on (12), and

is the estimated third derivative at the inflection point, computed in a similar way as (9) and (11).

Conventionally, the optimal bandwidth is chosen using the leaveone- out cross validation score that satisfies the constraint

is the set of zero down-crossings of the second derivative. Equation 17 ensures that the number of positive inflection points of the smoothed curve applying bandwidth γ is one.

The proposed method is applied to a simulated sigmoid function which is corrupted by adding different levels of independent Gaussian noise. For comparison, first we show the application of the regression-based inflection point detection where the bandwidth is selected by cross validation. The results obtained by applying the proposed constrained bandwidth selection are then presented. Finally the performance is quantified by running several hundreds of simulation instances.

was simulated and independent Gaussian noise with

Bandwidth selection by the proposed method

To avoid detecting multiple false inflection points, the proposed method was applied to select the optimal bandwidth while ensuring to have only one inflection point in the smoothed curve. Independent Gaussian noise with different levels

= 1665 (very high noise) was added to corrupt the signal. The noisy sigmoid was then estimated using the non-parametric regression where the bandwidth was selected by the proposed method (Figure 5). Regardless of the noise level, the significant inflection point was closely estimated (Figure 5 (Right column)). Figure 6 further illustrates the inflection point detection and the estimation error under high noise conditions. The confidence interval was computed by

and is superimposed in red where the standard error (

) of the smoothed curve was computed using (10). For high level of Gaussian noise with Performance of the proposed method

The performance of the proposed method is assessed by comparing the location of the identified inflection point vs. the true inflection point location (D = 5; r(D) = 0.5) through several hundred simulations where the sigmoid 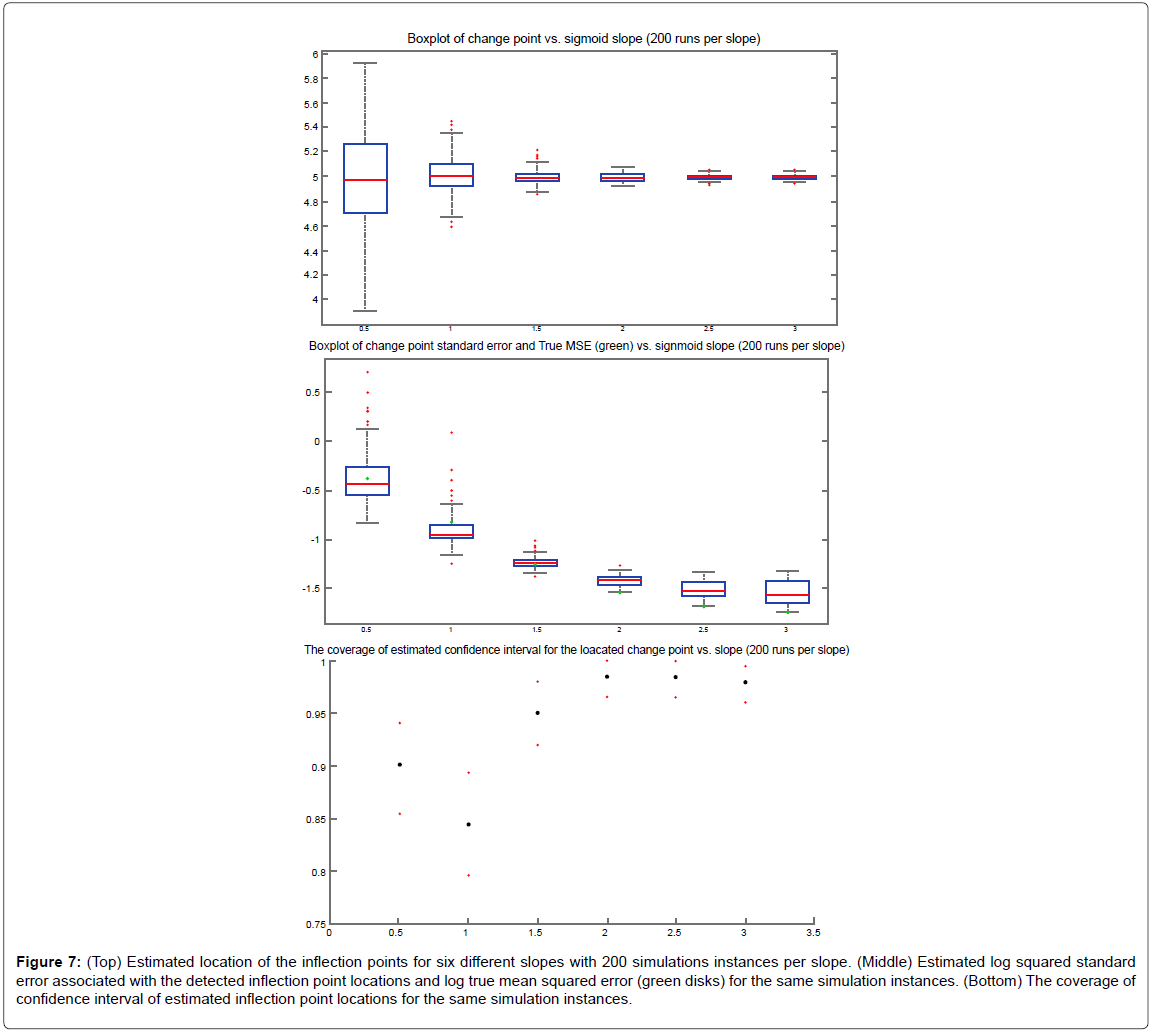 The point-wise confidence interval of the coverage was then estimated (red disks) for each slope using the Binomial distribution applying the number of simulation instances (Figure 7 (Bottom)).

Figure 8 illustrates the basic mechanism under a low noise with Note from Figure 6 that the confidence bands do not necessarily cover the true function. In other words, the estimation of the function is biased. However, this is not a concern in our case because our interest is in estimating the inflection point location, not the underlying function. The gain in accuracy in estimating the inflection point location is worth the extra bias in the estimation of the function.