Copyright: © 2016 Ramieri A, et al. This is an open-access article distributed under the terms of the Creative Commons Attribution License, which permits unrestricted use, distribution, and reproduction in any medium, provided the original author and source are credited.

Methods: We operated 22 thoraco-lumbar and lumbar degenerative deformities, characterized by a sagittal compensated (hidden) imbalance (SVA<50 mm), with or without coronal deformity, and distinguished according to the SRS-Schwab classification. All patients were submitted to X-ray screening during pre, post-operative and follow-up periods.

Results: Mean age was 65.3 (50-74; M/F 1: 4). Sixteen deformities were type L and 6 type N. Loss of LL was moderate (+) in 14 cases and marked (++) in 8. We performed 39 XLIFs, 8 TLIFs, 32 SPOs. Complication rate was minimal. Pelvic tilt, lumbar lordosis, sagittal vertical axis and thoracic kyphosis improved (p<0.05), post-operative values were similar to those pre-operatively calculated in 90% of cases and clinical follow-up (mean 20.5; range 18- 24), scored using VAS and ODI, was satisfactory in all cases, except for two due to sacro-iliac pain.

Conclusion: Current follow-up does not allow definitive conclusions. However, the surgical approach reported seems to be a viable choice usable in these compensated adult deformities, avoiding risks and complications of more aggressive pedicle subtraction osteotomies.

American Spinal Cord Injury Association defines spinal cord injury ‘as an insult to the spinal cord resulting in a change, either temporary or permanent, in its normal motor, sensory or autonomic function’ [1].

Most commonly affected age group with spinal cord injury is between 20-29 years which accounts for 34.18% of injured group and remaining 68.54% fall under the age of 40 years. Mean age group for injury remains at 34.4 years [2].

Spinal cord injury causes paralysis of upper and lower extremity and can lead to chronic respiratory insufficiency due to paralysis of respiratory muscles which are innervated below the level of lesion [3].

During normal respiratory biomechanics the diaphragm contraction can elevate the rib cage and increases intra-abdominal pressure. In patients with spinal cord injury, the abdomen becomes highly compliant, reducing the effectiveness of diaphragm action on rib cage. This can lead to smaller-than-normal increase in intraabdominal pressure during inhalation [11].

Patients suffering with tetraplegia and high paraplegia suffer with mucus retention and atelectasis due to ineffective cough, as expiratory muscle function is more compromised than the inspiratory [12].

High level of evidence literature has supported use of IMT in adults with stable Chronic Obstructive pulmonary disease (COPD) by targeted inspiratory resistive or threshold IMT [16].

As per Leith and Bradley normal individuals can improve their ventilatory muscle strength and endurance with specific training program of repeated static maximal inspiratory and expiratory maneuvers against obstructed airways [18].

Ethical clearance was obtained from the Institutional Ethical committee of Indian Spinal Injuries Centre. A sample of 45 individuals diagnosed with spinal cord injury (AIS-A and AIS-B) participated in the study. Few subjects were selected from Indian Spinal Injuries Centre hospital and few others from Research and Referral Army hospital, New Delhi.

Individuals were recruited in the study based on following inclusion criteria: Individuals diagnosed with traumatic SCI of AIS-A and AISB, minimum of one year of span in injury. Subjects were excluded from the study on the following basis: subjects with pre-existing lower limb pathology, deformity or musculoskeletal problem or any joint pain and any other neurological disorder and health condition that preclude participation like uncontrolled hypertension, COPD, osteoporosis or cardiac problems, peripheral neuropathy and subjects diagnosed with any systemic illness.

A pre and post-test between group study designs was used. Participants were then explained about the procedure of the study and written consent was obtained from each participant. Participants were randomly divided into two groups i.e., Group 1 (Inspiratory muscle training) and Group 2 (Breathing training). Participants were tested for sprint timing through Shuttle test and inspiratory maximum pressure via inspiratory monometer apparatus; Borg perceived exertion scale is used for measuring exertion level. All the measurements were followed after every two weeks during protocol completion.

Participants in Group 1 received Inspiratory muscle training (IMT) for six weeks two times a day. Each session lasted for approximately 5 min and warm up activity was taught prior to sprinting. Post results were obtained after every two weeks.

Participants in Group 2 received breathing training exercise program for six weeks three times in a day. Each session lasted for approximately for 10 minutes. At the end of six weeks, participants were assessed for sprint performance and PiMax values.

The SPSS 21.0 statistical package (SPSS Inc., Chicago IL, USA) was used for all the statistical analysis. Means and standard deviations were compared for all variables. A two-way analysis of variance with repeated measurements was used with as within-subject variable training (pre and post) and as between subject variable group (IMT vs. BT). Significance was assumed at P ≤ 0.05. A Bonferroni post hoc test was applied to determine the location of any significant main effects.

In the present study a total of 30 wheelchair recreational players with high thoracic spinal cord injury were recruited. The study consisted of majority in male participants and few female due to unavailability. The mean and SD of age (year) of the inspiratory muscle training group was 40.50 ± 9.70.

The data analysis for post intervention values of experimental group 1 (IMT) and group 2 (BT) was also done using independent T-test and PiMax value was measured, showed significant changes at the end of 6 weeks. 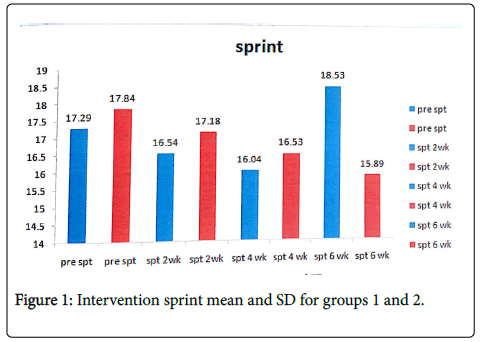 Figure 1: Intervention sprint mean and SD for groups 1 and 2. 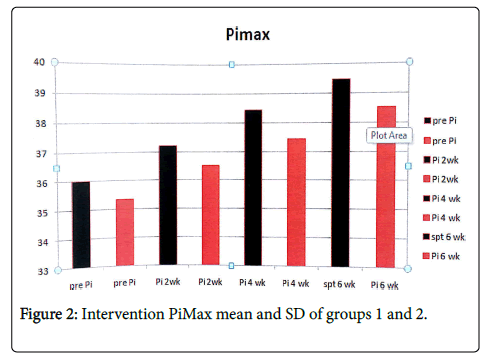 Figure 2: Intervention PiMax mean and SD of groups 1 and 2.

This study deals with the effect of inspiratory muscle training versus breathing training on sprint performance and PiMax on higher thoracic spinal cord injury patients, participants informed consent was obtained before data collection, thirty recreational basketball players participated in the study. Disabilities of the participants included only SCI, with minimum time of disability to one year.

The high thoracic spinal cord injury patients were recruited of ASIA-A and ASIA-B, as per international standard for neurological classification of spinal cord injury revised 201, ASIA impairment scale [2]. Injury to high thoracic spinal cord leads to highly compromised respiratory system due to the affection of respiratory muscles [22]. Higher lesions result in greater denervation of expiratory and inspiratory muscles thus lesions of cervical and upper thoracic regions results in greater respiratory distress [23]. As seen in able bodied individuals evidence suggest use of exercise methods to improve cardiovascular health in Spinal cord injury patients. It is important to use exercise methods as physical inactivity in SCI patients can lead to secondary conditions such as cardiovascular disease, diabetes, osteoporosis and obesity [23].

Normal functioning of respiration involves muscles of chest, back and abdominal area. Dyspnoea during sprinting among wheelchair recreational basketball players can be manage with the good respiratory function [22]. Lack of sympathetic innervations of the heart there is a loss of sympathetic neural control which can be accounted for the lowest Vo2 Pk recorded in above T1-T6 level of injury [6].

The primary findings of this study indicates significant effect of IMT on sprint performance and PiMax but during sixth week the effect remained static as the majority of participants develop maximum inspiratory pressure and training with IMT on higher level (4/5) made them to finish the training early before reaching the level 9. There was an adaptation to the equipment resistance.

This indicates that even minimal intensity IMT is sufficient to improve respiratory muscle function because IMT predominantly concerns inspiration; most previous studies have focussed on maximum inspiratory pressure rather than maximum expiratory pressure. Grandas et al. noted that dyspnea in chronic SCI patients may be because of impaired ventilatory muscle function and the adaptive strategies are used to alleviate the problem [9].

Similar significant improvements in the sprint and PiMax were seen in breathing training group. This conclude that pulmonary rehabilitation exercise protocol prescribed to the SCI patients with reduced pulmonary function is very much effective to provide a positive outcome. Pulmonary exercises were simple and effective therapy without any need for purchase of any sophisticated instrument.

Only when such respiratory muscle training is sustained in a prolonged way it will help inducing changes that may protect against both the development of respiratory muscle fatigue and recurrent respiratory infection. This one of the important factor for wheelchair basketball players as they need an efficient respiratory functional endurance so that they can compete and sustain in the sports for prolonged period of time.

A study conducted in All India Institute of Medical Sciences, New Delhi on efficacy of breathing training to improve the pulmonary functioning tetraplegic and high paraplegic subjects. In this study high paraplegic individuals demonstrated significant improvement in FVC, FEV and maximum inspiratory pressure after six weeks of exercise programme [25].

Our data indicates that both Inspiratory muscle training and breathing training are equally effective in improving sprint timing and PiMax or to enhance the respiratory function in those who had SCI of higher thoracic and might help to decrease the severity of recurring chest infection, a common complication of people with spinal cord injury.

Limitation of study is inclusion of only ASIA-A and ASIA-B. These two groups are separated from each other on neurological grounds and have hence differences among them. Inspiratory muscle trainer should be calibrated and absence of higher resistance level leads to stagnancy of improvement in athletes.

Our data indicates that both Inspiratory muscle trainer and breathing training have significant effect on PiMax (p ≥ 0.001) and sprint (p ≥ 0.001) in wheelchair spinal cord injured paraplegic patients. Limitation in further improvement of IMT group is attributed to adaptation of subjects to certain last fixed level i.e., 9.