Copyright: © 2016 Lovell S, et al. This is an open-access article distributed under the terms of the Creative Commons Attribution License, which permits unrestricted use, distribution, and reproduction in any medium, provided the original author and source are credited.

Noonan Syndrome (NS) is an autosomal dominant condition affecting 1 in 1000 to 1 in 2500 individuals worldwide. While congenital heart defects are prevalent in 1% of the general population, 80% of people with NS have some form of congenital heart defect. We report a 26-year-old pregnant female with NS who developed pre-term labor and acute cardiopulmonary decompensation due to underlying hypertrophic obstructive cardiomyopathy (HOCM).

Noonan Syndrome (NS) is an autosomal dominant disorder with complete penetrance and variable expressivity that affects 1:1000 to 1:2500 live births. It is characterized by facial dysmorphism, short stature, heart defects, skeletal malformations, bleeding diatheses, and mild mental delay. Congenital cardiac defects are encountered in more than 80% of cases, with the majority of cardiac defects being pulmonary stenosis and hypertrophic cardiomyopathy [1]. Literature remains sparse with regards to management of NS in pregnancy.

A 26-year-old G2P0010 at 33 4/7 weeks with NS presented for evaluation of pre-term contractions. She had mild mental delay, webbed neck, short stature, mild pulmonary stenosis, paroxysmal supraventricular tachycardia, hypertrophic cardiomyopathy, and history of left ventricular septal myectomy via sternotomy at 9 months of age. She received a course of betamethasone for fetal lung maturity and Nifedipine for tocolysis. On hospital day 5, she experienced severe shortness of breath. EKG showed supraventricular tachycardia, echocardiogram revealed an ejection fraction of 36% with severe diastolic dysfunction, and chest x-ray was consistent with pulmonary edema and bilateral effusions (Figure 1). She was started on diuretics and transferred to our facility for higher level of care [2]. 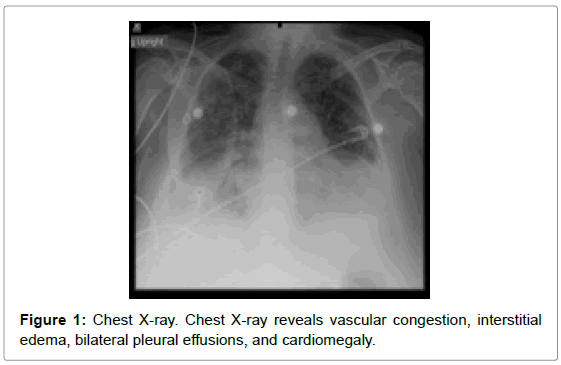 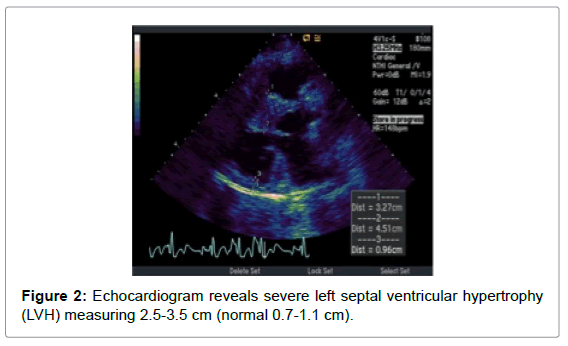 A multidisciplinary meeting including cardiologists, perinatologists, anesthesiologists, neonatologists, and geneticists was held to formulate plan for care. A comprehensive genetic testing panel was sent for the mother including Noonan, LEOPARD, Cardio-Facio-Cutaneous, and Costello syndromes that returned positive for heterozygous S257L mutation in the RAF1 gene mutation consistent with NS.

On hospital day 10, she spontaneously entered active labor at 34 6/7 weeks that required primary low transverse cesarean section and bilateral tubal ligation under general anesthesia for category 2 fetal heart rate tracing means Category III FHR tracings are abnormal and indicative of hypoxic risk to the fetus and possible academia. They include either no baseline variability or the presence of recurrent late decelerations, variable decelerations, bradycardia or a sinusoidal pattern. According to a study by Jackson et al., Category I and Category II patterns are common in labor and Category III are unusual. Perinatal morbidity is associated with an increase in time in Category II during the last two hours of labor. Placental abruption was noted at the time of delivery with estimated blood loss of 2 liters. She delivered a viable female with APGARS of 2, 7, 8, weighing 2135 g.

Neonatal echocardiogram revealed moderate right ventricular outflow tract obstruction and moderate to severe concentric left ventricular hypertrophy. The neonate was started on beta blocker therapy immediately; she later required exploratory laparotomy and correction of intestinal malrotation on day of life 5. The mother underwent placement of a single lead implantable cardioverter defibrillator which she tolerated well; she was discharged to home in stable condition on post-operative day 6.

This case underscores the importance of preconception counseling, genetic testing and evaluation, optimization of cardiac status prior to and during pregnancy, as well as discussion of invasive testing in early pregnancy. Once pregnancy is established, a multidisciplinary team including obstetrician, cardiology, anesthesiology, genetics, and neonatology should be involved in treatment planning [5]. Serial fetal growth scans are also recommended [6]. General considerations for management of patients with NS and HOCM are to avoid decreases in preload such as blood loss, acute hypovolemia, vasodilation or long periods in supine position.7 It is best to avoid inotropes and vasodilators as they shorten left ventricular diastolic filling period, decrease preload, and tend to exacerbate outflow obstruction [7,8]. It is prudent to maximize medical therapy such as beta blockers to slow down the heart rate, prolong diastolic filling period, and decrease myocardial O2 demand. A controlled planned delivery is encouraged with consideration of an assisted vaginal delivery and adequate analgesia by anesthesiologists with an expertise in cardiovascular hemodynamics to optimize maternal outcome [9,10].