Occupational Asthma (OA) is asthma caused or aggravated by contact with specific substance in professional environment [1]. The incidence of OA is closely associated with industrial development. OA has becomed a very common occupational disease in many industrialized countries [2]. According to the study, in recent years, more than 300 kinds of OA’s sensitizer have been found, and increased to more than 400 by 2014 [3] such as the rubbe, plastic, adhesive, textile, leather, oil paint, pigment, wood processing, cleaning, nursing, pharmacy, electron, printing, photographing, smelting, chemical engineering, msynthon, farm chemical, poultry rearing, grain, foodstuff, beverage, crop cultivation, and so on. The sensitizers can be divided into several categories including chemicals, drugs, enzymes, animals, plants, and metallic excitant gas [4].

A 60-year-old woman worked in a bleaching workshop of the flax factory as a dyer for 8 years. During working hours, she experienced the dyspnea and asthma after bleaching, and got to normal after resting every time. One time an accident of sodium hypochlorite pipeline leaking caused the symptoms of dyspnea and asthma again. And by the bronchial dilation test, occupational disease Hospital diagnosed her with “bronchial asthma (caused by acid touching”. With the growing of the age and discontinued her work at the factory, her asthma became worse. She was diagnosed as occupational severe asthma. Furthermore, a series of symptoms would appear after contacting with matters such as paroxysmal cough, white phlegm, gasping, respiratory tract itching, nasal obstruction, runny nose, chest distress, palpitations, insomia and so on. Her past medical history included secondary diabetes, no family history of asthma. Several symptoms that appeared after contact were thorax distention, hyperresonance upon percussion, respiratory phasebased wheezing sound, prolonged expiration, difficult breathing when her condition worsened, profuse perspiration, cyanosis, abnormal abdomen-thorax movement, accelerated heart rate and paradoxical pulse. She was treated with atomized pulmicort three times a day, about 1.5 mg every time. The lung function was improved in 3 days and improved obviously in 7 days. Peak expiratory flow (PEF) was 4.57 L/S from the Pulmonary function test (PFT) FEV 1% had no datas earlier and later it was 78%. By the treatment, the patient’s condition had a certain improvement (Figure 1). 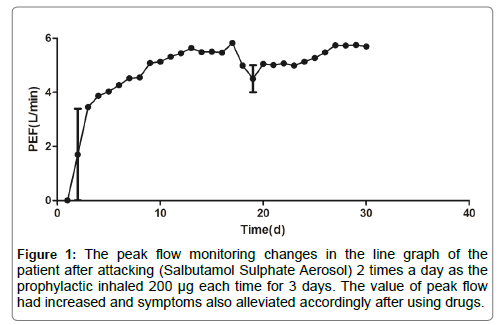 Figure 1: The peak flow monitoring changes in the line graph of the patient after attacking (Salbutamol Sulphate Aerosol) 2 times a day as the prophylactic inhaled 200 Âµg each time for 3 days. The value of peak flow had increased and symptoms also alleviated accordingly after using drugs.

We mainly evaluated the severity of patients’ asthma condition by clinical symptoms and lung function, PEF is a lung function indicator which can reflect the asthma condition very well and expediently [9]. Monitoring of PEF and keeping a recort of asthma diary or painting chart helped evaluate and monitor the severity of asthma. Also, we could find the attack regularity of asthma so that we could prevent it in advance and efficiently reduce the number of acute attacks. It’s helpful for doctors to adjust the therapeutic regimen by offering these information. Previous studies’ methods for monitoring pulmonary function are fussy and inconvenient, but the instrument used in our study would monitor PEF conveniently.

As far as we know, the case we studied is the first time to study the single factor of Sodium hypochlorite. This case verified that the specific contact with Sodium hypochlorite could cause occupational asthma and verify its sensitization. Sodium hypochlorite can induce the level of glutathione which has antioxidative function in a cell and decrease the glutathione’s antioxidant ability thus reducing the cell survival rate. At the same time, Sodium hypochlorite could also cause the disorder of enzymes and electron transport system, destroy the cell membrane, resulting in the cell death. There are researchers that have proposed certain preventive measures about the use of sodium hypochlorite, including closed-loop operation, proper ventilation, operating personnel must receive the specialized training and comply with operation procedures strictly. Operators should wear a direct type gas mask (half mask), protective chemical safety glasses, anti-corrosion overalls, rubber gloves and to prevent steam leaks in the air. Once exposed in the accident workers should leave the scene, breathe fresh air and keep the airway unobstructed. If dyspnea is serious, bronchodilators and Oxygen must be given. If respiratory arrest appears, artificial respiration must be conducted immediately and the patient should be sent to hospital in time [10]. Sodium hypochlorite in the air should be maintained in a level as low as possible, but there are no exposure limit values in occupational settings at present.

In conclusion, because of the extensive use of Sodium hypochlorite in various industries, occupational asthma should be payed more attention by the occupational health management.

Financial/nonfinancial disclosures: None declared. All authors cared for the patient and contributed to this case report. The patient gave informed consent before the peak flow monitor, and gave written consent for the results to be published.

Copyright: © 2017 Wu YH, et al. This is an open-access article distributed under the terms of the Creative Commons Attribution License, which permits unrestricted use, distribution, and reproduction in any medium, provided the original author and source are credited.