Organic Sensor for the Detection of Ammonium

Copyright: © 2017 Laghlimi C, et al. This is an open-access article distributed under the terms of the Creative Commons Attribution License, which permits unrestricted use, distribution, and reproduction in any medium, provided the original author and source are credited.

The electrochemical behavior of ammonium was investigated at Ethylene Diamine Tetra-Acetic -modified carbon paste electrode (EDTA-CPE) in NaCl solution. A method was developed for the detection of the trace of this product, based on their redox reaction. The redox peaks of ammonium were observed around -0.50 V and 0.50 V (vs. SCE) in cyclic voltammetry. Experimental conditions were optimized by varying the accumulation time, EDTA loading and measuring solution pH. Calibration plots were linear under the optimized parameters over the herbicides concentration range 0.8 and 16 mmol L-1, with a detection and quantification limits about 9.38.10-7 mol L-1 and 3.21.10-6 mol L-1, respectively.

Ammonium is the final product of the catabolism of proteins by living organisms, its presence in high amounts in human blood is an indicator kidney disorder, stomach bacterial infection or liver dysfunction. The presence of an excess of ammonium in the environment is an important indicator of pollution [1]. The ammonium cation, NH4+, is the ionized form of ammonia, which can penetrate environmental waters as a product of anaerobic decomposition of nitrogen containing compounds or from waste streams containing ammonia [2]. The ammonium test is performed to control the toxic accumulation of ammonia. It is most commonly used to diagnose and monitor hepatic encephalopathy, a serious liver disease.

Ammonia (NH3) is produced by the body's cells, especially the intestines, liver and kidneys. Most of the ammonia produced in the body is used by the liver to produce urea. Urea is also a waste product, but it is much less toxic than ammonia.

Ammonia is particularly toxic to the brain. It can cause confusion, lethargy, and sometimes coma. The increase in the amount of ammonia in the blood may be due to several abnormalities, such as: congestive heart failure, gastrointestinal bleeding, bleeding - usually in the upper gastrointestinal tract, genetic urea, hyperthermia, leukemia, hepatic insufficiency, muscular effort.

The purpose of this work is to study the applicability of cyclic, squarewave voltammetry and electrochemical impedance spectroscopy (EIS) together with carbon paste electrode (CPE) modified with EDTA in the electroanalytical determination of ammonium in NaCl solution.

The EDTA modified carbon paste electrode (EDTA-CPE) was prepared by thoroughly hand-mixing of synthesis EDTA and graphite powder (CP) to give EDTA/CP ratios of 10, 30, 50, and 80% by weight (w/w). The obtained paste was dried at room temperature then a portion of the resulting paste was grounded and packed firmly into homemade PTFE cylindrical tube (geometric area 0.1256 cm2) electrode. Electrical contact was established with a bar of carbon.

The electrode, after having been washed with bidistilled water and heated at room temperature, was transferred into the sample cell (100 mL) (the sample was purged with pure nitrogen for 10 min). A preconcentration step was necessary; the working electrode was immersed in water sample in open circuit. The initial working procedure consisted of measuring the electrochemical response of EDTA modified carbon paste electrode in 0.1 M NaCl electrolyte at fixed concentration of ammonium. The cyclic voltammetry behavior of proposed modified carbon paste electrode was recorded from -1.5 to 1.5 V. Optimum conditions were established by measuring the peak currents in dependence on all parameters: preconcentration time, EDTA loading and measuring solution pH. After optimization of the voltammetric parameters, calibration graphs were obtained by varying of the ammonium concentrations. All measurements were carried out under ambient conditions.

Figure 1 illustrates the cyclic voltammograms recorded at EDTACPE, in 0.1 M NaCl containing or not ammonium. Two redox peaks were observed, the first one at about -0.5 V in the cathodic scanning direction and the second one is the nature anodic at 0.5 V. These two peaks are sufficiently close, suggesting that they correspond to a reversible process. This is probably the nitrification process [8], which takes place in two stages, during which the ammonium ions (NH4+) are oxidized to nitrite and then to nitrate, According to the mechanism: 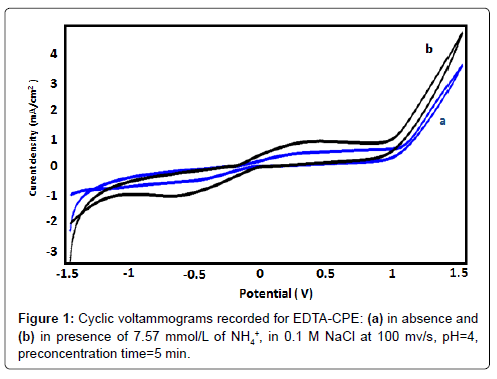 The influence of the scan rate was studied with EDTA-CPE immersed for 1 min in 7.57 mmol L-1 of ammonium. Figure 2 shows the relationship between the anodic peak current and the scan rate. The peak current exhibits a linear dependence on the potential scan rate in the range from 10 to 500 mV s-1 indicating that the EDTA-CPE reaction is controlled by non-diffusion process (Figure 2). 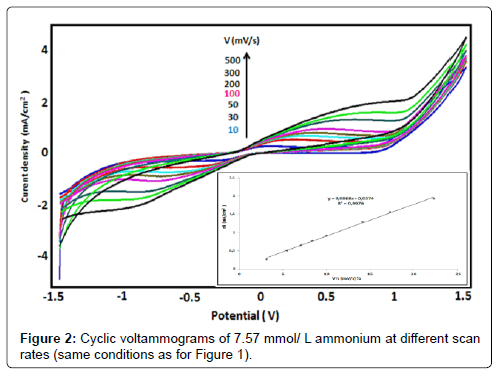 In order to optimize the performance of the EDTA-CPE, for the determination of ammonium, we investigated the parameters influencing the electrochemical responses parameters, EDTA loading, pH and accumulation time. The influence of preconcentration time was examined in 7.57 mmol/L ammonium solutions, by square wave voltammetry (SWV) and EIS (Figures 3 and 4). It is clear that the high reduction peak current density is obtained for a preconcentration time of 5 min. 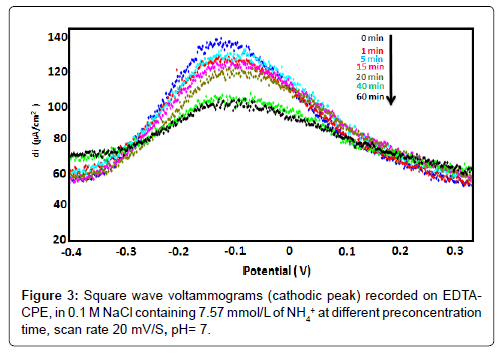 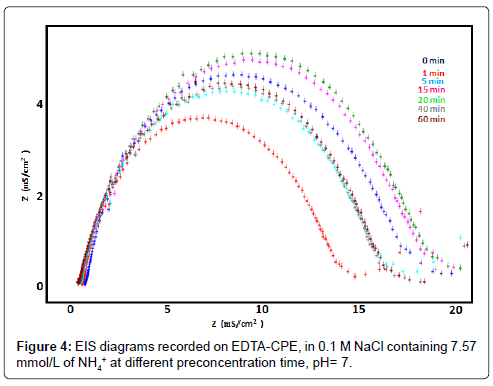 Figure 4 shows the EIS recorded at EDTA-CPE, in 0.1 M NaCl containing 7.57 mmol/L of ammonium. The EIS has the form of a half circle which appears at high frequencies and corresponds to electron exchange phenomena. The diameter of the half circle corresponds to the electron transfer resistance; its minimum value is obtained for a preconcentration time equal to 5 min. Then, the preconcentration time was fixed at 5 min for all further experiments.

The effect of varying pH on the current response of EDTA-CPE at constant ammonium concentration (7.57 mmol/L) is shown in Figure 5. As can be seen, the highest reduction peak current, is obtained at pH 4. The dependence of cathodic current response on the EDTA loading in the carbon paste in pH 4 conditions is shown in Figure 6. The current response increases with the increase of amount of EDTA until EDTA/CP ratio of 10% by weight (w/w). The cathodic peaks currents decreased significantly when more than 10% (EDTA, w/w) is used in the electrode preparation. This probably occurs due to the conductive reduce of area of the electrode surfaces. Hence a 10% EDTA of ratio (EDTA/CP) by weight was used throughout this work. 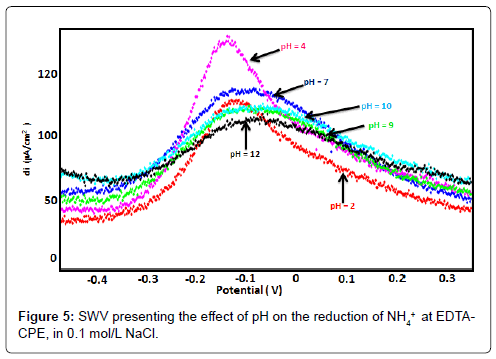 Figure 5: SWV presenting the effect of pH on the reduction of NH4+ at EDTACPE, in 0.1 mol/L NaCl. 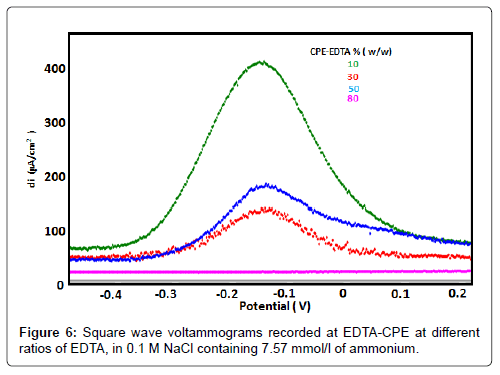 The electrode response was tested for ammonium solutions in the range from 1.5 to 15.5 mmol/L under the optimal condition mentioned above. Figure 7 shows a calibration graph was then constructed from the observed peak currents. The SWV response was linearly dependent on the concentration of ammonium. The linear regression analysis gave with a correlation coefficient of 0.9944 of reduction peak. The detection limit (DL, 3s) and quantification limit (QL, 10 s) were, respectively, 9.38.10-7 mol L-1 and 3.21.10-6 mol L-1. 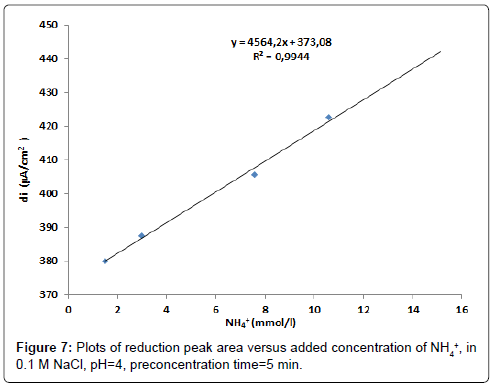 The morphology of the prepared electrode surfaces, CPE (a), EDTA-CPE (b) and EDTA-CPE after accumulating in ammonium solution (c), was studied by optical microscopy, (Figure 8). The organic matrix forms a homogeneous film that covers the entire surface of the carbon paste electrode. After preconcentration in an ammonium solution, we observe the formation of clusters corresponding to the complexes EDTA-NH4+.

Figure 8: Images taken by optical microscopy for: a- CPE, b- EDTA-CPE after preconcentration in NH4+ solution.

The proposed method for the determination of ammonium is characterized by their simplicity of preparation. The modifier is not soluble in water, non-toxic, and not a pollutant. The mixture of carbon powder and an incorporated species of EDTA were formed a homogenate paste. This last was glued strongly in the cavity of electrode. Also, there is no leaching of the electrode. The results obtained here show that the proposed SWV method is fast and sensitive.