Copyright: © 2017 Sueda S, et al. This is an open-access article distributed under the terms of the Creative Commons Attribution License, which permits unrestricted use, distribution, and reproduction in any medium, provided the original author and source are credited.

A Holter recording for 24 hours to 48 hours in cases in which CSA is strongly suspected based on subjective symptoms accompanied by syncope or palpitations without identifiable cause are classified as Class I according to the JCS guidelines. In contrast, Holter recording for 24 hours to 48 hours in cases in which it is difficult to record the ECG during attacks are defined as Class IIa. Yasue et al reported that chest pain develops in approximately a third of episodes of ischemic ST change in patients with variant angina, and the remaining two thirds events of coronary artery spasm were asymptomatic. In our 300 patients with CSA, just four patients (1.3%) had transient ST elevation (Table 1) and 18 patients (6%) with CSA had abnormal findings during 24-hour Holter examinations [15]. Before performing coronary angiography, we should try to perform the Holter recordings to obtain the ischemic ECG changes possibly due to coronary artery spasm.

Table 1: Comparisons of non-invasive examinations in patients with coronary spasm.

Table 2a: Comparisons of ischemic findings on exercise tests in coronary spastic angina patients without organicstenosis. 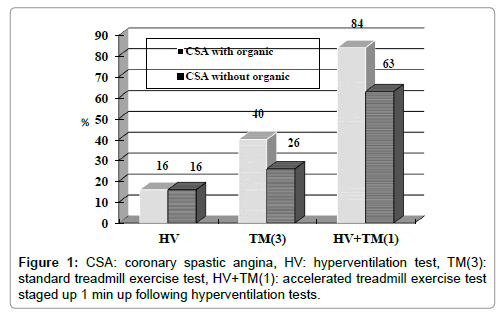 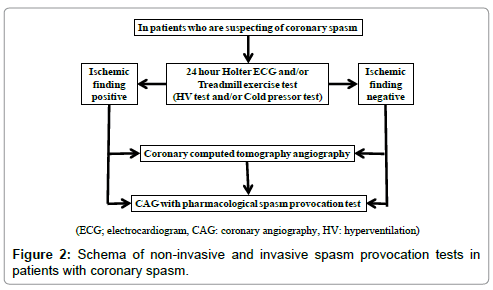