Copyright: © 2015 Al-Ganadi A, et al. This is an open-access article distributed under the terms of the Creative Commons Attribution License, which permits unrestricted use, distribution, and reproduction in any medium, provided the original author and source are credited.

Objective: To provide review of our experience in vascular anastomosis technique for kidney transplantation patients.

Material and Methods: 100 chronic kidney disease patients 89 males and 11females with mean age 23.5 ± 3 years have been operated for kidney transplantation from January 2011 through April 2015. Vascular part of operation was done using parachute suture technique and arteriotomy by aortic punch. Recipients were prospectively entered into a database and retrospectively reviewed. Data collected included the warm and cold ischemic time, arterial and venous anastomotic time, color Doppler ultrasonography examination of the anastomosis site on 1, 7 postoperative days, mean serum creatinine level on 3, 14 days after the operation and any early or late postoperative complications.

No vascular complications were detected in the early postoperative period by Doppler ultrasonography examination. The mean serum creatinine level on the 3the and 14the days after the operation was 0.9 (range, 0.5-4 mg/dl) and 0.6(range 0.5-1.2 mg/dl) respectively. Slow graft function was diagnosed in 2patients, with a good perfusion of the allografts showed by renal scan. During a mean follow-up of 4 years, we did not encounter any case of renal artery or venous thrombosis or any suspected arterial stenosis.

Conclusions: The parachute suture technique is safe and straightforward method for arterial and venous anastomosis in renal transplantation with low complication rates. Using aortic punch for arteriotomy facilitates the arterial anastomosis, which may results in excellent kidney function without stenosis of the renal artery.

Renal transplantation becomes the preferred treatment method of end stage renal disease due to advances in surgical techniques, perioperative management and immunosuppressive regimens. It is more cost-effective than is maintenance dialysis [1] and usually provides the patient with a better quality of life [2]. Surgical techniques have increasingly improved during the past 40 years, reducing surgical complications, morbidity and mortality [3].

In the present study, from January 2011 through April 2015, hundred renal transplants were done in our center. The vascular part of kidney transplantation is doing by cardiovascular surgeons. All renal anastomosis were done using parachute suture technique and arteriotomy by aortic punch, the technique we are using routinely in coronary aortic bypass graft surgery.

The iliac fossa approached retroperitoneal through suprainguinal reversed J incision. After mobilizing of iliac arteries and veins, during which the lymphatic channels were ligated, the explanted kidneys were placed in iliac fossa in their final place. The renal veins were anastomosed end-to-side to the common iliac vein or inferior vena cava in recipients, but the site of arterial anastomosis was selected with regard to the allograft position and its renal artery length. Both anastomoses are made with 6-0 monofilament nylon sutures. Here we are explaining the end-to-side anastomosis of renal artery to common iliac artery using aortic punch for arteriotomy and parachute suture technique for anastomosis.

The recipient’s iliac artery or aorta is selected as suitable for the anastomosis. The renal artery is then trimmed to an appropriate length. We strive to leave a slight tension on the anastomosis, to avoid kinking once the clamp are removed. We use to spatulated posterior wall of renal arteries, just when the diameter < 3.5mm. Using an 11 blade, an arteriotomy was performed in the recipient artery small enough to allow the insertion of a single-use 4-mm aortic punch into the lumen providing a clean accurate circular incision (Figure 1).

Figure 1: An arteriotomy is created with a No. 11 blade and a 4 mm aortic punch is used to create a circular arteriotomy.

The anastomosis can be completed with 8-10 stitches in most cases; symmetry in the spacing between stitches is important to assure hemostasis.

1) The first bite is Out-In suture was made beginning 3 mm ahead of the middle of the posterior walls of the renal artery and In-Out of the common iliac artery (Figure 2A). 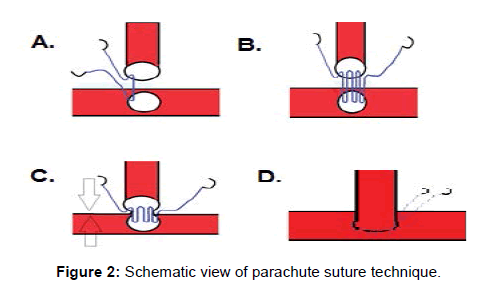 2) This process is then repeated along the posterior vessel wall, until the posterior walls of both arteries are secured and oriented with a continuous suture (Figure 2B).

3) The sutures are then rinsed with heparinized saline to reduce friction and gentle traction is applied to both ends of the suture, in a direction perpendicular to the axis of the vessels. A pair of atraumatic vascular forceps are used to provide intermittent counter-traction in the direction of the axis vessels. This help distribute tension evenly along the suture, and will allow the vessel walls to “parachute” together (Figure 2C).

4) Through this repeated process, the vessel wall are gradually brought together, then the anterior vessel wall is brought together with a continuation of the running suture. Finally, the anastomosis is finished at the same point of the beginning (Figure 2D). After the last suture, both ends of the suture material are pulled gently, but putting the knot is delayed until unclamping of the external iliac artery. This permits the anastomosis site to become expanded to its widest size, and prevents a purse-string effect at the anastomosis site.

The same method can be used for end-to-end or end-to-side anastomosis of the renal artery or vein.

In all cases, ureteroneocystostomy was performed by modified Lich Gregoir technique. Immunosuppression was given according to standard international protocols. Intraoperative data including the warm and cold ischemic times, and arterial and venous anastomotic times, are recorded. Follow-up consists of color Doppler ultrasonography examination of the anastomosis site on first and seventh postoperative days, and measuring blood pressure and serum creatinine level daily until postoperative day 14.

The mean serum creatinine level on the 3, an 14 days after the operation was 0.9 (range: 0,5-4 mg/dl) and 0.6(range 0.5-1.2 mg/ dl) respectively. No vascular complications were detected in the early postoperative period. Slow graft function (defined as serum creatinine level of > 3 mg/dL on the 5 day after transplant, but no need for dialysis [6]) was diagnosed in two patients, with a good perfusion of the allografts showed by duplex and CT scan angiography study. At time of this writing, the patients are alive with good graft function, we did not encounter any case of renal artery or venous thrombosis or any suspected arterial stenosis according to the clinical presentations.

Despite, continuous progress in immunosuppressive therapy, surgical technique, prevention and management of infections, vascular complication continue to account for about 3-15% of the cases of graft dysfunction [7,8]. They include transplant renal artery stenosis, arterial and venous thrombosis and postbiopsy arteriovenous fistula and pseudoanuerysm [9].

Refinement of the operative technique for renal transplantation has greatly reduced the rates of surgical complications, morbidity, and mortality in patients. In particular, significant progress has been made with regard to methods of vascular anastomosis [10]. The introduction of the Carrel (end-to-end suturing) patch technique by Alexis Carrelin 1902 is considered to be one of the most important steps in transplant surgery [11]. Since then, many arterial anastomoses have been used at various transplant centers [12-15]. Most of these efforts have been made to reduce kidney ischemic time and risk of transplant artery stenosis, because both warm and cold ischemic time and renal artery stenosis may lead to allograft dysfunction [15-17].

The transplanted renal artery stenosis (TRAS) incidence is between 1% and 23% depending upon its definition and diagnostic criteria. It is most common vascular complication seen after renal transplantation. The time of presentation of TRAS may vary from 3 months to 2 years after transplantation [18]. Multiple factors have been implicated in the etiology; suturing technique, intimal trauma during harvesting, kinking or twisting of artery, and atherosclerotic lesions in donor or recipient vessels [19].

Jones presented a sutureless vascular anastomosis technique using vascular clips in 21 recipients. In comparison with conventional running suture technique, the ischemic period reduced by 51% when clips were used for arterial and venous anastomosis [21].

Simforoosh and associates described the results of 1-suture, 1-knot technique for vascular anastomosis in renal transplant in 386 kidney recipients. They reported no vascular complications in the early postoperative period. This technique was safe, timesaving and especially valuable in obese patients and recipients with deep iliac fossa [14].

Allograft arterial stenosis should be suspected in any recipient who presents with new onset or severe hypertension refractory to medical therapy, unexplained graft dysfunction, and new audible bruit over the graft. Based on these clinical scenarios, we found no cases of renal artery stenosis in the recipients. The patients are alive with good graft function; we did not encounter any case of renal artery or venous thrombosis. This shows safety and good patency of anastomosis using parachute suture technique and arteriotomy by aortic punch. It can be applied even to quite small vessels. The using of aortic punch for arteriotomy is valuable especially in living-related transplants as there are no possibility for aortic patch with renal arteries.

Based in the present results and the review of the literature, parachute techniques represent valuable option by the shorter time, direct vision of vascular anastomosis, the application in arterial or venous anastomosis and the low complication rates. Additionally use of aortic punch for arteriotomy facilitates the arterial anastomosis, which may results in excellent kidney function without stenosis of the renal artery.