Parametric Study for Adsorption of Sodium Rhodizonate on Chitosan

Copyright: © 2015 Rashid K, et al. This is an open-access article distributed under the terms of the Creative Commons Attribution License, which permits unrestricted use, distribution, and reproduction in any medium, provided the original author and source are credited.

Sodium Rhodizonate, a derivative of Rhodizonic acid is widely used in industry and also for detection of different metals in waste water. In the present work the ability to remove Sodium Rhodizonate from waste water is studied using Chitosan as an adsorbent material. The studies are approved as a function of adsorbent amount, contact time, pH and temperature. Acidic pH (1.5-2), medium temperature (45-55) were found to be favorable for adsorption of Sodium Rhodizonate. Maximum adsorption of chitosan is obtained after 70 minute. Similarly the initial concentration Equilibrium isotherm was measured experimentally at different temperatures. It has been constructally shown that chitosan is a highly promising material for the removal of Sodium Rhodizonate

Water Pollution by dyes and heavy metals is a highly potential hazard to aquatic ecosystem as many of these metals and dyes are highly toxic, even when present in low concentrations. Dyes and heavy metals tend to accumulate in living cells and can cause severe problems to both human health and aquatic life. Most transition metals and some traces of dyes found in the wastewater during dye manufacturing are phenol, aniline, organic acid and benzene and their derivatives [1]. Not only waste of industries polluting the water but some other processes like mining agriculture wastes including cyanide and toxic heavy metals, improper sewerage treatment that is sometimes discharged without treatment into water bodies. Eliminating the concentration of heavy metals and dyes from the aquatic systems is very important so diversified engineered technologies are commonly applied in waste water treatment and refining industry effluents. These methods include filtration, ion exchange resins, Chlorination, Activated charcoal, Sedimentation [2]. Some of the methods are expensive and time consuming. In the current experiment waste water is treated with adsorption method.

Many researchers have mentioned that low cast adsorbent material can also be used for the treatment of waste water like, pine sawdust [3], activated charcoal prepared from Ricinus communis leaves [4] wood apple shell [5], rejected tea [6] and many other adsorbent. It is proved that low cast adsorbent material are very effective for the recycling of waste water especially for the adsorption of heavy metals [7] and dyes and also eco friendly.

In our investigations we used chitosan as a low cost adsorbent material, obtained from Chitin abundantly found natural polymer. Chitosan is de-acetylated form of Chitin which is biopolymer [8] that comes from crustacean shells and has ability to adsorbed a great variety of dyes. The strong affinity of dyes for this is explained by the relatively high proportion of nitrogen sites [9]. A frequent method for the production of chitosan is de-acetylating of chitin [10,11]. This reaction gives 98% product when allowed to go to completion (complete deacetylating). There are many uses of chitosan. e.g in agriculture can be used for coating of fertilizers, pesticides, insecticides, and herbicides for their restricted release to soil.

In waste water treatment, chitosan is used as flocculating and chelating agents, for the elimination of heavy metals and dyes. The dye under investigation is a derivative of Rhodizonic acid. This dye widely use for the detection of different metal ions like barium, lead, iron, strontium etc. at laboratory scale and gives colored precipitates when added to Strontiumand Barium [12]. It is also used as metal titration indicator [12], in chromatography [13] and in forensic applications [14]. The present effort is devoted to its removal from waste water.Different parameters like temperature, adsorbent dose, pH, adsorbent concentration and shaking time support the experiment.

Sodium Rhodizonate (C6Na2O6, named as 3, 4, 5, 6– tetraoxocyclohexene-1, 2-diol disodium salt) excites in dark brown solid and stable salt. Its molecular weight is 214.04 and melting point 300ºC. The aqueous solution gives orange to yellow color and decomposes in a few days, even in the refrigerator. Chemicals, NaOH, HCl, Liquid ammonia, were of analytical grade and used without further processing. The stock solution of dye is prepared in de-ionized water by dissolving 1 gm of dye in 1000 ml of water. Standard solutions were made from the stock solutions in the concentration range 0.001%- 0.005%.

Adsorption studies were carried out at 25°C. The pH of the solutions were adjusted for acidic media with acetic acid and for basic with liquid ammonia. A specific amount of adsorbent (Chitosan) was added to the sample and allowed sufficient time for adsorption equilibrium. Then the solution was filtered with filter paper and dye concentration were determine in the filtrate at λmax=320nm. The outcome of various parameters on the adsorption rate were observed by changing contact time ‘t’ (20- 90 min), Initial concentration of dye (1 mg/100 ml), adsorbent amount (0.05 gm), adsorbent size (0.1 gm- 0.6 gm), initial pH of the solution (1-6), and temperature (40-90°C). The quantity of dye adsorption (Q.D) percentage at any instant of time was calculated by the following equation.

The amount of Sodium Rhodizonate adsorbed over Chitosan was studied by varying pH range 1.5 to 6.5 and adsorption was bring into being to decrease with increasing pH (Figure 1). Chitosan act as a weak base. At low pH, amino group of Chitosan take the protons available in solution. The profile shows that the higher adsorption value of at acidic pH 1.5, which appears to be as best values of pH for adsorption. The adsorption was checked at 35°C. 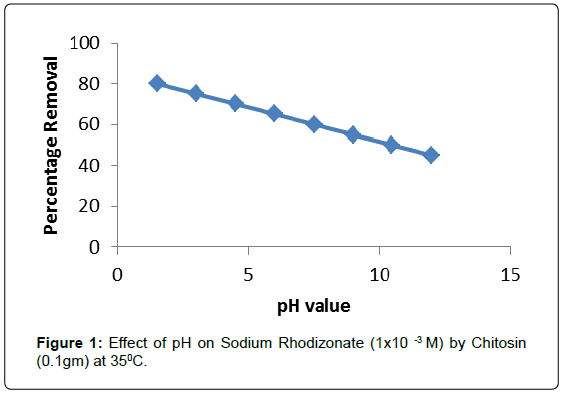 The Concentration of dye against the adsorbent material (Figure 2) at 35, 45 and 55°C shows that the uptake of dye increases with the change in quantity of dye at each temperature. Sodium Rhodizonate had taken x10-3M to x10-2 M at different temperatures and with different volume at pH 1.5.The adsorption of the dye is directly proportional to temperature which shows that the reaction probably endothermic. 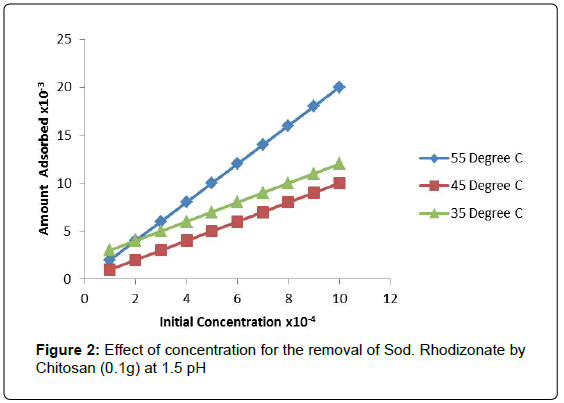 Figure 2: Effect of concentration for the removal of Sod. Rhodizonate by Chitosan (0.1g) at 1.5 pH 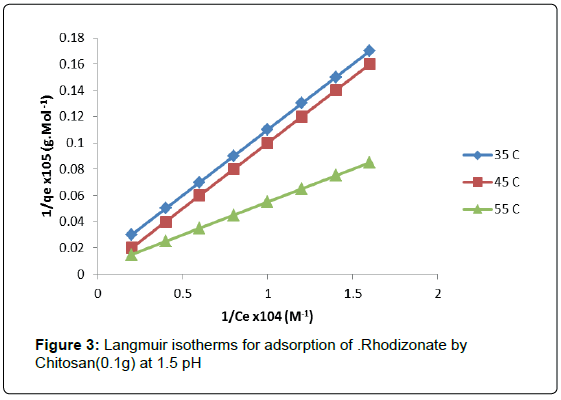 Figure 3: Langmuir isotherms for adsorption of .Rhodizonate by Chitosan(0.1g) at 1.5 pH

Where Ce is molar concentration of solution at the time of equilibrium, QO number of moles of solute absorbed, b is constant. 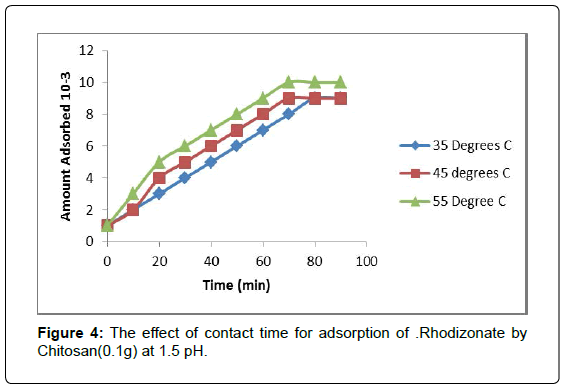 Figure 4: The effect of contact time for adsorption of .Rhodizonate by Chitosan(0.1g) at 1.5 pH.

The adsorption characteristics indicated a rapid uptake of the adsorbent within the time range of 20-90 minutes. A steady raise was observed. The maximum adsorption was at 70min. The adsorbent rate however becomes constant after 70 minutes.

The amount of adsorbent also an important feature (Figure 5) and it was found that the adsorption of the dye is directly proportional to amount of dye from 0.01 to 0.1 g.The further increase in the amount did not affect the adsorption and it remains constant. 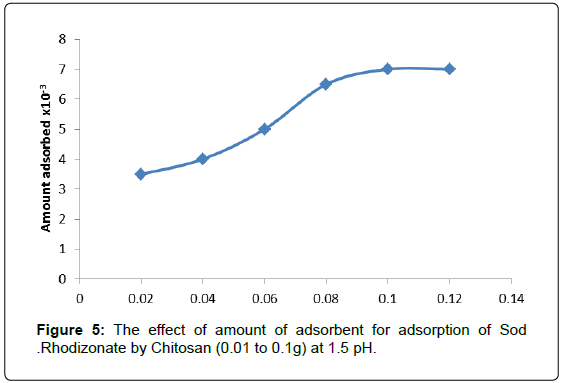 The results of our investigation are technically very promising and economically feasible and efficiently used for the taking away of Sodium Rhodizonate from the waste water. Different parameters observed during the process of investigations revealed that the temperature, volume of the dye, pH, contact time and adsorbent dose all were important factors to controlling adsorption at different temperatures. According to results adsorption is maximum at 1.5 pH of 1x10-3M solution. For Initial concentration of dye Sodium Rhodizonate had taken x10-3M to x10-2 M at different temperatures and with different volume at pH 1.5.The adsorption of the dye also increases with increase in temperature. The effect of contact time for adsorption was measured for Sod. Rhodizonate by Chitosan which is maximum at 70 minutes. A linear plot of Langmuir isotherm confirms the applicability of adsorption ability of Chitosan. Langmuir isotherms showed that the reaction is favorable at pH 1.5, temperature 55°C. For adsorption of Sodium Rhodizonate. The amount of adsorbent is also important and it was observed that the increase in amount shows the adsorption capability of the dye. Maximum ability to absorb the dye of Chitosan is at 0.1 g.

The author thanks to the Govt. College University, Lahore, Pakistan for the Lab facilities.