Copyright: © 2016 Chaudhary A. This is an open-access article distributed under the terms of the Creative Commons Attribution License, which permits unrestricted use, distribution, and reproduction in any medium, provided the original author and source are credited.

In recent years, due to exponential population growth and industrial progress, much of the air, water and land have become contaminated due to open dumps of municipal chemical and industrial wastes and effluents. All types of contamination have direct or indirect effects on ground soil properties. The oil, gas and petrochemical industry are considered as a potential source having complex and concentrated influence on the soil environment. The economic prosperity of a country is judged by its industrial capacity. Therefore, with more industries using more and more petroleum hydrocarbons as a fuel, the problems of soil pollution due to influence of industrial waste containing oils and greases has also increased. An analysis of the effects of the contaminated soil has to be carried out before any recommendation can be made for soil regarding its use in various construction activities. As the clays or colloids have so much surface area and are negatively charged at their outer particle perimeters, can attract and swell too many hundred times their original particle size with contaminants. Clayey soils also form a barrier and can trap hydrocarbons contaminants. The study was carried out by using engine oil as contaminant. The two types of clay samples (Natural clay and China clay + bentonite) with different plasticity were contaminated with different concentrations of engine oil ranging from 3% to 9% and the engineering properties of the soil samples were evaluated and compared.

The surface and sub-surface soil is becoming increasingly contaminated because of surplus disposal of chemicals and waste materials produced as a result of rapid industrialization and various human activities. Thus in order to re-use the contaminated land for its intended purpose industrialized and developing nations are facing a challenge of broad range of environment restoration associated with contamination of soils. The hydrocarbons are the common soil contaminants from a variety of sources including leaking fuel storage tanks, crude oil spills and production waste products. Once a liquid petroleum product is released into the ground, it partitions into three separate phases; dissolved, liquid and gas. A small fraction of the petroleum hydrocarbon dissolves in the soil ground water, a portion of the product remains in the soil pore space in its pure liquid form as residual saturation and some of it evaporates into the air trapped in soil pores [1-3]. Construction of any civil engineering structure over such contaminated land may lead to various geotechnical problems due to unintended modification of soil properties. Therefore, the testing of soil with relation to the determination of its engineering and physical properties and evaluation of effects of certain other factors such as seepage conditions forms the important part of engineering. In this study, locally available clay and china clay (most common form of Kaolin group of minerals) mixed with bentonite (aluminium silicate hydrate) was used to increase the plasticity characteristics of the clay. The used engine oil was added for contamination of clayey soils in varying percentages (3% to 9% by Wt.). Finally the properties evaluated of the uncontaminated samples and contaminated samples are compared and effect of contamination has been ascertained.

In this present work, locally available natural soil (clay with low plasticity) was collected from Derabassi. China clay and bentonite was procured from local construction material and chemical shop. The bentonite was mixed in the china clay at 10% by weight in the dry condition. It was then oven dried for 24 hours before it was mixed with the contaminant.

The used engine oil was mixed in the soil at the rate of 3%, 6% and 9% by weight of the contaminated sample. This range of contamination was chosen keeping in view the field contamination mostly found.

The oven dried samples were hand mixed with the known quantity of the contamination in metal trays. These were covered tightly with black polythene sheets. The contaminated soil was kept for seven days before testing.

Moisture content is defined as the ratio of mass/weight of water to mass/weight of solids. It changes the soils from liquid state to plastic and solid states and controls the shear strength, compressibility and consolidation of soils. Oven drying method was used to perform this test [4-7]. The moisture content of clay was found to be 12.7% and that of China clay as 1.36%.

The Atterberg limits are a basic measure of the critical water contents of a fine-grained soil: its shrinkage limit, plastic limit, and liquid limit. As a dry, clayey soil takes on increasing amounts of water, it undergoes distinct changes in behavior and consistency. The plastic limit (PL) is defined as the moisture content at which soil begins to behave as a plastic material. A plastic material can be molded into a shape and the material will retain that shape. If the moisture content is below the plastic limit, it is considered to behave as a solid, or a nonplastic material. The liquidity index or Limit (LL) is used for scaling the natural water content of a soil sample to the limits. It can be calculated as a ratio of difference between natural water content, plastic limit, and liquid limit: LI = (W-PL)/(LL-PL) where W is the natural water content. The water contents at which the soil changes from one state to other are known as consistency limits or Atterberg limits and basic measurement of liquid, plastic and shrinkage limit are shown below in Tables 1 and 2 respectively [5,7].

The CBR is a measure of resistance of a material to penetration of standard plunger under control density and moisture conditions. It was conducted on re-moulded specimen in the laboratory.

CBR value is calculated as:

The specific gravity of the soil solids decreases due to the contamination with U.E.O. In clay-I it reduces to a minimum value 2.32 at 3% U.E.O. from original value of 2.64 whereas as the minimum value of 2.32 at 9% U.E.O. has been found out in the clay-II. The reduction in the value of specific gravity may be due to organic content in the form of hydrocarbons chain present in U.E.O. 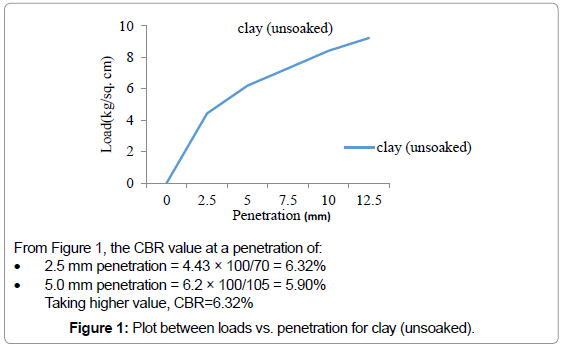 Figure 1: Plot between loads vs. penetration for clay (unsoaked). 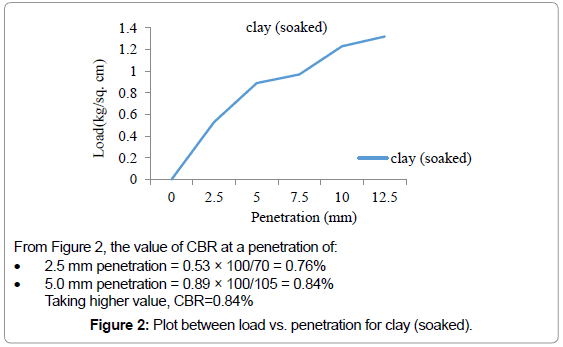 Figure 2: Plot between load vs. penetration for clay (soaked). 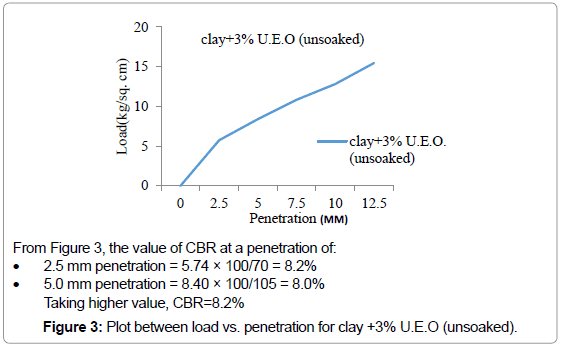 Figure 3: Plot between load vs. penetration for clay +3% U.E.O (unsoaked). 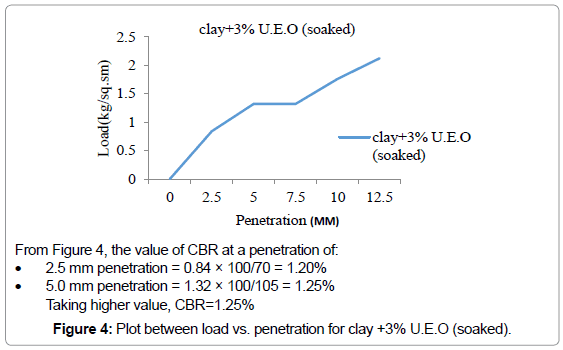 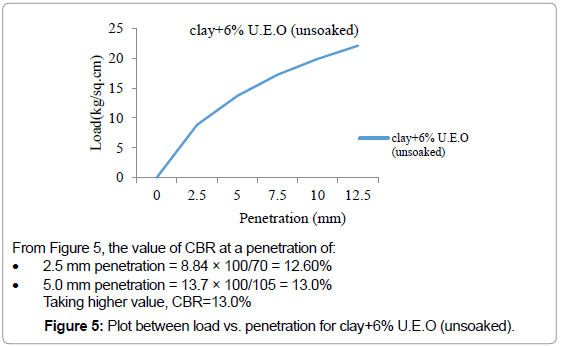 Figure 5: Plot between load vs. penetration for clay+6% U.E.O (unsoaked). 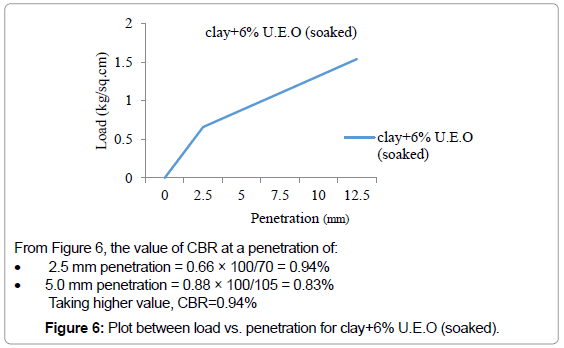 Figure 6: Plot between load vs. penetration for clay+6% U.E.O (soaked). 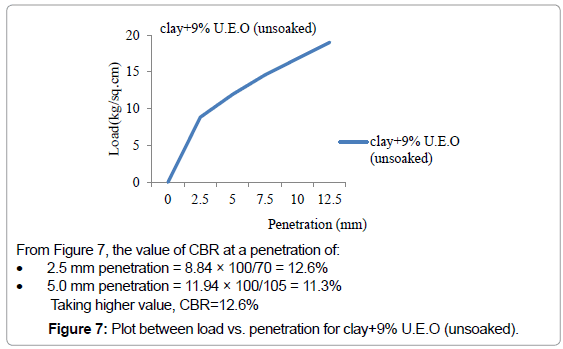 Figure 7: Plot between load vs. penetration for clay+9% U.E.O (unsoaked). 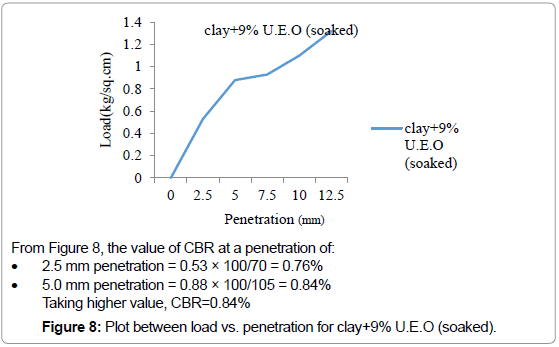 Figure 8: Plot between load vs. penetration for clay+9% U.E.O (soaked). 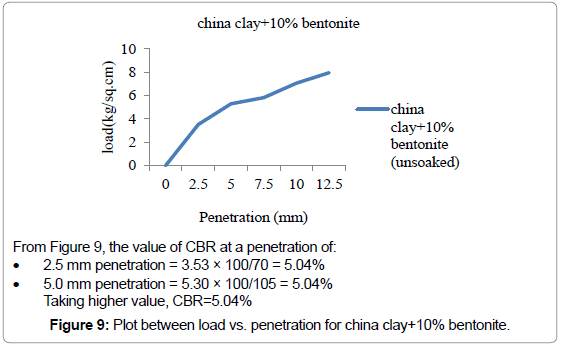 Figure 9: Plot between load vs. penetration for china clay+10% bentonite. 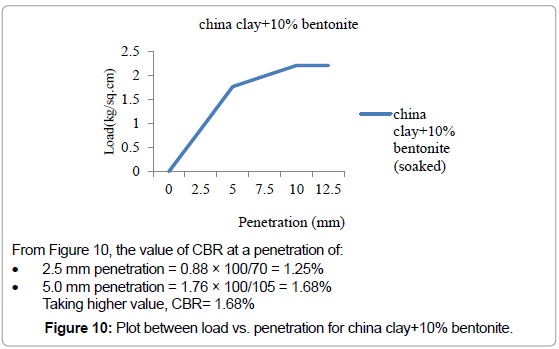 Figure 10: Plot between load vs. penetration for china clay+10% bentonite. 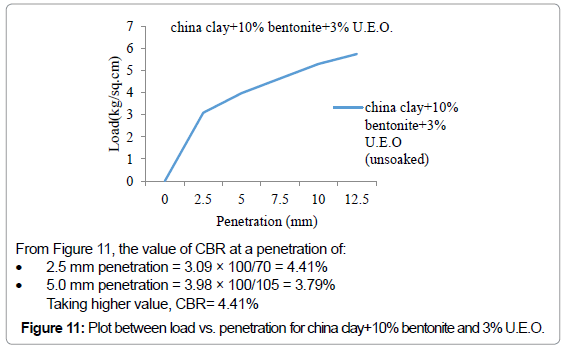 Figure 11: Plot between load vs. penetration for china clay+10% bentonite and 3% U.E.O. 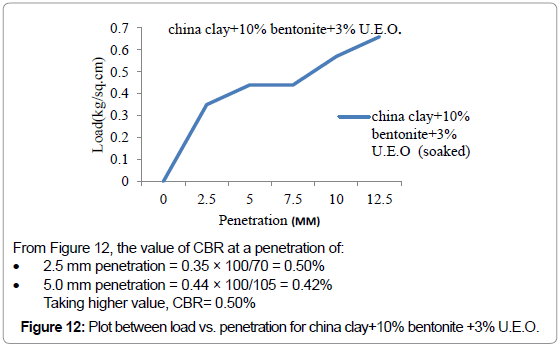 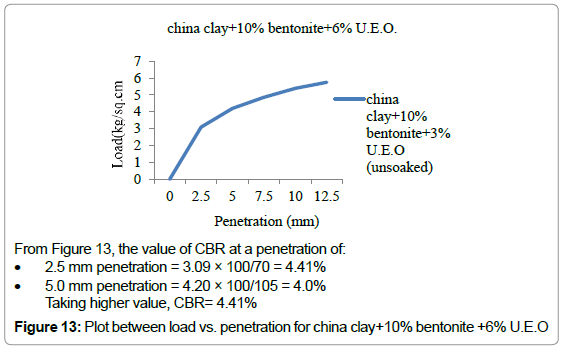 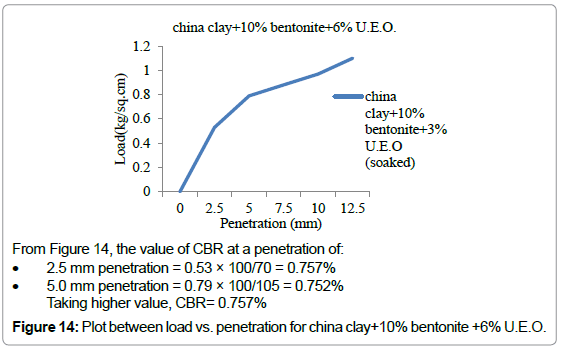 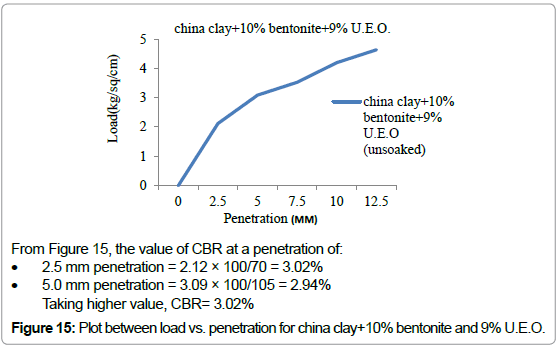 Figure 15: Plot between load vs. penetration for china clay+10% bentonite and 9% U.E.O. 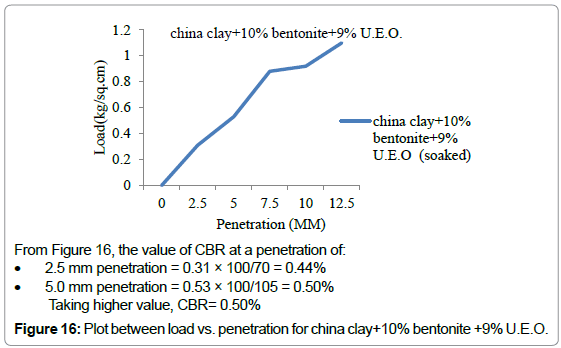 The engineering properties and characteristics of cohesive soils (clay-I CL and clay-II CH) changes significantly with different contamination levels of used engine oil. Consequently the performance and behavior of contaminated clays get altered.

The maximum value of shrinkage limit has been observed at 3% and 9% contamination for clay-I and clay-II respectively. The change in Atterberg limits may be attributed to increase in thickness of diffuse double layer due to decrease in the dielectric constant of pure liquid.

The specific gravity of soil solids decreases due to contamination. The reduction may be due to organic content in the form of hydrocarbon chain present in used engine oil. Soaked CBR value decreases further due to contamination and found to be less than 1%. Hence pavement on contaminated clayey subgrade needs proper stabilization of the subgrade before receiving further component layers of the pavement.