Copyright: © 2015 Ibrahim SK. This is an open-access article distributed under the terms of the Creative Commons Attribution License, which permits unrestricted use, distribution, and reproduction in any medium, provided the original author and source are credited.

ZigBee’s feature is low power utilization, approved specifications make it very suitable to be used with application sensor devices. Also features are short distance communication and low cost. ZigBee technology makes that difficult wire repeat can be shunned in the area of home, manufacturing plant, infirmary, etc. This paper compares the cluster tree topology with the star topology of ZigBee in terms of the amount of received data, throughput and delay, it shows that cluster tree topology is more salutary than star topology.

ZigBee technology is an emerging worldwide open standard for wireless radio networks in the controlling and monitors all fields; the main goal of ZigBee technology provides advantages like low power, low cost, scalable, reliable and flexible. Based on IEEE 802.15.4 [1], ZigBee applied radio bands; 915 MHz in the united states of America, 868 MHz in Europe and 2.4 GHz in most worldwide [2]. It is simple than other wireless. ZigBee susceptible node requires only about ten percentage of the application of a typical other wireless. Its stack architecture is built on the standard OSI multi-layer, but defines only those layers relevant to doing functionality of market space. The IEEE 802.15.4-2003 standard [3] contains two of the layers are: 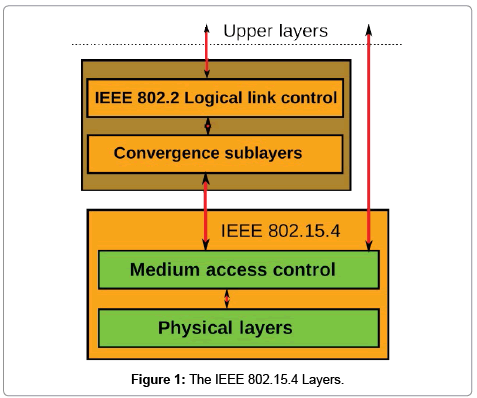 The authors compared the PAN interconnection methods. Results show that the PAN Bridge is the best [4]. In ref. [5], the main objective of the paper was to study the performance of the system in terms of tree, mesh topology with multiple coordinators. The results presented that tree routing was more appropriate for WSN than the mesh. 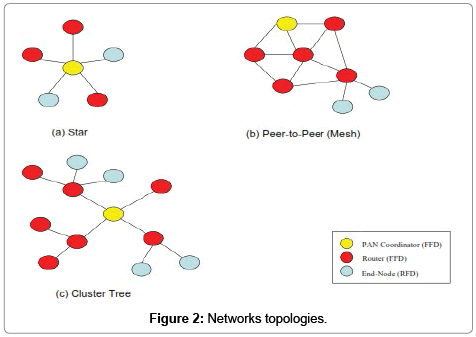 Applications for this type network include home computerization, PC peripherals, and games. Each star-topology network selects a PAN Identifier, never currently used by any different network within the range. This allows each star network to work separately. The beacon is work to synchronize each node with the coordinator. In peer-to-peer (mesh) topology, there is also one PAN coordinator. In a star topology network, any ZigBee device can link with any different node device same in scope of one another. A mesh topology network can be ad hoc, self-arranging and healing.

Applications such as industrial control and observing, wireless sensor, asset and inventory tracking would benefit from such topology. It also allows several hops to route data from the node device to another in the network. It can provide reliability by multipath routing. A peerto- peer topology is not used Beacon. This reductions control and growths collisions as compared to the beacon enabled network [4].

A ZigBee scheme contains of various components. The almost requisite one is the device. A ZigBee device may be reduced-function device (RFD) or a full-function device (FFD) [6]. Cluster-tree topology is a special situation of a peer-to-peer network in which most devices are FFDs and an RFD may connect to a cluster tree topology as a leaf node device on the end branch. The FFD can turn like a router and provide harmonization facilities to other devices and routers. One of these router devices is the PAN coordinator device.

The PAN coordinator device shape the first cluster by creating itself as the cluster head (CLH) with a cluster ID (CID) of 0, selecting an unused PAN Identifier, and propagation beacon frames to adjacent node devices.

An applicant node device, receipt a beacon frame may invitation the CLH to join the network. If the PAN coordinator licenses the node device to connect, it will append this new node device as a child in its adjacent record. Recently connected node device will become as a parent in its adjacent record and starts sending periodic beacons like that other nominee node device might then connect the network at that node device. The coordinator may teach a device to convert the CLH of a fresh cluster adjacent to the first one. The advantage of this multi cluster, hierarchical construction is the amplified coverage area at the cost of increased message latency [6].

The IEEE 802.15.4 protocol has recently been accepted as a communication standard for low data rate wireless Personal Area Networks [5]. This protocol is quite flexible for an extensive range of situations if correct regulation of its factors is carried out. Essentially, this protocol as well offers real-time assurances based on the GTS technique. The GTS technique is quite smart for time-sensitive wireless sensor network situations, especially when supported by tree network topologies [7], like as outlined in the ZigBee standard technology. The IEEE 802.15.4 and the ZigBee technology are powerful. IEEE 802.15.4 MAC uses the CSMA/CA technique for arriving the communication channel, such as IEEE 802.11 and IEEE 802.15.3. There are two variants: Beacon Enabled Network, which uses the Slotted CSMACA and Non Beacon Enabled Network, which uses the Unslotted CSMACA. Moreover, it supplies the GTS allocation process in order to supply real application time [8].

The IEEE 802.15.4 standard identifies the use of three modulation kinds: BPSK, ASK and O-QPSK. For BPSK and OQPSK the digital data modulates the phase of the signal. For ASK the packet modulates the amplitude of a signal. The IEEE 802.15.4 standard use of Parallel Sequence Spread Spectrum or of Direct Spectrum. These techniques of energy spreading to improve the operations of the communication system in a multi of path place [9].

OPNET 14.5 used in network simulation because it is powerful computational software used to model and simulate data networks [6]. OPNET Modeler supplies a complete development environment associate the modeling of distributed systems and communication networks. Both conduct and performance of a model can be analyzed by performing discrete event simulations. A Graphical User Interface presents the configuration of the situations and the development of network models. Three hierarchical planes for configuration are separated [10]

• The network stage, creating the topology of the network under investigation.

• The node stage defining the behavior of the node and controlling the flow of data between different functional elements inside the node.

• The process stages, describing the underlying protocols, represented by finite state machines (FSMs) and are created with states and transitions between states. Different graphical presentations for the simulation results are available and node mobility can be easily implemented in different types of nodes i.e., ZigBee coordinator, end device and router nodes [10].

Simulation of design in this network, star routing and tree routing with number of routers and end devices would be taken and number of end devices and routers with three PAN coordinators (Table 1). These coordinators were failing with different time respectively (Figure 3-8). 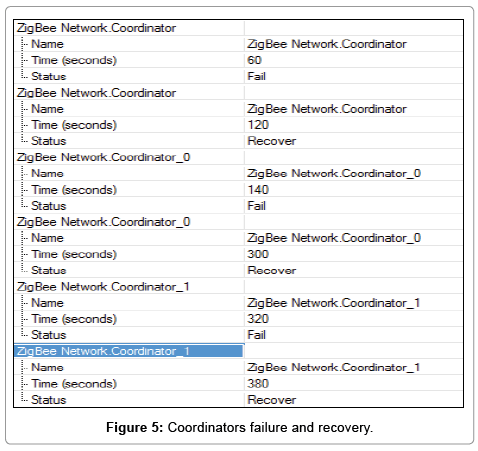 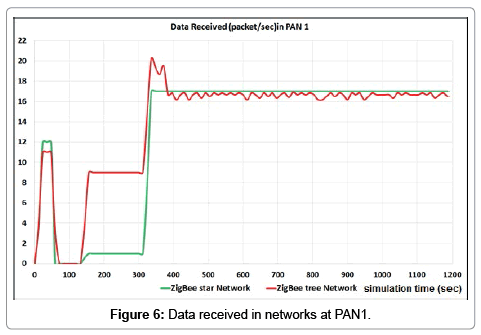 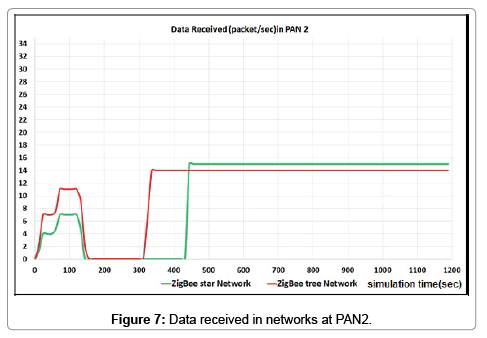 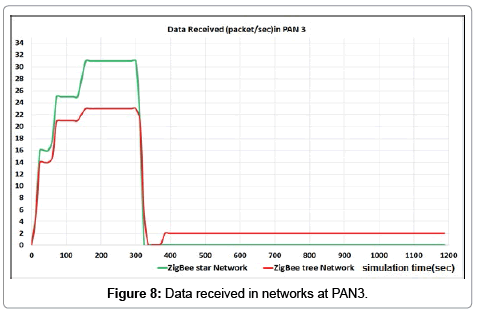 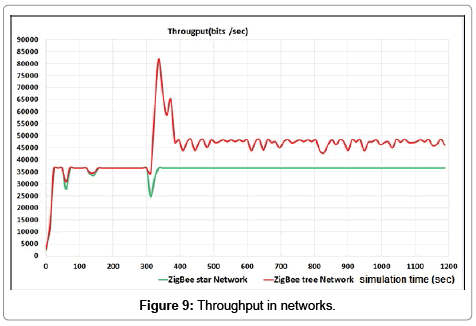 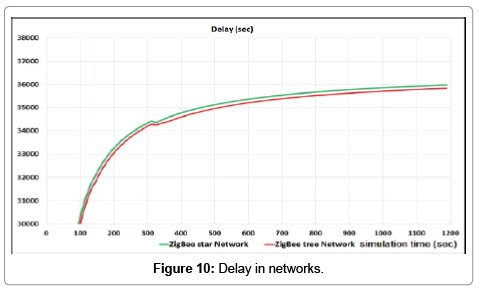 In both cases the networks topology tree and star show that the tree is the best of the star network that is due to the control of transportation, Through the cluster tree topology is working to split the network into parts, and this leads to fast find the failed coordinator node either in the star needed more time to find the failed coordinator node.