Copyright: © 2016 Kiran PA, et al. This is an open-access article distributed under the terms of the Creative Commons Attribution License, which permits unrestricted use, distribution, and reproduction in any medium, provided the original author and source are credited.

Lip prints are an important form of transfer evidence, establishing the connection between a person and the crime scene and with the parallel increase in the sophistication in crime it is necessary to apply less known techniques like Cheiloscopy. The aim of this study is to find out the most and least common lip print pattern in males and females residing in South India and to study the extent of similarity among lip print patterns of twins and siblings residing in South India. The study was conducted on 50 pairs of twins and 50 pairs of siblings out of which 90 were males and 110 were females. The samples were collected using two methods – lipstick method and black powder development method. The most common lip print pattern was found to be Type II- Branched Pattern in both males (42.2%) and females (43.63%) and the least common pattern was found to be Type III- Intersected Pattern in both males (5.55%) and females (2.72%) in the South Indian Region. There was no correlation between the extent of similarity of lip print patterns among twins and siblings in the South Indian region.

Cheiloscopy is the study of the prints formed by the grooves or furrows present on the red part or the vermilion border of the human lips [1]. The pattern of lip print is unique to an individual [2] and thus can be used to fix the identity of a person [3]. Individual elements of vermilion zone patterns also contribute to the uniqueness of lip prints and thus help in individual identification.

Variations in patterns among males and females could help in sex determination [4]. The patterns recover after undergoing alterations like trauma, inflammation and diseases like herpes and they do not vary with environmental factors [5]. Age and smoking of cigarettes also do not change the lip print pattern.

However, there can be minor changes in the lip print pattern due to some cuts, surgical marks, and genetic deformations or due to a person’s occupation like blowing musical instruments [6]..

Collection and preservation of lip print patterns include photographing the suspect′s lips directly as well as applying lipstick, lip rouge, or other suitable transfer mediums to the lips and then having the individual press his or her lips to a piece of paper or cellophane tape or similar surface and then preserving the print by pasting on a bond sheet.

Latent prints can be taken against a suitable surface and then processing these prints with either conventional finger print developing powder or with a magna brush and magnetic powder. It can also be developed by using chemical and optical methods [8]. The developed prints should be lifted using fingerprinting tape and preserved on a bond sheet.

Some of the important contributors to Cheiloscopy include Fischer (1902) who was the first anthropologist to describe the furrows on the red part of the human lips, Locard (1932) who recommended the use of lip prints in personal identification and criminalization, Synder (1950) who reported in his book Homicide Investigation that the characteristics of the lips formed by lip grooves are as individually distinctive as finger prints and Kasprzak (1990) who conducted research to elaborate the practical use of lip prints.

Santos (1960) proposed that these lip characteristics could be used in personal identification and devised a simple system for classifying lip prints.

Suzuki and Tsuchihashi (1970) devised a classification which is widely used and is as follows:

1. Type I - A clear-cut groove running vertically across the lip (Figure 1) 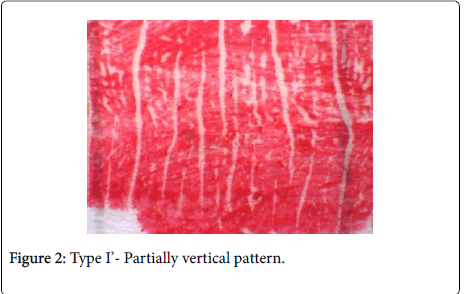 Latent prints were developed on glass surface using fingerprint black powder and was compared with standard lipstick prints to determine the effectiveness of the technique.

The percentage matching with self-lipstick print of good latent prints range from 25% to 100% [10]. The most predominant type of lip print among the Marathi community is found to be Type III- branched grooves. Lip prints are unique to an individual except in monozygotic twins [11].

Families with twin children showed no correlation between any particular lip patterns with blood groups however, in families with siblings, some correlation was observed [13]. Lip prints are hereditary yet considered to be individualistic, each possessing their own unique characteristics [14].

The study was conducted in Bangalore and Konini, Kerala belonging to the South Indian region on a population with age group within 2-39 years [15]. To find out the most and least common lip print pattern in the given population 90 males and 110 females were considered.

The method used to collect data was snowball technique. To study the extent of similarity of the lip print pattern among twins and siblings 50 pairs of twins and 50 pairs of siblings were considered [16].

Then the glued portion of cellophane tape strip was placed on the subject’s lips and the subject was asked to make a lip impression in the normal rest position of the lips by dabbing it in the center first and then pressing it uniformly toward the corners of the lips [17]. 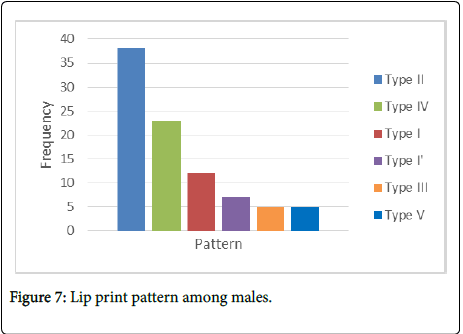 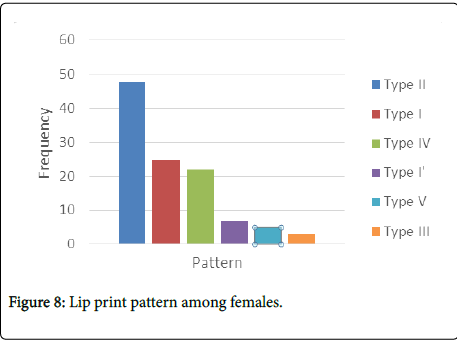 The percentage of similarity of lip print patterns in siblings was found to be 34% and that among twins was also found to be 34%. The respective skewness values are 1.253482 and 1.380368 (Table 2). These percentages and skewness values being very close indicate that there is no correlation between the lip print patterns of twins when compared with siblings (Figures 9 and 10). 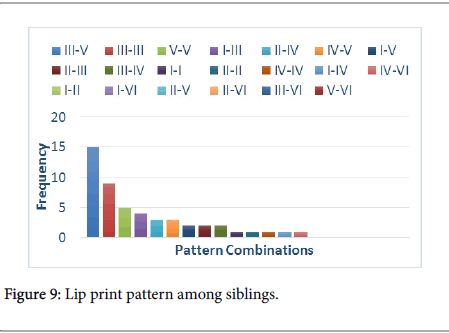 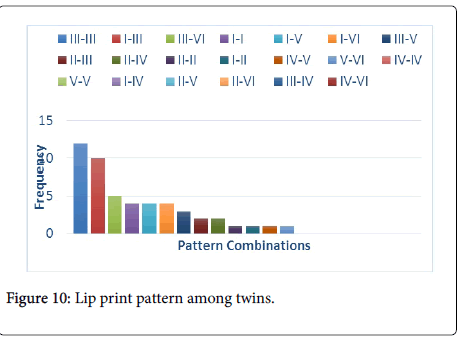 2. There was no correlation between the extent of similarity of lip print patterns among twins and siblings in the South Indian region.