Pharmacokinetic Study of Cycloserine in Rat Lung and Blood Tissues

Copyright: ©2015 Yan L, et al. This is an open-access article distributed under the terms of the Creative Commons Attribution License, which permits unrestricted use, distribution, and reproduction in any medium, provided the original author and source are credited.

Objective: To investigate the pharmacokinetics of cycloserine in healthy rat blood and lung tissues.

Tuberculosis (TB) ranks as the second leading cause of death from an infectious disease worldwide [1]. Globally, 3.5% of new and 20.5% of previously treated TB cases was estimated to have Multidrugresistant TB (MDR-TB). Advances in the fields of therapeutic medicine have had a less than optimal effect and MDR-TB mortality is unacceptably high. Cycloserine is a new second-line anti-tuberculosis drug and mainly used in combination with other drugs for the treatment of MDR-TB. Cycloserine blocks the synthesis of adhesive peptide of bacterial cell wall by inhibiting the function of D- alanine racemase (Alr) and synthetase (Ddl) [2]. Therefore it has strong killing effect against Mycobacterium tuberculosis (MTB) and Nontuberculosis mycobacteria (NTM). Cycloserine also has the characteristics of good capability of penetrating in tissues and light injury to liver. In addition, the resistant rate of MTB to cycloserine is fairly low. Therefore, WHO recommends the regimen containing cycloserine for the treatment of MDR-TB [3,4]. Currently, the concept of the target site concentration as a direct link to therapeutic drug effects and direct target tissue concentration measurements as a means of optimizing individual drug therapy is receiving much attention [5]. Studies on pharmacokinetics of cycloserine in blood and lung tissue can provide reference for clinical medication. Unfortunately, we have not found many relevant reports. To address this need, we conducted this study to investigate the pharmacokinetics of cycloserine in healthy rats blood and lung tissues.

Microdialysis equipment was product of Swedish CMA company including microdialysis pump(CMA402), trace collector (CMA820), probe of blood and lung tissues(CMA/20PES) and 1 ml syringe. The length and diameter of the dialysis membrane in probe was 10 mm and 0.5 mm. The cut-off of molecular weight was 100000. Spectrometer includes API-3200 LC- MS, AB 3200 MS, Q TRAP and SHIMADZU LC-20AD.

We adopt reverse dialysis method. Rats were fixed in 37°C heat insulation pad after anesthetized. The oblique incision was in the gap between the fifth and the sixth rib of the right chest along the rib clearance. From the broken segment of the fifth rib, expose the right lung. Microdialysis probe was implanted into lung tissues towards the direction of the lung hilum along the incision. Fixed and closed the chest. Blood vessels probe was implanted into inferior vena cava via the left femoral vein. Ringer solution was loaded into the probe.

The postoperative recovery period was about 2 hours. Ringer containing 1 μg/ml cycloserine was loaded into blood and lung tissue respectively at a constant rate of 2 μl/min. The drug concentration in the perfusion solution (Cperf) and the drug concentration in dialysate (Cdial) were determined by LC-MS-MS. The in vivo recovery of the probe was calculated by the following formula: Rdial=(Cperf—Cdial)/ Cperf. The actual concentration of drugs in vivo (Cu) was obtained by the conversion of continuous monitoring income dialysate concentration (Cm) with the formula of Cu=Cm/Rdial.

Cycloserine was orally administered to rat with the dosage of 22.5 mg/kg body weight. Then we began collecting dialysate samples. Samples were collected once every 15 min for the former 240 min and once every 30 min later, until the end of 480 min. Synchronous monitoring drug concentration changes in the rat pulmonary tissue and blood after administration of 480 min.

Under the condition of this experiment with no endogenous interfering substances in the dialysate, the shape and resolution of cycloserine was fine. The retention time was 4.6 min.

Cycloserine was weighed accurately and added into ultra-pure water to make a series of solutions. Parallel operated three copies and take 10 μl sampling. Determine and record the peak area by LC-MSMS. The lowest limit of quantification was 22 μg/ml. A linear regression was performed between cycloserine area(y) and concentration(X). The standard curve obtained: y=353.96839x + 504.17744 (r=0.99996) (weighting: 1/x2). It showed that the concentrations of Cycloserine in the range of 22 ng/ml-2200 ng/ml in the dialysis fluid had good linearity.

Continuously determine standard solutions of cycloserine in low, medium and high concentration for 6 times. The intraday precision (RSD) and the between day precision (RSD) was less than 3% and less than 4%respectively. Precision and accuracy are in line with the requirements of determination of biological sample.

The average recovery rates of blood and lung tissue probe of the six rats were 89.4% and 86 ± 5%, respectively. After the samples were collected, all experimental rats were exploratory laparotomy. We did not find obvious pulmonary hemorrhage and abnormal accumulation of fluid. The probes were retained in the lungs for paraffin section to confirm that the site where probe implantation was parenchyma of lung. Parameters of non-compartmental model are detailed in Table 1.

Note: Cmax and tmax was the peak concentration of drug in the tissue and the time reach peak concentration. AUC0-inf and AUC0-t represented the total area under the curve and the area to the end point of observation, respectively. MRT was the average dwell time of the drug molecules in vivo. 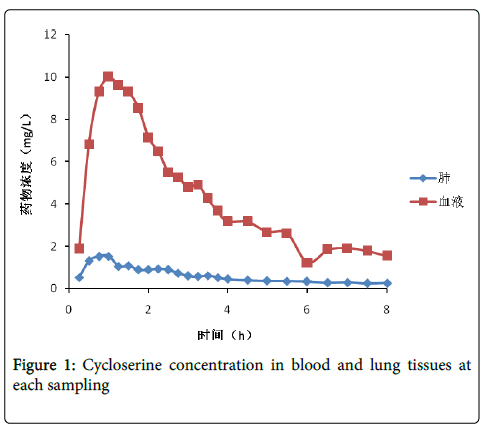 Figure 1: Cycloserine concentration in blood and lung tissues at each sampling 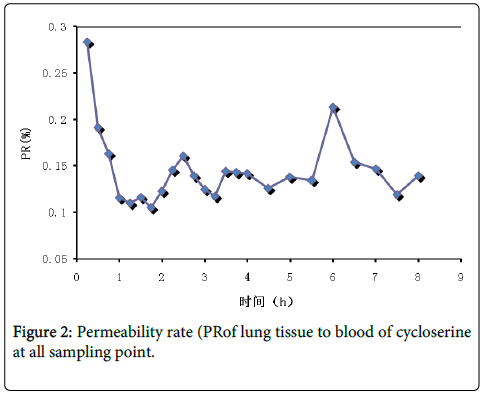 Antibacterial drug pharmacokinetics in local was the most important factor which decides its anti-infection effect. Testing drug concentration in lung tissue traditionally use whole lung tissue homogenate, saliva, respiratory secretions, pleural effusion, epithelial lining fluid especially bronchial alveolar lavage (BAL) fluid sampling [4]. But these methods can not accurately reflect the metabolism of free drug in lung interstitial fluid. Microdialysis is an emerging biological sampling technique, mainly using the principle of semipermeable membrane having permeability to small molecular compounds and material diffusion along a concentration gradient. Protein bound drugs at the testing site is trapped in dialysis membrane outside probe and the detected sample was free drug. Combined with the probe dialysis rate, sampling the material of extracellular fluid (ECF), can calculate the corresponding drug concentration in extracellular fluid of the target tissue in the same individual at dense time point [6]. Research shows that the microdialysis technique is a safe and effective way of assessing the pharmacokinetics of antimicrobial agents in lung tissue [7]. In vivo, real-time and continuous sampling can be performed without disrupting the normal physiological process. It also has the advantages of small amount of sampling, small interference of organism balance and direct determination of pulmonary free small molecule concentration. These have important significance in the research of drugs.

In microdialysis sampling, animal individual differences did not cause significant influence to probe recovery rate. Because the probe used in this experiment was the commercial CMA probe with stable physical property and the selected parts for microdialysis was relatively fixed, the microcirculation transport of drugs in different individuals was similar. The inter-individual differences of measured probe recovery observed is small. In this experiment, the blood and lung probe recoveries were 89 ± 4% and 86 ± 5%, higher than some of the previous microdialysis study [6,8,9]. The main reason was small molecule of cycloserine easily through the probe semipermeable membrane, so that the recovery rate increased

In this experiment, we observe the pharmacokinetics of cycloserine in lung tissue administered 250 mg every time refer to the minimum dosage for human body. The distribution coefficient from blood to lung tissue was 0.15 ± 0.2 and the penetration rate from blood to lung tissue has been maintained between 0.28 to 0.10, most located at about 0.15. We can see that the penetration rate of cycloserine to lung tissue is poor, probably because cycloserine was small molecular and water soluble substances. We all know that the drug concentration in lung tissue after administration was far lower than the drug concentration in blood (about 1/30 to 1/40 of concentrations in blood) [10]. While drugs with large molecular and lipid soluble could penetrated into lungs more easily. Rifampicin is an example of this type. Most antibacterial drugs have stronger ability of penetrating inflammatory tissues than normal tissues. The experiment is done on healthy rats. Whether the concentration of cycloserine in lung tissue will be higher when pulmonary inflammation or infection exist or if we administered oral dosing of 500 mg every time, the penetration rate would be higher? All these need further descriptive studies.

To kill Mycobacterium tuberculosis often requires combined action of multiple medications. So the treatment effect is very difficult to be judged by single effect of medicines. Treatment of multidrug resistant TB needs of long-term use of drugs more than five kinds. This is bound to the existence of the interactions between drugs.

Pharmacokinetic data in this body was obtained in health rats. But in practice, the AUC value in infected body often is not the same as in the healthy body. Therefore, in order to obtain the true cycloserine pharmacokinetics more accurately, we need to study further. For example, obtain kinetic parameters in infectious animals and patients or do experiments on combined administration of multiple antituberculous drugs. Since lack of theory and experience of MDRTB treatment with cycloserine, we need more laboratory research and clinical practice.