Pharmacokinetics of Orbifloxacin in Mehsana Goats after Intravenous and Intramuscular Administration

Copyright: © 2015 Ghanshyam D, et al. This is an open-access article distributed under the terms of the Creative Commons Attribution License, which permits unrestricted use, distribution, and reproduction in any medium, provided the original author and source are credited.

Single-dose pharmacokinetics of orbifloxacin (2.5 mg/kg bodyweight) were determined in clinically normal female mehsana goats (n=6) following intravenous and intramuscular administration. Orbifloxacin concentrations were determined by high performance liquid chromatography with ultraviolet detection. The concentration–time data were analyzed by non-compartmental kinetic method. Following a single intravenous injection, an elimination half-life (t1/2β) of 8.63 ± 0.130 h. Steady-state volume of distribution (Vdss) and total body clearance (ClB) were 2.99 ± 0.038 L/kg and 0.187 ± 0.002 L/kg/h, respectively. Following intramuscular administration, the elimination rate constant (β), the area under the curve from zero to infinity (AUC0-∞) and the mean absorption time (MAT) were 0.019 ± 0.001 h-1, 19.66 ± 0.216 μg·h/mL and 7.618 ± 0.549 h, respectively. The peak plasma concentration (Cmax) of 1.76 ± 0.010 μg/mL was achieved at 1.00 ± 0.00 h. The mean residence time (MRT) was 21.07 ± 0.478 h and the absolute bioavailability were 155.5 ± 2.487%, respectively. Orbifloxacin could be useful for the treatment of bacterial infections in goats that are sensitive to this drug.

Fluoroquinolones developed over the past few years have greater potency, a broader spectrum of activity, greater in vivo efficacy against resistant organisms and possess a better safety profile than other antimicrobial agents. Orbifloxacin is a third generation synthetic fluoroquinolone, an antimicrobial drug developed extensively for use in veterinary medicine [1,2] and it exhibits high bactericidal activity against Gram-positive, Gram-negative and Mycoplasma spp. [3,4] (Table 1). It is commonly used for infections of the skin.

The continuous interest in orbifloxacin has revealed several recent investigations describing their pharmacokinetic studies in pigs [5], cattle calves [2], cats [6], dogs [1,6-8], horses [9,10], goats [11], camels [12], rabbits [13], cattle [14], sheep [15,16] Japanese quail [17], buffalo calves [18] and chickens [19]. These studies have clearly revealed that the pharmacological basis of dosage regimen of orbifloxacin should be determined in the animals in which the drug is to be used clinically. However, no single study is done on the pharmacokinetics of orbifloxacin in goats in India till date. Therefore, we conducted pharmacokinetics of orbifloxacin in goats after intravenous and intramuscular administration.

Plasma proteins were precipitated by adding 1000 μL plasma and 1000 μL acetonitrile. The mixture was vortexed for 10 s and centrifuged at 1600 rpm for 10 min. Then, 250 μL of supernatant was diluted with 750 μL 0.067 M disodium hydrogen phosphate buffer (pH 7.5). Chromatographic separation was performed by using Chromatopak Peerless Basic C18 column (250 × 4.6 mm, 5 μ) at 40°C with an injection volume of 80 μL. The mobile phase (43:57) consisted of 430 volumes of buffer and 570 volumes of methanol with a flow rate of 1.5 mL/min. Buffer was prepared by dissolving 6.8 g of potassium dihydrogen orthophosphate in 1000 mL of water and by adding 3 mL of triethylamine. Then, pH adjusted to 2.5 with orthophosphoric acid. UV detection was performed at a wavelength of 320 nm. 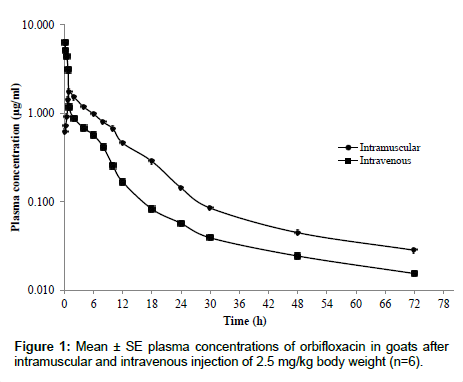 Orbifloxacin showed favorable pharmacokinetic properties, such as a long half-life and high bioavailability, with no obvious adverse reactions. This drug could therefore be an effective treatment in goats for a number of bacterial infections. However, further studies are needed to establish a multiple dosage regimen and clinical efficacy against susceptible organisms that infect goats.

None of the authors of this paper has a financial or personal relationship with other people or organizations that could inappropriately influence or bias the content of this paper.