+447482877761
Photo-Degradation of Amoxicillin, Streptomycin, Erythromycin and Ciprofloxacin by UV and UV/TiO2 Processes. Evaluation of Toxicity Changes Using a Respirometric Biosensor

Photo-Degradation of Amoxicillin, Streptomycin, Erythromycin and Ciprofloxacin by UV and UV/TiO2 Processes. Evaluation of Toxicity Changes Using a Respirometric Biosensor

Copyright: © 2015 Palmisano R, et al. This is an open-access article distributed under the terms of the Creative Commons Attribution License, which permits unrestricted use, distribution, and reproduction in any medium, provided the original author and source are credited.

Recently, drug residues contaminating water supplies and their ecological effects [1] has attracted scientific attention. These molecules are intended to induce useful physiological effects for diagnosing, treating or preventing diseases but have significant environmental and sanitary impacts. Partially metabolised by host enzymes, both unchanged antibiotics and pharmacologically active metabolites are excreted in urine and faeces [2,3]. Sewage treatment plants (STP) consequently receive large quantities of active drugs in wastewater, they are often incompletely removed, releasing significant quantities to the environment. Due to the widespread use and limited biodegradability of antibiotics, they are ubiquitous [4-6], persisting dependent on their chemical/physical characteristics. Erythromycin has a ½-life >1 year. Environmental drug concentrations range between nano- and micrograms/ litre, posing no risk of acute toxicity but possible dangers from chronic exposure [7]. Toxic effects depend on: dose, exposure duration, administrative route and characteristics of the exposed organism, their action on human subjects isn’t the only problem, environmental antibiotics can induce bacterial resistance [8,9], posing dangers to public health. Increasingly, infectious bacteria become resistant to available remedies. We seek to propose a photo-catalytic method to enhance water treatment and reduce pollutants to acceptable levels. Photolysis and photo-catalysis are compared and a photo-chemical method for removing antibiotics from water developed.

Preparation of solutions: Water Samples were weighed with an analytical balance and dissolved in distilled in volumetric flasks.

The procedure adopted for tablets was:

1. Grind finely and homogenously in a porcelain mortar.

5. Transfer supernatant using a pipette to a flask.

6. Add a further 8 mL of solvent, sonicate for 5 minutes, centrifuge and repeat step 5.

7. Repeat step 6 until all was dissolved.

8. Transfer powder to a funnel covered with filter paper and wash down.

9. Transfer rinse water to flask in step 5 and bring to volume.

The compositions and acidity were:

We followed progress using chromatograms of photo-degradation at set times by comparing the initial and final chromatographic peak areas with an HPLC UV-VIS data-logger (DrDAQ) recording analogue voltages. The Pico Log software employed processed the data on a PC and Peak Fit v 4.12 calculated the areas.

Using direct photolysis for photo-degradation is cheaper but less efficient than combining light with oxidizing agents. Heterogeneous photo-catalysis is oxidative, light enables solid semiconductors to catalyze photo-degradation. The positive aspects of this technology are its effectiveness on recalcitrant molecules, speed and cost.

The literature reports using semiconductors ZnO, CeO2, CdS, ZnS, etc as catalysts [21,22], the most efficient and commonly used semiconductor being titanium dioxide TiO2 [22-26] occurring naturally as: anatase, rutile and brookite, it’s photo-stable, insoluble and non-toxic [26,27]. We used anastase since several reports identify it as the best crystalline form [18,28]. A Lightning Cure LC8 Hamamatsu 9566-02 L UV lamp served to photo-degrade the drug solutions at wavelengths 240-400 nm. An optic fibre cable emitting UV light was inserted in a plywood structure housing a magnetic stirrer. Parallel TiO2 (DEGUSSA P25) catalyzed photolytic degradations served as controls. They were irradiated in 50 ISO/GL Duran glass bottles and 0.01 g TiO2 was added to assess the photo-stability of 20 mL samples as described above. Fractions awaiting analysis were kept in the dark to avoid photo-degradation. Catalytic degradation products were centrifuged at 10,000 rpm for 14 min, supernatants collected with Pasteur pipettes and centrifuged for 7 min at 10,000 rpm and analyzed.

Yeast respiration is sensitive to toxins, Clark amperometric electrodes Shown in figure 1 comprising an electrolytic cell with Pt/ Au cathodes and Ag/AgCl anodes separated by epoxy resin determine [O2], enabling evaluation of this inhibition. The electrodes on plastic supports are immersed in the electrolyte, behind a Teflon gaspermeable membrane, using a potential ~ -650 mV w.r.t the anode. Figure 1 At the cathode, O2 is reduced: 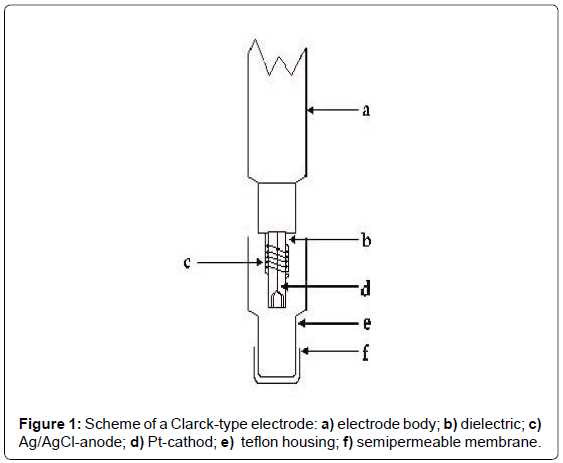 The current between cathode and anode is proportionate to the oxygen level outside the membrane. Yeast plates were prepared following Campanella et al. [30]. Culture plates were stored in a refrigerator upside down wrapped in parafilm for up to 15 days (before becoming inactive). A diskette tablet with diameter matching the electrode tip was etched from a plate and fixed outside the Clark electrode’s Teflon membrane, through a dialysis membrane and O-ring. This biosensor was immersed in 10 mL of distilled water at 25°C in a 50 mL beaker with a magnetic stirrer. 10 mL of 1M glucose was added when the electrode measuring ppm O2 without yeast respiration was stable. Glucose triggers yeast respiration, consuming oxygen and reducing the signal, (Δppm O2) B, when stable analysis was complete. After incubating the tablet for 3 hours, toxicity was assessed using the same process, it inhibited respiration, giving signal (Δppm O2)T. Plotting [O2] vs time yields curves resembling those in Figure 2. 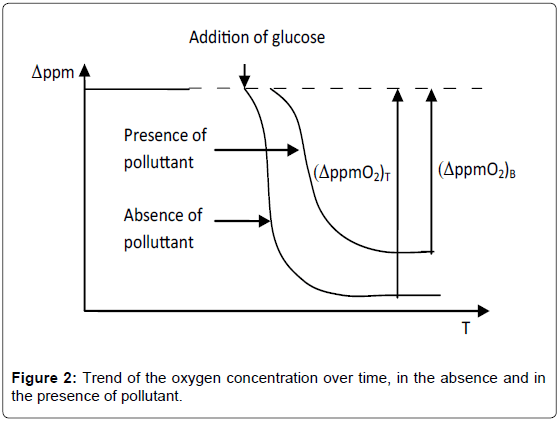 Figure 2: Trend of the oxygen concentration over time, in the absence and in the presence of pollutant.

Table 1 lists the Pelkin-Elmer Lambda 16 spectrometer readings from which the drug concentrations were chosen, [11,12] report their solubility.

Table 1: λ-max, concentration of the solutions used and water solubility.

Figures 3 and 4 show chromatograms of amoxicillin degradation by photolysis and by TiO2-catalyzed photo-degradation, they illustrate its sensitivity to the latter. After 30 min exposure to UV rays in the presence of catalyst is completely mineralized. Ciprofloxacin shows another trend, Figure 5 shows how drug concentration decreases with photolysis with different irradiation times and additional peaks due to degradation product formation. Active drug concentrations decrease rapidly with photo-catalysis, the by-products quickly disappear as irradiation progresses. Ciprofloxacin exposed to UV radiation, photolysis tests find rapidly decreasing drug concentrations, and after 30 minutes’ irradiation it’s almost completely photo-degraded. After 1 minute’s photo-catalysis, ciprofloxacin is almost completely degraded. Figure 6 shows results of photo-stability tests illustrating the The most relevant results of the photostability tests for the four drugs are show in figure 6. It is evident that the difference between photolysis (blue) and photocatalysis (red) is outstanding in the case of Amoxicillin and Streptomycin. Formulating a kinetic model for heterogeneous photo-catalysis reactions is complex; multiple reactions are possible subject to many parameters [25,33]. Adsorption need be considered in addition to degradation reactions and account taken of the unknown photo-degradation mechanism. Both photolysis and photo-catalysis degradation are first order kinetic reactions; often the Lagmuir- Hinshelwood model [16,18,34] accounts for our results. 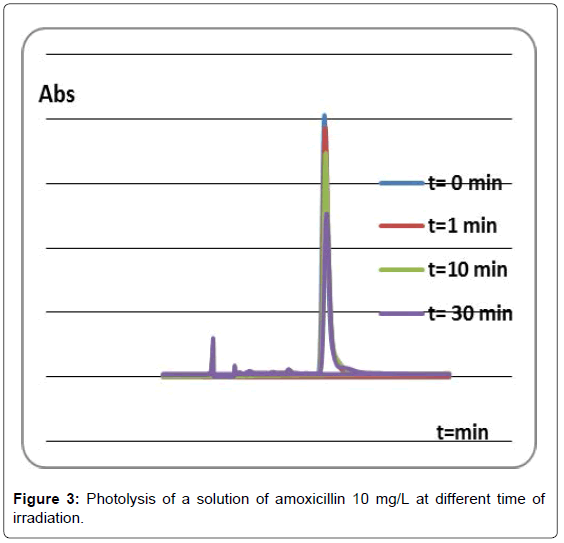 Figure 3: Photolysis of a solution of amoxicillin 10 mg/L at different time of irradiation. 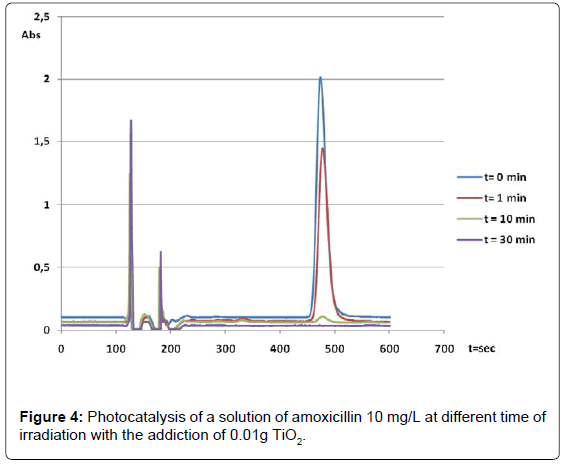 Figure 4: Photocatalysis of a solution of amoxicillin 10 mg/L at different time of irradiation with the addiction of 0.01g TiO2. 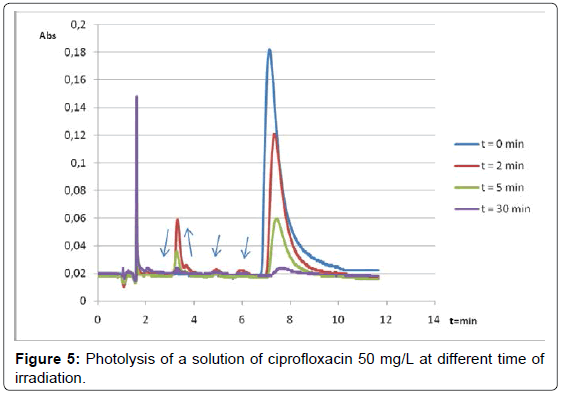 Figure 5: Photolysis of a solution of ciprofloxacin 50 mg/L at different time of irradiation. The kinetic constant k in a first order reaction is obtained by plotting - ln C/C0 against time, its gradient giving the rate constant, K. Table 2 and Table 3 reports its value for every antibioticsubject to photolysis and photo-catalysis

Table 2: K: Kinetic constants calcolated by the model of Lagmuir-Hinshelwood.

Table 3: The results of the toxicity tests are shown in the chart.

Photo-degradation reduces both active principle concentrations and toxicity. We evaluate the percentage respiratory activity inhibition (IAR) generated from the pollutant relative to a blank, calculated using:

Repeated respirometric observations were notably more reproducible when tablet thickness was controlled. It determines the amount of yeast collected, influencing oxygen consumption and creating a jump in the respirometric curve. This standard deviation of 1-2% ensures repeatability.

Table 3 compares the IAR values of solutions degraded in presence of TiO2 for 30 min and 15 h with those obtained by exposing yeast to solutions of the original molecules following incubation for ~ 3 hours.

Longer degradation times were needed for ciprofloxacin and amoxicillin to reduce toxicity to yeasts due to formation of toxic intermediates.

Table 3 Results of toxicity tests. IAR (inhibition of respiratory activity) of solutions of starting drugs and those exposed to TiO2 catalyzed photo-degradation for 30 min and 15 h after three hours incubation.

• Ciprofloxacin is most easily photo-degraded, followed by amoxicillin, streptomycin and erythromycin, the antibiotic most resistant to the experimental conditions.

• In all cases, heterogeneous photo-catalysis is demonstrated to be a powerful way to remove drugs from water and more effective than photolysis.

• Photo-degradation reaction products are shown to be less toxic than the original drugs, in certain cases longer reaction times are needed.

• Our research shows that complete drug abatement needs a combination of methods, emerging technologies need to be assessed.

This work was supported by University of Rome “La Sapienza”. The authors express their gratitude to the Analytical Lab. of Chemistry Department’s laboratory staff for their support during this study.