The work determines the different lethal concentration of Moringa oleifera bark extract as a piscicide. The sourced fishes (250) were acclimatized for 14 days. The test plant fresh bark was pounded into a macerated sample and soaked with distilled water for 48 hrs to simulate local procedures. Ten Clarias gariepinus juveniles were placed in each of the experimental aquaria and different test concentrations of 0 ml, 10 ml, 20 ml, 40 ml, 80 ml, 160 ml, 320 ml and 640 ml/l of water were used. The 48-hrs bioassay was conducted to determine sub-lethal concentration (LC50) for C. gariepinus juvenile to aqueous extract of Moringa oleifera bark. The 24-hrs and 48-hrs of LC50 of M. oleifera applied to C. gariepinus juvenile were 121.89 ml/l and 110.92 ml/l, respectively. Physical reactions exhibited by the fish including erratic movement, air gulping, loss of reflex, discolouration and molting. Mortality increased with increasing concentration of aqueous extract of M. oleifera bark and time of exposure in C. gariepinus juveniles. Moreover, the acute (LC100) effect that killed all the fish within 24-hrs was discovered to be the highest concentration of 640 ml/l. This findings provide evidence of Moringa oleifera as botanical piscicide for partial fish harvesting.

Plants extract are referred to as botanicals and when noxious to fish are called piscicides [1]. Such piscicidal plant contains different active ingredients known as alkaloids such as nicotine, pyrethrum, ryania, rotenone, coumerin, resin, akaummine, tannins, saponins and diosgenin [2]. However, these constituents are toxic to fish and other aquatic organisms at high concentration and wear off within a short time [3,4]. Aquatic ecosystem controls by synthetic organic compounds has been reported to cause contamination of waterways and this endangers organism living there in [5]. Synthetic organic compounds are identified with problems of environmental resistance, pest resurgence and detrimental effects on non-target organism because of their non-degradability [6]. Botanicals have broad – spectrum activities and can be extracted in commercial qualities [3]. They are biodegradable [7], less severe than synthetic chemicals [8] and easily reversed in fish subjected to chronic concentration [9], hence, do not create hazards like those experienced in synthetic ones, apart from the fact that plants are virtually an inexhaustible source of structurally diverse and biologically active substances [10]. One of these botanical is Moringa oleifera.

Moringa oleifera Lam is a tree belonging to the family Moringaceae, usually growing outside the forest areas of south western Nigeria [11]. It is the most widely cultivated species of a monogeric family, this rapidly-growing tree (also known as the horse radish tree, drustick tree, benzolive tree, kelor, marango, mlonge, moonga, mulangay, nebeday, saijhan, sajna or Ben oil tree) was utilized by the ancient Romans, Greeks and Egyptians; though, it is now widely cultivated and has become naturalized in many locations in the tropics [12]. However, there is fewer information in the literature as regards to the use of bark extracts of M. oleifera as an organic piscicide in aquaculture pond management in the developing world despite containing several piscicidal ingredients [13,14], therefore, this work aimed to ascertain the piscicidal effect of M. oleifera bark aqueous extract on C. gariepinus (African catfish) juvenile.

Two hundred and fifty healthy juvenile catfish (C. gariepinus) were sourced from a known farm with no history of disease outbreak. Ten catfish juvenile were placed in a 20 litre capacity translucent rectangular aquarium covered with transparent mosquito net to prevent fish from jumping out of the holding tank: aeration of dechlorinated water was constantly maintained. The fish was acclimatised for 14 days, and fed twice daily with commercial floating feed. Unused feed and faeces were siphoned out to prevent water contamination even though water was changed at regular interval. Feeding was stopped 24 hours prior to the experiment to empty the fish gastro intestinal tract and was not fed throughout the experimental period. Their weight and length were sampled randomly by picking three juvenile fish from each container and weighed on a sensitive scale while length was measured with tape ruler.

Fresh bark of the test plants was collected locally in the morning and taken to the Herbarium of Federal College of Wildlife Management, New Bussa, for identification. Two kg of the bark was cut into pieces with knife and later pounded with pestle and mortar to obtain macerated samples. Aqueous extracts was obtained by adding 4 litre of distilled water to the macerated sample to simulate local procedures [15] and left to ferment for 48 hours. Afterward, the plant extract was obtained by shaking before filtering using a dry Whatman filter paper, and used immediately to ensure its freshness.

Ten catfish juvenile were placed in a 20 litre capacity translucent rectangular plastic covered with transparent mosquito net to prevent fish from jumping out of the holding plastic during the experiment. The different test concentrations were used: 0 ml, 10 ml, 20 ml, 40 ml, 80 ml, 160 ml, 320 ml and 640 ml/litre of water. Fish mortality was observed and recorded for the first 3 hours, every 3 hour for the next 6, 12, 24 hour and subsequently every 24 hour until the time limit of 48 hour from the commencement of the experiment [16]. The inability of fish to respond to external stimuli was used as an index of death [17]. A fish was considered affected by the toxicant when it manifested erratic swimming behaviour, air gulping, loss of reflex, discolouration and pronounced ataxia coinciding with decreased capacity to respond to visual stimuli: A fish was considered dead when it failed to respond to mechanical prodding. The dead fish were removed continuously and counted for determination of lethal concentration (LC50).

The equation for the intercept of the regression line, a is;

Where y=intercept (constant by regression) (3)

The equation of the relationship was obtained from the plotted graph. Then, from the relationship, the LC50 of the M. oleifera was estimated for 24 hour and 48 hour. This was done by setting y to LC50 while a and b taking the values as:

The mean mortality of C. gariepinus juvenile, that were exposed to liquid extract of M. oleifera bark at different concentrations within 48 hours of assay shows 50% mortality which was recorded at 320 ml/l within 3 to 24 hours while 100% mortality was recorded at 640 ml/ within 12 hours with 90% recorded in the early 3 hours (Table 1).

The percentage (%) mortality of C. gariepinus juvenile exposed to different concentration of liquid extract of M. oleifera over the period of 48 hours was obtained from mean mortality. The corresponding probit value of percentage mortality and logarithmic value of each concentration used are shown in the Table 2.

So, the LC50 of Moringa oleifera bark extract at 24 hours can be calculated as Y is set at 5.0

Percentage (%) mortality was obtained from mean mortality over the period of 48 hours. The corresponding probit value of percentage mortality and logarithmic value of each concentration used was shown in Table 4. 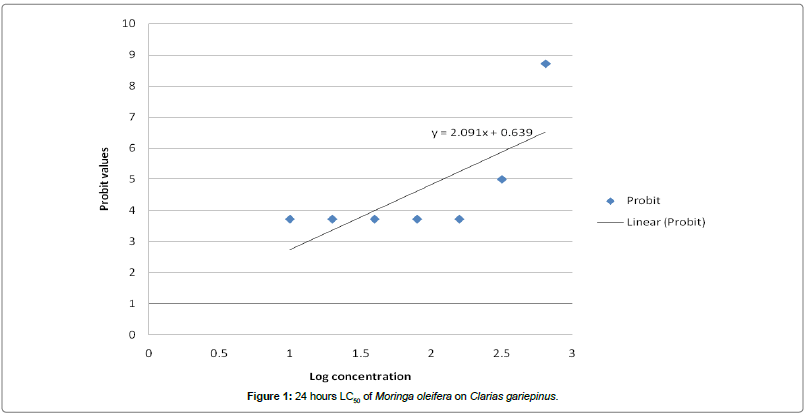 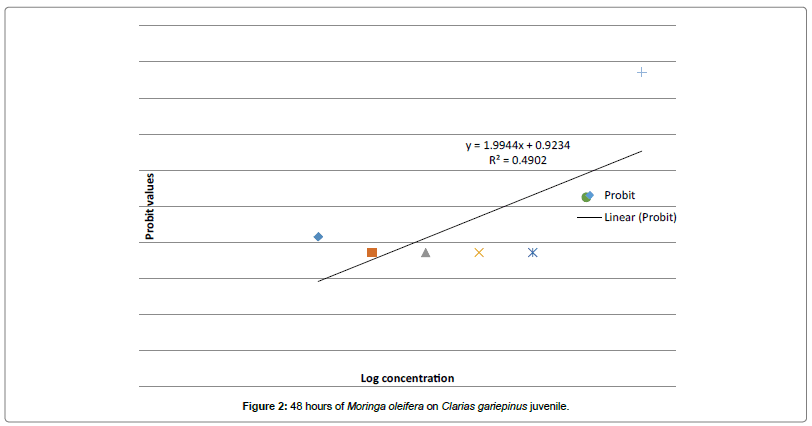 African catfish C. gariepinus juveniles exposed to aqueous extract of M. oleifera bark recorded nine mortality at the initial 3 hours for 640 ml/l concentration but no mortality in other treatments except for the sign of stress that fish displayed. The toxicity of M. oleifera in the study is in conformity with Fafioye et al. [18] who described stressful behaviour of Clarias gariepinus juveniles as a sign of respiratory impairment due to toxicity effect. It was observed that the treatment of lower concentrations was not relatively affected since they showed no form of discomfort. But, at higher concentration, the sign of discomfort increases with the increasing concentrations. This is in consonance with Ayotunde et al. who reported similar observation using Carica papaya seed powder [19]. The mortality of fish also increased as the concentration and time of exposure increased. The result of LC50 of M. oleifera bark which was 121.89 ml/l and 110.92 ml/l at 24 and 48 hour, respectively in the present study was more potent when compared with 252 ml/l, and 251 ml/l LC50 of aqueous extracts of M. oleifera seed at 24 and 48 hour of exposure, respectively [20] hence, this present result shows that M. oleifera bark is more potent piscicide to Moringa oleifera seed. However, this study is also in agreement with report from Adesina et al., Ayotunde et al. and Fafioye who have earlier worked on piscicides of plant origin [6,11,19].

Copyright: © 2017 Adelakun KM, et al. This is an open-access article distributed under the terms of the Creative Commons Attribution License, which permits unrestricted use, distribution, and reproduction in any medium, provided the original author and source are credited.