Copyright: © 2016 Kthiri H. This is an open-access article distributed under the terms of the Creative Commons Attribution License, which permits unrestricted use, distribution, and reproduction in any medium, provided the original author and source are credited.

In this paper, we will give a criteria of irreducible polynomials over q[X] where q is a finite field. We will present an estimation for the number of the Pisot-k power formal series, precisely we will give their degrees and their logarithmic heights.

Much is known about Pisot numbers, for example, if the integer coefficients of the minimal polynomial of

then a is a Pisot number. Also, for α∈s it is known that

One important theorem about Pisot numbers is that the set S is closed and there are many known ways to construct them.

Let α be a root dominate of polynomial

then α is a Pisot number. If

Definition 1.1: The reciprocal polynomial of a polynomial P is defined by

The minimal polynomial of a Salem number will always be reciprocal, and thus, there are no Salem numbers with odd degree or degree less than 4. Constructing Salem numbers is much more difficult than Pisot numbers. For instance, graph theory can be used to construct some but not nearly all. The smallest Salem number is still not known, though it is conjectured to be largest root of 1+z- z3- z4- z6- z7+ z9+z10.

They have defined new sets of generalized Pisot numbers and they have concerned with the arithmetic properties and limit points of one of these sets, Pisot-2 pairs (A pair of real distinct algebraic conjugates (α1, α2…, αk) is called a Pisot-k uplet or o(k)-Pisot number if α1, α2…, αk are greater than 1 and all remaining conjugates have modulus strictly less than 1) We denote the set of Pisot-k pairs by Sk For this set they have obtained some results analogous to those known about Pisot numbers. (α1, α2)∈S2)

A great deal is known about this set. Then, they have discussed another set, Pisot (o)-2 numbers, and its connections to Salem numbers, including a relationship with the infemum of Salem numbers. Finally, They have giving arithmetic properties of these Pisot (o)-2 numbers. In this paper, we consider an analogue of this concept in algebraic function over finite fields.

Recall that in 1962 Batemen and Duquettes introduced and characterized the elements of Pisot and Salem in the field of formal power series [3].

an algebraic integer over

and its minimal polynomial be

and this while establishing the same result with weaker hypotheses [4].

In the same setting and on the field of the real, Brauer, gave a criteria of irreducibility on

are of the integer such that

Chandoul, Jellali and Mkaouar are constructs the analog of the theorem of Brauer in the case of the polynomials to coefficients in q [X] [4].

, for all i≠d-1 then Λ is irreducible on

being given their n degrees and their logarithmic heights h This evaluation is illustrated in the following result:

The smallest Pisot number, in the real case, is the only real root of the polynomial x3-x-1 known as the plastic number or number of money (approximately 1,324718 But, as we have said, the smallest accumulation point of all Pisot numbers is the golden number. Chandoul, Jellali and Mkaouar are prove in [5] that the minimal polynomial of the smallest Pisot element (SPE) of degree n is P(Y) = Yn-αXYn-1-αn where α is the least element of Fq\{0} Moreover, the sequence (wn)n1 is decreasing one and converge to αX In the present paper we give generalized Pisot and Salem series in the field of formal power series over finite field. P(Y) = Yn-αXYn-1-αn

The paper is organized as follows. In this section, we give some preliminary definitions, we define Pisot numbers and Salem numbers. We give the well known properties of its. In section 2 we introduce the field of formal power series over finite field, we define a totally order, the lexicographic order, over a field of formal power series with coefficients in a finite field. In section 3 We give the arithmetic Properties of Pisot (o)-k series and the criteria of irreducible of this series.

a finite field of q elements,

the ring of polynomials with coefficient

the field of rational functions,

the minimal extension of

containing X and β and

be the field of formal power series of the form :

Define the absolute value by

Then |. | is not archimedean. It fulfills the strict triangular inequality

where the empty sum, as usual, is defined to be zero. Therefore

. As explained by Sprindzuk a non archimedean absolute value on

is complete and locally compact with respect to the metric defined by this absolute value. We denote by

an algebraic closure of

We note that the absolute value has a unique extension to

. Abusing a little the notations, we will use the same symbol |.| for the two absolute values. For all polynomial (P≠0)

We define the logarithmic hauteur

Where logqx designate the logarithmic function in the q basis. For all element algebraic w∈q((X-1)) one will note by

the logarithmic hauteur of his minimal polynomial.

is of Pisot number if and only if it exist

Moreover λ can be chosen to belong to

contains Pisot elements of any degree over

Indeed, consider the polynomial Yn-aYn-1-b where

it can be seen easily, considering its Newton polygon, that the polynomial, which is irreducible over q(X) has a root

such that |w|>1 and all of its conjugates in

have an absolute value strictly smaller than 1.

is called a series of Pisot-k uplet (o(k)-Pisot series ) if w1 integer algebraic such that |w1|,….|wk| are greater than 1 and all remaining conjugates have modulus strictly less than 1 We denote the set of Pisot-k uplet by

Then P is irreducible over

Now we show that P has two roots

For Y1 we have

Therefore Z1 is root of Polynomial irreducible and

For Y2 we have

Therefore Z1 is root of Polynomial irreducible and

Series of Pisot-2 of degree 3 on

Then P is irreducible over

because P and his reciprocal polynomial

are the same natures. However Q is of type (I) then it is irreducible. Therefore P is also.

Now we show that P has two roots

one root of P Then

Therefore Z1 is of type (I) and

In this section we discuss some basic arithmetic properties of

. It is known that

Also, we have that

where {x} denotes the fractional part of x. Our last proposition relates a specific subset of

to S′ The algebraic closure of

will be denoted by

the minimal polynomial of w and w = w1,... wd the conjugates of w. Then there exist exactly k conjugates w = w1,... wk of w that lie outside the unit disc. Let wk+1…wd denote the other roots of M.

We know that the product of any two algebraic is, itself, an algebraic. Since w1 is an algebraic, then

, wn a is also an algebraic. Let

be the minimal polynomial of wn1 . Now consider the embedding i of

and maps w1 to wi

are all the roots of P

(respectively. there are at least k+1≤j≤d such that

Proof. Let w1 be an Pisot series and w1.. wd its conjugates. By the proof of theorem 3.1, for all

are the roots of some degree d irreducible polynomial, pn in

Since, for k+1≤i≤d by definition

Clearly Q is unit, irreducible over 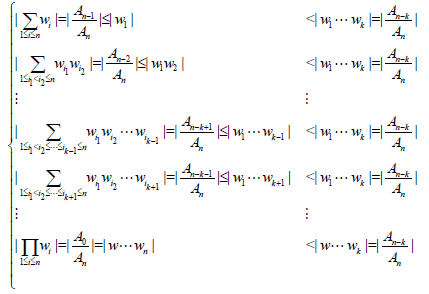 Second, Prove the sufficiency by the symmetrical relations of the roots of a polynomial. Let w = w1,... w2…. wn be the roots of P(Y) such that

on the other hand 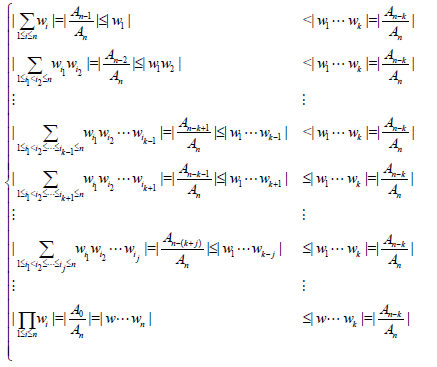 Corollary 3.6: Let P be the polynomial

then Λ has no roots in

Proof. By the previous Theorem Λ has k roots of modules >1 with a different value and the other roots are of modules <1 Let w = w1,...w2…. wn be the roots of P(Y) such that

witch is absurd. So Λ is irreducible on

be the are roots of the polynomial

Proof. By the Theorem 3.4, P has exactly k conjugates of w = w1,...wk that lie outside the unit disc and all remaining conjugates have modulus strictly less than <1 Let’s wi for i=k+1,…n witch | wi |<1 the authors roots of P. Show that Λ(Y) is irreducible.

By the condition of the Theorem, Λ(0)=λ0≠0 hence, all roots of the polynomial Λ(Y). are not equal to 0

Suppose in the first w1,...wk are the roots of Λ1 and the other roots are of Λ2 Clearly, the absolute value of leading coefficient of the polynomial Λ2 superior or equal 1 with is absurd because Λ2 has only roots wi such that

are the roots of Λ2, such that

and the other roots are of Λ3. Clearly, the absolute value of leading coefficient of the polynomial Λ3 superior or equal 1 with is absurd because Λ2 has only roots wi such that 0<|wi

the set of the element of Pisot-k series in

Proof. The set of the minimal polynomials of the elements of

By the consequence 3.5, we have 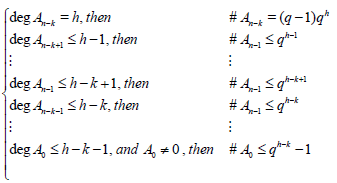 The presentation and estimation for the number of the Pisot-k power formal series, precisely we will give their degrees and their logarithmic heights.

I would like to thank Dr. Mabrouk ben ammar and Amara chandoul for all of his guidance and instruction, and for introducing me to the study of Pisot numbers.