Ganesh PS and Kumara Swamy BE*

Copyright: © 2016 Ganesh PS, et al. This is an open-access article distributed under the terms of the Creative Commons Attribution License, which permits unrestricted use, distribution, and reproduction in any medium, provided the original author and source are credited.

In recent years the development, design, fabrication and application of electrochemical sensors for the electroactive molecules has been of great interest in modern electroanalytical research [1-3]. Particularly in the development of voltammetric sensors for the quantification and determination of biologically important molecules such as folic acid has been received much more attention of young electroanalytical researchers [4,5].

Folic acid (FA) is a water-soluble vitamin-B that helps to build up the healthy cells. The deficiency of FA in human body leads to anaemia and is thought to increase the shells of heart attack and stroke [6]. FA deficiency causes failure to make the purines and thymine required for DNA synthesis and many studies suggests that diminished folate status is associated with enhanced carcinogenesis [7]. FA is a potential agent in preventing the growth of cancer cells by free radical scavenging and antioxidant property [8]. Per conceptual supplementation of FA has been demonstrated to significantly reduce the incidence and reoccurrence of neural tube defects, such as spina bifida of women [9,10]. The sensitive methods are required for the determination of FA in pharmaceutical and clinical diagnosis. There are so many research reports are there for the determination of FA such as, liquid chromatography [11], high performance liquid chromatography [12,13], flow-injection Chemiluminometry [14], Isotope Dilution-Liquid Chromatography/ Tandem Mass Spectrometry [15] and Spectrophotometric method [16]. As FA is an electroactive component, some electrochemical methods have been reported for its determination [17,18].

Uric acid (UA) is the major nitrogenous compound in the urine and it is a primary product of purine metabolism in the human body [19]. Its deficiency in human body leads to many diseases, such as gout, hyperuricaemia and Lesch–Nyan disease [20-22]. Hence, monitoringthe concentration of UA in biological fluids is very important. From the literature, various methods such as chemiluminescence [23-25], Chromatography [26], Capillary electrophoresis [27] are proposed. Compared with other techniques, the electrochemical method is more desirable because of the instrumental sensitivity, low cost, stability and quick response.

The problem is that at bare working electrode the voltammetric response of these biomolecules is less sensitive, least selective and gives poor voltammetric response. There are so many endless efforts to overcome this challenge. The widely accepted and common route is to use a modified electrode [28,29]. There are several methods to modify the bare carbon paste electrode either by mechanically grinding the different type of modifiers with the carbon paste [30,31] or by electropolymerisation of the modifier [32,33]. The modifier chosen for the present work is the Patton and Reeder’s reagent. It is a complexometric indicator extensively used in the field of analytical chemistry especially in the determination of the calcium ions. Swamy et al. , reported the detailed procedure for the fabrication of Poly (Patton and Reeder’s) modified carbon paste electrode [34]. The intension of our work was to fabricate a stable working electrode by electropolymerising Patton and Reeder’s reagent on the surface of carbon paste electrode and utilising its application as an electrochemical sensor for FA at physiological pH.

Graphite powder of 50 μm particle size was purchased from Merck and silicone oil from Himedia was used to prepare the carbon paste electrode (CPE). Folicacid (FA), Uric acid (UA) and Patton and Reeder’s reagent was obtained from Himedia. The stock solution of 25×10-4 M FA and 25×10-4 M UA was prepared in 0.1 M NaOH solution. Buffer used was 0.2 M Phosphate buffer solution (PBS) of pH 7.4. All the chemicals mentioned were all of analytical grade used as received without any further purification.

The electrochemical experiments were carried out using a model CHI-660 c (CH Instrument-660 electrochemical workstation). A conventional three electrode cell was used with a saturated calomel electrode (SCE) as a reference, a platinum wire as a counter electrode, and bare or Poly (Patton and Reeder’s) modified carbon paste electrode (MCPE) as a working electrode.

The bare carbon paste electrode (BCPE) was prepared by hand mixing of 70% graphite powder and 30% silicone oil in an agate mortar for about 45 min until a homogeneous paste was obtained. The paste was then packed into a cavity of PVC tube of 3 mm internal diameter and smoothened on a tissue paper. The electrical contact was provided by a copper wire connected to the end of the tube.

The paste packing procedure was same as that at BCPE. The electropolymerisationof Patton and Reeder’s reagent on the surface of CPE was achieved by using cyclic voltammetric technique. The CPE was scanned for 15 multiple cycles in an electrochemical cell containing aqueous solution of 1.0 mM Patton and Reeder’s reagent with 0.05 M H2SO4 with in the potential window of -0.4 V to +1.4 V at a scan rate of 0.1 Vs-1. After this the electrode was rinsed thoroughly with double distilled water. The same electrode was used for the voltammetric measurements.

Electrochemical polymerization of Patton and Reeder’s reagent on CPE 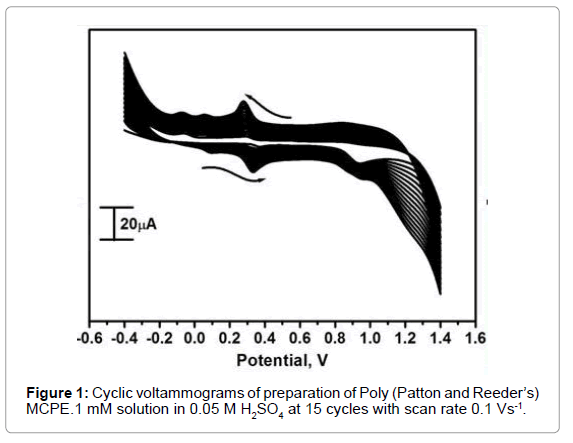 The extent to which the modifier has adhered on the surface of the CPE in the form a thin film was also has a significant contribution in the electrocatalytic property of the electrode. The coating was controlled by varying the multiple cycles on the CPE (from 5 to 20 multiple cycles). And the corresponding electrocatalytic activity towards the oxidation of 1 mM FA in 0.2 M PBS of pH 7.4 was investigated. From the Figure 2 it was observed that the maximum enhancement of anodic peak current was occurred at 15 multiple cycles. Therefore, at this multiple cycle the Patton and Reeder’s reagent can form a thin layer on the surface of CPE and facilitates the comfortable oxidation of FA. 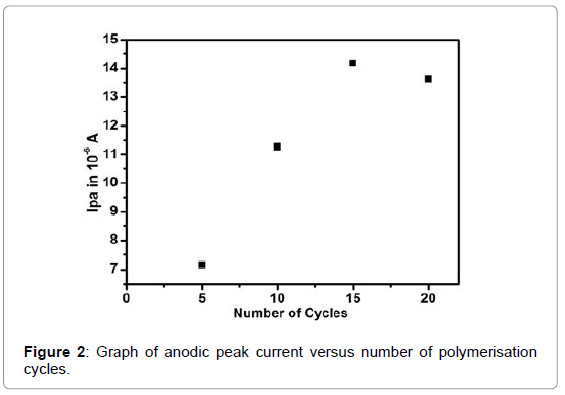 With the polymerisation cycles increasing the electrocatalytic response of FA increased at first. But when the polymerizing cycles is more than 15, the peak currents begin to decrease. This was due to the increase in thickness of the film that would prevent the electron transfer process [28]. Therefore, 15 cycles was used for all electrochemical analysis (Figure 2).

Electrochemical oxidation FA at of poly (Patton and Reeder’s) MCPE

The Figure 3 shows the cyclic voltammograms of 0.2 mM FA at BCPE and Poly (Patton and Reeder’s) MCPE at scan rate of 0.05 Vs-1 with supporting electrolyte 0.2 M PBS of pH 7.4. At BCPE the oxidation of FA showed poor sensitivity and the anodic peak potential was located at around 0.74 V (versus SCE). However, the voltammogram obtained for Poly (Patton and Reeder’s)MCPE (solid line) in the same condition was with high current signal with slight shifting in the anodic peak potential towards the negative side comparing to BCPE. The anodic peak potential was located at 0.67 V (versus SCE). This result of maximum enhancement in current signal and minimisation of over potential confirms the electrocatalytic activity of the fabricated Poly (Patton and Reeder’s) MCPE for the detection of FA [35]. The oxidation mechanism of FA is shown in Scheme 2 and Figure 3. 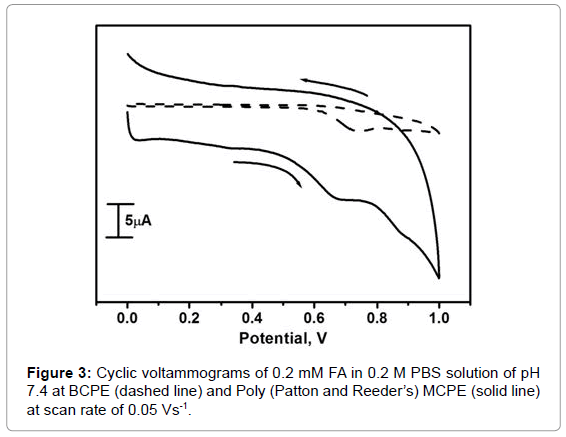 The effect of scan rate for 0.1 mM FA in 0.2 M PBS of pH 7.4 at Poly (Patton and Reeder’s) MCPE was studied by cyclic voltammetric technique. According to Randles-Sevcik equation the peak current is directly proportional to scan rate. The Figure 4 shows the increase of anodic peak currents with increase in the scan rate from 0.2 Vs-1 to 0.5 Vs-1. The graph of anodic peak current (Ipa) versus scan rate (υ) and Ipa versus square root of scan rate (υ1/2) were plotted as shown in Figure 5 and Figure 6 respectively. The graph obtained was with a good linearity between the Ipaandscan rates in the range from 0.2 Vs-1 to 0.5 Vs-1. The correlation coefficient was r2=0.9976, which indicates the electrode process was controlled by adsorption of the analytes [17,30,32]. 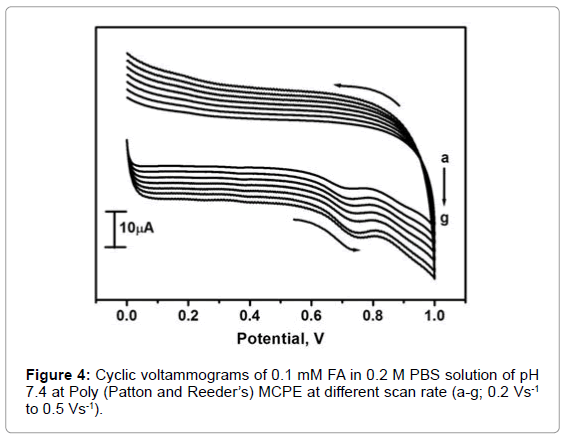 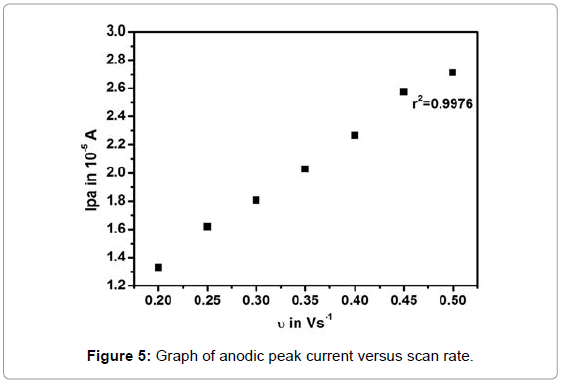 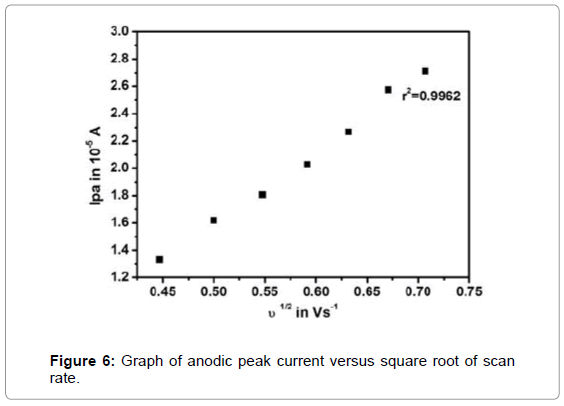 Effect of concentration on the peak currents of FA 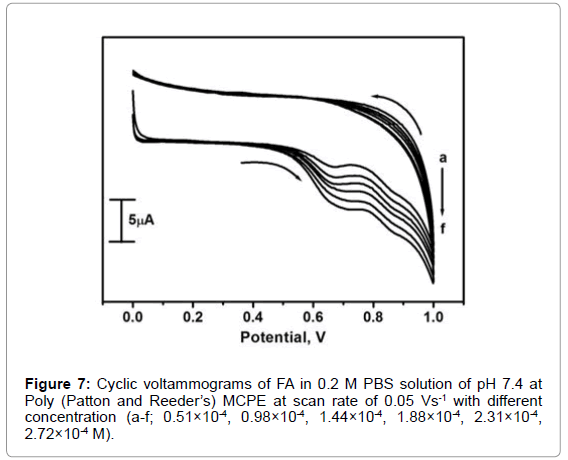 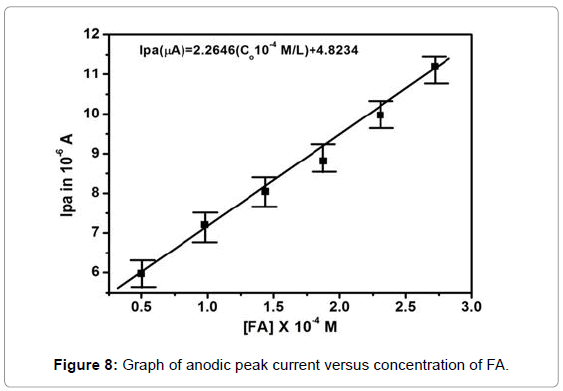 Figure 8: Graph of anodic peak current versus concentration of FA.

S is the standard deviation of six blank-solution measurements. M is the slope of the calibration graph. The LOD was calculated in the lower concentration range for FA and was found to be 18.8 nM for poly (Patton and Reeder’s) MCPE [5,7,36-40]. The comparison of detection limit of the FA with other modified electrodes was shown in Table 1 and it shows relatively lower limit of detection with the previously reported literature.

Table 1: Comparision of detection limit of FA with other modified electrodes.

Simultaneous determination of FA and UA

The Figure 8 shows the cyclic voltammograms recorded for the simultaneous determination of 0.1 mM UA and 0.2 mM FA in 0.2 M PBS of pH 7.4 at scan rate of 0.05 Vs-1. At BCPE (dashed line) the voltammetric response of the oxidation of these two analytes is with a low current signal and exhibited the poor sensitivity. However, in the same identical condition the voltammogram obtained for the Poly (Patton and Reeder’s) MCPE is with a higher current signal with improved sensitivity. The oxidation of UA and FA was appeared at 0.32 V and 0.67 V respectively. Hence, the Poly (Patton and Reeder’s) MCPE can also be used for the simultaneous determination of UA and FA (Figure 9). 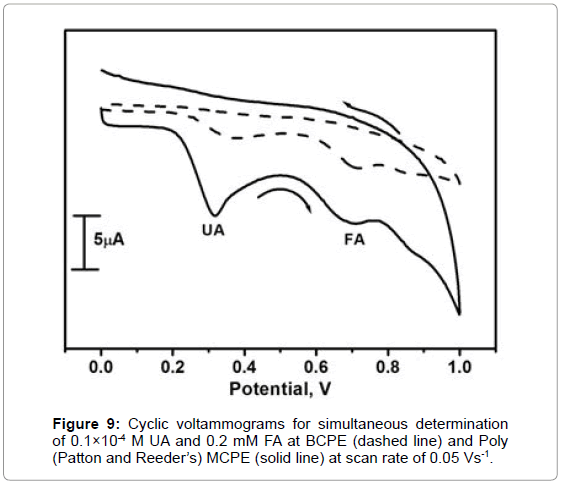 The Poly (Patton and Reeder’s) MCPE was used for the cyclic voltammetric determination of FA. The modified electrode shows improved sensitivity, selectivity, antifouling property and a good electrocatalytic activity towards the oxidation of FA when compared with BCPE. The limit of detection of FA is 18.8 nM by CV technique, which is comparatively much lower than other reported methods. The modified electrode can also be used for the simultaneous determination of UA and FA in a physiological pH of 7.4. A simple modification procedure was reported for the development of electrochemical sensor or biosensor for folic acid.