Copyright: © 2014 Razdan A, et al. This is an open-access article distributed under the terms of the Creative Commons Attribution License, which permits unrestricted use, distribution, and reproduction in any medium, provided the original author and source are credited.

Allele frequencies and applicable forensic statistics for all the loci are displayed in supplemental Table 1. All loci are polymorphic in all populations. Y-indel is the least informative marker as it has only two alleles. After Bonferroni correction [6] (p-value=0.05/21=0.0024 for HWE test and 0.05/21=0.00024 for LD test), no locus was departed from HWE and no pair of loci were departed from LD.

An MDS plot, based on Fst distances, of the India populations and four US major populations (i.e., Caucasian, African American, Hispanic, and Asian) [7,8] are generally consistent with geographical distances or population admixture history (Figure 1). 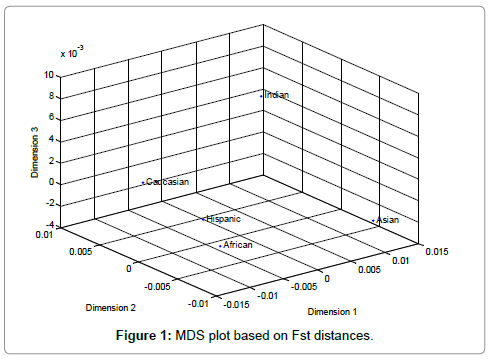 This study supports that the autosomal STR loci amplified with the GlobalFilerTM Express Kit have high discrimination powers in Indian population. The allele frequencies can be used in forensic and paternity testing cases.