Copyright: © 2016 Kar SK, et al. This is an open-access article distributed under the terms of the Creative Commons Attribution License, which permits unrestricted use, distribution, and reproduction in any medium, provided the original author and source are credited.

Coronary artery aneurysm is an uncommon complication after balloon angioplasty and stent insertion but not rare. A sixty three years old male presented with acute onset chest pain after 1 year of stent insertion in RCA (Right coronary artery). Investigations revealed RCA aneurysm with stent thrombosis. This was managed successfully by surgical resection of aneurysmal sac and removal of the occluded stent with ligation of RCA followed by distal RCA anastomosis under femoro- femoral bypass during meticulous dissection of the aneurismal sac followed by CABG under cardiopulmonary bypass.

Coronary artery aneurysm (CAA) is a rare entity, presenting in few individuals. Giant aneurysm is really very uncommon and patients may present with variable symptoms. Coronary aneurysm is rather a complication of angioplasty as well as a consequence of drug eluting stent implantation. The incidence of CAA is 1.5% - 5% in patients undergoing angioplasty [1]. CAA in patients with coronary artery disease is usually atherosclerotic in origin. Other causes of CAA are Kawasaki disease (mucocutaneous lymphnode syndrome), autoimmune disease (polyarteritis nodosa, systemic lupus erythematosus, scleroderma), coronary artery dissection, trauma, infection, congenital malformation [1,2]. Due to very limited reporting of such case; this area is still unclear regarding its course, prognosis and management.

A sixty three year old man with history of hypertension and type 2 diabetes mellitus for last 15 years presented with acute onset chest pain. He was suffering from exertional dyspnoea since last 2 months and occasional palpitation for the same duration. One year back he was admitted in the hospital with complaints of chest pain, sweating, palpitation and pedal oedema. At that time ECG had revealed right bundle branch block and inferior wall ischemia. Echocardiogram was consistent with inferior wall Myocardial Infarction. At that time coronary angiogram showed significant disease in RCA (Figure 1) and a minor plaque in LAD. Angioplasty of the RCA was performed and patient was then treated with drug eluting stent implantation in the RCA and discharged from the hospital with an uneventful course. Patient was quite well under medical treatment in the post stent period for 8 months without any chest pain. Since the last two months patient developed acute onset chest pain and dyspnoea and was therefore admitted to the hospital. On clinical examination his pulse rate was 72 beats/ min, blood pressure 140/92 mmHg. On auscultation there was ejection systolic murmur along the left lower parasternal area. Chest X ray showed cardiomegaly and mediastinal widening (Figure 2). Echocardiogram revealed an aneurysm originating from RCA (Figure 3) and was compressing the right chambers of the heart. True and false lumen was remarkably appreciated. Aortic root was mildly dilated with mild AR, mild MR, TR and decreased LV function. Left Ventricular Ejection Fraction was found to be 40%. Coronary angiogram revealed that there was no flow through RCA stent (Figure 4). There was an aneurismal dilatation of RC cusp and associated with long segment diffuse disease of RCA. 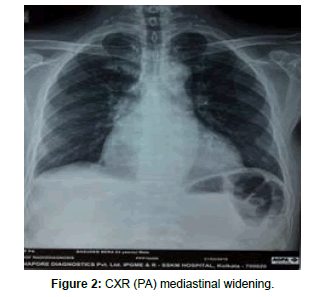 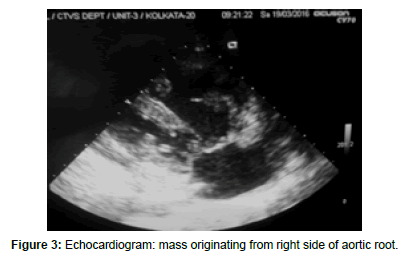 Figure 3: Echocardiogram: mass originating from right side of aortic root. 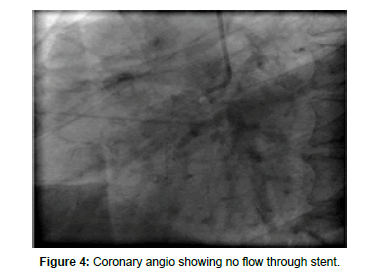 Coronary artery angiogram revealed the proximal RCA opened into a large (60 mm diameter) spherical cavity (Figure 5) that filled with contrast medium in a swirling fashion with slow opacification, without a shunt or fistula. The stent in the RCA was totally occluded with no flow through it. CT angiogram was performed and it revealed normal LMCA, proximal diffuse disease of LAD, D1 stenosis at origin. Large vessel was bifurcating into large branches (Ramus). There was mild stenosis proximal to its bifurcation by diffuse soft plaque with good distal flow. LCX was nondominant and ostium was clear. RCA was the dominant vessel and was totally occluded from the level just distal to its origin up to its bifurcation with a stent in situ in proximal and mid RCA and intra stent occlusion. There was large lobulated pseudo aneurysm (60 mm×55 mm) with a narrow neck at proximal RCA just distal to RCA origin but proximal to the proximal end of the stent (Figures 6-8). There was a large thrombus surrounding the patent lumen of the pseudoaneurysm along right atrio-ventricular groove. There was also myocardial scaring and thinning in inferior wall, postero-lateral wall and apical region. So the patient was emergently posted for CABG with the plan excision of aneurysmal sac and definitive coronary revascularization 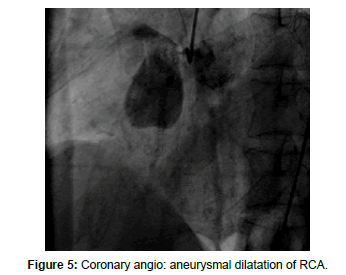 Median sternotomy was performed. After sternotomy, it was found that the aneurismal sac was diffusely adhered to all the surrounding structures and it was very difficult to dissect out IVC (inferior venacava) and aorta for cannulation because of the risk of rupture of the aneurismal sac. That is why one venous cannula was inserted in the left femoral vein and other second venous cannula was put into SVC. The left femoral artery was also cannulated to receive the oxygenated blood. After initiation of cardiopulmonary bypass aorta was cross clamped and root cardioplegia was opted for arresting the heart. Through a fine dissection the aneurismal sac was opened and it was found that the sac was filled with organized thrombi. All the thrombi were removed. The stent was traced and it was found to be hanging freely into the aneurismal sac cavity (Figures 9 and 10). The stent was taken out. RCA was identified through the aneurismal sac and flush ligation of RCA was performed. The distal RCA was next grafted with a reverse saphenous vein from the aorta. Left internal mammary artery was anastomosed with LAD and sequentially to D1. Patient was shifted to postoperative recovery after completion of operation with inotropic support was put on elective mechanical ventilation. Patient was extubated at 12th postoperative hour and postoperative course was uneventful. The histopathological examination revealed that aneurysm was athermatous and the aneurysm wall was thick with medial calcification and hyalinization. 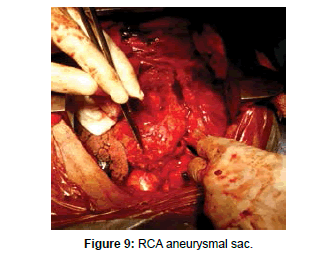 The first pathologic description of a coronary artery aneurysm (CAA) was reported in 1761 [3], while the first clinical case was reported in 1812 [4]. CAA is defined as a localised dilatation of coronary artery more than 50% diameter of adjacent normal segment. The definition of giant CAA is still controversial. It is defined as a dilatation that exceeds the reference coronary artery diameter by four times or has a diameter more than 8 mm [5]. The diameter of giant CAAs in adults varies from 50-150 mm in various publication and only a few cases have been described in the literature. The incidence of CAA in RCA is 68%, for LAD 60% and 50% in case of LCX whereas only 0.1% in LMCA [6,7].

This rare entity shows male predominance1. This may be fusiform or saccular [8]. CAA is rare but giant aneurysm is rarer still. The incidence of giant CAA in patient with atherosclerosis is as few as 0.02% [1]. The incidence of giant CAA according to literature reported that 52.2% in RCA, 19.4% in LAD, 7.4% in LCX, 13.4% in LMCA and 4.5% in combined RCA and LAD [9]. Though patient with coronary artery disease, CAA is associated with atherosclerosis; diabetes and chronic hypertension are also contributing factors. The advancement in drug eluting stent implantation also increases the incidence of CAA as found in this present case report. It has been found that there are multiple causes of stent related aneurysm. The drug eluting stent contains immunosuppressant such as Sirolimus which is anti-inflammatory. It may also contain chemotherapeutic agent like Paclitaxel which inhibits cell proliferation with the sole intention to preserve intaluminal stent diameter and patency for longer duration than bare metal stents. The polymer of drug eluting stent in which drug is embedded may cause hypersensitivity reaction and vaculitis that can erode the vessel wall and weaken the wall resulting in subsequent dilatation of the segment of coronary artery [1,2,10,11]. Turbulence of blood flow and balloon angioplasty may also injure the vessel wall which can lead to subsequent CAA [1].

Patient may be asymptomatic with CAA. However, angina pectoris, myocardial infarction, sudden death, perforation, embolism, fistula formation, rupture or tamponade even congestive cardiac failure may be the presenting symptoms [1,12-17].

Congenital aneurysms of RCA have also been reported to rupture into the pericardial space, causing cardiac tamponade [18] or into RA leading to congestive cardiac failure. However, giant CAA is usually found in elderly and may present as a mediastinal mass, intracardiac mass or SVC (superior venacava) syndrome [12,19-24].

The differential diagnoses of such a case may include , aneurysm of ascending aorta, pulmonary trunk, cardiac tumour, pericardial tumour or thymoma [1]. CAA has always the inherent tendency to rupture [22]. The risk of rupture increases in patients more than 40 years of age, presence of angina pectoris, congestive heart failure, infective endocarditis or distal embolization [25].

Angiography is the gold standard for diagnosis and echocardiography has some additive value in such rare scenario. Advanced imaging techniques like multislice CT-angiography, MR-angiography are also needed to confirm the extent and severity of the diseased process [19,26].

In this case report, the femoral artery was cannulated for initiation of CPB for safety measure to decompress the aneurysm and exsanguinate the ventricle before dissecting the adhesion. This measure has been followed to avoid the chance of aneurysm rupture as done in previous established literature [15]. Prognosis of CAA though is controversial; 5 years survival rate is 71% [1,2]. Treatment modalities are different according to presenting pathophysiology. Several reports have shown diversities of management protocol. Depending on the symptoms, etiology and associated lesions; treatment such as medication, stent implantation or surgical excision of the CAA with a resection or ligation technique may be opted. Small aneurysms, can be treated with anticoagulation and antiplatelet drugs [1] and complications like thromboembolic episodes can be avoided, though reports on long term prognosis is dubious [27].

Surgery is the choice for giant aneurysms. Complete resection of aneurismal sac followed by reconstruction and isolation with concomitant coronary artery bypass is the gold standard of management [27]. Closer of fistula must be done in cases of CAA with fistula [28]. Infective endocarditis following CAA must be treated with antibiotic intravenously. In the recent era percutaneous intervention has been suggested in the literature [29] though it is restricted for debilitated very sick patients. Different methods of percutaneous approach have been described depending on the anatomical diversity of the aneurysm and variable anatomy of coronary circulation [30].

Giant CAA is rare but not uncommon in atherosclerotic heart disease patients. Balloon stent is a very common procedure done in the cardiac catheterization laboratory but this is not free from complications. Post stent coronary artery aneurysm is a dreaded complication and can lead to sudden death. Therefore this uncommon but life-threatening situation must be addressed promptly and judiciously with appropriate treatment modality, depending on the pathophysiology so as to avoid complications and reduce fatality.