+44-7447-215064
Post-Operative Neurological Observations, Are You Getting What You Ordered? | OMICS International

Post-Operative Neurological Observations, Are You Getting What You Ordered?

Copyright: © 2016 Buchanan D, et al. This is an open-access article distributed under the terms of the Creative Commons Attribution License, which permits unrestricted use, distribution, and reproduction in any medium, provided the original author and source are credited.

Introduction: An audit at our spinal unit in 2006 highlighted the need for a consistent approach to neurological observations in spinal surgery patients. A protocol was therefore introduced for use throughout the hospital. The aim of this audit was to assess compliance with protocol for post-operative neurological observations over the course of two subsequent audits.

Materials and Methods: This was a retrospective audit. Patients selected were those admitted to the spinal unit in May 2006, February 2012 and August 2014. The case notes of 39 patients who had spinal surgery were reviewed against our gold standards on post-operative neurological observations. The mean age of the patients was 46 years (17 years to 80 years). The procedures performed included decompression, fusion, scoliosis correction, discectomy and tumour excision. Each patient’s case notes were examined to identify whether an operation note was produced, whether neurological observations were requested and if so, how frequently and whether this requested was complied with during the post-operative period. The location of the patients was also noted, as well as if any deterioration was reported to a doctor and if they subsequently acted accordingly.

Results: Over the period of three consecutive audits an overall improvement was seen regarding compliance with the standards set out in the protocol.

Conclusion: Clinical audit was used to highlight problems with post-operative monitoring of neurological function in spinal patients; further evaluation and implementation of the recommendations resulted in sustained improvement in delivery of healthcare.

Neurological observations following any form of spinal surgery are an essential part of post-operative patient care [1]. These observations are the first warning that the spinal cord function is suboptimal. There are several potential causes of a loss of spinal cord function, however, in most circumstances the common causes are either a haematoma or overcorrection of a spinal deformity [1,2].

In 2006, a patient in our spinal unit who had undergone spinal deformity surgery, developed a bilateral foot drop which was unrecognised over the first post-operative night. Whilst this deterioration was managed promptly when recognised the next day with a full recovery, this episode highlighted that our processes for postoperative neurological assessment were not as robust as was assumed.

This paper details the results of these three audits over two complete audit cycles, reporting the effect on the post-operative neurological assessment through the use of a structured audit based approach.

The first audit of these standards was performed in 2006. This audit, highlighted that there were difficulties with the way these observations were recorded and acted upon at our spinal unit.

A re-audit in 2012 closed the audit loop and whilst improvements had been made, deficiencies were noted and as such, further recommendations were made.

A further audit was performed in 2014 to determine compliance with the expected level of care and the process of escalation in the event of a concern in the neurological status following spinal surgery.

On each occasion, the audit was registered and approved via local review. Ethical approval was not required as audit is a systematic review of normal patient care. Data collection was performed for any patient undergoing spinal surgery during the three separate time periods of each audit cycle: May 2006, February 2012 and August 2014. Data was collected using case note review and assessed the actual neurological observations performed against the expected standards. On each occasion, the audit was performed ‘unannounced’ in order to ascertain a true reflection of clinical practice. The standards were expected to be met in 100% of cases and were as follows:

• The frequency of requested neurological observations should be adhered to, as a minimum, in recovery room, high dependency unit and wards

• Doctor should review patients and act on results promptly Compliance with the audit standards

Standard 1: The frequency of neurological observations should be documented in the post-operative instructions.

The documentation of the frequency of post-operative neurological observations required improved over the course of the three audits from 14% to 63% to 17 of the 19 patients, 90% in the final audit (Figure 2). 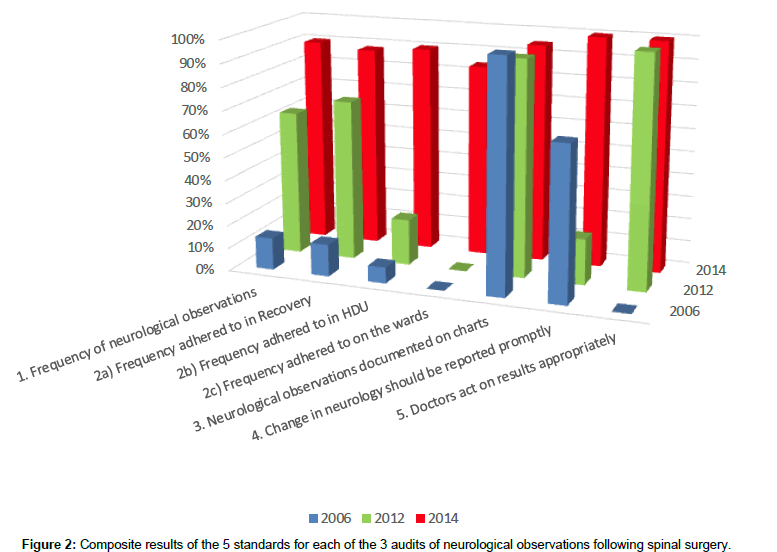 Figure 2: Composite results of the 5 standards for each of the 3 audits of neurological observations following spinal surgery.

Standard 2: The frequency of requested neurological observations should be adhered to, as a minimum, in the recovery room, high dependency unit (HDU) and the ward.

Standard 3: Neurological observations should be documented on charts.

Neurological observations were documented on the charts in 100% of patients in the first audit and in 94% and 95% of the two subsequent audits.

Standard 5: Doctors should examine the patient and act appropriately on these results.

The doctor did not examine two of the three patients in Audit 2006 following being informed of a change in neurological examination. In Audit 2012 and Audit 2014, all patients were examined and acted promptly on the findings.

Clinical audit can be viewed as having limited benefit and in some settings it is found to be under resourced [3], in others it is met with scepticism [4]. This could be due to audit being performed for ‘for audit’s sake’ rather than there being true engagement with each of the five elements of audit [5], to ensure results are reflected upon and recommendations implemented to bring about change. The Department of Health white paper “Working for patients” [6], emphasizes systematic audit of clinical and practice related issues as a means of improving the quality and efficiency of health care delivery. Dazley et al. [7] argue that clinical audit is essential in spinal surgery. It closes the loop between evidence based medicine and clinical practice.

The authors believe that during the course of eight years when these three audits were performed, the process of audit and the department’s actions to improve practice using standardized proforma and education brought about true reform. Whilst these audits are each of small size from one institution, the authors propose that the process of audit and subsequent recommendations that were implemented have improved practice in neurological observations following spinal surgery.

The General Medical Council and the Royal College of Surgeons of England have emphasised the importance clear documentation of the operative procedure and post-operative instructions. This is reflected in the increasing availability of the operation notes and postoperative instructions for the nurses. There are several ways of constructing an operation note, however, whether handwritten, dictated or created through a computer interface, clear and unambiguous instructions for the post-operative care of the patient need to be available for all staff at an early stage. These instructions may well then indicate a pre agreed protocol which is standard care across a group of patients, again to eliminate the possibility of confusion in delivery of post-operative care. In particular, when this Department agreed locally on a standardized regularity of post-operative neurological observations after the audit in 2012, compliance improved dramatically from 70%, 20% and 0% to 88%, 90% and 84% in recovery, high dependency unit and the ward respectively.

The protocol for post-operative neurological observations following spinal surgery was introduced in our unit following the results of the first audit in 2006 by the senior author. The audit cycle was closed and the compliance with standards reassessed in 2012 and again in 2014.

The process of repeated audit of expected standards of care has demonstrated an improvement in compliance to the standards for neurological observation in all areas. Importantly, following the audit in 2006, in those patients where there was a neurological concern observed, concern was promptly raised by nursing to medical staff who acted accordingly. There were no neurological deficits seen in any of the cohorts who were part of this audit.

In particular, the process of education and re-evaluation identified poor documentation of neurological observations on the ward which was addressed and was much improved in the audit of 2014. Education and re-audit to assess compliance and reinforce practice, closing the audit cycle has and will continue to drive up standards for this group of patients. This is in line with the work of Haves et al. [8] who showed that by closing the audit loop and ongoing audits the intra and postoperative stroke rates associated with carotid endarterectomy.

This paper reporting 2 audit cycles, shows that when problems are identified, standards implemented, education provided and care then reassessed against the standards, there is sustained and ongoing improvement [6,7]. There is still room for improvement as the compliance should be 100% for all the standards evaluated. Whilst every effort was made to find the relevant information in the medical records, it is possible that there was misfiling of neurological observation charts within the patient’s hospital records or that this information had been lost, even though it had been completed correctly. Inclusion of any cases in which the neurological observation charts were incomplete in this report is appropriate as missing or misfiled records will then reflect a ‘worst case’ scenario. If records are not retrievable there is no evidence that procedures were carried out which would potentially have medico-legal ramifications [9].

This paper describes the result of three audits rather than research. As such, outcome data was not collected as part of this review of practice and was out of the remit of the project. As compliance with our recommendations has now improved, further research into outcomes prior to and following improvements would be valuable to ascertain the audits real effect.

The processes used and lessons learned here are applicable to other areas of medicine. Standardising care with regards to its documentation and frequency, with regular education of staff and frequent re-audit can bring about real improvement in practice. We recommend the use of a standardized proforma and documentation chart as the minimum standard for the assessment of post-operative neurological observations in spinal surgery.