Copyright: ©2015 Gilbert S, et al. This is an open-access article distributed under the terms of the Creative Commons Attribution License, which permits unrestricted use, distribution, and reproduction in any medium, provided the original author and source are credited.

Traumatic lung herniation through the chest wall is a rare clinical entity. Trauma may cause displacement, distortion and deficiency to the tissues of the chest wall which aids lung herniation. Here, we present a 68 year old gentleman who has sustained blunt injury to the left chest due to fall from a height after alcohol intake. He was treated with analgesics for musculoskeletal pain and then he was treated with antiplatelet for suspected angina. CT thorax shows a herniating left lower lobe that results from a defect in the sixth intercostal space and dislocation of the rib at the costochondral junction. Surgical repair for the defect was performed successfully and the patient was discharged home on the 6th post-operative day. There was no evidence of recurrent hernia at his 3-month follow-up visit.

Herniation of lung is seen uncommon clinically. Lung hernia is defined as the protrusion of lung through one of its bounding structures [1]. We report a case of lung herniation following fall from a height after alcohol intoxication. He was misdiagnosed as angina and treated with anti-platelets

A 63 years old gentleman had fall from a height after a bout of alcohol intake and intoxication. Following this, first he was treated at a local hospital with analgesics and then for angina with anti-platelets. He was observed under emergency for one day after the incident. He has pain over the left lower rib cage on deep breathing and coughing. On chest examination bluish discoloration (bruising) was seen all over the site (6th and 7th ribs anteriorly). There was no laceration in the skin, the swelling was compressible and wide gap could be felt in 6th inter costal space. On examination, the vital signs are noted as pulse=98/ min, blood pressure=110/60 mmHg. Respiratory rate=34/min, oxygen saturation=92%, afebrile, On local examination an ill defined, nontender, soft swelling 12 × 5 cm was present in the sixth ICS with positive cough impulse. Hemogram was normal. 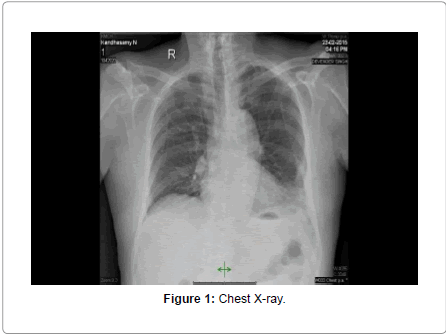 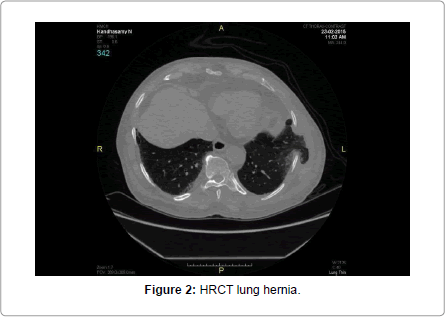 The patient was advised surgical repair and informed consent was taken. He was taken up for surgical repair and incision was given for antero lateral thorocotomy in the 6th ICS. The entire length of parietal pleura and inter costal muscles were found to be lacerated from costal attachments to mid axillary line. There was dislocation of the 7th costal cartilage along with lower rib cage. The defect is measured to be 16 cm. There was no rib fracture or lung contusion. The diaphragmatic attachment to the costal margins was torn. The herniated left lower lobe was first reduced into the pleural cavity. Secondly, we fixed the 7th costal margin to sternum using number 2 sternal wire. Then the diaphragm tear was repaired using 3/0 prolene with interrupted sutures. Finally, the 6th and 7th ribs were approximated using interrupted pericostal 1/0 prolene sutures (Figure 3). Also, the routine three layer closure of chest wall was done. 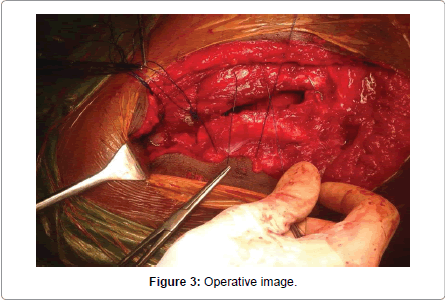 The patient was shifted to ICU and extubated after 6 h. Postoperative period was uneventful and he was discharged on 6th day.

Lung hernia is classified according to the anatomic location such as cervical, thoracic, diaphragmatic or mediastina [2]. According to the etiological classification it can be congenital or acquired. Acquired hernias are further classified as traumatic, consecutive, and spontaneous or pathological [3]. Traumatic is due to weakness of chest wall developed as a result of penetrating chest wound, surgical intervention, fractured rib etc.

In our case it is possibly due to the dislocation of costochondral junction from sternum (anteriorly) because there is lack of external intercostal muscle in this case particularly. Secondly, there could be a possible increase in intrathoracic pressure due to violent cough due to COPD.

Diagnosis is generally made in the presence of soft crepitant protrusion which is reducible on quiet respiration and again bulges forward on coughing or valsalva’s maneuver. The defect in chest wall was palpable. CT thorax confirmed the diagnosis.

The following condition must be considered for differential diagnosis such as subcutaneous emphysema, cold abscess, emphysema necessitans and lipoma/angioma

A variety of surgical procedures have been described, most of which includes using both autologous tissue such as muscle or fascia layers and synthetic mesh layers [4,5]. Wien’s et al. has described use of laminar hooks as used in spinal injuries [6].