Journal of Fundamentals of Renewable Energy and Applications
Open Access

Lignocelluloses biomass (e.g. sawdust obtained from wood) provides a unique and sustainable resource for environmentally safe organic fuels and chemicals. Furthermore, due to the abundance of lignocelluloses materials, its conversion to ethanol (a biofuel) is considered one of the most important uses of biomass as an energy source in the modern world especially in the United States, Europe and Asia [1]. Ethanol produced from biomass could be of great benefit to the transportation sector where it is assumed that 2/3 of Nigeria’s gasoline is consumed. Globally, fossil fuels are being threatened out of dominance over other fuels by: The high international market price of fossil fuels, the negative effects of fossil fuels products on the environment e.g. the release of greenhouse gases like carbon dioxide that contribute to global warming. The pollution of air, water, and soil by fossil fuels products (carbon dioxide from fossil fuel combustion accounted for nearly 80% of global warming in the 1990s [2].

By far, the greatest proportion of the world’s energy requirements comes from petroleum exports especially in the Middle East, a region of high political tension. These reasons have necessitated efforts at finding alternatives to fossil fuels. Lignocelluloses wastes (LCW) refer to plant biomass wastes that are composed of cellulose, hemicellulose and lignin as well as other minor components. Both the cellulose and hemicellulose fractions are polymers of sugars and are thereby potential sources of fermentable sugars, which can be converted into other products.

Currently, the second generation bioproducts from lignocelluloses biomass such as bioethanol, biodiesel, biohydrogen and methane are increasingly being produced from wastes (residues) rather than from energy crops (jatropha, switch grass, hybrid poplar and willow) because the latter competes for land and water with food crops that are already in high demand. The use of food crops such as corn and sugarcane to produce biofuels is increasingly being discouraged due to the current worldwide rise in food prices. In order to minimize foodfeed- fuel conflicts, it is necessary to integrate all kinds of bio-waste into a biomass economy [3]. Furthermore, the use of lignocelluloses wastes offers a possibility of geographically distributed and greenhouse-gasfavorable sources of products [4].

The Energy Commission of Nigeria reported that the fuel-wood resource constitutes 2.8% of the total renewable energy resources in Nigeria. Biomass reserve in Nigeria is put at 80 million m3, which equals to an equivalence of 1.645 billion tons of energy which is predicted to be potentially available for the next 100 years [5]. Lignocellulose is the most abundant renewable biomass with a worldwide annual production of 1 × 1010 MT [6].

A biofuel is a fuel that is produced through contemporary biological processes, such as agriculture and anaerobic digestion, rather than a fuel produced by geological processes such as those involved in the formation of fossil fuels, such as coal and petroleum, from prehistoric biological matter [7]. Biofuels can be derived directly from plants, or indirectly from agricultural, commercial, domestic and/or industrial wastes. Renewable biofuels generally involve contemporary carbon fixation, such as those that occur in plants or microalgae through the process of photosynthesis [8].

Bioethanol is an alcohol made by fermentation, mostly from carbohydrates produced in sugar or starch crops such as corn, sugarcane or sweet sorghum waste. Cellulosic biomass, derived from non-food sources, such as trees and grasses, is also being developed as a feedstock for ethanol production. Ethanol can be used as a fuel for vehicles in its pure form, but it is usually used as a gasoline additive to increase octane and improve vehicle emissions. Bioethanol is widely used in the USA and in Brazil. The principle fuel used as a petrol substitute for road transport vehicles is bioethanol [10].

Bioethanol fuel is mainly produced by sugar fermentation process, although it can also be manufactured by the chemical process of reacting ethylene with steam. There is also ongoing research and development into the use of municipal solid wastes to produce ethanol fuel.

Ethanol or ethyl alcohol (C2H50H) is a clear colourless liquid; it is biodegradable, low in toxicity and causes little environmental pollution if spilt. Ethanol burns to produce carbon dioxide (CO2) and water, it is a high octane fuel and has replaced lead as an octane enhancer in petrol. By blending ethanol with gasoline we can also oxygenate the fuel mixture so it burns more completely and reduces polluting emissions [11].

Ethanol fuel is the most common biofuel worldwide, particularly in Brazil. Alcohol fuels are produced by fermentation of sugars derived from wheat, corn, sugar beets, sugar cane, molasses and any sugar or starch from which alcoholic beverages such as whiskey, can be made (such as potato and fruit waste, etc.). The ethanol production methods used are enzyme digestion (to release sugars from stored starches), fermentation of the sugars, distillation and drying [12].

The present work was carried out basically from the production of bioethanol from saw dust as it is important to utilize wastes such as sawdust which are usually burnt and as such polluting our environment. Sawdust can be utilized to produce bioethanol through fermentation. Hence, there is need to research on how the yield of the sawdust can be improved upon.

Source and collection of sample

The sawdust from Milicia excelsa wood was obtained at the M. O. Ojuola Sawmill opposite Chicken Republic, Road Block, Akure, Nigeria. The sample was collected in a clean plastic bag and transferred to the Department of microbiology laboratory of the Federal University of Technology, Akure, for the experiment.

Preparation of the sample

Determination of the viable bacterial count of samples

Serial dilution of the (Milicia excelsa ) sawdust was done before and during fermentation. The pour plate method was used. From the fermented sawdust of (Milicia excelsa ), 1 ml of the liquor was drawn aseptically with the aid of a sterile syringe and dispensed into 9 ml of distilled water in the first test tube (101). The first test tube was shaken thoroughly and 1 ml taken from it was transferred into the second test tube, which was also shaken thoroughly. The dilutions were repeated up to (109). 0.2 ml was then drawn aseptically from this dilution and was transferred into some Petri dishes already labeled.

The Petri dishes were agitated gently in circular motion to ensure even distribution and uniform growth of the organisms. The media were allowed to solidify. Plates containing Nutrient agar were incubated in an inverted position at 37°C for 24 hrs while plates containing Potato Dextrose Agar were incubated at 24°C for 72 hrs. MRS plates were incubated anaerobically. The analyses were carried out at 0, 24, 48, 72, 92 and 120 hrs. All the colonies were counted manually and then multiplied by the corresponding dilution factor. The experiment was replicated.

Isolation and identification of bacteria and lactobacillus isolates

The appearance of the colony of each isolate on the agar media was studied and characteristics such as shape, colour and size were observed. The physiological characteristics were done by Gram staining, motility test [13] and spore staining [14].

This was done based on the cultural, morphological and microscopic examination of the colonies [17].

Spore counting was carried out by counting the number of visible spores that appears on the plates. Calculation of spore forming unit (sfu) per ml for fungi was based on the volume of the sample used.

The mineral content was analysed from the solution obtained by first dry-ashing the sample ash in 10% (Vol/Vol) HCl, filtered and made up to mark in a 100 ml volumetric flask using distilled deionised water.

Table 2: pH before and during the fermentation of Milicia excelsawood sawdust.

Table 3: Temperature before and during the fermentation of Miliciaexcelsa wood Sawdust.

Table 4: Total titratable acidity before and during the fermentation of Milicia excelsa wood sawdust.

Table 5: Occurrence of microorganisms before and during thefermentation of Milicia excelsa wood sawdust. 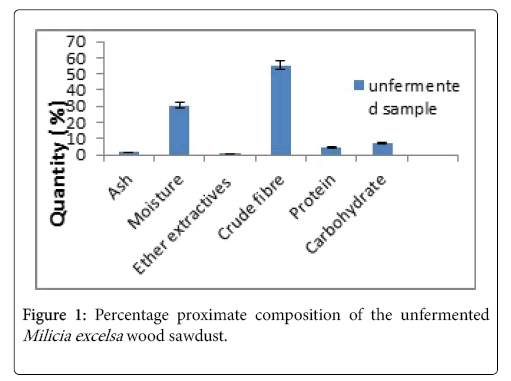 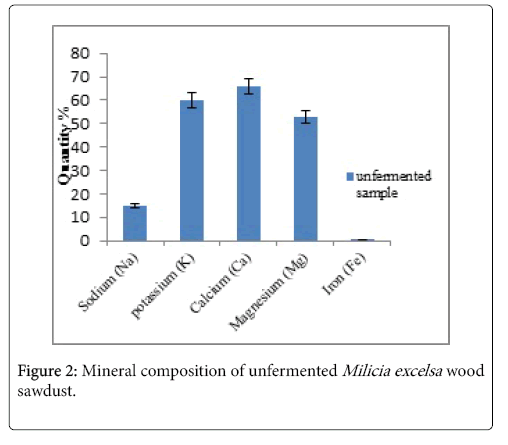 Table 6: Bioethanol generated after the fermentation of Milicia excelsawood sawdust. 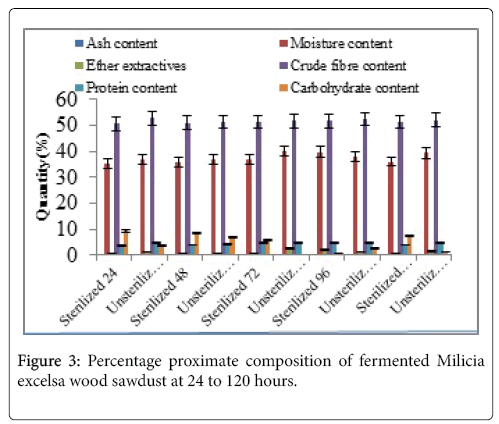 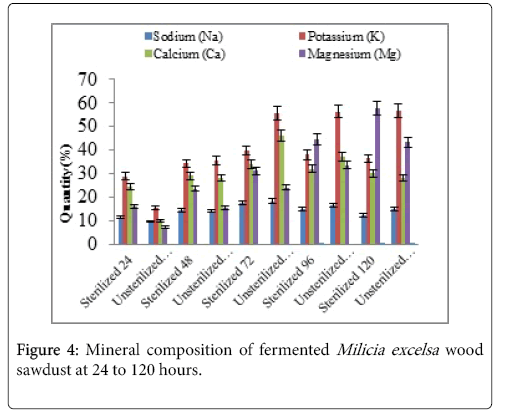 Some of the organisms isolated before and during the fermentation process belong to the lactic acid producing bacteria i.e., Lactobacillus plantarum . Others include Staphylococcus aureus, Clostridium cellulovorans, Micrococcus spp, Bacillus spp, Saccharomyces cerevisiae (yeast), Aspergillus niger, Rhizopus spp, and Mucor mucedo as represented in Table 5.

Lactic acid producing bacteria are a group of Gram positive bacteria, non-respiring, non-spore forming, cocci or rods that produce lactic acid as the major end product of the fermentation of carbohydrates. Lactic acid bacteria carry out this reaction by the conversion of carbohydrate to lactic acid plus carbon dioxide and other organic acids without the need for oxygen. They are described as microaerophiles as they do not utilize oxygen. Lactobacillus plantarum a homofermenter produces high acidity in all vegetable or plant fermentation and this plays the major role. The homofermenter convert sugars primarily to lactic acid [19]. Yeast however is a unicellular fungus which reproduces asexually by budding or division especially the genus Saccharomyces. Most yeast require an abundance of oxygen for growth, therefore by controlling the supply of oxygen, their growth can be checked. In addition to oxygen, they require a basic substrate such as sugar. Some yeast can ferment sugars to alcohol and carbon dioxide in the absence of air but require oxygen for growth. They produce ethyl alcohol and carbon dioxide from simple sugars such as glucose and fructose. Yeasts are fairly tolerant of high concentration of sugar and grow well in solution containing 40% sugar [20].

The presence of lactic acid during the fermentation helps to produce an acidic medium in the substrate and the presence of yeast helps to ferment the sugar in the sawdust for the effective production of bioethanol. The sugars in wood are polysaccharides (cellulose, hemicellulose and lignin) and cannot be broken down easily by the yeast. For the yeast to be able to act on them effectively, the sugar has to be broken down to simpler sugars (monosaccharides) such as glucose which the yeast can ferment to produce high yield of bioethanol [21]. And to do this, the sawdust must be hydrolyzed in chemicals such as Sulfuric acid to convert the cellulose to glucose (pretreatment). Hydrolysis is the process of breaking the glucosidic bonds that hold the glucose basic unit together to form a large cellulose molecule [22]. The pre-treatment is carried out to increase the surface area and accessibility of the plant fiber to enzymes and thus achieve sugar yield for ethanol fermentation [23].

Organisms such as the Lactic acid producing bacteria and yeast have brought about the fermentation of Milicia excelsa sawdust. Saw dusts are often regarded as waste and are mostly discarded or burnt causing environmental pollution. But based on this experiment, this research showed that Milicia excelsa wood sawdust has the potential for Bioethanol production. Therefore, can be concluded that sawdust is not waste that should be discarded but can be renewed into useful products such as bioethanol through the process of fermentation. The use of lignocellulose (sawdust) for bioethanol production reduces greenhouse gas and soot (black carbon) emission and this means a greatly reduced global warming impact. Further research is ongoing as to increasing the yield of the bioethanol produced through utilization of the total sugar in sawdust which is largely composed of cellulose lignocellulosic.

Copyright: © 2018 Adegunloye DV, et al. This is an open-access article distributed under the terms of the Creative Commons Attribution License, which permits unrestricted use, distribution and reproduction in any medium, provided the original author and source are credited.