© Copyright The Authors: Published by Library Publishing Media. This is an open access article, published under the terms of the Creative Commons Attribution Non-Commercial License (http://creativecommons.org/licenses/by-nc/2.5). This license permits non-commercial use, distribution and reproduction of the article, provided the original work is appropriately acknowledged with correct citation details.

In the USA, NHL is the fifth prominent position of new cancer cases among men and women. In 2002, 2.8% of all cancers were NHL worldwide. NHLs are more common in the developed countries (Cheng and Walkom, 2008). DLBCL, the most common subset of NHL, is clinically heterogeneous so that only 40% of patients respond to current treatments and have prolonged survival, while the remainders are submitted against the disease. Using microarray technology, systematic patterns of gene expression are examined in B-cell malignancies (Alizadeh et al, 2000). In order to study the behavior and function of cells, it is possible to investigate the expression levels of thousands of genes simultaneously using microarray technology (Ho et al, 2006). Different levels of gene expression in DLBCL lead to differences in tumor proliferation rate, host response and the different situation of tumor (Alizadeh et al, 2000). Accordingly, the survival time of cancerous patients can be estimated based on gene expression profile (Bovelstad et al, 2007).

The discovery of the relationship between survival time and tumor expression profiles provided the possibility to achieve more accurate diagnosis and more advanced treatment (Bovelstad et al, 2007). In survival analysis, the time to reach an event may sometimes be censored. In this case, using the standard statistical methods is not possible. Many methods are introduced for such data (Ma et al, 2006; Martinussen and Scheike, 2009). One of the most popular methods is Cox proportional hazard model. In the classic situation in which the number of sample n is larger than the number of variables p (i.e., n>p), the parameters of regression are estimated by maximizing Cox partial likelihood function, but in microarray data in which the number of sample n is smaller than the number of variables p (n<p), using this method alone may not be appropriate (Bovelstad et al, 2007).

In this historical cohort, which was performed in 2010, we used DLBCL dataset including 4026 genes expression obtained based on array method of complementary DNA (Alizadeh et al, 2000). Data are available from: http://llmpp. nih.gov. The dataset contained survival time of 40 DLBCL patients. The desired event was death due to DLBCL disease and response variable was survival time of DLBCL patients after chemotherapy. Almost 45% of the survival time of patients was right censored.

To predict survival of patients with DLBCL based on gene expression, we combined Cox regression model (1) with seven dimension reduction methods (Bovelstad et al, 2007). A popular survival hazard function is introduced by Cox in the form:

In partial least squares regression (PLS), PLS components were similar to the principal components except that the PLS used combinations that were correlated with survival time. There were many methods to perform PLS for Cox regression. We used the method which was proposed by Nygard et al (Bovelstad et al, 2007; Nygard et al, 2008).

In order to evaluate the selected methods, dataset was split randomly into two parts, the training-set including a sample of 27 for estimation of the regression coefficients and the test-set including a sample of 13 for evaluating the performance of prediction model (Bovelstad et al, 2007). Data splitting was repeated 50 times randomly because if we used only one split of the data, it was not known to which extent the values of resulting criteria may depend on the actual training/test randomization (Bovelstad et al, 2007).

The estimation of parameters (

train) for each dimension reduction method was obtained through the following two stages. First, the optimal tuning parameter value (

train) was defined using the 10-fold cross-validation, then the specified

train. For each ith patient in the test set, prognostic index (PI) was estimated as follows (Bovelstad et al, 2007);

where, xi was gene expression vector for ith patient in the test set.

The performance of a method was appropriate when the PI described the actual survival time of patients. There are different criteria to evaluate how well the survival times are described. The criteria which were examined in this study included log rank test, prognostic index test and deviance (Bovelstad et al, 2007).

In log rank test, patients in the test set were divided into two groups based on the median of

the index. To evaluate the performance of this grouping, log rank test was applied. The P value was used as a basis for evaluation (Bovelstad et al, 2007).

Prognostic index is a criterion in which the

index is used as a continuous covariate in a Cox regression model. The P value of the likelihood ratio test was considered as basis for evaluation (Bovelstad et al, 2007).

Also, deviance is a criterion in which the difference in deviance between the fitted model and the null model is computed as 2[l(test) (

train train and zero, respectively. Its P value is used as a basis for evaluation (Bovelstad et al, 2007).

In these criteria, the comparison of the fitted model was done with the null model in which all PIs were zero and was equivalent to the model with no gene expression for prediction. Three criteria were calculated for each of the seven dimension reduction methods in 50 training/test split of data and the median of each criteria was considered as basis for evaluation. The smaller values of the criterion expressed the better performance of prediction (Bovelstad et al, 2007).

In order to determine the influential genes on survival time for PCR, SPCR, PLS and ridge regression methods, different cut points were tried. Cut point is an index for keeping or removing predictive variable according to its Cox regression coefficient. For standardized variables, the coefficients close to zero express a little effect on the outcome. Therefore, the variable can be excluded from the model. Different values of cut point resulted in different number of variables. The cut point value is determined based on sample size. MATLAB r2008a and RKWard statistical programs were used for data analysis.

The survival time of the patients ranges from 1.3 to 129.9 months. The median survival time, using Kaplan–Meir approach, was 32.5 months. Figure 1 shows the box plots of P values resulted from three performance criteria for seven prediction methods in 50 training/test split of data. Accordingly, ridge regression method shows the smallest median among the three criteria and thus has highest capability of prediction. The spread of box plot diagrams represents difference between the results of one split to another. 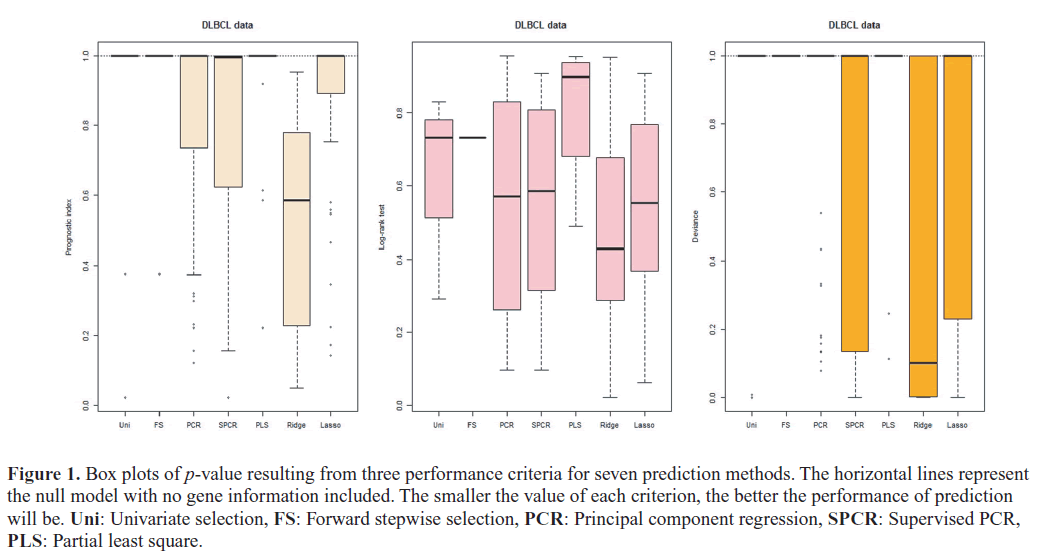 Ridge regression is a shrinkage method. Sixteen genes had absolute values greater than the cut point of 0.06 (Table 1). Finally, four out of 16 genes were selected using forward stepwise selection in last step using Cox regression model (P<0.05). Table 2 shows the coefficients, hazard ratios and their 95% confidence intervals for these four genes. According to the estimated prognostic (PI) index and the three mentioned criteria, these four genes had the highest capability for prediction (P<0.001). Based on calculated hazard ratio, four genes were diagnosed as influential factors on DLBCL survival. The expression of genes GENE3555X and GENE3807X decreased the survival time (P=0.008 and P=0.003, respectively), whereas the expression of genes GENE3228X and GENE1551X increased survival time (P=0.002 and P<0.001, respectively). It was indicated that, based on three mentioned criteria, ridge regression had higher capability of prediction than other dimension reduction methods. Based on the pre- determined cut point for ridge regression coefficients and using forward stepwise selection of Cox survival model, four genes were diagnosed as influential genes on DLBCL survival. Accordingly, these genes can predict the survival time of the patients with DLBCL, if they are used simultaneously. The expression of genes GENE3555X and GENE3807X can decrease the survival time, whereas the genes GENE3228X and GENE1551X may increase survival time. Based on the previous biological studies, the expression of genes GENE3807X (Dugan et al, 2009; Li et al, 2009), GENE3228X (Song et al, 2007; Zhang et al, 2009), GENE3555X (Hastie et al, 2000) and GENE1551X (Gerli et al, 2002; Burnstock, 2006) could affect the cancer cells and thus any disorder in expression these four genes could alter the prognosis of the patients.

Hastie et al performed a study on the same dataset using gene shaving method. Their method identified a small cluster of genes expression three of which were highly related to the survival including GENE3807X, GENE3555X and GENE3228X (Hastie et al, 2000). Sha et al proposed a Bayesian variable selection approach. They selected a set of four genes as being associated with DLBCL survival, one of which was GENE3228X (Sha et al, 2006). Ando et al proposed kernel mixture modeling method and reported a set of 20 genes including GENE3555X which could be used for prediction of both cancer type and survival of cancer patient (Ando et al, 2004).

An important limitation of the present study was that gene expression was not specified for a large part of the dataset. Deletion of this large part of dataset may prone the results of the present study to selection bias. In addition, we could not assess the effect of the reported genes on the pathogenesis or progress of DLBCL; hence, we suggest that the pathogenic effect of these genes being evaluated in the future studies. These genes were similar with those genes that we obtained in this study.

Lossos et al measured 36 genes concerning DLBCL survival in 66 patients using univariate Cox regression model. They entered six genes in Cox regression that had the score statistics greater than 1.5, and examined model validation using two other dataset. The genes were LMO2, BCL6, FN1, CCND2, SCYA3 and BCL2 (Lossos et al, 2004). These genes were dissimilar with those genes that we obtained in this study. A possible reason for this discrepancy is that the methods of gene selection were different. In addition, based on the three criteria used in this study, ridge regression method was much more powerful than the other methods such as univariate Cox regression model which was used by Lossos.

This study indicated that ridge regression method has higher capability than other dimension reduction methods for prediction of survival time in patients with DLBCL. Furthermore, a combination of statistical methods and microarray data can help detecting influential genes in survival time.