Copyright: © 2017 Gwani AS, et al. This is an open access article distributed under the terms of the Creative Commons Attribution License, which permits unrestricted use, distribution, and reproduction in any medium, provided the original author and source are credited.

The study of human foot and its impressions has countless implications in medico-legal practice. The foot and its impressions are unique to an individual and its dimensions are known to be reliable in the prediction of biological profile. A significant number of regression equations for the prediction of biological profile are derived from foot dimensions in weight bearing living subjects. With respect to the weight applied to the foot, arches of the foot are able to deform and reverse to normal alignment, changing the shape and size of the foot. Deformities of those arches are capable of affecting the foot dimensions as well. However, from a forensic perspective, there is a paucity of literature discussing the effect of body weight and arch height on foot dimensions or their effect on the accuracy of biological profile prediction. This article, therefore, briefly discusses the forensic implication of the foot and the effect of body weight and arch height on the accuracy of the regression equations derived from weight bearing subject as well as subjects with arch deformities.

The study of the human foot and its impressions has countless implications in medico-legal practice [1-4]. Certainly, due to the increasing frequency of mass disasters and the likelihood of recovering isolated pedal elements in such circumstances, forensic experts may sometimes be confronted with nothing rather than foot to determine the biological profile a victim [4,5]. Indeed, the main task of a forensic podiatrist is to contribute to the establishment of personal identity through a careful examination of a pedal structure [4,6]. Establishing personal identity significantly reduces the pool of potential identities from documented missing persons [4]. Estimation of biological sex, for example, has been considered to be the initial and fundamental step for establishing the biological profile of an individual and is known to reduce the pool of possible matches by about half [7-9].

The task ahead of a forensic anthropologist has gone beyond the traditional study of human skeletal remains [10]. Undeniably, the modern roles of forensic anthropology incorporate both the study of fleshed human remains and identification of the living [10-15]. Thus, to some extent, the modern forensic anthropologist deals with soft tissue structures. For instance, a significant number of the regression equations for prediction of biological identity are derived from the living subjects in weight bearing position. Some of these equations were derived from foot dimensions with the hope that they can be useful when an isolated foot is discovered particularly as the foot dimensions have been proven to be reliable [16-19]. Surely, because of the specific legal implications attached, high accuracy and precision are required in predicting the biological profile [11,20]. However, there are very important sources of errors that anthropologists have not given much attention to regarding the prediction of biological profile from foot dimensions. Body weight and abnormal arch height can have profound effects on the accuracy of the regression equations derived from foot dimensions. This article, therefore, briefly discusses the forensic implication of the foot and the effect of body weight and arch height on the accuracy of the regression equations derived from weight bearing subject as well as subjects with arch deformities.

An Overview of Foot Anatomy

The foot is a complex anatomical and biomechanical structure made up of 26 bones (excluding the sesamoids), 33 articulations, 112 ligaments, and controlled by 13 extrinsic and 21 intrinsic muscles [21,22]. The bones comprise of 7 tarsal bones (talus, calcaneus, navicular, three cuneiforms, and cuboid), 5 metatarsals and 14 phalanges. In the frontal plane, these bones have been divided into three anatomical and functional zones: the hindfoot (talus and calcaneus), separated from the midfoot (navicular, cuboid and cuneiforms) by the transverse tarsal joint, and forefoot (metatarsals and phalanges), separated from the midfoot by tarsometatarsal joint [23]. The sagittal plane division divides the foot into a more flexible medial column (consisting of the talus, navicular, three cuneiforms, and first three metatarsals) and lateral column (consisting of the calcaneus, cuboid, and lateral two metatarsals) [24].

The architecture of the foot is such that its bones do not lie in the same horizontal plane. Rather, their shapes and configuration form a dome relative to the ground, forming the longitudinal and transverse arches of the foot [25]. The bones are united and supported by the ligaments, which are of varying length, width, and elasticity, permitting small to a large degree of movements of the joints around the arches. The ligaments, in combination with the muscles and tendons, confer a considerable flexibility to the foot, allowing the arches to deform and reverse to normal alignment with respect to the load applied. Through this configuration, the foot is able to absorb body weight as well as counter gravity and shocks injurious to the skeletal structures of the body [26]. On the other hand, the general shape and size of the foot, as well as the impression made by the foot, depends upon the structure of the different bones comprising the foot. The way the bones are held by the connective tissues also differs, not only from individual to individual but also from left to right feet of the same individual [2,26-28]. The foot is also affected by racial and regional variations, age, gender, lifestyle, nutritional status, shoe type as well as congenital and climatic factors [29,30].

Being the most distal part of the body, the foot serves as the primary interface between the ground and body [32], and the site at which external forces are applied to the body [33]. Consequent to the forces acting on the foot from body weight and gravity, the size, and shape of the foot is altered during weight-bearing compared to that of the nonweight- bearing foot (Figure 1) [4]. In fact, Krishan [34] noted that both length and breadth of footprint tend to increase significantly with an increase in 20 kg weight. 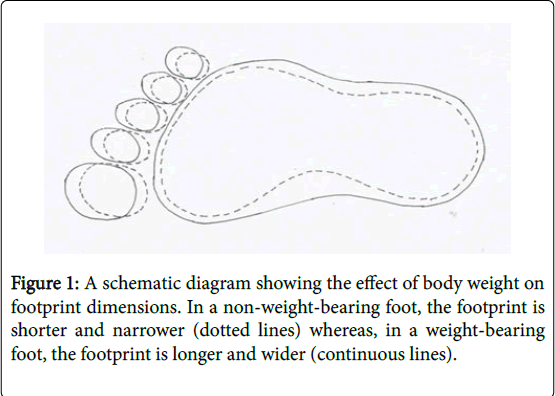 Additionally, Uhrova, Benus [35] observed that the body weight of standing individual compresses the foot and press it against the floor, whereas in lying position, no force is acting upon the foot so the foot dimensions will be smaller than the actual dimensions in the standing position. Thus, a forensic scientist using regression equation derived from standing living subjects must take into account the weight bearing changes that occur in the foot [35].

The concept of the foot as a twisted plate presented by Sarrafian [36] explains the principles of lengthening and shortening of the foot respectively in weight-bearing and non-weight-bearing postures as well as in low-arched and high-arched foot. Twisting the foot plate further, as in high-arched foot, increases the height of the medial longitudinal arch, shortens the foot length, and relaxes the plantar fascia (Figure 2). Untwisting the foot plate, which mimics a low-arched foot, lowers the medial longitudinal arch, lengthens the foot, and tenses the plantar fascia (Figure 3). Indeed, it has been observed that the skeleton of the foot rests on, and is controlled by, a multisegmental ligamentous and fascial tie-bar system formed respectively by the deep transverse metatarsal ligament and the plantar fascia [37]. The fascia is attached posteriorly to the inferior aspect of the calcaneal tuberosity and extends anteriorly to the base of the proximal phalanx of each toe, acting as tie-bar to control the longitudinal arch of the normal weightbearing foot. 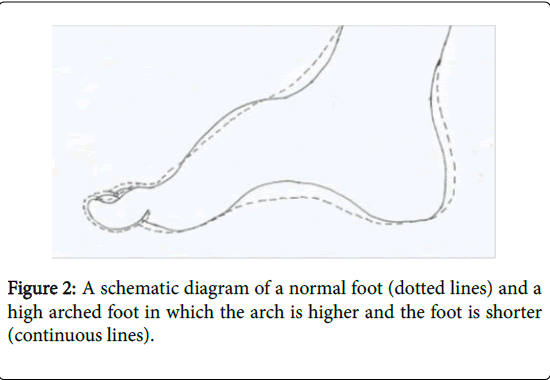 Figure 2: A schematic diagram of a normal foot (dotted lines) and a high arched foot in which the arch is higher and the foot is shorter (continuous lines). 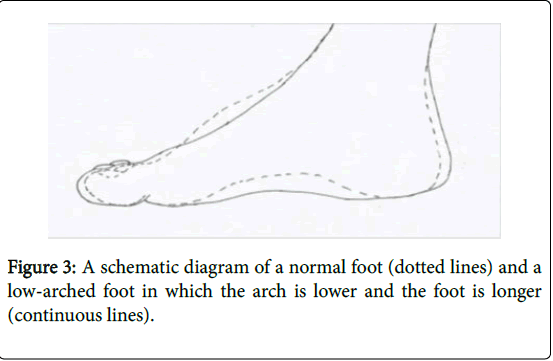 Figure 3: A schematic diagram of a normal foot (dotted lines) and a low-arched foot in which the arch is lower and the foot is longer (continuous lines). 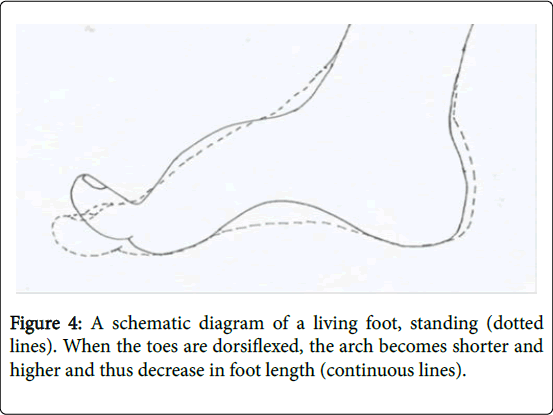 Figure 4: A schematic diagram of a living foot, standing (dotted lines). When the toes are dorsiflexed, the arch becomes shorter and higher and thus decrease in foot length (continuous lines).

The measurement of actual foot length can also be skewed by foot deformities such as claw toes and hallux valgus. Claw toes are sometimes found in individuals with high-arched foot, whereas hallux valgus is often found in individuals with a low-arched foot [45]. Hallux valgus results in failure of the hallux windlass mechanism. Subsequently, control and support of the medial longitudinal arch are reduced or lost and thus decrease in arch height. Consequently, the foot may be longer than normal. In claw toes, on the other hand, the metatarsophalangeal joints are further dorsiflexed, the metatarsal heads further depressed, and the plantar fascia further tightened. Thus, the arch becomes higher and the distance between the metatarsal heads and the calcaneus further shortens, and thus, reduction in the foot length [37].

Nevertheless, some studies have shown that no meaningful relationship exists between arch height and foot length [46-48]. Additionally, one study that categorized foot posture into normal, lowarched and high-arched feet using arch index derived from inked footprint reported no significant differences in foot length, stature, body weight and body mass index between the three categories [49]. However, these studies were primarily based on the applicability of foot dimensions in footwear design. Forensically, however, the influence of the different arch height on the accuracy of regression equations derived from individuals with the three different foot postures has not been reported according to our search. A study by Zeybek et al. determined regression equation for estimation of stature and gender from four foot dimensions, including navicular height. The navicular height, in particular, showed a good relationship with the stature. Interestingly, the height of the navicular bone is known to be proportional to arch height and this makes it a suitable reference point in examinations of arch deformities [50]. Indeed, Xiong [49] also observed that the low-arched group have significantly smaller navicular height and longer arch length compared to the normal and high-arched groups.

It is an established fact that both foot length and the navicular height tend to increase with an increase in age [51]. Indeed, the growth of the foot is in synchrony with the body as a whole since the human stature is an anatomical complex of linear dimensions [52]. Thus, the relationship between the navicular height and the stature reported by Zeybek and Ergur [29] may be considered as part of the normal growth process where the various body parts increase proportionately [35]. From the statistical viewpoint, however, it may be understood that because of the positive correlation existing between the stature and navicular height, an increase in navicular height results in an increase in arch height and stature as well. Thus, when deriving a regression equation from individuals with low-arched feet, the stature may be erroneously estimated, as the arch height has abnormally decreased, the foot length abnormally increased while the stature remains normal. Similarly, errors may result when regression equation derived from individuals with high-arched feet is used to estimate stature, since the arch height has abnormally increased, and the foot length decreased while the stature remains normal.