Prediction of Preeclampsia with Novel Biomarkers at Second Trimester of Pregnancy

Copyright: © 2016 Omran AAS, et al. This is an open-access article distributed under the terms of the Creative Commons Attribution License, which permits unrestricted use, distribution, and reproduction in any medium, provided the original author and source are credited.

Objective: To evaluate the ability of the soluble vascular endothelial growth factor receptor (sFlt-1), neutrophilflt- 1, monocyte-flt-1, pentraxin 3 (PTX3), nitric oxide (NO) and alpha fetoprotein (AFP) measurements at gestational weeks 14-18 to predict preeclampsia (PE).
Subjects & Methods: Fifty pregnant females at second trimester of pregnancy divided into 25 normotensive pregnant females who remained normotensive till delivery (group I) and 25 high risk pregnant females who subsequently developed PE (group II). Twenty five healthy non-pregnant females served as control (group III). Maternal blood samples were collected at 14-18 gestational weeks. EDTA samples were investigated for both neutrophil- and monocyte-flt-1 by flow cytometer. Plasma samples were used to estimate PTX3, along with stored serum samples which were analyzed for sFlt-1, NO and AFP all by ELISA.
Results: Alpha fetoprotein, sFlt-1 and pentraxin 3 were found to be statistically significantly increased in group II when compared with group I (P-value=0.024, <0.001 and 0.006) and group III (P-value ≤ 0.001). However, there was statistically significant decrease in neutrophil-flt-1 and nitric oxide in group II when compared with group I (P-value ≤ 0.001 and 0.016). Group II had significant negative correlation between soluble flt-1 and both neutrophil- and monocyte-flt-1 (P-value ≤ 0.001 and 0.009) and between neutrophil-flt-1 and PTX3 (P-value=0.007). Soluble flt-1 was found to have the highest predictive value for predicting preeclampsia (AUC=0.941 and P-value ≤ 0.001)
Conclusion: soluble Flt-1 was found to be the best single biomarker in predicting preeclampsia at first half of the second trimester with the best diagnostic sensitivity and specificity. Soluble flt-1 was significantly negatively correlated with neutrophil-flt-1 and monocyte-flt-1. So, the predictive utility of sFlt-1 could be strengthened when combined with both neutrophil- and monocyte-flt-1. This may be an approach to develop a novel predictive model for preeclampsia combining the three biomarkers with better sensitivity and specificity.

Preeclampsia (PE) is a major contributor to the maternal and neonatal mortality and morbidity. It is the 2nd largest cause of maternal mortality affecting 3% to 8% of pregnant women worldwide [1]. Preeclampsia is a multisystemic disorder of unknown etiology manifested with hypertension, proteinuria with or without other multisystemic alterations [2].

Therefore we are in need of a widely applicable and affordable test that could permit pre-symptomatic diagnosis in order to identify and monitor the patients at risk for developing preeclampsia and thus provide the best prenatal care for these women and their child [3].

Preeclampsia has been associated with an elevation of alpha fetoprotein (AFP) in maternal serum. Elevated maternal AFP is associated with a higher frequency of adverse pregnancy outcomes such as PE at later gestations [4].

Previous studies have shown that placenta of preeclamptic women secretes multiple proteins in response to impaired placental perfusion and hypoxia. One of the secreted placental factors is vascular endothelial growth factor (VEGF) which is a multifunctional cytokine that plays a pivotal role in angiogenesis in vivo. It exerts its biological effects through VEGF receptor-1 [Fms-like tyrosine kinase 1 (Flt-1)] and VEGF receptor-2. Flt-1 has recently gained attention because of its overall implication in pathological angiogenesis and inflammation. Placental cells also secrete a soluble isoform of Flt-1(sFlt-1) that acts as an anti-angiogenic factor by interacting with, and thereby neutralizing, VEGF. Also, the increased level of sFlt-1 during PE inhibits the upregulation and decreases neutrophil expression of Flt-1 by neutralizing VEGF [5].

Pentraxin 3 has been proposed as a marker of endothelial dysfunction and inflammation in PE due to continuous shedding of placental debris into maternal circulation. Pentraxin 3 is elevated in normal pregnancy and also shown to be higher with PE. Additional longitudinal studies throughout pregnancy may be warranted to determine if PTX3 will be a useful early marker for PE [6].

Because NO is an important physiological vasodilator in normal pregnancy, it follows that NO deficiency during PE has been implicated in the disease process. It is unclear whether NO deficiency occurs in women with PE [7].

So the aim of this study was to assess the clinical utility of AFP, sFlt-1, neutrophil-flt-1, monocyte-flt-1, PTX3 and NO as predictive biomarkers of preeclampsia in first half of the second trimester pregnant women before the appearance of clinical symptoms of the disease.

Fifty pregnant women who attended the Minia University Hospital for routine antenatal care, over a period of one year, between 14-18 weeks of gestation divided into 25 normotensive pregnant females who remained normotensive till delivery (group I) and 25 high risk pregnant females who subsequently developed PE (group II). Twenty five age matched apparently healthy females were served as control. All subjects were included in the study after obtaining an informed consent. The exclusion criteria included: Women with history of chronic hypertension, diabetes, renal disease, proteinuria by dipstick method as well as those with a baseline blood pressure of ≥ 140/90 mmHg at booking. All women included in the study were followed up till delivery.

A spot urine sample was collected for estimation of calcium, creatinine and albumin. Six ml of venous blood were withdrawn by sterile venipuncture, divided to: Two ml added to EDTA containing tube to estimate: complete blood count (CBC) and flow cytometric analysis for the dual cell surface expression of CD13/Flt-1 and CD14/ Flt-1. Plasma was separated, aliquoted and kept frozen at -40°C until analysis of pentraxin 3. The rest of blood sample was evacuated into plain tube and serum was used for instant analysis of random glucose, urea, serum creatinine, uric acid (UA), total bilirubin, ALT, AST and albumin. Stored serum was kept frozen at -40°C until analysis of AFP, sFlt-1 and nitric oxide.

Maternal neutrophils and monocytes were identified using monoclonal mouse anti human antibodies against neutrophil surface markers CD13 conjugated with fluorescent isothiocyanate (FITC) (Clone WM-47, Dako, Denmark) and against monocyte surface markers CD14 conjugated with FITC for CD14 (Clone TUK4, Dako, Denmark). For each sample we used three tubes labeled as one tube for the negative control where the isotype-negative control was added, and two tubes as test 1 and 2. To all tubes, 100 μl whole blood were added and incubated for 30 minutes in the dark with 10 μl of FITCconjugated antibodies against neutrophils CD13 (test tube 1), and with 10 μl against monocytes CD14 (test tube 2), along with 10 μl of the phycoerythrin (PE)-labeled monoclonal antibody which bound to cells expressing flt-1 added to both test tubes (R&D systems). After incubation, diluted lysing reagent was added and centrifuged. The supernatant was removed and pellets were left at the bottom of tubes, then PBS was added to tubes for flow cytometric analysis. The dual cell surface expression of CD13/flt-1 and CD14/flt-1 was determined by flow cytometric analysis using 488 nm wavelength laser excitation (BD FAC SCalibur, BD Biosciences, USA).

Data were analyzed by using SPSS (Statistical Package for Social Science) version 16. Results were expressed as mean ± standard deviation (SD) unless otherwise specified. Student t-test of Mann Whitney was used to compare variables between studied groups. Pearson correlation was used to perform correlation between different variables. Results were considered significant if P-value was <0.05 and highly significant if P-value <0.001. Receiver Operating Characteristic (ROC) curve was used to estimate area under the curve (AUC) of different variables where 0.9-1.0 indicating an excellent test, 0.8-0.9 a good test, 0.7-0.8 a fair test and 0.6-0.7 a poor test. ROC curve was used to estimate the optimal cut-off value for best sensitivity and specificity of coordinate points of the curve. The optimal cut-off value was used to estimate both positive predictive value (PPV) and negative predictive value (NPV) of the studied variable. 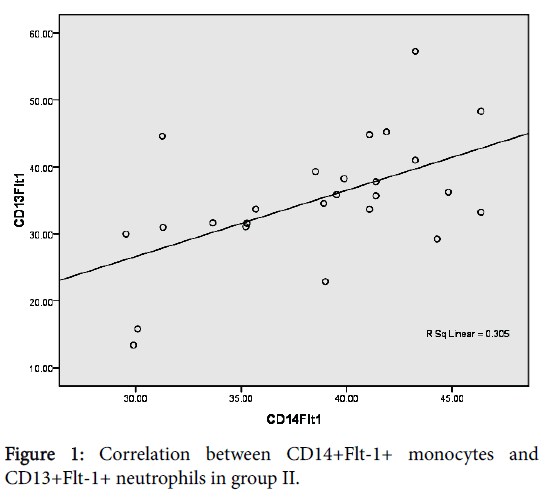 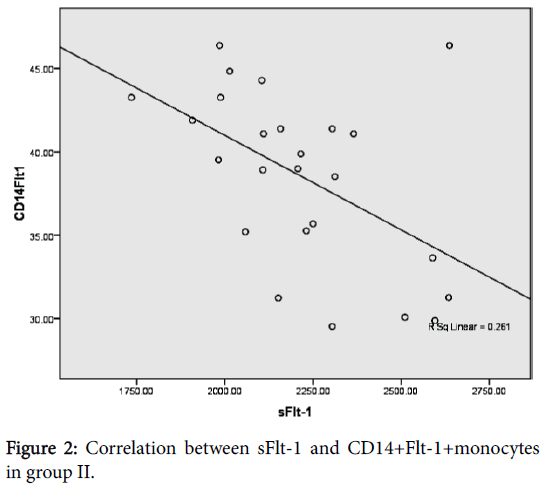 Figure 2: Correlation between sFlt-1 and CD14+Flt-1+monocytes in group II. 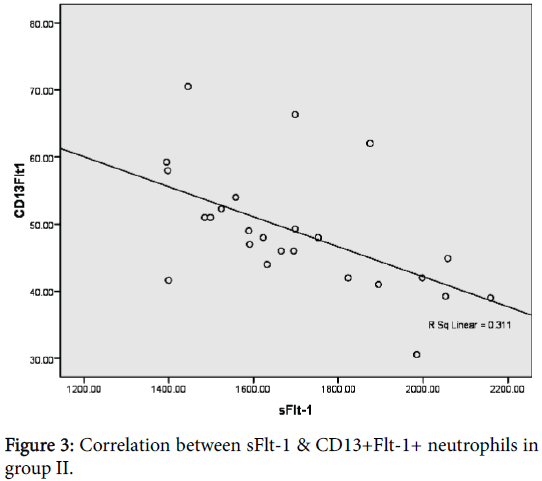 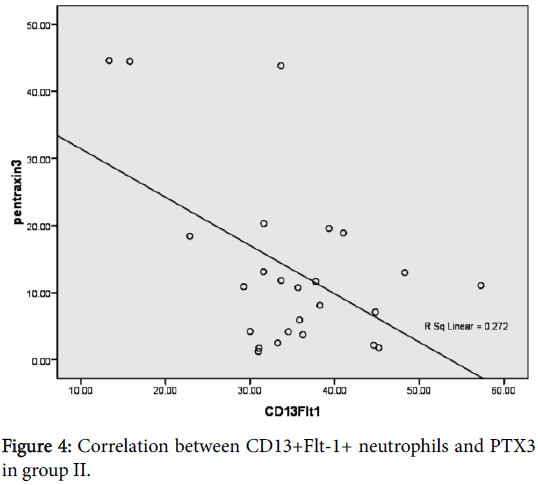 Figure 4: Correlation between CD13+Flt-1+ neutrophils and PTX3 in group II. Figure 5: Correlation between PTX3 & NO in group III. 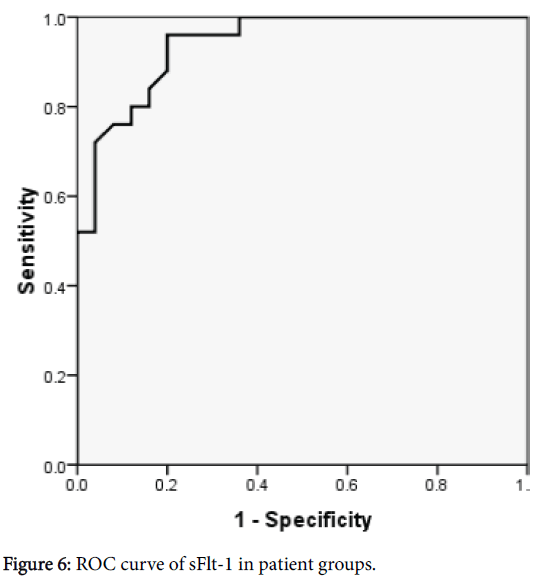 Group II had significantly the highest BMI, ACR, AFP, sFlt-1 and PTX3 mean values. However, CCR, CD13+flt-1+ neutrophils, CD14+flt-1+ monocytes and NO had the lowest mean values in group II when compared with other studied groups.

Preeclampsia is a syndrome which develops towards the end of pregnancy. Its pathogenesis is still not clearly defined hence there is no specific diagnostic tests for its prediction.

In this prospective study, we investigated traditional (BMI, UA, ACR and CCR) as well as novel (AFP, sFlt-1, neutrophil-flt-1, monocyte-flt-1, PTX3 and NO) biomarkers for prediction of preeclampsia at second trimester of pregnancy. These biomarkers were estimated at 14-18 weeks of gestation in 50 pregnant antenatal women of whom, 25 low risk females remained normotensive until delivery and 25 high risk pregnant females developed preeclampsia later in gestation compared to 25 healthy non-pregnant controls.

This study revealed that among traditional biomarkers in predicting preeclampsia, BMI was a good test followed by ACR (fair test), CCR (fair test) and at last uric acid (poor test). BMI had the highest mean value in preeclamptic patients compared with other groups. Using BMI in predicting preeclampsia was investigated in other studies. However BMI was found to be only a fair test by North et al. [10], Myatt et al. [11] and a poor test by Direkvand-Moghadam et al. [12]. In contrary, Anderson et al. [13] did not find significant association between BMI and preeclampsia.

Using ROC analysis among studied novel biomarkers for prediction of preeclampsia, we found that sFlt-1 was the best (excellent test) followed by neutrophil-flt-1 (good test), PTX3 (fair test), monocyteflt- 1 (fair test), NO (fair test) and at last AFP (poor test). Soluble flt-1 had the highest mean value in preeclamptic patients compared with other groups. These results were in agreement with Shokry et al. [14] and Myers et al. [15]. In the present study, a significant negative correlation was found between sFlt-1 and both neutrophil-flt-1 and monocyte-flt-1 in preeclamptic patients. This was also agreed with Shokry et al. [14]. This was probably due to excessive formation of the auto splicing variant of flt-1 receptor (sFlt-1) decreasing the formation of flt-1 receptor on neutrophils and monocytes. This explanation agreed with Rajakumar et al. [16] and Miyagami et al. [17] who concluded a decrease in placental gene expression of flt-1 receptor in preeclampsia.

The present study revealed that Pentraxin 3 had the highest mean value in preeclamptic patients compared with other groups. This was in agreement with Castiglioni et al. [18] and Akolekar et al. [19,20]. In the context of systemic inflammatory process and its contribution to the pathogenesis of preeclampsia, Cetin et al. [21] studied both C-reactive protein and PTX3, found that only PTX3 levels were elevated in women who subsequently developed preeclampsia.

In the present study, NO had the lowest mean value in preeclamptic group when compared with other groups as found by Matsubara et al. [7] and Shaker et al. [22]. The decrease in NO may be due to consumption by the increased oxidative stress state which in turn leads to development of preeclampsia or due to reduced NO production which may have an adverse effect on placental hemodynamic function in preeclampsia, and could be involved in the pathogenesis of this important obstetric complication.

Among all studied biomarkers, soluble flt-1 was found to be the best single biomarker in predicting preeclampsia at 14-18 weeks of gestation with the best diagnostic sensitivity and specificity. Soluble flt-1 was significantly negatively correlated with neutrophil-flt-1 and monocyte-flt-1. So, the predictive utility of sFlt-1 could be strengthened when combined with both neutrophil- and monocyteflt- 1. This may be an approach to develop a novel predictive model for preeclampsia combining the three biomarkers with better sensitivity and specificity.