Tuberculosis (TB) is one of the most ancient diseases of mankind and has co-evolved with humans for many thousands of years or perhaps for several million years. M. tuberculosis strains that are resistant to the two most potent anti-TB drugs Isoniazid and Rifampicin, are termed as multidrug-resistant TB (MDR-TB) strains. Drug resistance is broadly classified as primary and acquired. Drug resistance in a patient who has never received anti-TB treatment previously or has taken treatment for less than a month is termed as primary resistance. Acquired resistance is the resistance which arises as a result of specific previous treatment. This study was aimed to determine the prevalence of primary MDR-TB in and around Aligarh region by molecular diagnostic method of Line probe assay (LPA). This two year study was carried out in culture and DST Laboratory (RNTCP certified), Department of Microbiology, J.N. Medical College AMU, Aligarh on the sputum samples received of the primary pulmonary tuberculosis suspected patients (according to PMDT guidelines) from the outpatient and inpatient departments of the hospital and from various tuberculosis units in and around Aligarh region from October 2015 to October 2017. Sputum samples were collected from suspected cases of primary pulmonary TB. These samples were subjected to routine microscopy and culture on LJ medium to detect Mycobacterium tuberculosis. Positive cases were subjected to drug sensitivity test by GenoType MTBDRplus Assay. Out of the total 514 samples collected, 265 (51.56%) samples and 326 (63.43%) samples were positive by ZN microscopy and fluorescent microscopy respectively. 312 (60.70%) samples were positive on culture on LJ medium. Total 326 samples which were positive on fluorescent microscopy were subjected to LPA and 47 (9.14%) samples were resistant to both rifampicin and isoniazid, 21 (4.08%) samples were rifampicin mono-resistant and 31 (6.03%) samples were isoniazid mono-resistant.

Tuberculosis is an infectious bacterial disease caused by Mycobacterium tuberculosis which most commonly affects the lungs. It is transmitted from person to person via droplets from the throat and lungs of people with active pulmonary disease [1]. TB is a serious global public health threat. TB is the ninth leading cause of death worldwide and the leading cause from a single infectious agent, ranking above HIV/AIDS [2]. In 2016, there were an estimated 1.3 million TB deaths among HIV negative and an additional 374 000 deaths among HIVpositive people [2]. Globally in 2016, an estimated 4.1% of new cases and 19% of previously treated cases had Multidrug resistant TB [2]. Rapid identification is important for effective treatment and control of MDR-TB. Conventional methods of drug susceptibility testing (DST) include solid media-based methods such as the proportion, absolute concentration, and resistance ratio methods. These can take up to 12 weeks to produce definitive results, leading to prolonged infectiousness [3]. Liquid media-based tests are more rapid, but also costlier and require sophisticated laboratories and trained personnel [3]. Molecular LPA permit rapid diagnosis of TB, isoniazid and rifampin resistance, and clinically relevant non-M. tuberculosis mycobacteria. In LPA assays, DNA or RNA is isolated from culture or direct (i.e., sputum) respiratory samples and then amplified and reverse hybridized onto a nitrocellulose strip with immobilized probes for different mycobacteria or for mutations that confer resistance. These strips can be quickly interpreted using a template, with the entire testing process taking a day or even less. The GenoType MTBDRplus (Hain Lifesciences, Nehren, Germany) identifies rifampin and isoniazid resistance by detecting the most common mutations of the rpoB gene and the katG and inhA genes, respectively.

Sputum samples from 514 (n=514) suspected new pulmonary TB patients were collected and subjected to ZN microscopy and fluorescent microscopy and cultured on LJ media. Sputum positive samples were tested by LPA for the presence of M. tuberculosis complex and resistance to isoniazid and rifampicin.

The GenoType MTBDRplus LPA was performed according to the manufacturer’s (Hain Life-science, Nehren, Germany) instructions. Three steps for LPA test include DNA extraction, multiplex polymerase chain reaction (PCR) amplification and reverse hybridization. These steps were carried out in three separate rooms with restricted access and unidirectional workflow. LPA strips were observed and read for the presence of TUB band, amplification control band and conjugation control band and absence of any wild type (WT) band or presence of any mutation (MUT) band. The results were then interpreted as sensitive or resistant to any particular drug. 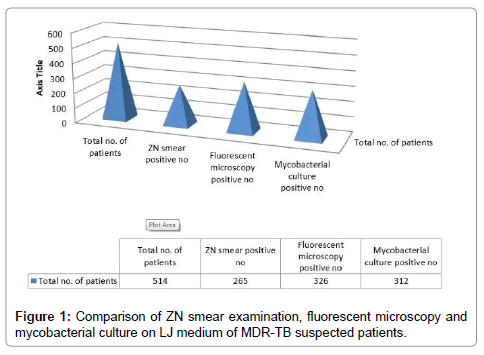 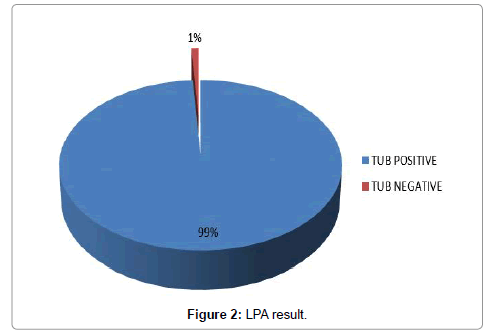 Table 2: TUB band of the samples. 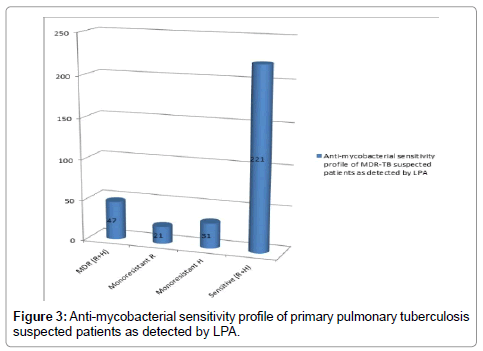 The present study showed that out of total 514 samples, 326 (63.43%) samples were positive for fluorescent microscopy and 188 (36.57%) were negative. The study clearly indicated that the case detection rate of fluorescent microscopy is remarkably higher than that of ZN microscopy. The other advantages of less eye strain, easy visualization, less time consumption and even detection of low number of bacteria in comparison to ZN method cannot be overlooked also.

In this study the prevalence of primary pulmonary multidrug resistant tuberculosis was found to be 9.14% and isoniazid monoresistance was found to be 6.03% and rifampicin monoresistance was reported as 4.08%. Keeping in mind the socio-economic status of the patients seeking medical service in the institute, this much high prevalence of drug resistant TB can be justified however, factor that lead to clustering of data like we were primarily concerned with the TB patients in the institute itself cannot be overlooked.

Copyright: © 2018 Faridi M, et al. This is an open-access article distributed under the terms of the Creative Commons Attribution License, which permits unrestricted use, distribution, and reproduction in any medium, provided the original author and source are credited.