Copyright: © 2016 Taddei A, et al. This is an open-access article distributed under the terms of the Creative Commons Attribution License, which permits unrestricted use, distribution, and reproduction in any medium, provided the original author and source are credited.

Objective: Neurofibromatosis type 1 (NF1) is an autosomal dominant inherited disease. Although only a minority
of NF1 patients develops malignancy as a complication of the disorder, cancer (mainly represented by tumors
involving the nervous system) remains an important cause of morbidity and mortality. A case of the rare association
between adenocarcinoma of the Vater ampulla and NF-1 is here reported. The patient accepted Whipple operation.
Histologic analysis of the whole surgical specimen revealed an adenocarcinoma limited to the ampulla of Vater,
without lymphonodal involvement.
Methods: A study of the possible presence of genetic alterations, which could demonstrate a molecular correlation
between NF-1 and periampullary epithelial neoplasms, was performed using the intragenic NF1 microsatellites.
Results: Adenocarcinoma sample retained heterozygosity for the informative microsatellites; furthermore,
microsatellite analysis was unable to detect any LOH involving the NF1 gene.
Conclusion: Our results suggest that Ampulla’s adenocarcinomas are an occasional event in NF1, accordingly
to the epithelial but not neuroectodermical origin of this tumour.

Neurofibromatosis type 1 (NF1), formerly known as the peripheral form of neurofibromatosis, is an autosomal dominant inherited disease with a high rate of penetrance, that affects 1 in every 3500 live births. Caused by mutation in the NF1 gene, NF1 is characterized by multiple cafè-au-lait spots, peripheral neurofibromas, axillary and/or inguinal freckling, and Lisch nodules. The NF1 gene, located on 17q11.2, is a tumor suppressor gene; both copies of the gene are inactivated in benign and malignant NF1-associated tumors [1]. Loss of Heterozygosity (LOH) in the NF1 region is associated with peripheral and plexiform neurofibromas development, and can also be found in NF1-associated malignant peripheral nerve sheath tumors [2].

Although only a minority of NF1 patients develops malignancy as a complication of the disorder, cancer remains an important cause of morbidity and mortality. Malignancies develop in 3-15% of NF1 patients and are mainly represented by tumors involving the nervous system. However, neoplasms can arise in several organs, including the gastrointestinal tract, larynx, blood vessels and heart. The gastrointestinal involvement in NF1 may include: a) hyperplastic lesions of gut neural tissue, b) gastrointestinal stromal tumors, c) endocrine cell tumors of the duodenum and periampullary region d) a miscellaneous group of other tumors [3]. A case of the rare association between adenocarcinoma of the Vater ampulla and NF-1 is here reported and the study of the possible presence of genetic alterations, which could demonstrate a molecular correlation between NF-1 and periampullary epithelial neoplasms is also illustrated. Figure1: Panel A: Subcutaneous neurofibroma and multiple cafè-au-lait spots on the thorax of the present case; Panel B: A 15 mm solid mass of the ampulla of Vater, protruding into the duodenum detected by TC examination; Panel C: Operating specimen after Whipple operation; Panel D: The neopalsia was histologically formed by tubular glands with some areas with a cribriform pattern (intestinal-type adenocarcinoma).

A tumour specimen was frozen immediately after surgical removal. Genomic DNA was extracted from whole blood and frozen tumour tissue by standard methods. Loss of heterozygosity (LOH) analysis was performed using the intragenic NF1 microsatellites IVS27bAC28.4, IVS27bEVI-20, IVS38TG53.0 and IVS27bGXAlu [4,5]. Briefly, primers specific for each locus were used to amplify the repeat sequences in template DNA by PCR. The forward primers were labeled by 6-FAM or HEX and PCR products were analyzed by a model 310 automated sequencer (Applied Bio systems).

Results and Review of the Literature

Neurofibromatosis consists of two clinically and genetically distinct diseases: neurofibromatosis 1 (NF1) and neurofibromatosis 2 (NF2). NF1 is associated with deletions, insertions or mutations of the NF1 gene, a tumor suppressor gene located in the pericentromeric region of chromosome 17q11.2. Since only half of the patients affected with this disease have other affected family members, the disease in the remaining patients is determined by new mutations, with the highest estimated mutation rate for a dominant inherited trait. Although NF1 is considered to be completely penetrant, no recurring mutations have been identified, and the diagnosis is based on clinical criteria [6]. Gastrointestinal involvement has been documented in approximately 25% of NF1 patients. Most gastrointestinal tumors are represented by neurofibromas, ganglioneuromas, paragangliomas and neurilemomas, but their real incidence is uncertain because the diagnosis is suspected only in symptomatic patients. Gastrointestinal stromal tumors (GIST) are the digestive tumors most frequently associated with NF1, tend to be multiple and are generally considered as noncoincidental because of their neuroectodermical origin. Carcinoid tumors have also been described in NF1, and the association is specific, almost certainly because of their neuroendocrine origin. An unusual feature of the NF1- associated carcinoids is their predilection for duodenum and ampulla of Vater, an uncommon site in the general population.

The association of NF1 and periampullary neoplasms is a well-known finding and carcinoids are mostly represented in this association. Adenocarcinoma of the ampulla of Vater is a relatively uncommon neoplasm, which accounts for approximately 6% of the periampullary tumors. It has an incidence of approximately 5.7 cases per million population per year and a more favorable prognosis after curative surgery than adenocarcinomas with pancreatic or bile duct involvement. The most extensive review of tumors of the periampullary region in patients with NF1, up to now available in the english literature, performed in 1989, collected 37 cases of periampullary neoplasms but included only 3 epithelial tumors, one of the pancreas, one of the duodenum and one of ampulla of Vater [7]. Costi and coll, were able to perform the most extensive review of epithelial tumors of the periampullary region in NF1 patients, collecting 12 cases.

After a detailed analysis of the literature we were able to collected 16 cases in 15 NF1 patients affected with ampullary or peri-ampullary carcinomas or adenocarcinomas (Table 1), including the present case. These tumors were cited in the ampulla of Vater in 7 cases [8-12] including the present case, in the duodenum in 5 cases [7,13-15], in the head of the pancreas in 3 cases [16-18] and in the bile duct in 1 case [18]. From this analysis it is clear that the rare association between NF-1 and adenocarcinomas of the periampullary region is equally distributed between sexes, seven males, six women and two patients of unknown sex. This distribution is according with the general distribution of NF-1. The age distribution differs from the general distribution of this type of neoplasia in the general population. The average of onset of periampullary adenocarcinomas in NF-1 patients is lower than general population: four patients are younger than 40 years old, only four patients are older than 50, and just two of that older than 60; the average is 48.6 with a median range from 27-73. This datum differs from the literature about sporadic periampullary adenocarcinomas, not associated with NF1, which usually occurs after 60 years old. The most frequent first symptom is jaundice, present in 8 cases, as in sporadic neoplasms.

From a therapeutic point of view, radical surgery is possible in a high number of cases, as reported in the literature; in 7 cases a pancreatoduodenectomy was performed. Unfortunately follow-up reported in the literature examined is inadequate to understand the prognosis of this kind of neoplasia in patients with NF-1. However, four patients has a long free-disease survival, one 22 years, one 10, one 7 (present case) and one 3 years. Moreover, even if a local excision of the tumor has been performed, the high risk of recurrence in the periampullary region and neoplastic degeneration of the closer mucosa seem to indicate that radical surgery (pancreatoduodenectomy) would be the best surgical choice. The most interesting aspect is the association between NF-1 and adenocarcinomas of the Vater ampulla. In 1987 Jones proposed a correlation between epithelial tumors of the small bowel and NF-1 and three years later Kingston described a relation between NF-1 and epithelial neoplasia of the periampullary region, exclusive of carcinoids. However, there are no definite and clearly recognized associations between NF-1 and epithelial neoplasms of the gastrointestinal tract, but there are only individual case report of a number of uncommon primary tumors. For this reason the significance of this observation in still difficult to assess, even if many authors seem to identify a correlation between NF1 and epithelial gastrointestinal tumors, and in particular with periampullary tumors. Analyzing the pathway of cancerogenesis in NF-1 patients, several study demonstrated by genetic and biochemical evidence, that NF1 could be considered as a tumor suppressor gene. In keeping with Knudson’s “two-hit” hypothesis, both copies of the NF1 gene are inactivated in benign and malignant tumors from NF1 patients. Loss of the wild-type copy of the NF1 gene leading to loss of heterozygosity (LOH), as well as inactivating somatic point mutations within the gene, have been demonstrated in a number of neurofibromas and malignant peripheral nerve sheath tumors. 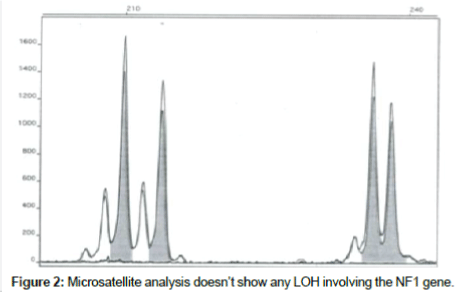 In conclusion, although we cannot exclude a somatic NF1 point mutation inactivating the normal NF1 allele, our results suggest that Ampulla’s adenocarcinomas are an occasional event in NF1, accordingly to the epithelial but not neuroectodermical origin of this tumor [19]. However, it is important to consider that this type of tumors occurs more frequently and at a younger age in NF-1 patients, than in general population. Moreover, radical surgery is often possible and pancreatoduodenectomy (Whipple’s operation) is the surgery of choice, with the longest survival. Therefore, a correct evaluation of patients with NF1 who have abdominal symptoms should be more aggressive than in general population, especially in young patients, because this is the only hope to achieve a favourable result [20-22].