Primitive Tumor of the Chest Wall: About 16 Cases and Review of the Literature

Copyright: © 2016 Ammor FZ, et al. This is an open-access article distributed under the terms of the Creative Commons Attribution License, which permits unrestricted use, distribution, and reproduction in any medium, provided the original author and source are credited.

Chest wall tumors are a heterogeneous group of lesions, they represent less than 5% of thoracic cancers [1] in 3 forms, which are in order of decreasing frequency: chest metastases, tumors of soft tissue invading the chest by contiguity , and finally, primary tumors of the chest wall (muscle or bone origin) [2]. Wound surgical resection remains an effective way to prevent or treat complications, and improve the quality of life for these patients, sometimes requiring a surgical reconstruction of the defects caused by resection. This work is intended to assess the results of surgical treatment of these tumors through the experience of our service, and set some predictors of morbi-mortality.

This is a retrospective study conducted over a period of 7 years; from February 2009 to December 2015, compiling 16 cases of tumors primitive of the chest wall in the Department of thoracic surgery of CHU Hassan II of Fez, they have received an oncological resection, arriving sometimes at a total parietectomie, with parietal reconstruction, by analyzing postoperative fate and the risk factors of occurrence of postoperative complications immediate or long term.

It was 11 men and 5 women, the average age was 42 with extremes from 17 to 77, among the pathological history: a patient treated for pulmonary tuberculosis, a notion of chronic smoking, and three patients had been operated for Dermatofibrosarcoma of Darrier and Ferrand (which two were dual operated at 3 year intervals), and one was operated for a tumor type PNET.

The mean diagnostic delay was 21, 52 mois, with extremes ranging from 2 weeks to 11 years, the clinical presentation was in 93% of cases by a pain associated to a thoracic mass that were in 36% of cases in lateral side (which 18% left, 18% right) and 36% was anterior and 28% posterior; in four recurrences, the tumor arise next to the old scar of the surgical incision (Figure 1). 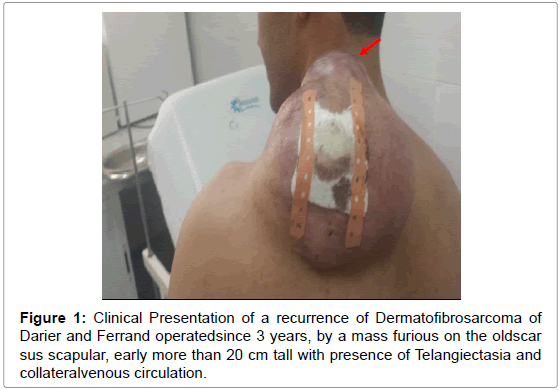 Figure 1: Clinical Presentation of a recurrence of Dermatofibrosarcoma of Darier and Ferrand operatedsince 3 years, by a mass furious on the oldscar sus scapular, early more than 20 cm tall with presence of Telangiectasia and collateralvenous circulation.

The average tumor size was 7.8 cm with extremes ranging from 2 to 20 cm. In 25% of cases the tumor was necrotic and infected, all patients benefited from thoracic CT scan which were able to detect a parietal tissue mass. The assessment of tumor extension (TDM CTAP or MRI) could detect in 20% an exo-endo-thoracic extension, hitting diaphragm and spinal; and it was negative in 80% of cases (Figure 2). Figure 2: Thoracic CT transversal and sagittal Cupobjectifying a chest tissue massnext to the EIC 10th making 89/48 mm with costal lysis of the 9, 10thribs, and tissue invasion.

The histological diagnosis was established in 6 patients by biopsy, and the 10 other by anatomo-pathological examination of the tumor mass. In our series, it was 10 cases of dermatofibrosarcoma of Darrier and Ferrand grade I; 2 cases of bone tumor (chondrosarcomas, PNET); 2 cases of sarcoma of soft tissue (elastofibrosarcoma, myxofibrosarcoma), 1 case of malignant tumor of the sheath of the peripheral nerves (11th intercostal nerve), 1 case of desmoid disease (Figures 3a and 3b). Figure 3a: Chondrosarcoma with lobulated architecture and high celldensity grade II according to classification of O 'Neal and Ackermann, (X 10). Figure 3b: Tumorcells are provided with hyperchromaticnuclei with numerous images of binucléations (X20). hondrosarcoma grade II as classified by O'Neal and Ackermann.

All tumors were treated by a surgical excision with 2 to 5 cm of safety margins in the periphery. In depth, resections were limited to invaded underlying muscle (pectoralis, small pectorals, latissimus dorsi, sternocleidomastoid, trapeze), requiring in 31% of case a parietectomies with rib resection, ranging from one to 4 ribs. In 3 cases diaphragmatic resection was done with reattaching at the rib sus underlying. Only 62.5% who received a parietal reconstruction either by setting up a prosthetic polypropylene plate (3 cases), transposition of the latissimus dorsi muscle (3 cases), skin transplantation in 4 cases (from the anterior surface of the thigh); ending the gesture by drainage of the tumor bed by a drain of redon associated with pleural drainage in case of rib resection (4 cases) (Figure 4). 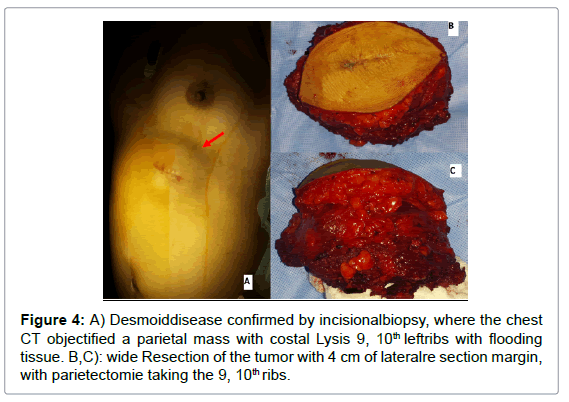 Figure 4: A) Desmoiddisease confirmed by incisionalbiopsy, where the chest CT objectified a parietal mass with costal Lysis 9, 10th leftribs with flooding tissue. B,C): wide Resection of the tumor with 4 cm of lateralre section margin, with parietectomie taking the 9, 10th ribs.

Duration of hospitalization was an average of 7 days with extremes, ranging from 3 to 10 days, the longest duration were the parietectomies extended carrying more than 2 ribs. We have noted no immediate postoperative Complications including : bruises or infections or partial or total necrosis because almost all of our patients have beneficied from a preventive postoperative antibiotics for 3 weeks.

The decline was between one to four years, where we have noted only 2 cases which had wound healing disorder, defined by the need for long-term local care with a directed healing in service of reconstructive surgery or Dermatology. Almost 18% of our patients were referred to the Department of Oncology for adjuvant radio-chemotherapy. We regret no case of death or loss of shreds in our study.

They may be initially asymptomatic, which explains the delay of time diagnostic which was with an average length of 21.52 months in our study. The disease can affect any age confused which was an average of 43 years with extremes of widely variable, on our study, and as reported in the literature, with a male predilection [4,5].

Due to the large variation in the origin of the chest wall tumors, the scanner coupled with MRI remains the gold standard and bestperforming for diagnostic, extensions [6], and preoperative mapping in order to better study the aggressiveness of the tumour and its endo-exo-thoracic extension, for a possible neo adjuvant treatment, and study the extent of resection and explore possibilities for parietal reconstruction [7].

Histological analysis of the tumor remains essential for the development of a correct therapeutic strategy [8], by fine-needle aspiration where Ayala [9] showed 79% accuracy in the diagnosis of exclusively bone tumours, that’s hilights the incisional biopsy with a macro-fragments, this last defines diagnosis in 31%.

Note that chondrosarcomas are the entity most frequent in terms of literature [10-13]. Yet in our study, the dermatofibroscaroma of Darrier and Ferrand ranked first, explained by the default oncological resection, which remains that the recurrence is a prognosis factor, very dependent of the surgical margin [14,15].

Tumor resection should be broad taking the tumor in monobloc [16,17], while respecting the safety margins (4 cm for malignant tumours, carrying a sus - and underlying ribs [18,19]; 2 cm for benign tumors, metastases and tumors of low grades [17]) which must be controlled by pathological examinations in extemporaneous; to minimize the risk of local recurrence and improve survival especially for recurrent tumors (Desmoids tumors, Dermatofibrosarcoma of Darier and Ferrand).

A study at the Mayo Clinic reported a survival at 5 years of 56% among those with a safety margin of 4 cm versus 29% when a margin of 2 cm or less could be obtained [18], which explains the good results obtained in our study; where there have been no cases of recurrence or death given that all our safety margins met the recommendations.

The reconstruction of the chest wall is the corollary of a large primary resection, which the principles have been reformulated by Mc Cormack [19]. In general, defects under 5 cm or less than 7 mm for the apical and scapular locations, or limited to 2 adjacent sides don’t require a reconstruction. A simple approximation of the adjacent ribs is sufficient [19].

On the other hand, the resection of 5 cm or less, located near the tip of the scapula may justify a reconstruction to avoid the isolation of the scapula in the chest wall. All other defects of 5 to 10 cm must be reconstructed [20-22].

Reconstruction may be biological: by the myocutaneous flaps of the thorax (latissimus dorsi, pectoralis major, large serrated, trapeze) can be mobilized on a rotation axis and transposed elsewhere on the chest wall [23,24] practiced in 20% in our study where the latissimus dorsi has been transposed with good postoperative evolution associated with a skin plasty. This last is especially practiced in the recovery of the sidewall; Advantageous by its organic nature, its long term stability and resistance to infection [25].

As it can appeal to synthetic materials as : Polyglactin (Vicryl®)- resorbable plates, polydioxanone (PDS®), polyethylene tetraphtalate no resorbable plates (Mersilene®), polypropylene (Marlex® Ouprolene®), plates of expanded polytetrafluoroethylene at 2 mm (Goretex®) [26], which have also the advantage of quick, easy and stable repair at the outset, used in 18% of cases of our study, when wide resection of more 2 ribs (Figure 5). Figure 5: A,B) Total Parietectomie for a desmoid with establishment of a resorbable plate of polypropylene with an immobilization redon. C,D): transposition of the muscle latismuss dorsal flap.

The parietectomie of a primary or metastatic tumor plans to prevent or treat complications such as bleeding, ulceration, metastatic extension and improve the quality of life of these patients [27], that said to prevent all postoperative complications that remain well-known:

At short term, the infection comes to mind observed in 7.4% in the A.Chapelier series [28], not deplored in our series explained by preventive postoperative antibiotic therapy; followed by the partial or total necrosis are rare in trained teams like Walker et al. [29].

At the longer term, the recurrences come in mind, more frequent during Dermatofibrosarcoma of Darier and Ferrand, reported in 18% cases in our series and 6% for bone tumors in type of PNET.

Postoperative morbidity is mainly linked to the surface of chest resection, in order to avoid the large defects, the intervention of a plastic surgeon or dermatologist experience for a directed healing (Figure 6) in 20% of cases reported in our study. We have no deaths, what remains consistent with the literature as to the series of Aukema, which reported a morbidity rate estimated at 20%, without detected mortality [30,31].

Figure 6: A) Wide resection of axillarytumor with 5 cm safety margins. B) Results after 7 months of healingled in reconstructive surgery service.

The parietectomie with parietal reconstruction during chest wall tumors became common, as long as it worsens, in itself, the prognosis. The results in terms of morbidity and mortality have become acceptable. Our study had limits having regard to the heterogeneous group of patients with sarcomas of soft tissue and included bones, as well as the small number of included patients. In addition, there was some significant prognostic factors; such as the surgical resection margins and the extent of resection that depending on diagnostic time and histological type; requiring a careful preoperative evaluation with a multidisciplinary approach for optimal results.