+441467840001
Pyrazole Derivatives with NCN Junction and their Biological Activity: A Review | OMICS International

Pyrazole Derivatives with NCN Junction and their Biological Activity: A Review

Copyright: © 2016 Abrigach F, et al. This is an open-access article distributed under the terms of the Creative Commons Attribution License, which permits unrestricted use, distribution, and reproduction in any medium, provided the original author and source are credited.

Pyrazole derivatives have their own importance in aromatic organic heterocycle family. Application of these derivatives in chemistry and biology has attracted increasing interest occupy a unique place in field of medicinal chemistry due to their wide spectrum of biological activities. There are known for their anticancer, antiviral, antibacterial, antifungal, analgesic and anti-inflammatory and activities and so on. Due to the importance of this chemical skeletons, the present review reports the recent progress (2010-2016) on the biological activities of some monodentate, bidentate, tridentate and tetradente compounds based on pyrazole moieties and containing NCN bonds which connecting between the pyrazole and amine unit.

In the course of searching for new drugs against diseases, the discovery, development and synthesis of new efficiency, active and less toxic molecules have been the object of many research works [1-5]. In this context, many structure of aromatic heterocyclic compounds have been investigated such as pyrazole [6], triazole [7] and tetrazole [8] due to the importance application of these skeletons in bioinorganic and medicinal chemistry [9-12]. In fact, more than 50% of all known organic compounds and most of the new drugs contain heterocyclic compounds [13]. In particular, heterocyclic compounds containing pyrazole moieties occupy a prominent place in this research due to their different and importance application in biology, pharmacology, industry and other sectors [14]. To date, a number of compounds containing pyrazole have been successfully commercialized, such as Celecoxib, Rimonabant, Sulfaphenazole and Penthiopyrad [15,16] (Figure 1). 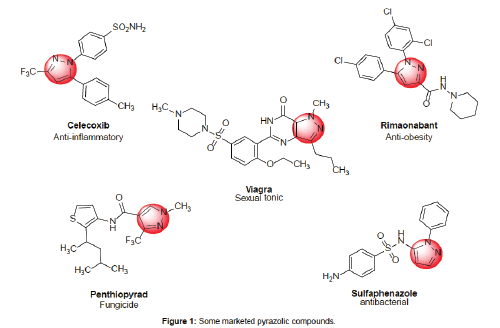 The noun pyrazole was given for the first time by Ludwig Knorr in 1883 [17]. Pyrazole refers to the class of simple aromatic 5-membered ring, characterized by the presence of two double bonds, three carbon atoms and two nitrogen atoms in adjacent positions (Figure 2). These scaffolds are classified as alkaloids, although they are rare in nature. In 1959, the first natural pyrazole, 1-pyrazolyl-alanine, was isolated from seeds of watermelons by Noe et Fowden [18]. 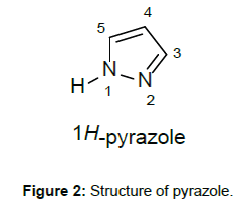 The access to the pyrazolic systems has been extensively studied and many changes are made since the first syntheses described by Knorr [19] and Pechmann [20] (Scheme 1).

Recently, many other works have appeared and used by different research teams to prepare the substituted pyrazole cycle [21-28].

The general method for the preparation of NCN junction pyrazolic compounds cited here is that reported previously in the literature without or after a modification of some reaction’s conditions [29-33]. All the compounds were prepared after a simple condensation between (3,5-dimethyl-1H-pyrazol-1-yl) methanol 1a, methyl 1-(hydroxymethyl)-5-methyl-1H-pyrazole-3-carboxylate 1b, ethyl 1-(hydroxymethyl)-5-methyl-1H-pyrazole-3-carboxylate 1c or (1H-pyrazol-1-yl) methanol 2 and various primary amines or diamines following the Scheme 2 below: 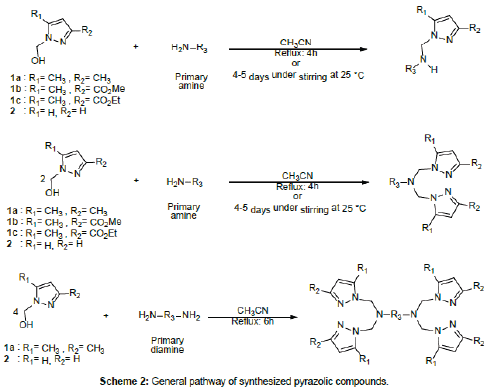 The all interest of these compounds is resumed in its sample and rapid pathway of synthesis adaptable to the user needs. Also, their structure presents a high importance in field of the organometallic chemistry. In fact, pyrazole containing ligands can be designed to be coordinated to metals through monodentate, bidentate, tridentate, and tetradente binding modes with various modifications of the ligand structure [34]. This strong efficiency capacity to complexing metals maybe due to the flexible N-donor bridging of these receptors. In additions, it is the NCN bridge that making these receptors became more conformational changes, allowing the receptors to bend or rotate freely when interacting with metal centers so as to conform to the coordination geometries of metal ions [35].

In previous work [36], we reported the synthesis of some novel compounds based on pyrazole and their anticancer activity against two tumor cell lines including breast (MDA-MB231) and colorectal (LoVo) cancers. We found that all these compounds present an antiproliferative activity against the two kind of the cell lines with varying IC50 values, which depended on the scaffold structure, the nature of the substituents and the sites of coordination of each compounds. We concluded that these compounds might therefore represent promising lead compounds for further development of anticancer drugs for human therapy (Scheme 3). 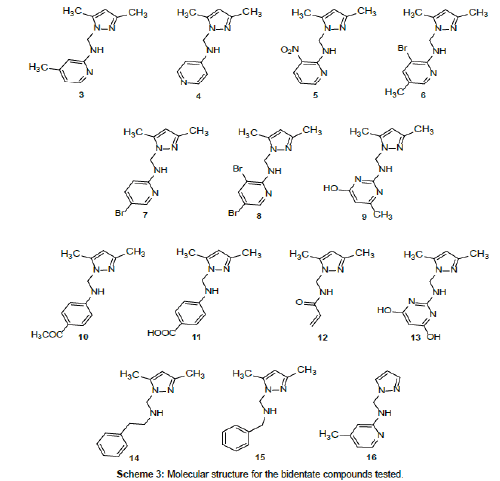 Scheme 4: Structures of the tridentate compounds.

A novel series of some tridentate compounds based on (3,5-dimethyl-1H-pyrazol-1-yl)methanol and ethyl 1-(hydroxymethyl)-5-methyl-1H-pyrazole-3-carboxylate was prepared by Radi et al. [38]. Their anticancer activity was investigated against three kinds of cancer. The authors reported that most of these compounds exhibited a moderate antitumor activity against the three human cancer cell lines (Scheme 5).

A series of new amino acid ester functional pyrazolyl compounds was developed by Boussalah et al. [39] to evaluate their antifungal activity against Fusarium oxysporum f. sp. albedinis fungal and Saccharomyces cerevisiae yeast. The given compounds were found to exhibit a considerable activity against the two studied microorganisms (Scheme 6). 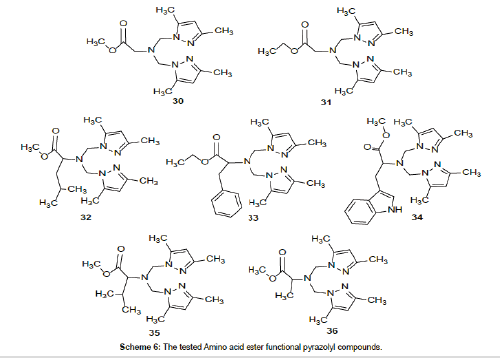 Bendaha et al. [40] synthesized a new pyrazolic compound (37) from 1a and a primary amine. The compounds 1a and 37 were investigated for their antifungal activity against Saccharomyces cerevisiae yeast. The results show that the both compounds had a toxic effect on the organism. They strongly suggest that this compound induce DNA damage and thus exert a different mechanism of action compared to other azole derivatives (Scheme 7).

Scheme 7: Preparation of the compound 37.

The antibacterial and antifungal potential against two fungal strains (Saccharomyces cerevisiae and Fusarium oxysporum f. sp albedinis) and one bacterial strain (Echerichia coli) of the tridentate 24 - 29 and four new pyrazolic derivatives 38, 39, 40 and 41 was reported by Radi et al. [41,42]. Based on the preliminary in vitro test results, the author concluded that some of these derivatives showed potent antimicrobial activity. Specially, the compounds 24, 26 and 28 (MIC=8.05, 8.08 and 7.05 μM respectively). The SAR evaluation showed that the presence of an electron-attracting nitro group or a +π electron effect (28 and 24) increase the activity. Whereas, the presence of an electron-donating methyl group decreases the activity (38 and 39). The two compounds 40 and 41 witch evaluated as acyclonucleoside analogues showed no antimicrobial activity against all the strains used in the test (Scheme 8). 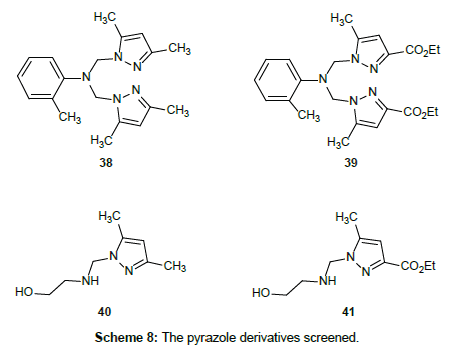 In another study [43], we tested in vitro the compounds 3 -16 previously cited, against one fungal strain, namely Fusarium oxysporum f. sp. albedinis and three bacterial strains, namely Bacillus subtilis, Micrococcus luteus and Escherichia coli. The results showed that some compounds containing (-OH) group and phenyl moiety have a considerable effect against tested bacteria and some compounds containing the (-Br) group have higher activity against tested fungal.

In our latest work [44], the synthesis and the antimicrobial effect of some new tetradente compounds based on pyrazole and primary diamines were studied. The antibacterial and antifungal test was carried out on Echerichia coli Bacterium and budding yeast Saccharomyces cerevisiae. All the compounds did not show any antibacterial activity against the gram negative strain when they were used at 500 μM. whereas, some synthetized compounds shown a strong inhibition rate on the budding yeast at 500 μM, especially the compound 46 (Scheme 9). 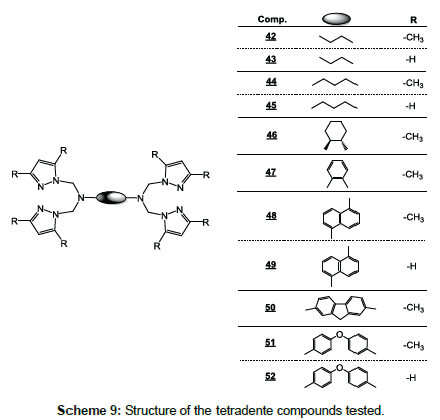 Harit et al. [45] screened the two bipyrazolic tripodal compounds 17 and 20 against various hyperactive enzymes such as urease, b-glucuronidase, phosphodiesterase, α-chymotrypsin, acetylcholinesterase and butyrylcholinesterase. The two compounds were found to be selective inhibitors of urease with an IC50 values of 44.66 and 43.46 μM respectively (vs. 21 μM IC50 for Thiourea which used as standard).

The inhibition of copper corrosion in aerated 3% NaCl solution was investigated by Hammouti et al. [46] using potentiodynamic polarization and linear polarization resistance (LRP) in the presence of different concentrations of the bipyrazolic compound 53. The tested compound was found to be efficient inhibitor of copper corrosion. Zarrouk et al. [47] studied the inhibition of the corrosion of carbon steel in 1M HCl solution by 2-[Bis-(3,5-dimethyl-pyrazol-1-ylmethyl)-amino]- pentanedioic acid (54) using different methods. The results showed that the inhibition efficiency increase with increasing of inhibitor’s concentration and decrease with the increase of temperature. In 2014 and 2015, we reported the inhibition efficiency of the compounds 7, 8 and 48, for mild steel corrosion in 1 M HCl solution [48,49], using weight loss measurement, potentiodynamic polarization curves and electrochemical impedance spectroscopy (EIS). A computational study was also made to calculate the quantum chemical parameters of the molecules using density functional theory (DFT) at B3LYP/6-31G (d,p) level (Scheme 10).

In 2015, Mouadili et al. [50] described the catalytic properties of complexes formed in situ with the compounds 6 - 8 and 13 - 16 and different metallic salts. The factors influencing the catecholase activity of these in situ complexes was investigated and the resultants showed that the highest rate of catechol oxidation was given by the combination formed by one equivalent of ligand 13 and two equivalents of Cu(CH3COO)2 salt in THF as solvent (V=27.449 μmol. L-1min-1). In same area, Takfaoui et al. [51] found that the in situ copper (II) complexes formed by compounds 3 - 5 and 9 - 11 are more efficient than those based on NiCl2, Co(NO3)2 and ZnCl2 salts.

Using liquid-liquid extraction process, Khoutoul et al. [52] investigated the capacity of the compounds 3, 5, 6, 9, 10, 15 to extract Cu2+, Cd2+, Pb2+, Co2+, Ni2+, Zn2+ and Fe2+ ions from aqueous solutions. The authors found that all the ligand except 15 have a high affinity and excellent efficiency to extract the bivalent Fe2+ ion. A theoretical study was also made and the results showed that the extractive activity towards Fe2+ ions increases with decreasing in molecular stability. In other hand, Harit et al. [53] reported The complexing properties of ligands 55-58 towards bivalent metal cations (Hg2+, Cu2+, Pb2+ and Cd2+) and alkaline metal ions (Na+, Li+ and K+). The ligands were found to be more selective to extract transition metal cations, especially mercury, copper and lead (Scheme 11). 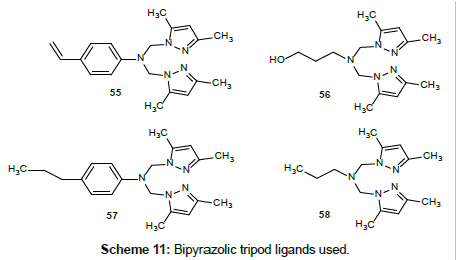 As seen on most of this paper, pyrazole moiety is a unique template that associated with several biological activities. This review highlightened research work of many researchers reported in literature that presented comprehensive details of pyrazole analogues and its pharmacological activity. The authors demonstrated that the efficiency of their compounds is very depended on the scaffold structure and the nature of the substituents groups on each one. But in fact, more investigations are needed and must be carried out to evaluate more activities of pyrazole and its derivatives for many diseases whose treatment are difficult in the medical sciences.

We are grateful to all our collaborators for their contributions to part of the data summarized here.