Radiation Exposure due to CT of the Scaphoid in Daily Practice

Copyright: © 2015 de Zwart AD, et al. This is an open-access article distributed under the terms of the Creative Commons Attribution License; which permits unrestricted use; distribution; and reproduction in any medium; provided the original author and source are credited.

Study background: The aim of this study was to measure radiation exposure including scatter radiation, resulting from CT of the scaphoid in different settings as used in daily practice and to calculate the effective dose (ED) using a wrist phantom.

Methods: The radiation exposure was quantified for five different CT protocols, all used in daily practice for the scaphoid CT. Two protocols concerned a CT of the scaphoid with a plaster cast of the hand and three protocols without. For all protocols the Computed Tomographic Dose Index weighted (CTDIw), the scatter dose to the brain and scatter dose to the torso were derived from the CT and measured externally with the Piranha dose meter.

Conclusion: The CT protocols used for scaphoid analyses in a plaster cast immobilized hand may result in higher radiation exposure than without plaster cast. We therefore recommend, whenever possible, performing CT of the hand and wrist without a plaster cast.

Computer Tomography (CT) is often used in the diagnostic workup of clinically suspected scaphoid fractures that are not evident on plain radiographs. CT is readily available, cheap, and fast [1]. The assumed specificity is 99% and sensitivity 93% [2], although a recent study showed a lower sensitivity of around 70% [3]. Despite its moderate sensitivity, CT remains the investigation of choice for the triage of suspected scaphoid fractures in many hospitals. A disadvantage of CT is the exposure to radiation. Since the damaging impact of radiation on tissue in the body is cumulative, radiation exposure should be kept as low as possible throughout a patient’s life according to the philosophy of ALARA (As Low as Reasonably Achievable) [4]. Moreover investigations have shown an increased risk of cancer after exposure to low dose radiation [5]. Radiology departments in Europe are obliged to abide by set reference levels of radiation exposure for each procedure according ICRP (International Commission for Radiation Protection) and the European EURATOM guidelines [6]. Diagnostic reference levels (DRL) for the extremities are currently being developed and, therefore, not yet available for CT of the scaphoid. Moreover, the DRL measurements do not include scatter radiation.

This study was designed to determine the radiation exposure of a CT of the scaphoid, including the scatter radiation, mimicking different clinical settings (with and without a plaster cast) in a phantom. These findings are of interest for clinicians and patients who should be informed of the potential health hazards they are subjected to.

This study does not involve humans or animals. Therefor approvement by the regional Medical Ethics Committee was not needed.

The direct radiation exposure on PMMA (polymethylmetgacrylate) wrist phantoms was measured. The construction of the phantom was based on the phantom description by Robertson et al. The phantom was constructed accordingly in our radiotherapy moldroom (Figure 1) [7]. The radiation dose was measured in CTDIw using the Piranha dose meter with a SD16 ionising chamber. For the scatter measurements the Victoreen 451B ionizing chamber was used. 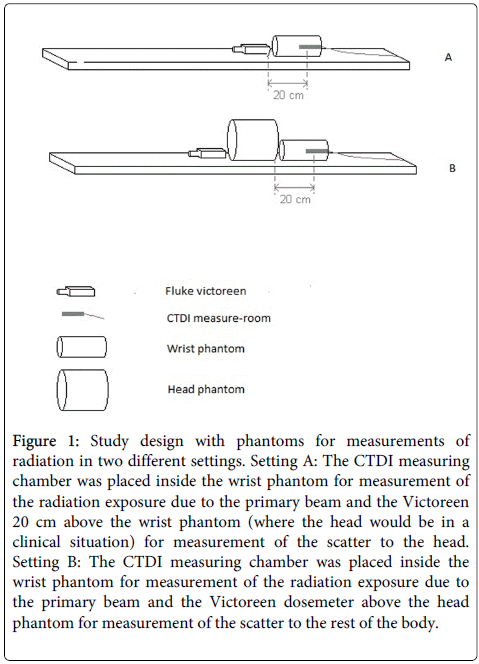 The radiation exposure was measured with the help of a phantom during five different CT protocols. These 5 protocols are commonly used for in-hospital imaging of the scaphoid. The parameters were chosen on the basis of best images for viewing the scaphoid, produced in the two radiological departments of our clinics. Three protocols concerned a CT of the scaphoid without a plaster cast and two described imaging of the scaphoid in a plaster cast. An overview of CT parameters for the five protocols is given in Table 1. For protocol one, four and five, three measurements were performed in setting A and three measurements in setting B. For protocol two and three, five measurements were performed in setting A and five in setting B (Figure 1). Conform our standard acute plaster protocol, a six layer plaster cast was used on the wrist phantom, in the way that it is normally applied in the acute setting. The CT was performed after the plaster had dried completely.

Table 1: CT parameters of five different CT protocols for diagnosing occult scaphoid fractures without and with a plaster cast.

The CT images were obtained with a multidetector scanner (General Electric Lightspeed Qx/I CT Scanner, Pewaukee, WI, USA), using the technique described by Sanders [8]. The phantom was positioned as if the patient lay prone on the scanner couch with the hand extended over the patient’s head. Section collimation was 0.625 mm with reconstructions every 0.4 mm (120 kVp, 80 mA, noise index 34). For multiplanar reformatted images, parameters were 2 mm slice thickness, 2 mm interval. All scans were obtained in the axial plane. With our 64-slice scanner the voxels are isotropic (i.e. 0.625 mm in the X-, Y- and Z-plane), so there is no difference with direct oblique coronal scanning. All reconstructions were performed using filtered back-projection. For comparison, no automated dose-reduction schemes were implemented.

With measurements of the CTDIw and the scatter radiation the effective dose (ED) was calculated using the following formula [9]:

Table 2: Overview of mean (standard deviation (SD)) for measured CTDIw, scatter to the torso, scatter to the brain and calculated ED for five different CT protocols used for diagnosing occult scaphoid fractures without (1,2 and 3) and with (4 and 5) a plaster cast.

Table 3 gives an overview of the measurements derived from the CT.

This study provides a quantification of the direct radiation exposure to the wrist when performing a CT of the scaphoid. Moreover, the ED including the scatter radiation to the brain and torso of the patient was quantified. The average ED for all five different CT protocols was 0.02 mSv which is equivalent to approximately 70 hours of background radiation, when assuming a background radiation of around 2.5 mSV a year [10]. Also, this study showed that the ED is almost twice as high when performing a CT of the scaphoid in a plaster cast compared to the situation without a cast. Due to the limited power of the study, however, this difference could not be demonstrated statistically.

The radiation exposure of a CT of the wrist is relative low and is comparable with a radiograph of the chest (0.04 mSv) [12]. The effective dose of other common diagnostic imaging procedures ranges from 0.001 mSv for radiography (X-ray)-Extremity, 0.4 mSv for mammography, and 1.5 mSv for radiography (X-ray)-Spine, to 15 mSv for Computed Tomography (CT)-Abdomen and Pelvis [13]. However, controversy exists about the dangers of low-dose radiation exposure in the clinical setting. A radiograph of the chest of a female child between the age of 0 and 9 leads to a lifetime risk of cancer of 1.9×10-6, and a radiograph of the chest between the age of 60 and 69 to a lifetime risk of 0.8×10-6 [14]. In the LSS Report 13 on the follow-up the 86,000 survivors of Hiroshima and Nagasaki from 1950-1997, it was concluded that solid cancer rates increased linearly with direct evidence of increased cancer incidence from exposures of 0.5 to 2.0 Sv (500-2,000 mSv), a dose markedly above that of average medical radiation and far more than a CT of the wrist. Further extrapolations of the LSS epidemiological data from low-dose radiation risk of the 65% of survivors exposed to radiation doses <100 mSv, however, did reveal a statistically significant risk of developing solid tumors even at doses <100 mSv in a linear non-threshold model [5]. Cancer risks are estimates from epidemiological studies and are subject to active, ongoing debate. Nonetheless, even in the face of disagreement and uncertainty, patient safety requires the assumption that the risk of radiation exposure is real; and that one should strive to maintain the lowest possible lifetime exposures. According to the ALARA philosophy, the radiation exposure must be kept as low as possible. Therefore, when performing a CT of the scaphoid, the CT protocol with the least radiation exposure should be chosen and that would be the protocol without a plaster cast. Also, the radiologist should consider reducing the scatter radiation by means of radioprotective shields whenever possible.

A limitation of the study was that we only measured the radiation exposure acquired by CT system (General Electric) with 5 protocols used in our clinic according the technique of Sanders [8]. Both protocol and CT system may differ per hospital. Additionally, in modern CT scanners it is possible to hold the arm more extended with consequently a greater distance between the wrist and the brain, resulting in lower radiation exposure of the brain.

A third limitation is that we have measured three protocols six times and two protocols ten times. There was no statistical base for the number of measurements and there was no specific reason for measuring in different numbers. In interpretation of the result the potential under-powering of this study should be taken into account. However, the range of the results were very small. So we believe these result are valid and reproducable.

Since the wrist is a relatively small object, it in itself does not generate significant scattered radiation. However, the use of different scanning protocols, additional materials (such as casts) could influence the amount of scatter substantially. The scatter components of the CT table are considered a common factor for all CT studies and have therefore been left out of the equation. An evaluation of the table composition and scatter could be a topic of further investigation. In summary, this study provides insight into the radiation exposure for patients with a CT of the wrist or hand, including the scatter radiation. The CT protocols used for scaphoid analysis immobilised in a plaster cast seem to result in higher radiation exposure and measurable scatter. With respect to the ALARA philosophy, CT’s of the wrist should preferably be performed without a plaster cast. A radio protective shield for the patient leads to less radiation exposure of the torso and could therefore be considered.