Copyright: ©2015 Serra MC, et al. This is an open-access article distributed under the terms of the Creative Commons Attribution License, which permits unrestricted use, distribution, and reproduction in any medium, provided the original author and source are credited.

Stroke is the leading cause of long-term disability [1]. We have previously shown that resultant hemiparesis leads to lean tissue wasting and decreased strength [2,3], which may impair and delay post-stroke recovery. The decline in muscle mass and strength following stroke are directly related to increased frailty, dependency, disability and falls [4-6]. Moreover, loss of muscle may contribute to declines in energy expenditure [7] and the subsequent weight gain [8] observed post-stroke. Thus, determining optimal strategies to maintain energy expenditure and energy balance (expenditure=intake) could be important to offset potential weight gain after stroke.

Total daily energy expenditure (TDEE) consists of resting metabolic rate (RMR), the thermic effect of food, and physical activity. Resting metabolic rate (RMR) is the component of energy expenditure that explains the largest proportion of total daily energy requirements. Individuals with a low RMR are at higher risk of significant weight gain, relative to those with a high RMR [9,10]. Although the effect of acute stroke on hypermetabolism has been examined [11-14], presently, only one study has examined RMR in chronic (>6 months latency) stroke [15]. de Sant’Anna [15] found that RMR of stroke survivors with hemiparesis is ~two fold higher than that of age and BMI matched non-stroke adults; however, several limitations of this study (i.e. accuracy of methods used to assess body composition and RMR) affect its clinical interpretability. Declines in fat mass, independent of changes in lean mass, do not appear to result in a decrease in RMR [16]; however, loss of muscle mass observed with other (non-stroke) chronic diseases [17], aging [18], prolonged bed rest [19], and detraining [20] are associated with a reductions in RMR. It is suggested that changes in muscle mass of 4.5 lbs can change RMR by ~50 kcals/day [21]. Since it is well established that RMR is determined largely by fat-free mass, accounting for ~60-70% of RMR [22] and large proportion of total body lean mass is found in the extremities, we hypothesis that muscle atrophy of the lower extremity may contribute to a reduced RMR post-stroke. Thus, the aim of this study was to determine RMR in chronic stroke and whether leg lean mass predicts a reduced RMR.

This cross-sectional study included 39 stroke survivors, between the ages of 45-80 years, which were recruited from the Baltimore area for participation in exercise rehabilitation studies. Participants were in the chronic phase of stroke recovery (at least six months prior) and had residual hemiparetic gait deficits. All volunteers signed University of Maryland Institutional Review Board approved informed consent forms.

Subjects received two weeks of heart healthy diet (<30% of calories from total fat, <10% of calories from saturated fat) counseled by a Registered Dietitian prior to RMR testing. Subjects reported to our lab first thing in the morning following a 12 hour fast. RMR was measured by indirect calorimetry (COSMED; Rome, Italy), while participants rested quietly in the supine position under a ventilated canopy for 30 minutes in a thermo-neutral and comfortable environment. Energy expenditure was calculated by the Weir equation [23] and expressed per 24 hours. Predictive RMR was calculated using the Mifflin-St Jeor equation [24], which considers weight, height, and age for both men and women. We selected the Mifflin-St Jeor equation since this newer equation is more likely to predict measured RMR than other methods [25]. 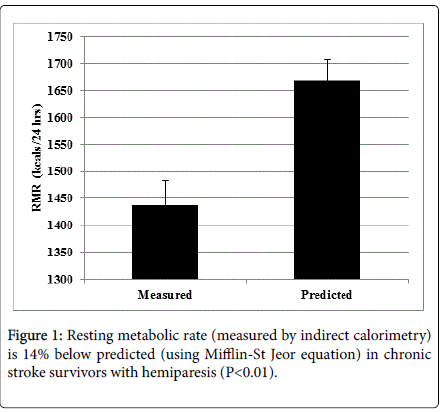 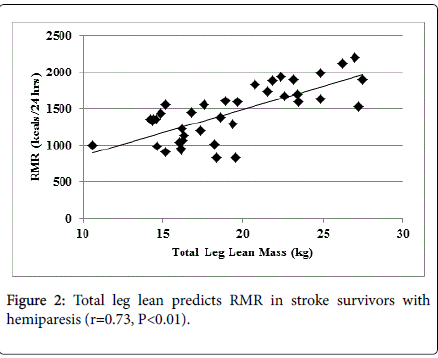 Chronic hemiparesis is present in nearly 50% of all long-term ischemic stroke survivors [1]. In addition to reductions in energy expenditure due to physical inactivity common with prolonged hemiparesis, we hypothesized that hemiparesis also may affect energy balance through stroke-induced muscle atrophy. Our data indicate that muscle atrophy post stroke may lead to a reduced RMR as we observed that RMR during the chronic phase of stroke is significantly lower than predicted. However, our data also point to the need to maintain overall lower extremity lean mass since it is a strong predictor of RMR regardless of paretic leg muscle atrophy following a stroke with chronic hemiparesis.

Our observation that RMR is lower than predicted is relevant to stroke recovery since studies suggest that lower RMR is a predictor of greater sequential weight change [26]. Further, maintenance of weight loss or weight gain is associated with compensatory changes in resting energy expenditure [27]. The low RMR post-stroke may further contribute to energy imbalance caused by physical inactivity. Our findings contrast the one previously published report of RMR in chronic stroke where RMR was ~two fold higher in stroke survivors compared to non-stroke controls [15]. Several differences in methodology may explain these variances. de Sant’Anna et al. [15] only required four hours of fasting in their measurement of RMR; yet, evidence suggests that 12 hours of fasting is required to ensure dietary nutrient clearance from the circulation [28]. RMR was only measured for 20 minutes in this previous study, while it is suggested that the accuracy of RMR is maximized if at least 30 consecutive minutes are measured [29]. Further, subjects were required to breathe through a mouthpiece with a nasal clip attached, which may have caused discomfort, preventing complete relaxation. We believe that our 30 min measurement of RMR using a ventilated hood, following 12 hours of fasting, may better indicate resting values.

Despite the small sample size, this study is strengthened by the inclusion of a diverse study population, including a wide range of ages (middle aged to elderly), ethnicities, and body composition (normal to morbidly obese). Since the incidence of stroke is higher in men than women (aged less than 75 years) [30], we believe this indicates that our predominately male gender distribution is representative of the general stroke population. Similar differences in lean mass between the paretic and non-paretic leg using DXA are observed previously by our group in chronic stroke [2,3] and others in acute stroke [31], further indicating generalizability to other stroke populations. We previously showed that lean tissue differences between the paretic and non-paretic legs are greater using computed tomography (CT) versus DXA scans [2]. It is possible that the relationship between RMR and lean mass could differ between legs if using a more sensitive measure of body composition, such as CT scans. Identifying a difference in the relationship between paretic versus non-paretic leg lean mass and RMR would further highlight muscle atrophy as an important target to prevent RMR changes and subsequent weight gain post-stroke.

Research efforts for effective treatment strategies to maintain a healthy body weight focus on diet and exercise programs. While we have previously reported improvements in body composition (muscle hypertrophy and decreased fat mass) following the initiation of exercise during the chronic phase of stroke [32-34], how these interventions affect RMR has yet to be reported. Less is known regarding dietary intake and how it could influence RMR post-stroke. This is despite evidence that albumin concentrations are lower in chronic stroke compared to non-stroke controls [35], indicating that protein intake is inadequate, which could lead to loss of muscle tissue. In non-stroke populations, protein supplementation can promote muscle protein synthesis, especially when combined with exercise training [36,37]. Future studies could examine the role of muscle hypertrophy on RMR and weight management following these lifestyle interventions during the chronic phase of stroke.

In summary, we observed that stroke survivors are at risk for a low RMR in the chronic phase of stroke. It appears that preserving overall lower extremity muscle mass may contribute in the maintenance of RMR after a stroke. This substantiates the need to attenuate the loss of lean mass, possibly with lifestyle interventions, after a stroke to prevent declines in RMR and possible weight gain common post-stroke.

The authors’ appreciation is extended to the volunteers who participated in this study. They are grateful to the medical team and exercise physiologists of the University of Maryland, School of Medicine Division of Gerontology and Geriatric Medicine and Baltimore VA GRECC and MERCE for their assistance in this project. This study was supported by NIH R01-AG030075, VA Merit and Career Development Awards, the Baltimore VA Geriatric Research, Education and Clinical Center (GRECC), VA RR&D Maryland Exercise and Robotics Center of Excellence (MERCE), and the National Institute on Aging (NIA) Claude D. Pepper Older Americans Independence Center (P30-AG028747). Dr. Ryan is supported by a VA Senior Research Career Scientist Award and Dr. Serra is supported by a VA CDA-2.