Relationship between Ancestry Inferred By Molecular Analysis, Self-Report and Hetero-Classification

Copyright: © 2015 Francez PADC, et al. This is an open-access article distributed under the terms of the Creative Commons Attribution License, which permits unrestricted use, distribution, and reproduction in any medium, provided the original author and source are credited.

Population stratification is the main cause of spurious results and the difficulty of replicating genetic association findings. In admixed populations, there is evidence that such proxies do not provide efficient control of stratification. We aimed to evaluate the statistical relationship between self-reported, hetero-classified and genetic ancestry, defined by categories of skin color and individual ancestry estimates and by the genotyping of 48 ancestry-informative indel markers in a sample of 130 volunteers from the city of Macapá in the Amazonian state of Amapá - Brazil. Five groups of self- reported skin color were defined: white, light brown, middle brown, dark brown and blacks, and three groups of predominant ancestry were defined: European, African and Native American. The results showed a significant correlation between skin color and predominant ancestry, self-reported and hetero-classified by volunteers, in comparison with the genetic ancestry, an important potential application of these AIMs in forensic investigations.

The genetic variations observed among different human populations are relevant in epidemiologic studies and can be used as a tool for the definition of information about the parental lineage in admixed populations. Although the biogeography of certain population groups in some parts of the world is culturally and genetically established, other groups have a relatively recent history of miscegenation, with ancestors coming from different continents. This is the case of the Brazilian population, characterized by the miscegenation of three philogeographic parental groups (Europeans, Africans and Native Americans), in regionally variable degrees of miscegenation [1,2].

Self-reported ancestry is a method described as having high correlation with the genetic structure of the population in welldefined and stratified philogeographic groups, such as the Europeans, Africans or Asians [3-5]. In highly miscegenated populations, however, both the declared ancestry or other anthropometric human features usually employed, such as skin color, prove controversial and are not very reliable for assuming ancestry [5-8]. In this context, the use of molecular genetic markers could be of great value to reduce the potential consequences of stratification in these populations [6,9,10].

Regardless of any sociological and anthropological context, in Brazil, according to the Brazilian Institute of Geography and Statistics (Instituto Brasileiro de Geografia e Estatística - IBGE), race and skin color are treated as equivalent in the demographic classification. In most Brazilian genetic association studies, control of the population structure is carried out based only on the self-reported skin color, the evaluation of anthropometric features, a genealogy analysis or the interviewer’s subjective opinion [11-15].

While the grouping of individuals based on self-reported ancestry is a typical procedure for determining philogeographic groups in studies of the Brazilian population, the recent utilization of molecular markers for inferring genetic ancestry has revealed great genetic heterogeneity [16-22]. One of the problems of conducting association studies in miscegenated populations by using only self-reported ancestry or skin color as equivalents of ethnicity is the possibility of a spurious association with false-positive or false-negative results [23-29].

An increasing number of publications have reported the use of ancestry- informative markers (AIMs), whose allelic frequencies vary significantly among populations of different geographic origins and can be employed to estimate individual admixture and to identify a population substructure. In most of the studies, single nucleotide polymorphisms (SNPs) were used [30-33], but insertion/deletion markers (INDELs) with small DNA fragments [29,34] and Short Tandem Repeats (STRs) [35] have also been employed.

Genetic variation studies using DNA polymorphisms distributed throughout the genome have allowed a better understanding of the history and diversity of human populations and have provided a genetic identification system of individuals. Insertion/deletion polymorphisms` (INDELs) are length polymorphisms produced by insertions or deletions of one or more nucleotides in the genome. In the last years, the INDEL-type polymorphisms have been given attention in many studies.

In 2002, Weber et al. [36] identified and characterized 2000 biallelic polymorphisms of the INDEL type in humans, with a great variation in the length of the observed alleles, abundant in the genome and easy to analyze, bringing these markers into evidence for use in genetic investigations. Ever since, several studies have been conducted using INDELs for a great variety of purposes, including investigations of relatedness, addressing the genetic structure of human populations and using them as genetic markers in natural populations [37-40].

The objective of this work was to evaluate the relationship between self- reported/hetero-classified ancestry, skin color and individual genetic ancestry estimated by using 48 insertion/deletion polymorphisms in an admixed population sample from the Brazilian Amazon region.

Peripheral blood samples were collected from 130 healthy and unrelated individuals (63 male, 67 female, with a mean age of 37.5 years, varying from 18 to 69) seen for routine exams at the Clinical Analysis Laboratory (Laboratório de Análise Clínica UNILAB) in the city of Macapá (0° 02’20 “N; 51° 03’59” W), State of Amapá, northern Brazil. After the blood collection, digital images (photographs) of all 130 volunteers were also taken and recorded. All participants in this study signed a free and informed consent form.

Self-report: In the interviews with the volunteer study were analyzed the skin color, predominant ancestry and percentages of ancestry (African, Native American and European) obtained by selfreport. In other words, each of the 130 subjects indicated that skin color, predominant ancestry and percentage of European, African and Native American ancestry who believed present.

Hetero-classification: The recorded digital images of each study subject were presented to another group, composed of 40 volunteers (24 women and 16 men, with a mean age of 25.3 years, varying from 18 to 58), selected mostly among university students or graduates who signed a free and informed consent form by which they agreed to take part in the research. These volunteers evaluated issues regarding skin color, predominant ancestry and ancestry percentage of the 130 photographed persons (hetero-classification).

No specific period of time was determined for the evaluation of the digital images by the volunteers (hetero-classification), and most of the analyses took between 40 minutes and one and a half hour.

The hetero-classified ancestry and skin color of each one of the 130 subjects was defined based on the majority of statements obtained in the enquiry, i. e., the test subjects were included in a given skin color (white, light brown, medium brown, dark brown, and black) or predominant ancestry (African, European and Native American) category if at least 20 (50%) of the evaluators assigned them to the same category.

The genotypes obtained for the 130 samples investigated were analyzed with regard to their interethnic admixture using the Structure software http://pritch.bsd.uchicago.edu/software/structure2_1.html), and the FST matrix and WPGMA tree analysis were carried out with the GDA program. The tree was displayed by means of the TreeView software http://taxonomy.zoology.gla.ac.uk/rod/treeview.html [42,43].

This study was submitted for analysis to the Ethics Committee of SEAMA College and was given approval, under protocol: 133/2010.

DNA samples from the 130 study subjects were analyzed, comparing them with the genetic profile of the three parental groups (Africans, Europeans and Native Americans) using the 48 AIMs described earlier. The STRUCTURE program allowed estimating for the population of Macapá a mean ancestry of 21% African, 50% European and 29% Native American. These ancestry percentages are in accordance with those estimated in previous studies which employed genetic markers with bi-parental inheritance for the same population [42,43] and for other miscegenated Brazilian populations [44-48] (Supplementary Tables 2 and 3).

These results indicate that the majority of the participants of the study are convergent in their opinion with regard to skin color when evaluating persons with the most extreme skin colors (white/light brown and black/dark brown). 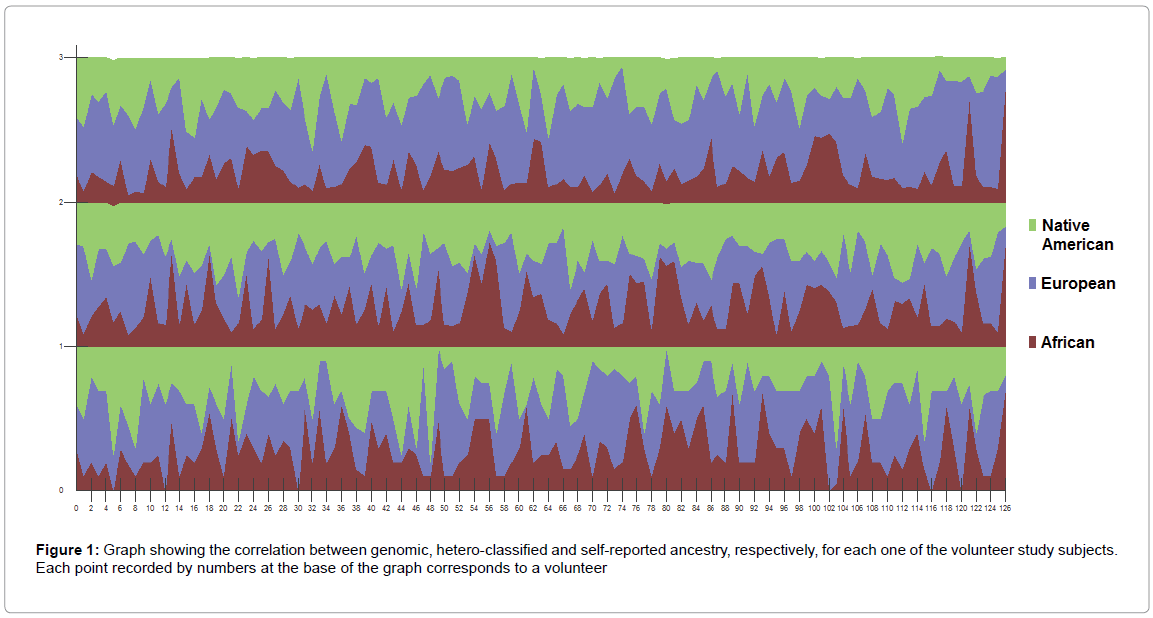 Figure 1: Graph showing the correlation between genomic, hetero-classified and self-reported ancestry, respectively, for each one of the volunteer study subjects. Each point recorded by numbers at the base of the graph corresponds to a volunteer

An important point to be highlighted is the fact that, the observed correlation notwithstanding, the African and – to a lesser extent - the Native American contributions were overestimated and the European contribution was underestimated, comparing the self-reported/heteroclassified and the genetic ancestry. This result can be explained by the strong association observed between skin color and ancestry. A person with black or brown skin is automatically appointed as having a high degree of African ancestry, regardless of other characteristics. The same result was also reported by Santos et al. [39].

Some studies on ancestry [49] suggest that an attempt to correlate genetic ancestry based on AIMs with phenotypic characteristics such as skin color or another feature that is relevant in criminal investigations would not be applicable in Brazil, given the high degree of miscegenation of the population. However, many of these studies used AIMs which are not significantly different from the allele frequencies observed in the parental populations. These AIMs have often been selected for studies involving European populations and, when employed in Brazil, eventually overestimated the percentages of European ancestry and minimized the African and Native American contribution, making the Brazilian population seem much more homogeneous than it actually is.

The MULTI-INDELS panels described in this study were tested in different forensic samples and various concentrations of DNA and showed satisfactory results proving to be a promising technology in criminal investigations [50]. This molecular tool was first employed assisting a criminal investigation in the identification of two skeletons found in a small boat adrift located in the Atlantic Ocean near the north coast of the Brazilian Amazon region, in the state of Amapá. After speculation that the crew would be Africans, molecular analyzes using the AIMs MULTI-INDELs have been shown to treat admixed individuals, predominantly with African ancestry but with significant percentage of European and Native American ancestry, indicating that probably would be from the American continent, possibly in some region of northern South America or the Caribbean [51].

In conclusion, this AIM panel allowed inferring percentages of genetic ancestry which, after statistical analysis, proved significantly consistent with the ancestry estimates and the skin color classification of the volunteer study subjects obtained by hetero-classification and self-reports, indicating a potential application in crime investigations without suspects or in the identification of missing persons and unknown cadavers.

Furthermore, the use of MULTI-INDELS panels features easy processing, fast reading results and does not require significant adjustments in Forensic Genetics laboratories already deployed, since it uses the same team chemistry and keeping the simple workflow is already established for STRs.

The authors greatly thank the volunteers who agreed to take part in this study and to Dr. Ricardo Ventura Santos for their corrections and suggestions regarding this study.