+44-1647-403003
Remission in the Patient with Malignant Pleural Mesothelioma: A Case Report

Remission in the Patient with Malignant Pleural Mesothelioma: A Case Report

Here, we report the patient with Stage IV malignant pleural mesothelioma (MPM), who has reached the remission in 5 months of treatment with experimental targeted product (WO/2017/052419). The remission has been confirmed by PET examination performed in German clinic - as the absence of tumor tissue in primary localization and the absence of the distant metastases. Previous patient’s treatment was not successful. Previous treatments included 6 courses of combined chemotherapy consisted of cisplatin, pemetrexed, and bevacizumab; visceral and parietal pleurectomy combined with hyper-thermic intrathoracic chemotherapy (HITHOC); 6 courses of combined therapy with monoclonal antibodies nivolumab and ipilimumab. All that treatments did not demonstrate necessary clinical effect. The therapy with monoclonal antibodies caused also severe side effects- polyarthritis. Due to all these reasons and significant worsening of patient’s general condition and laboratory parameters, the patient according to his freewill decision started treatment with experimental targeted product (WO/2017/052419) as single anti-tumor agent and in 5 months has reached the remission. General condition improved significantly as well. ECOG score changed from 2-3 points at the therapy start to 0-1 point in 5 months of the treatment. The patient fulfils his routine duties in the office.

Here, we report a clinical case of the patient with epithelioid malignant pleural mesothelioma on the left side. The patient is 53-yearsold man, Caucasian. The diagnosis has been established in February 2017. The symptoms (the temperature, cough, weakness, chest pain) of the disease appeared at the end of the year 2016. It took some time to perform differential diagnosis versus tuberculosis. Exposure to asbestos was evaluated as possible. The patient smoked 3-6 cigarettes per day.

The tumor cells express WT1, D2-40, calretinin and CK5/6. No expression of CEA and BerEP4. The chemotherapy started in April 2017. The patient obtained six cycles of combined chemotherapy consisted of cisplatin, pemetrexed, and bevacizumab in Oncology Department of Sheba Medical Center, Israel.

Unfortunately, that treatment was not effective. Due to the disease progression and general condition worsening the left thoracotomy was performed in December 2017 with pericardial resection, diaphragmatic resection, and visceral and parietal pleurectomy combined with hyperthermia intrathoracic chemotherapy (HITHOC).

The surgical intervention was performed in the Center for Pulmonology and thoracic Surgery of Academic Teaching Hospital of Ludwig Maximillian’s University Munich, Germany. The disease reoccurrence was detected by the specialists of Munich center during the exam at 26APR2017. The PET conclusion and description dated 26APR2018 (Figure 1). PET/CT signs of pathological metabolically active process with lesions pleura to the left (mesothelioma). Hypermetabolic changes in the retroperitoneal and paravertebral lymph nodes, more likely to be metastatic.

Chest cavity: In the study of glucose metabolism, the foci of pathological hyperfixation of the radiopharmaceutical are determined, respectively:

• hypervascular formations in the pleura, ranging in size from 6 to 26 × 13 mm, in the paravertebral regions on the left, at the level of 6 to 11 thoracic vertebrae, the intensity of the accumulation of radiopharmaceuticals (SUVmax) reaches 13.13.

• hypervascular various-sized formations in the region of the middle floor of the anterior mediastinum, with a maximum size of 16 × 11 mm, SUVmax up to 11.6. The state after the left pleurectomy, the mediastinum is displaced to the left, postoperative clips are determined in the supraphrenic regions on the left.

In the lungs without infiltrative changes. In the basal regions of the left lung, fibrous cords and adhesions are determined, and in S5 to the left there is a single focus of fibrosis of up to 5 mm in size, without signs of glucose hypermetabolism. The lumen of the trachea and large bronchi are traced. Lymph nodes (thorax and intrathoracic) are not enlarged, single anteroposterior and paratracheal lymph nodes are determined up to 6 mm, without signs of glucose hypermetabolism. Exudate in the pleural cavity was not detected. The heart and vascular structures of the mediastinum are not changed. Pericardial effusion was not detected.

Abdominal cavity and the small pelvis: In the study of glucose metabolism in the organs and tissues of the abdominal cavity, retroperitoneal space and small pelvis, the centers of hyper fixation of radiopharmaceuticals are determined:

• Respectively, several para-aortic lymth nodes located at the level of the left adrenal gland, ranging in size from 7 mm to 13 × 11 mm, the accumulation intensity of radiopharmaceuticals SUVmax up to 10.07.

• Respectively, single paravertebral and single interpeduncular lymph nodes, sizes up to 10 mm. SUVmax up to 8.77.

Combined therapy with monoclonal antibodies was administered to the patient:

The patient obtained 6 cycles of the immunotherapy in Munich clinic. During the period April-June the dynamic of CT changes was negative-increased number of metastasis and its size. During the period June-July-there were no significant changes on CT pictures. However severe polyarthritis developed in the patient. It was very painful and caused patient’s disability. Large and small joints were affected. The patient suffered a lot. Physicians evaluated the immunotherapy as the reason for this polyarthritis. At the beginning of July, the patient stopped immunotherapy. At the end of July, the patient according to his freewill decision (confirmed juridical in written form) started the therapy with targeted product (WO/2017/052419).

In six weeks of the treatment significant positive CT changes have been detected (Figures 2 and 3). General condition was stable. The fluid in pleural cavity disappeared. 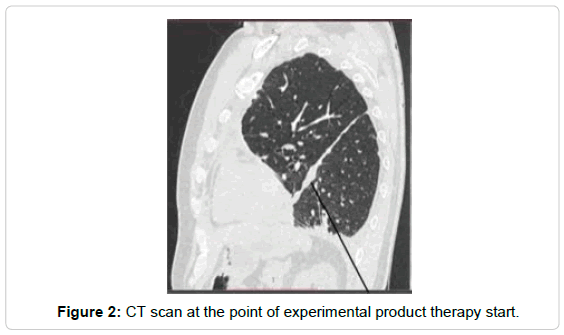 Comparative Conclusion (Figure 3 vs Figure 2): CT scan signs of single metastasis in S5,6 of the left lung are stable. Size reduction and the number of former multiple metastases in the interlobar pleura of the left hemithorax, in all departments of the chest wall of the left hemithorax. Reducing the size and quantity to normal values. Lymphatic mediastinal nodes; paravertebral lymphatic nodes at the level of the vertebral bodies Th12 and L1; paraaortic lymph nodes at the level of the abdominal section. In comparison with previous data from - the positive trend (Figures 2 and 3).

ECOG score changed from 2-3 points now of the therapy start to 0-1 points in 5 months of the treatment. ECOG score at the “5 months point” has been specified by polyarthritis as the side effect of the treatment by monoclonal antibodies (Figures 4 and 5). The status of polyarthritis improved significantly however it still had been presented. The inflammation of large joints resolved by the end of November. Registered adverse events during experimental treatment were evaluated as not severe. Detected abnormalities were managed by concomitant medication administered per os. Soft infusion therapy was applied within three days during the first month of the treatment. As the reference the copy of the PET Conclusion prepared by specialist from Munich clinic is attached below. Its translation in English is attached as well. Only patient’s name and the patient’s birth date are removed from the pictures to ensure the patient’s confidentiality. The following PET results were used for the comparison: PET results dated 26APR2018 and 05DEC2018.

Lack of evidence of metabolic activity (no FDG storage) in left pleural mesothelioma (both in the primary tumor and in the previous intra-abdominal lymphatic node metastases or in other locations). Thus, a full remission may be assumed. The patient fulfills his routine duties in the office.

There remains a substantial need for alternative approaches to MPM therapy as outcomes with traditional chemotherapy regimens remain disappointing, with high failure rates and significant side effect profiles. Here, we report a case of the patient with MPM who experienced rapid disease progression after standard chemotherapy but had an exceptional and continuous response to the therapy with single agent WO/2017/052419. Based on the response achieved in the patient, WO/2017/052419 may have significant perspectives for future therapy of MPM.

Copyright: © 2019 Firsov IS, et al. This is an open-access article distributed under the terms of the Creative Commons Attribution License, which permits unrestricted use, distribution, and reproduction in any medium, provided the original author and source are credited.