Background: Globally, respiratory diseases are common causes of medical admissions. Our objective was to determine the causes and outcome of respiratory diseases in our facility for health planning, policy formulation and allocation of resources.
Method: A retrospective study of all respiratory-related admissions between January 2011 and December 2015. Classification of diseases was based on the ICD-10 coding system.
Results: Respiratory-related admissions accounted for 460 (12%) of all medical cases with a slight male preponderance of 1.4 to 1. Mean age of patients was 50.4 ± 20.8 years. The majority 342 (74.3%) of these admissions were due to communicable respiratory diseases. Pulmonary tuberculosis (44.1%) and pneumonia (28.9%) accounted for the highest admissions which were closely followed by COPD (11.1%) and asthma (7.2%). The commonest co-morbidity was HIV/AIDS (12.3%) which also coexisted with other diseases in most cases of mortality. The median hospital-stay was 7 days. Most diseases had peak presentations during the dry season except bronchial asthma with rainy and dry peak seasons. The overall mortality was 17.6% and the highest mortalities were recorded in patients who had pulmonary tuberculosis (55.5%), pneumonia (20.9%) and COPD (8.6%).
Conclusion: Communicable respiratory diseases are the leading causes of morbidity and mortality. Scaling up on coverage of the control programmes as well as the methodical integration of non-communicable diseases into already existing control programmes will further strengthen the health-care systems in resource-limited settings.

Respiratory diseases are leading causes of morbidity and mortality worldwide [1]. Hospitalization due to these conditions is an indicator of the burden and severity of these diseases as well as the general wellbeing of the populace [2,3]. A wide range of diseases, from the mild cases to the life-threatening, are known to be associated with the respiratory system. Therefore, highlighting these respiratory-related diseases based on the frequency of mortality and morbidity is crucial, for health planning and policy formulation, especially in resource limited settings [2]. Respiratory-related admissions are major public health conditions worldwide, either the communicable or noncommunicable diseases, ranging commonly from pulmonary tuberculosis, pneumonia to chronic obstructive pulmonary disease and asthma [4]. Despite the epidemiological transition of diseases, communicable respiratory diseases still constitute a huge burden in sub-Saharan Africa mainly due to the associated HIV/AIDS epidemics which was responsible for the resurgence of pulmonary tuberculosis in the last two decades [5,6]. More so, the pattern of diseases in developing countries is diverse, from the developed countries, as most death often results from infectious diseases due to the relatively high disease burden in these countries contrary to developed countries with more of non-communicable diseases [7].

In India, about 40% of deaths are from respiratory and infectious diseases as compared with 8% in developed countries [4]. Likewise, non-communicable respiratory diseases that were hitherto regarded as uncommon are now constituting a huge burden, even in developing countries [8]. Furthermore, the global burden of lung cancers is on the rise as tobacco smoking has also increased, even among females, in the developing countries [9]. In spite of the epidemics of the chronic non-communicable diseases like cardiovascular and metabolic diseases in developing countries, as already established in the developed ones, communicable diseases are still a major threat. Erstwhile studies have been conducted in several parts of Nigeria on the profile of respiratory-related medical admissions [10,11], but none has been documented in Ekiti State University Teaching Hospital, Ado-Ekiti, Nigeria.

EKSUTH is a new generation tertiary institution located in the south-western part of the country and serves as a referral health center for other facilities within (16 General hospitals and 32 comprehensive health centers) and outside the state. Forty-six of the three hundred bed hospital is dedicated to the admission of medical cases with an equal division between the males and females. The major entry points into the wards are the outpatient departments, chest clinic, and the emergency unit. Both the male and female wards have separate isolation wards for admissions of contagious diseases. Respiratory medicine is one of the eight major subspecialties in the department of internal medicine saddled with the responsibility of attending to medical cases. Diagnostic support is rendered by the laboratories (chemical pathology, histopathology, microbiology and haematology) and the radiology unit.

However, a few admissions were recorded for interstitial lung disease, allergy, pneumothorax and laryngeal tumor which all had 1 (0.2%) occurrence respectively.

Table 2 shows a bimodal distribution in the occurrence of pneumonia in the young adults and elderly whereas pulmonary tuberculosis affected more of the young adults while COPD was highest in the elderly.

There was a steady decline in the annual admission pattern of the major respiratory diseases. 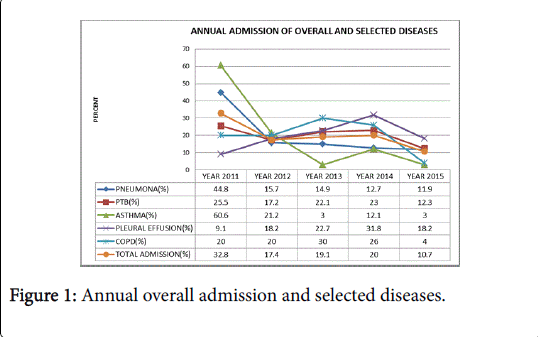 Table 3 shows the frequency of comorbidities associated with the different respiratory diseases during the study period. HIV/AIDS (12.3%) was the commonest comorbidity, remotely followed by corpulmonale (3.0%), diabetes mellitus (2.6%) and congestive cardiac failure (1.9%). HIV and diabetes mellitus coexisted in 2 patients.

Table 3: Frequency of comorbidities among patients with respiratory disease.

Similarly, HIV/AIDS (14.8%) as a comorbidity was identified in most mortalities. Of the major respiratory diseases, the prevalence of HIV/AIDS was 23% and 5% in patients with pulmonary tuberculosis and pneumonia respectively. The main comorbidities in patients with COPD are cor pulmonale (26%) and congestive cardiac failure (8%).

Table 2 also shows that there is a large proportion (55.8%) of patients with respiratory diseases presented at the peak of dry season with the rest of the year recording an almost equal disease occurrence except bronchial asthma with another spike during the rainy season. There were few admissions in December, despite January recording the highest admissions. Mortality was least reported in the last quarter of the year, however, the majority (90.1%) of deaths was reported in January.

Three hundred and sixteen (68.7%) patients were treated and discharged from the hospital following remarkable clinical improvement. A few (6.1%) were referred to other centers while 7.6% of the patients left against medical advice. However, the mortality recorded was 17.6%. The highest mortality was recorded in patients with pulmonary tuberculosis (55.5%), followed by pneumonia (20.9%) and COPD (8.6%). Only one case was reported to have died, of all patients admitted, with bronchial asthma. 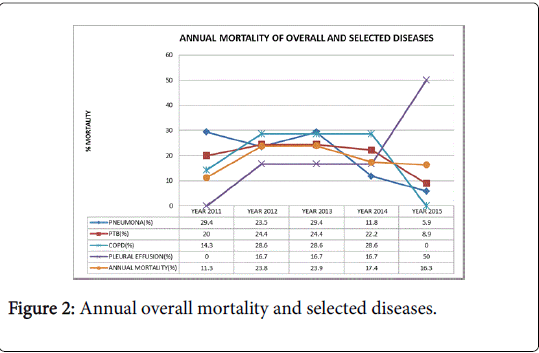 The study shows that the burden of respiratory diseases is enormous. TB and HIV/AIDS were the leading causes of morbidity and mortality in patients admitted to our facility. In our study, pulmonary tuberculosis constituted about 44% of admitted respiratory cases which was comparable to reports from previous studies [10,11]. Pulmonary tuberculosis is a major health challenge in the developing countries and the burden is fuelled by the dual epidemics of HIV/AIDS and NCDs like diabetes mellitus [12]. In addition, more than half of the admitted cases of pulmonary tuberculosis were young adults and these are the productive, sexually active age group who are also plagued by HIV/AIDS [13]. Twenty-three percent (23%) of the TB patients were co-infected with HIV/AIDS, emphasizing the importance of HIV screening in all TB patients as this co-infection is a major cause of mortality and worsened treatment outcome [14,15].

HIV is rapidly becoming a chronic illness as life expectancy and comorbidity increase among PLHIV [16]. It constitutes the highest comorbidity as well as mortality among respiratory admissions in our study. The remarkable decrease in HIV-associated morbidity and mortality has been attributed to the advent of HAART, however, the late presentation for the commencement of treatment may account for mortalities in our study [17]. Despite the use of HAART, respiratory infections and pneumonias are emerging as major comorbidities in PLHIV. Among our study population, 5% of patients treated for pneumonia tested positive for HIV infection. This could be a resultant effect of bronchial epithelial cell differentiation and suppression of tracheobronchial mucociliary clearance by HIV which results in microbial colonization of the respiratory tract [18].

There is insufficient data on pneumococcal and influenza vaccination policy in Nigerian adults, unlike in children, who are equally at risk of considerable mortality and morbidity from pneumonia. The bimodal distribution of pneumonia, which accounted for 28.9% of respiratory admissions, could be due to the HIV coinfection among the young adults while the underlying medical conditions, advancing age and lifestyles like smoking and alcohol consumption could be responsible in the elderly [19]. Implementation of national guideline for the prevention of pneumonia in the elderly and any adult at risk would reduce the burden of this disease and its complications.

COPD is a major non-communicable respiratory disease with a rising global burden and estimated increase in mortality. Similarly, our results show COPD has the leading cause of mortality and morbidity due to a non-communicable respiratory disease. This percentage is relatively lower than what was found in the major communicable respiratory diseases, however, this is not unexpected as COPD is often universally underdiagnosed [20]. This systemic disorder with several extrapulmonary manifestations had comorbidities in the admitted patients with cor-pulmonale and congestive heart failure in 26% and 8% of patients with COPD respectively. Increasing evidence has linked chronic inflammation in COPD to the comorbidities which, if recognized early by the attending physician, could influence modality of disease management and prognosis [21].

Our findings are in accordance with previous studies documenting extremely low percentages of admitted cases of interstitial lung disease, lung cancers and acute respiratory distress syndrome [11,21]. Similarly, even in immunocompromised patients, opportunistic infections like pneumocystis jirovecii pneumonia, pulmonary toxoplasmosis and pulmonary nocardiosis were not found in our study. These conditions could be under-reported due to the lack of necessary equipment for specimen collection and diagnosis [22].

A previous study had reported more hospitalizations from asthmatic emergencies and pulmonary tuberculosis during rainy (wet) season while pneumonia and COPD exacerbations were during the dry season [23]. Our findings show a bimodal seasonality (both rainy and dry seasons]. in asthmatic emergencies while pulmonary tuberculosis, pneumonia and COPD recorded highest frequencies during dry seasons. This bimodal seasonal presentation in asthmatic emergencies could be due to the possible triggers like excessive viruses and pollens during these different seasons. Nonetheless, the seasonality of exacerbation in the other major respiratory diseases may be related to the oscillation in pathogen’s reproductive number and survival during such periods [24,25].

Despite the current implementation of public health measures in the control of TB-HIV, high morbidity and mortality were observed in our study. This could be due to the delay in patients’ presentation to health facilities, ignorance and poverty. Improving health education and advocacy programme as well as scaling up on coverage of the control programme to integrate NCDs would be necessary to avert this occurrence.

Institutional ethical approval was obtained from Ekiti State University Teaching Hospital’s ethical committee. The informed consent form was waived, since data were obtained from the hospital records after patients’ discharge, without any contact with the patients.

The authors declare no competing interests.

Copyright: ©2018 Adeoti AO, et al. This is an open-access article distributed under the terms of the Creative Commons Attribution License, which permits unrestricted use, distribution, and reproduction in any medium, provided the original author and source are credited.