Copyright: © 2015 Wilson JL, et al. This is an open-access article distributed under the terms of the Creative Commons Attribution License, which permits unrestricted use, distribution, and reproduction in any medium, provided the original author and source are credited.

Y-chromosome lineage analysis is very useful for confirming a relationship between paternal relatives separated by various circumstances. In this study, we attempted to reconnect three paternal lineages who all share the same rare Ashkenazi Jewish surname Korenbaum or a derivative of that name. Even though some of the men tested from each of these three lineages were from different continents, they all shared an oral history of a male ancestor from the Bug River region in modern day Belarus and a strong reference to familial separation. Because the surname is exceedingly rare, it is believed that all Korenbaums are related. However, genealogical research has thus far been unable to connect several distant branches including a large branch living in Germany Today Korenbaums are spread around the world, with significant populations in the United States, Israel, France, Russia, Germany, England
and other countries. The Y-DNA analysis was performed using four Y-chromosome biallelic markers and twelve YSTR markers to determine the haplogroup and haplotype for the various Korenbaum descendants. It was determined that all three Korenbaum lineages possessed the same rare haplotype belonging to the Near East Yhaplogroup E1b1b1b2a. This analysis supports that these lineages share a common paternal ancestor. Two of these lineages were confirmed by genealogical records to have a common male ancestor born in the mid-19th century. While the third lineage could not be directly connected though genealogical records, the rareness of the surname, their shared oral history, the age of Ashkenazi surnames and records of the oldest Korenbaum ancestor point to a likely common ancestor born in the late 18th century in modern-day Belarus. We conclude that Ychromosome
analysis is a powerful tool in lineage confirmations of displaced peoples. However, its usefulness is
greatly diminished if not used in conjunction with other investigative tools. Further work on the Korenbaum family may prove useful for understanding Y-lineage evolution rates and dating.

The identification of long lost relatives can be a daunting task for any family; however, it can be determined by paternal phylogeny analyzing specific Y-chromosome sequences [1]. This is especially true of Ashkenazi Jewish families whose ties to relatives have frequently been broken because of forced migrations, anti-Semitic “pogroms”, and voluntary movement to evade prevailing social conditions, and preeminently, death or misplacement in the Holocaust. All of these scenarios are true for a group of Jewish families, who all share an extremely rare surname, Korenbaum, and have an oral history of emanating from around Bug River Poland (modern-day Belarus). What is most intriguing about the Ashkenazi surnames is that they originated from the late 18th century to the early 19th century when Jews were forced to take on surnames for administrative purposes in the European kingdoms in which they resided. Based on genealogical records and family oral history, the earliest Korenbaum ancestor, Chaim Korenbaum, was born in 1784 in the former Polish Kingdom. Given the time period in which he lived, he may in fact be the patriarch of the Korenbaum surname. Also since this surname is quite rare, it is believed that all Korenbaums in the world today living in the United States, Israel, France, Russia, Germany, England and other countries trace their ancestry to this man. Each of these families has dispersed across the world for various reasons but all have an oral history of an origin around the border of modern-day Poland/Belarus.

Here we applied Y-chromosome lineage analysis using four Ychromosome biallelic markers and twelve Y-short-tandem repeat (STRs) markers to support or refute the claim that these three paternal lineages from different parts of the world today share a common paternal ancestor. The Y-chromosome is an ideal haploid marker since markers from the male specific region of the Y do not recombine with the X, and therefore are retained along an unbroken male lineage for many generations [1]. Using Y-chromosome biallelic markers allows for determination of genetic clades or haplogroups, while the Y-STRs provide further resolution into distinctive haplotypes for greater individualization than can be provided solely by biallelic marker typing. Previous reports have demonstrated the utility of Ychromosome analysis to reveal whether certain European surnames have common founders [2]. Also Y-chromosome analyses have been applied to examine unusual European genealogies [3] and to investigate the origins of historical surnames [4]. Additionally, Ychromosome studies on Jewish populations have revealed their paternal lineages to be predominately of Middle-Eastern origin [5-8]. In particular, Jewish priestly surnames were shown to have common founders [5,6,8,9].

A total of 5 males with Korenbaum or derivative surnames participated voluntarily for this study. 3 men (A2, A3 and B3) were sampled while attending a family-organized reunion in Smithfield, Rhode Island and another 2 (C2 and C3) living in Munich Germany were sent sterile swabs in the mail with swabbing instructions and a return envelope. The authors had access to these samples as they were invited guests of this reunion and voluntarily gave assistance in confirming relationships between distant Korenbaum families. Samples were collected by scraping the cheeks of participants with Puritan® (Hardwood Products, Guilford, ME) brand sterile swabs. DNA extractions were performed from the swabs using the BuccalAmp™ (Epicentre, Madison, WI) DNA Extraction kit according to the manufacturer’s specifications.

The total DNA extract from all samples was diluted in sterile water 1:10 before performing PCR using Platinum Taq Polymerase kit (Invitrogen, Carlsbad, CA). Amplification of YAP, M35, M78 and M81 Y-biallelic markers was performed using primers from Underhill et al. [10]. After amplification of all Korenbaum samples plus controls, YAP was typed by DNA gel electrophoresis; while M35, M123, and M81 were determined by direct DNA sequencing across the SNP site with the same primers used in amplification. The controls were three DNA samples of known Y-DNA profiles belonging to haplogroups E-PN1, E-M81 and R-M207 and water negative controls that were run in parallel with Korenbaum samples to ensure quality control and exclude DNA contamination. Haplogroup nomenclature was based on the 2015 ISOGG (International Society of Genetic Genealogy) Y-DNA Tree. In order to sequence the PCR product, fragments were first purified using QIAquick PCR purification kit (Qiagen, Hilden, Germany) and then cycle sequenced in the forward and reverse directions using the same PCR primers with the BigDye Terminator V1.1 chemistry kit (Applied Biosystems (ABI), Foster City, CA). After cycle sequencing, samples were ethanol precipitated and nucleotide sequences were determined in an ABI PRISM 377 DNA Sequencer. Editing and alignment of the sequences was performed using Sequencher 4.7 Forensic

Genealogical research has thus far been unable to connect several distant branches, including a branch living in Germany whose patriarch emanated from Miedzyrzec Poland. A diagram showing the proposed genealogy of three Korenbaum branches is illustrated in Figure 1. In this report, we examined Y-DNA from individuals from this distant branch in Germany (Lineage C), where C2 and C3 have a father-son relationship. We also examined two other branches (Lineages A and B) with a confirmed common ancestor born in 1867. Both of these branches have descendants who reside in the United States today. Individuals A3 and B3 in these branches are second cousins. Furthermore, the two latter branches present a purported genealogy tracing them back to the Korenbaum patriarch Chaim Korenbaum born in the late 18th century. Because of significant gaps in relevant genealogical records, it could not be determined whether these distant branches belong to the same paternal lineage with any high degree of certainty. 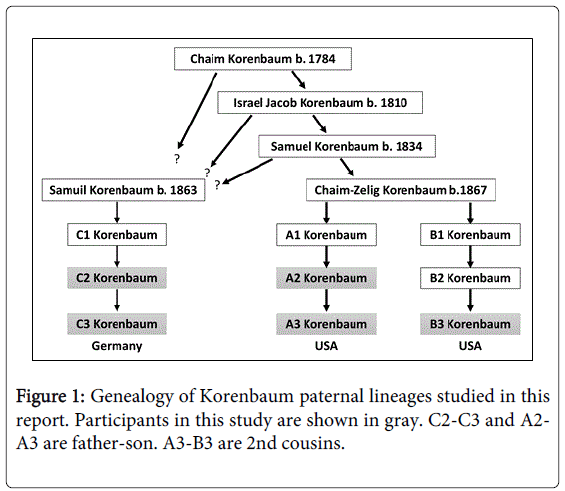 Figure 1: Genealogy of Korenbaum paternal lineages studied in this report. Participants in this study are shown in gray. C2-C3 and A2- A3 are father-son. A3-B3 are 2nd cousins.

All male members with a Korenbaum-derived surname were tested and Y haplotype determined. It was initially determined that all Korenbaum members were positive for YAP presence which placed them into haplogroup DE. Therefore using a hierarchical strategy we typed downstream biallelic markers M35, M123 and M81 (Figure 2) [11]. All members were found to belong to the Y haplogroup E1b1b1b2a based on the presence of the 161 G→A SNP that defines M123 (Table 1). This haplogroup is prevalent in the regions of modern Jordan and Saudi Arabia as well as Albania [12]. A previous study on the Jewish population showed that 8.8% of members of the Cohen and Israelite Jewish castes possessed this haplogroup [8]. This haplogroup is thought to have originated in the Near East regions and spread to North Africa and Europe [11]. Schematic displays the hierarchy of the Y-SNP markers typed in this study. The strategy for hierarchical genotyping allows the Furthermore, all members also shared the same Y-haplotype as defined by 12 Y-STRs (Table 2). These data indicate that all five male members belong to the same paternal lineage and may likely share a common male ancestor five to seven generations ago. The Y-DNA data also supports the hypothesis that these lineages all descend from Chaim Korenbaum born in the late 18th century adding to the connections they already had with surname and oral history.

DYS389II, DYS390, DYS391, DYS392, DYS393, and DYS385a/b), there were still no matches to European haplotypes (0 of 45286 [f =0 (95% CI: 0-8.145 × 10-5)]) or any other populations in the database. This indicates that extending to a larger array of markers may not be necessary to determine inclusion or exclusion of individuals from the Korenbaum paternal lineage. In a study by King et al., British individuals with the same surname carrying a rare African haplotype were able to trace their genealogy to a common ancestor the late 18th century, while having at most only a one or two step difference in their Y-STR haplotype from each other out of 17 Y-STRs. When they extended their analysis to 77 Y-STRs they only found one marker with an additional repeat in a single individual [3]. Given the similar time frame (late 18th century founder), fewer or no other differences might be discovered among the Korenbaum lineages if a larger set of Y-STRs is used.

We conclude that Y-chromosome lineage analysis is a powerful tool in lineage confirmations of displaced people. However, its usefulness is greatly diminished if not used in conjunction with other investigative tools such as genealogical records. Further work using a larger array of Y-STRs that might generate a better estimation for calculating the Time to the Most Recent Common Ancestor (TMRCA) for paternal lineage in this study, if additional differences in Y-STR markers were to be discovered [13]. Nonetheless, if other Korenbaum related male members from other branches of the family are located and are willing to be tested, it would also improve the ability to estimate that common link.

We would like to thank all of the participants for making this study possible.