Copyright: © 2017 Samanta PK. This is an open-access article distributed under the terms of the Creative Commons Attribution License, which permits unrestricted use, distribution, and reproduction in any medium, provided the original author and source are credited.

Metal oxide semiconductor nanostructures are of keen interest to the researchers as they exhibit multifunctional properties compared to their bulk counterpart. Amongst several metal-oxide nanostructures zinc oxide is very popular because of its unique optoelctronic properties which are of wide importance in the field of nano-optoelectronic devices. Moreover, it also exhibit antibacterial activity which is very important in the field of medical science. This article briefly summarizes the wet chemical growth and anti-bacterial activity of several ZnO nanostructures with a view to provide the reader an overall feature of ZnO nanostructures.

Semiconducting metal oxide nanostructures are in the forefront of research due to their versatile properties exhibited in the nanoscale regime. Zinc oxide (ZnO) is a very well-known inorganic II-VI semiconductor with high direct band gap ~3.4 eV and large excitonic binding energy of 60 meV at room temperature [1]. This high value of band gap makes ZnO a potential material for fabricating ZnO based UV laser [2]. ZnO has non-centro-symmetric structure and thus it possesses piezoelectric property. This is very useful in harvesting electrical energy from mechanical vibration [3]. Due to high band gap, UV emission is the characteristic emission of ZnO. However, during crystal growth several defect states (zinc and oxygen vacancies, zinc interstitials) are created which produces shallow energy levels within the valence band and conduction band of ZnO. Transition of carriers from these lower band gap energy states leads to visible emission from ZnO. Several researchers have reported blue, green, blue-green and violet photoluminescence from ZnO nanostructures due to specific type of defect states [4-10]. ZnO also exhibit ferromagnetism at room temperature [11]. This ferromagnetic and optoelectronic properties together makes ZnO a potential material in spintronic applications [12]. Nanoparticles are recently being used in bio-sensors, nanomedicine and also being used in clinical therapy [13-15]. Green synthesized ZnO NPs are found to be nontoxic to blood plasma and thus found potential element of nanoparticle based drug delivery. Gold, silver, TiO2, ZnO, CuO are found to exhibit antibacterial activity against various bacteria [16-18]. This antibacterial activity owes to the high surface to volume ratio of the nanoparticles and their specific charge transfer interaction mechanism with the bacterial cells. To understand the detailed mechanism of antibacterial activity of ZnO nanoparticles, thorough investigations have been reported in the existing literature. Recently, it has been reported that ZnO nanoparticles also exhibit negative activity against some bacteria [19-24]. Here in this mini review article I shall discuss the chemical growth of ZnO nanostructures and their antibacterial activity.

The unit cell of ZnO is wurtzite (Figure 1) having a = 3.296 Å, c = 5.2065Å with space group C 46v [22]. However these lattice parameters may change due to lattice strain, and doping [23]. In the Wurtzite structure, Zn2+ and O2- ions are stacked alternately along the c-axis. The top surface is terminated with Zn2+ ions while the bottom face is terminated with O2- ions. These two planes are basal polar planes. The growth rates of different planes are different and follow the following order:

This difference in growth rate together with the free energy of the systems leads to the variation in morphology of ZnO nanostructures [24]. 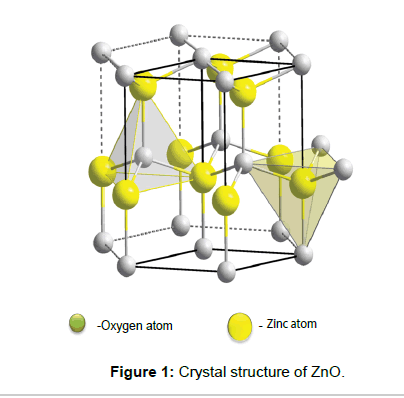 In chemical method the reaction can takes place either in aquatic media or in alcoholic media. Several soluble zinc salts and sodium hydroxide or potassium hydroxide are used in this process. Sometimes some additives are used to control the growth process. The nanostructures can be grown both template assisted and template free.

Nanorods and nanopencils-like morphological structures are very commonly exhibited by ZnO. These types of ZnO nanostructures can be grown very easily by chemical method. Growth of ZnO nanorods onto Si and ZnO thin film has been reported by Vayssieres [32] by controlled hydrolysis of Zn(NO3)2. They used no surfactant and the growth occurred at a moderate temperature. Similar type ZnO nanorods are also reported by many researchers by hydrolysis of Zn(NO3)2 (Figure 2) [33]. However, the growth time, temperature and surfactant plays important role in determining the morphology of the grown ZnO nanostructures. By selective capping of the various facets of ZnO crystals it is possible to grow unidirectional growth of ZnO [34,35]. By varying the growth temperature and the growth duration the structure changes from nanorods, to monopods, bipods and nanoprism-like structures (Figure 3) [36]. The pH of the solution is a key control factor of the growth rate of ZnO. Usually in basic media, due to the availability of more OHions, the growth rate of ZnO crystals is enhanced [37]. The reaction mechanism of nitrate based growth of ZnO is as follows:

Hollow tubular ZnO is also reported by few researchers [38,39]. However this type of morphology is not very commonly observed. This tubular structure can be formed by dissolution of the atoms from the core of nanorods [40]. Thus control of the dissolution rate is very much important in fabricating tubular ZnO. This includes the precise control of the reaction time, precursor concentration and growth temperature.

Another most interesting morphology exhibited by ZnO is nanobelts. Hydrothermal growth of ZnO nanobelts using sulphate salts in ethanolic media at 160ºC is reported by Zhang et al. [41]. Similar type of belt-like structure is also reported by Xi et al. in the reaction of zinc nitrate and NaOH in presence of EDA and ethanol [42]. Zinc acetate based ZnO nanobelts is reported by Samanta et al. [43] without using any surfactant. ZnO nanocrystals are polar in nature and the opposite charges reside on opposite sides of the crystal [44]. Thus the polar surfaces of ZnO can be treated as a charged parallel plate capacitor and possess additional electrostatic energy. So to reduce this surface energy it reconstructs in the following ways: (a) the nanobelts roll-over, (b) they form the spiral shape like DNA or (c) they can stack one upon another to reduce the surface charges. This leads to the stable structure of ZnO.

ZnO nanoparticles (NPs) and quantum dots (QDs) are very commonly observed in ZnO family. In QDs structure, the carriers are confined in a very small region. Thus the density of states and the energy bands are drastically modified. This leads ZnO NPs and QDs a potential material for nanoelectronic and spintronic memory devices. Dutta et al. [45] have reported the synthesis of ZnO QDs from zinc acetate in methanolic media. However if the reaction is performed in aquatic media then a layer of Zn(OH)2 is grown over the ZnO QDs. By varying the concentration of the nitrate ions, the sizes of the ZnO QDs was tuned from 13 nm to 30 nm. Wet chemical synthesis of ZnO NPs is also reported in the literature widely [46-50]. Figure 2: ZnO (a) Nanorods and (b) Nanopencils.

The American Heritage Medical Dictionary 2007, defines antibacterial activity as the action by the external agent (drugs/foreign molecules) on the bacterial cell due to which the cell growth of bacteria is constrained. It is very important that the external drugs/foreign molecules used for the antibacterial activity must not affect the healthy cells of the body. Also the drugs must not be toxic. In gram-negative bacteria the cell wall is bi-layer type: the outer membrane is a thick while the inner one is a thin (~7-8 nm) plasma membrane of peptidoglycan [51]. However the cell wall of Gram-positive bacteria consists of a thick (~50 nm) peptidoglycan multilayer [51]. Within the cell wall the fluid (cytoplasm) content have several complexes of cellulose with 80% water and soluble ions, salts and nucleic acids. Due to the presence of these ions, the effective charge of the bacteria is usually negative. Cytoplasm controls the production of replica cells- its growth and metabolism and electrical conductivity of the cell. Nanoparticles of particle size ~50 nm can be used to penetrate the cell wall, thus penetrate the cell and affect the conductivity of the cytoplasm of the bacteria. This results in the destruction of the bacterial cell. Several methods like disk diffusion technique, broth dilution and agar dilution technique, conductometric assay measurement technique have been reported in the literature to investigate the anti-bacterial activity of nanoparticles.

The author sincerely acknowledges UGC-DAE-CSR Kolkata centre for financial support with Grant No. UGC-DAE-CSR-KC/CRS/13/RC12/0983 dated 16.12.2013 for carry out this research work.