Rise in Galactic Cosmic Ray before Thunderstorm in Delhi

On 30th May 2014 a sudden thunderstorm in Delhi, India was unprecedented. The blow of the wind was at the rate of 92 -100 Km per hour, which has claimed 23 human lives, thousands of trees were uprooted and several buildings were collapsed. Routine weather prediction of different agencies could not able to predict this catastrophe (Figure 1). 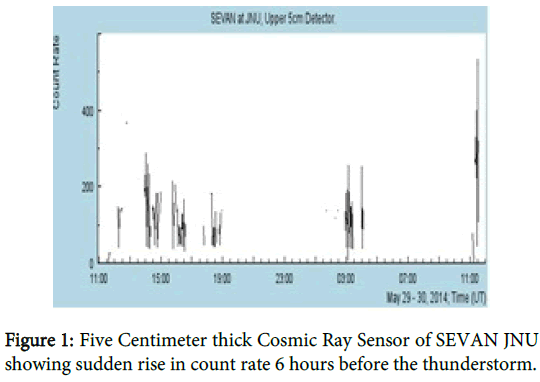 The SEVAN detector has several sets of scintillators to record the incoming cosmic rays of different origin. The topmost 5 cm thick scintillators can record the galactic cosmic rays while the middle unit of 20 cm thickness is capable of recording the cosmic rays from the Sun. It has been recorded that 6 hours before the thunderstorm in Delhi the topmost unit of SEVAN has detected a sharp rise in cosmic rays while the middle unit of same device has recorded a low cosmic ray intensity than the normal. The pressure sensor of SEVAN has shown sympathetic rise with the 5 cm cosmic ray sensor (Figure 2). 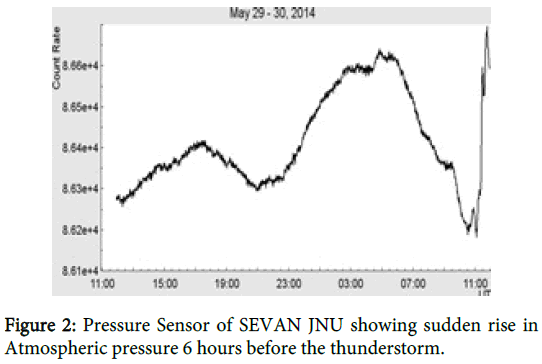 Similar SEVAN units are functioning in other parts of the world which has also shown the similar phenomena of the selective rise and fall of cosmic rays from different sources before the thunderstorm [1-4].

Here I propose a new hypothesis for the prediction of thunderstorm 6 to 8 hours in advance. Continuous monitoring of the cosmic ray from different sources and its Relative abundance has the potential to understand the character of the thunderstorms. Human lives and properties of different parts of the world can be saved if it is known in advance (Figure 3). 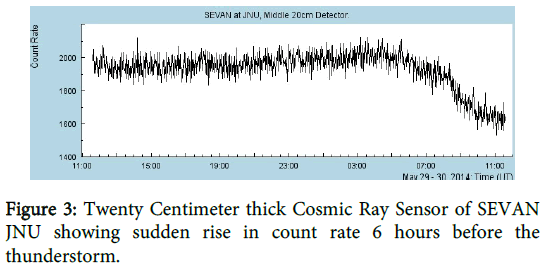