Copyright: © 2015 Golini J. This is an open-access article distributed under the terms of the Creative Commons Attribution License, which permits unrestricted use, distribution, and reproduction in any medium, provided the original author and source are credited.

Background: Testosterone therapy is commonly used by individuals dealing with testosterone deficiency (TD). TD affects older men and athletes with a history of anabolic steroid use. In this study a novel nutraceutical product, Taxadrol, was tested in rodents and human subjects to assess toxicity and activity as a testosterone therapy.

Materials: Taxadrol, consisting of a proprietary mixture of natural products, was tested for toxicity and efficacy in rodents and humans.

Results: Rodents examined at 10, 17, 24 and 7 days post withdrawal of Taxadrol were found to have increases in free and total testosterone compared to control animals when given 4 and 8 mg/kg doses. An average of 180% improvement in testosterone levels were also noted in two human subjects who ingested a 30 mg per day dose of Taxadrol.

Conclusion: Increases in free and total testosterone were noted in rodent models with no signs of toxicity. Taxadrol was additionally shown to effectively raise testosterone levels in two male athletes with no major side effects.

Other options include agents such as clomiphene citrate and anastrozole, or gonadotropins replacement (hCG and hMG purified from female samples), both of which increase FSH and LH levels to stimulate production of testosterone in leydig cells as well as restoring spermatogenesis [4,5]. The main benefit of this therapy is that it also restores fertility, so individuals worried about having children increase their ability to do so [4]. Unfortunately, not every patient will recover normal testosterone with these therapies, which are intended as fertility treatments. Alternative therapies include “compound gels” made by pharmacies mixing testosterone with hand cream or lotion. Natural supplements containing subtheraputic levels of Viagra or dehydroepiandrosterone have been suggested to increase levels of testosterone, but they are not FDA regulated [4].

A novel proprietary nutraceutical mixture, Taxadrol, is considered that may act as an alternative to traditional hormone therapy in the treatment of TD. Preliminary studies in rodents and humans aimed at establishing toxicity and activity profile of this mixture are presented. Both the rodent model and human subjects experienced increases in testosterone after Taxadrol usage suggesting a potential utility in testosterone therapy.

Taxadrol consists of a unique proprietary mix of common Montana yew extract (Taxus baccata) tips, needles, bark, and branches, extracts of African yohimbe (Pausinystalia johimbe) bark and branches, and northwestern USA sarsaparilla (Smilax regelii) bark and branches. The extraction process incorporates a new advanced proprietary extraction/ isolation method developed by All American Pharmaceutical. Once the extraction and isolation process is finished, the material is then stabilized into an aqueous delivery system and administered at 30 mg doses.

Animal experiments were carried out in accordance to the requirements of the European Convention for Protection of Vertebrate Animals used for Experimental and other Specific Purposes (1991). Six Wistar rats were given an oral dose of Taxadrol at 4 mg/ kg, 20 mg/kg, or none in addition to a normal diet. Each rat was fed the same type of food and provided free access to water.

Week 1- Weigh in of new rats and stabilization.

Week 2-5: Rats were weighed each morning and feed a normal chow diet along with the appropriate dose of Taxadrol. Observations were performed at 8:00 A.M., 12:00 P.M., 4:00 P.M. for sluggishness, bleeding, sores, tumors, alertness and skin temperature.

Week 6: Rats were examined for toxicity.

In follow-up, 160 healthy, pathogen free male Wistar rats were housed in a controlled environment: temperature 20-22ºС, free access to food and water as described above. The animals were randomly distributed in sixteen treatment groups consisted of 10 animals, as shown in Table 1. The oral treatment was carried out using a gastric tube. The animals were treated over 10, 17, or 24 days, and sacrificed accordingly. Groups 8, 12 and 16 were sacrificed 7 days after the last treatment (together with control group 4) in order to assess the reversibility of the investigated pharmacological activity.

An acute toxicity study was performed to assess the short-term toxicity of Taxadrol in white male Wistar rats when administered an oral dose equivalent to a standard recommended human dose and at 5 times the recommended dose. The study was intended to provide information on the potential health hazards of the test article with respect to oral exposure. In this test, one group of 6 rats received Taxadrol at 4 mg/kg, a second group of 6 rats received Taxadrol at 20 mg/kg and the third group of 6 rats was used as a control. At the end of 6 weeks the rats of all groups presented with no visible toxicity as represented by examinations of body mass, sluggishness, bleeding, sores, tumors, alertness and skin temperature.

In a more extensive follow-up study, 160 Wistar rats were tested using a similar dosing schedule and sacrificed at various time frames to establish more extensive potential toxicological effect, effect on testosterone, and reversibility of Taxadrol’s effects (Table 1). The results from the investigation are given in Tables 2 and 3 and in Figures 1 and 2. Changes in the testosterone levels, after exposure to Taxadrol allowed for some conclusions regarding the clastogenic effect in rats.

Each data point represents the arithmetic mean of values for 10 experimental animals; * p<0.05 vs. the untreated
Control (Students t-test); N.S. not significant vs. the untreated control (p>0.05).

Each data point represents the arithmetic mean of values for 10 experimental animals; *p<0.05 vs. the untreated
Control (Students t-test); N.S.not significant vs. the untreated control (p>0.05). 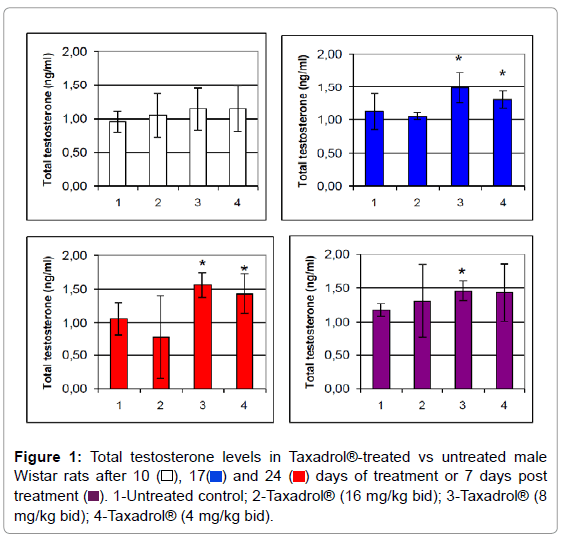 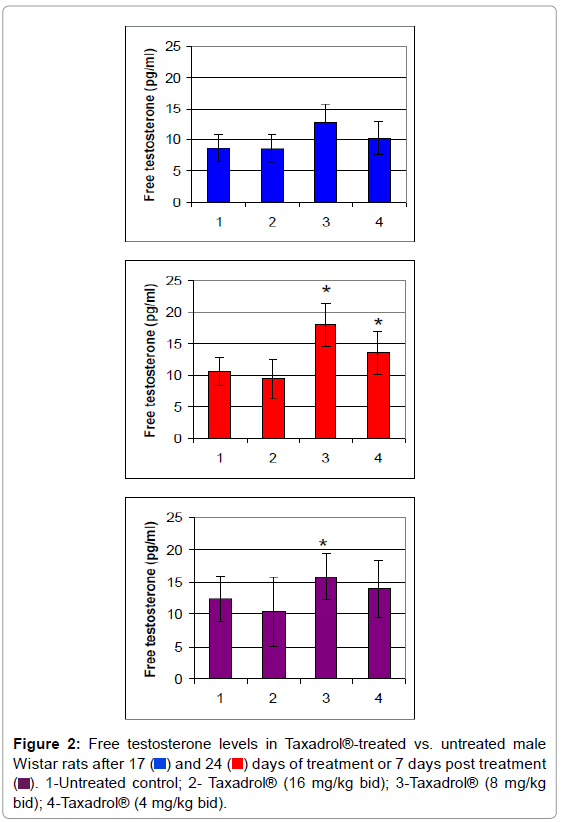 Animals were sacrificed and blood samples were collected via cardiac puncture, in which the serum fractions were isolated. The determination of testosterone levels was carried out in the Higher Institute of Veterinary Medicine (Sofia, Bulgaria), using commercially available kits. The blood samples from the animals sacrificed on the 10th day of the treatment period were assayed for total testosterone levels, whereas in all other treatment groups and controls the levels of both total and free testosterone were determined. After ten days, slightly elevated levels of total testosterone were observed which trended toward significance. After 17 days of treatment a prominent statistically significant change in total testosterone was observed in the 4 and 8 mg/kg groups. However, only the 8 mg/kg dosing model was statistically increased in free testosterone. At the end of the treatment period (24 days) these doses (4 and 8 mg/kg) again proved to cause efficient increase in the total and free testosterone content, whereas the highest dose (16 mg/kg) caused some decrease of the hormone concentration (though below significance).

In addition, the established effects were sustained. Measured testosterone levels 7 days after the treatment cessation were increased in animals treated at a dose of 8 mg/kg/twice daily in both free and total testosterone concentrations vs. the control group.

Throughout the study period there was neither mortality nor alteration in the feeding behavior of treated animals as compared to the untreated controls. After collecting the blood samples the carcasses were necropsied by a qualified vet surgeon, and the visceral organs (liver, spleen, stomach, intestines) were examined for signs of toxicity. Moreover the animal body mass was monitored on regular basis as a non-specific marker of general toxicity. The post mortem examination of the visceral organs failed to reveal any signs of toxic deleterious effects in the treatment groups, as compared to the controls. Moreover the exposure of animals to Taxadrol caused no alterations in the weight gain rates of treated vs. untreated animals. Together these findings indicate that Taxadrol leads to a modest increase in testosterone levels in rodents and is devoid of general toxic effects.

Two bodybuilders with low testosterone were chosen. Subjects were screened to make sure testosterone levels were low, that they were healthy and had not taken anabolic steroids. A questionnaire established the absence of anabolic steroids for a period of at least 4 years. Both men were over 40 years of age and were willing to go off all other supplements. Their workouts consisted of moderate training 5 days per week with cardio three days per week. No changes were made to their training schedule or diet.

Both subjects experienced increases in testosterone levels (Table 4). Both men improved in training intensity and strength. Increases in body weight and a noticeable decrease in body fat were reported. They further reported an increase in libido. No side effects were reported but a slight increase in aggressiveness, commonly seen with increased testosterone [8]. Serum Albumin and C-Reactive Protein was tested, as non-specific indicators of adverse events and inflammation [9], and found to be in a normal range with little to no change post Taxadrol exposure.

Prior to human studies, rat studies were performed to assess activity and toxicity. All rats examined remained active and showed no signs of sluggishness, bleeding, sores or tumors. All rats remained very alert and attentive during the study. No mortality occurred during the study. No clinical abnormalities were observed during the study. Body weight gain was noted for all animals during the test period. No significant gross internal or external findings were observed during the examination of the animals. The final examination also concluded that there were no microscopic lesions caused by the test article. Under the conditions of this test, all animals survived; therefore the oral toxicity must be 5X greater than the maximum administered human dose. Furthermore, convincing statistical evidence supports the finding that at recommended human doses, Taxadrol increases both total and free testosterone in rodents.

Following these trials, Taxadrol was shown to effectively raise testosterone levels in two male athletes by an average of 180% with no major side effects. The athletes saw an increase in body mass with a reduction of body fat. They indicated additional qualitative improvements to training intensity but an increase in aggressiveness, also seen with traditional testosterone therapies [8]. In a second trial, Taxadrol raised a retired male athlete’s testosterone levels dramatically over traditional hormone therapy. Although these trials are limited in scale they suggest that the efficacy of Taxadrol in humans is similar to that described in rodent models and suggests further study of this non-traditional therapeutic in correcting lowered testosterone in athletic males.

Despite these preliminary proof of principle results. Further analysis of the agent’s efficacy and toxicological profile are required in humans. Specifically, a much larger cohort is required for statistical objectivity. Furthermore, examination of cardiovascular and liver markers commonly used as indicators of toxicity in testosterone therapy were not conducted. However, together with the rodent data, these preliminary findings are suggestive that this therapy might be used without overt toxic effects to participants.