Copyright: © 2012 Kaneko F, et al. This is an open-access article distributed under the terms of the Creative Commons Attribution License, which permits unrestricted use, distribution, and reproduction in any medium, provided the original author and source are credited.

Patients with Behcet’s disease (BD) have hypersensitivity against oral streptococci increased in their oral cavity. Heat shock protein-65/60 (Hsp-65/60) derived from S. sanguinis and the damaged mammalian tissues, respectively, are supposed to play an important role in BD pathogenesis. The antigen presenting cells taken Hsp-65 via Toll-like receptors in the oral lesion are carried to the local lesions by blood flow and they are known to lead T cells undergo apoptosis in the regional delayed type hypersensitive reaction. The human Hsp-60 peptide (336-351 aa) combined with recombinant cholera toxin B subunit was reported to be a therapeutic agent for BD patients with advanced uveitis.   Here, we recognized that the peptide (249-264 aa; designated LO1 and 311-326aa: UK) of Hsp-65/60 exhibiting highly homologous to the T cell-epitope lead CD4+ and CD8+ T cell apoptosis in peripheral blood mononuclear cells from BD patients. In BD patients IL-8 and IL-12 production from activated T cells was significantly inhibited by LO1 and UK peptides. The results suggest that the peptides of Hsp-65/60 are able to be therapeutic agents for active BD patients.

Behcet’s disease (BD) is a chronic inflammatory disorder characterized by starting with oral ulceration and develops the recurrent involvement of muco-cutaneous, ocular, vascular, digestive and/or nervous system organs. BD symptoms are considered to be based on the correlation between the genetic intrinsic factor and the triggering extrinsic factors, because more than 60% of BD patients are associated with HLA-B51 [1,2]. As one of the triggering extrinsic factors, the oral unhygienic condition may be suspected, because periodontitis, decayed teeth, chronic tonsillitis, etc. are frequently noted in the oral cavity of BD patients [3,4]. The proportion of Streptococcus sanguinis (S. sanguinis ), S. mitis and S. mutans was pointed to significantly increase in the oral bacteria flora of BD patients [5-8]. S. sanguinis was previously recognized as species of the genus Streptococcus named “S. sanguis” and the strain isolated from BD patients was different from reference ATCC strains in DNA homology and sugar constituents, which indicate uncommon serotype KTH-1 (so-called BD113-20 strain) [6-8]. Most of the patients tend to acquire delayed type hypersensitivity (DTH) against oral streptococci [3,4,9-11]. The serum-antibody titers against streptococci were also elevated in BD patients [12]. Our previous trials of the prick reaction by self-saliva revealed that BD patients can respond to their own saliva including oral streptococci. The phenomena can be used for diagnosis of BD and recurrent aphthosis and may explain the correlation between oral ulcerations and the systemic involvement in BD [13-15,18].

The 65kDaheat shock protein (Hsp-65) related to S. sanguinis can be detected along with a counterpart human Hsp-60 which might reactively appear in the sera and skin lesions of BD patients [15-18]. The lesions are histologically considered to be DTH reaction with perivascular mononuclear cell infiltration [10,19,20]. Generally interleukin (IL)-12 and IL-23 produced by the infiltrated mononuclear cells, which might be antigen presenting cells (APCs), is thought to induce naive T (Th0) cells to T-helper type-1 (Th-1) cells in correlation with DTH reaction [21].

It is of interest that the synthetic peptide of Hsp-60 (336-351 aa) fused with recombinant cholera toxin B subunit (rCTB) reduced the experimental uveitis induced by the whole Hsp-60 in Lewis strain rats, although the adjuvant-free peptide is also capable of inducing uveitis [22,23]. A therapeutic trial with the selective peptides conjugated with rCTB was done by oral administration for BD patients with severe uveitis. In those patients whose disease is inactive, a lack of the peptidereactive CD4+T cell population and reduction of cytokine production from T cells were found. The Hsps might thus trigger both innate and adaptive immune mechanisms in BD, but on the other hand, the therapeutic approaches involving Hsp immunomodulation may be available as “oral toleration” for BD patients with advanced uveitis using the restricted peptide of Hsp (336-351) [24]. The four distinct peptides encoding Hsp-65, which have homology to Hsp-60 and T cell epitope, were shown to significantly stimulate and undergo CD4+ and CD8+ T cell apoptosis in peripheral blood mononuclear cells (PBMCs) from BD patients [17,25]. Then, we studied to confirm the mechanism of the peptides of Hsp-65/60 to the PBMCs of BD patients.

We analyzed Hsp-65 derived from S. sanguinis to find the correlation with the homologous peptides to Hsp-60 and T cell epitope of BD patients (Figure 1) and prepared the 6 synthetic peptides for incubation with PBMCs from BD patients and healthy individuals (HIs) to find how the peptides behave the cytokine production form PBMCs of BD patients in active disease stage. The patients were 2 females aged 26 and 36 years and 5 males aged from 23 to 55 years (average 39.1 years old) who were mainly suffered from mucocutaneous symptoms including oral aphthous ulceration, erythema nodosum-like eruption, etc. since more than 5 years. All of them were treated with oral streroid ointment and occasional administration of minocycline and non-steroidal anti inflammatory drugs. HIs were 3 females aged from 28 to 31 (average 30.7 years old) and 4 males aged from 29 to 38 years (average 32.3 years old). 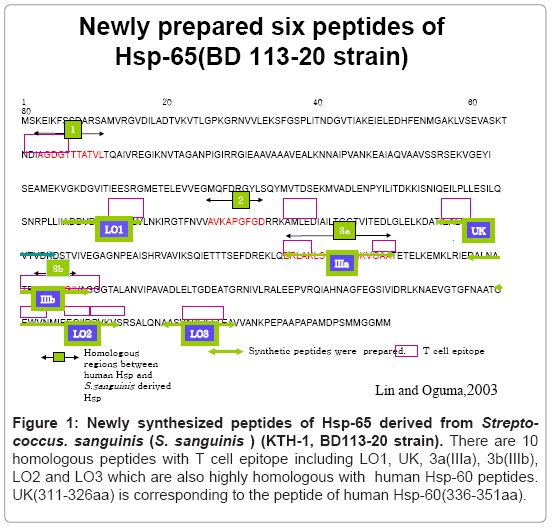 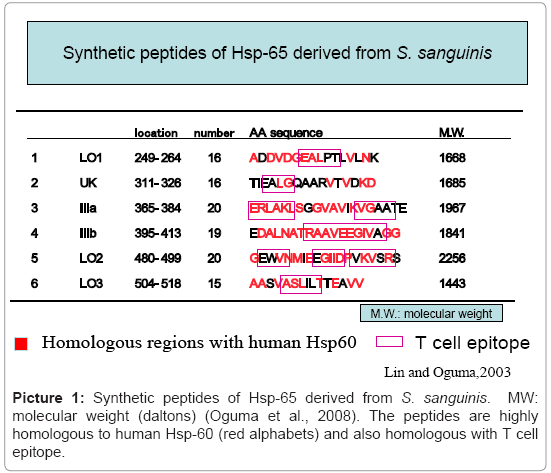 In order to learn the suppressive mechanisms of the proinflammatory cytokine production in PBMCs from active BD patients by the peptides of Hsp-65/60, we took LO1, LO2 and UK to find the reduction mechanism of IL-8 and IL-12. Using NOMO-1 cells (human macrophage cell line) and U937 (J-Global, Japan) stimulated by S. sanguinis antigen (5μg/ml) (BD 113-20 Ag) which produce IL-8, an attempt to add the peptites the cell incubation was done. The results showed that IL-8 production of the antigen-stimulated NOMO-1 cells were suppressed by incubation with LO1 and UK in a dose dependent manner, though the LO2 peptide failed to reduce the production (Figure 3). Also, we analyzed the stimulated NOMO-1 cells treated with or without the peptides to find cytokine gene expression using by GeneChip (Gene Chip; Human Genome, U133 Plas2.0 Array) and various expression of cytokine genes were observed (Picture 2). It is of interest that mRNA of CD58 (lymphocyte function-associated antigen-3; LFA-3) and FK506 (Taculolimus) binding protein (bp) was intensely increased on the cell membrane of the antigen-stimulated NOMO-1 when they were treated with LO1 and UK. It might be considered that antigen-activated T cells of BD patients underwent apoptosis by binding of LO1 and UK peptides on the cell surface receptor. 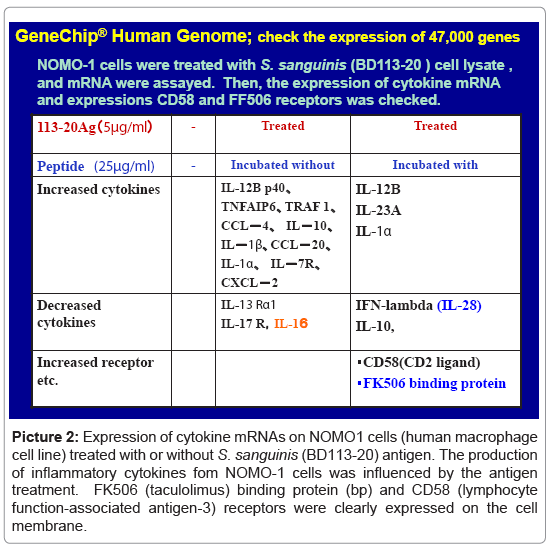 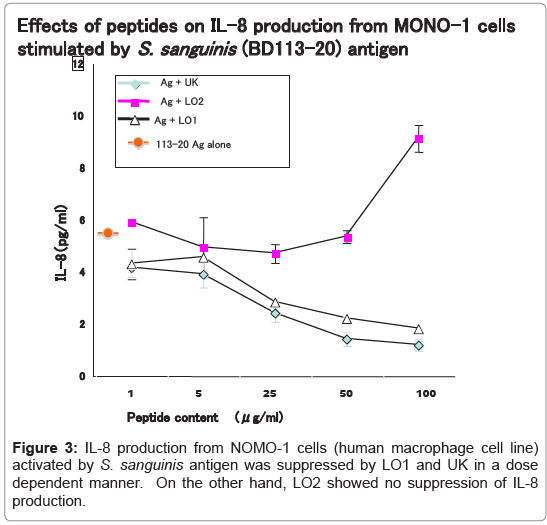 Figure 3: IL-8 production from NOMO-1 cells (human macrophage cell line) activated by S. sanguinis antigen was suppressed by LO1 and UK in a dose dependent manner. On the other hand, LO2 showed no suppression of IL-8 production.

Although the etiology of BD is still obscure, the clinical manifestations generally start with oral aphthous ulceration and develop systemic involvement. The close correlation between the genetic internal and triggering external factors is thought to be present in the BD pathogenesis. Most of BD patients tend to acquire hypersensitivity against streptococci in the oral cavity and express DTH reaction mediated by IL-12 and/or IL-23 in the various lesions [20,26]. Hsp-65/60, which is derived from oral screptococci and human damaged tissue, seems to play an important role in BD pathogenesis. The peptides of Hsp-65/60, which are homologous with T cell epitope, reduce the function of PBMCs from BD patients with active stage, though the Hsps stimulate the immune cells of HIs. It might be explained that when the APCs taken streptococcal agents via Toll-like receptors (TLRs) in the oral cavity were locally curried and adhered to the damaged vessel walls, the DTH response developed to the various clinical symptoms of BD patients , as previously shown [15,18]. Regarding TLRs to bacteria and their products in the innate immunity, TLR 2, 4, 6 and 9 are known to be expressed [28, 29] and it has been already reported that these TLRs are expressed at the reactive immune infiltrates in BD patients [30].

The probability of a new therapy for BD patients was described as the immune tolerance utilizing the peptides of Hsp-65/60. In order to know the effects of Hsp-65/60-peptides, the five peptides were applied on BD patients’ PBMCs activated, respectively. The results indicated that LO1 and UK peptides significantly reduced the production of IL-8 and IL-12 from activated PBMCs of BD patients. Also, to understand the reduction mechanism of cytokines from the PBMCs, the effects of LO1, LO2 and UK on NOMO-1 cells stimulated with S. sanguinis antigen were analyzed by a cDNA-microarray procedure. In the NOMO- 1 cells, mRNA expression of IL-16, IL-10 and IL-28-receptors was reduced though IL-12p40, IL23A and IL-1α were up-regulated. CD58 receptor and FK506 binding protein were enhanced by LO1 peptide, indicating the HSP65/60-peptides influence the cytokine production from NOMO-1 cells. The peptides may work to express FK506 bp and CD58 on the cell membrane of lymphoid cells from active BD patients as indicated that the behave of NOMO-cells might be considered as shown in (Figure 4). We tried to find the binding sites of the peptides on monocytes by cDNA microarray chips. The paneled cDNAs were obtained from NOMO-1 cells stimulated by S. sanguinis (BD113-20) antigen. From the results we speculated that CD58 molecule and/or FK506 binding protein were highly expressed on the cell surface of the NOMO-1 cells by the LO1 stimulation (Figure 4 and Picture 2) [27]. These results may indicate a new therapeutic strategy for BD patients as demonstrated before [31]. 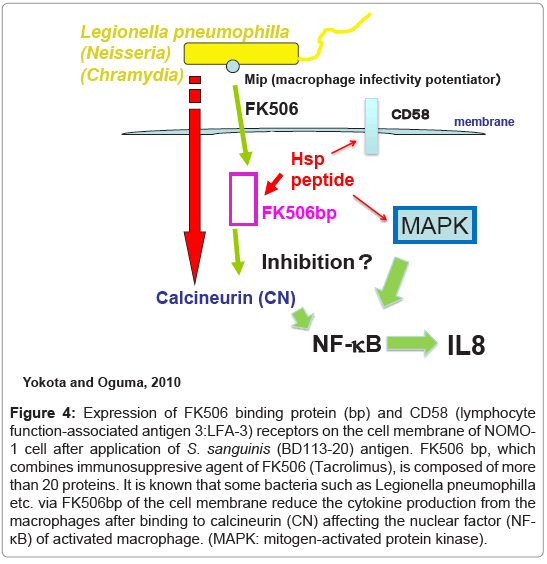 Figure 4: Expression of FK506 binding protein (bp) and CD58 (lymphocyte function-associated antigen 3:LFA-3) receptors on the cell membrane of NOMO- 1 cell after application of S. sanguinis (BD113-20) antigen. FK506 bp, which combines immunosuppresive agent of FK506 (Tacrolimus), is composed of more than 20 proteins. It is known that some bacteria such as Legionella pneumophilla etc. via FK506bp of the cell membrane reduce the cytokine production from the macrophages after binding to calcineurin (CN) affecting the nuclear factor (NF- κB) of activated macrophage. (MAPK: mitogen-activated protein kinase).

As one of the triggering external factors, streptococci including S. sanguinis increased in the oral cavity play an important role in BD patients. Especially, Hsp-65/60 derived from oral streptococci seems to cause various lesions of BD patients, but on the other hand, some peptides composed of the Hsp, which are homologous with T-cell epitope, are able to reduce proinflammatory cytokine production from immune reactive cells of active BD patients. These kind of the peptides may also be therapeutic agents for active BD patients, as previously reported [24].

We deeply appreciate the financial support from the Study Group of Behcet’s Disease (Director: Professor Yoshiaki Ishigatsubo, Department of Rheumatology, Yokohama City University School of Medicine) organized by the Japanese Ministry of Health, Labour and Welfare.