Copyright: © 2015 Al-Asmari ARK, et al. This is an open-access article distributed under the terms of the Creative Commons Attribution License, which permits unrestricted use, distribution, and reproduction in any medium, provided the original author and source are credited.

Light-dark cycle has an evident role in maintaining the circadian rhythm of complex living organisms. Disturbance of light-dark cycle has an effective role in distressing the normal functions of living organisms. In this study we have analyzed the behavioral changes and role of neurotransmitter in mice due to light-dark cycle disturbances. Batches of animals were exposed to continuous light and dark conditions for 1, 2, 3, 4 and 5 days. The physiological behavior analyses such as vertical, horizontal, ambulatory and response to light-dark exposures were recorded in the disturbed and control animals. Also the role of neurotransmitter such as Dopamine, 5-HT, 5-HIAA and Homovanillic acid were estimated in the disturbed and control animal nervous tissues such as cerebrum, cerebellum and brain stem. Based on the behavioral analysis it was found that continuous light exposures have increased the horizontal and ambulatory movement of mice more significantly than the continuous dark exposed animal upon comparison with normal 12-12 dark-light exposed animals. Also the continuous light exposed animals showed an aversion to light and liking to dark upon light-dark visit but the vice versa was not found with the dark exposed animals. Dopamines and 5-HT were found down regulated in both the light and dark exposed animals significantly when compared to the normally housed animals. The identified changes in behavioral and neurotransmitter level in mice due to light-dark disturbances are impacting the fact of association of stress, sleep and circadian rhythm in mice.

The behavior and physiology of most of the animals existing on the earth are reliant on the 24-hour cyclic clock called light-dark cycle (LD). Disturbance of LD cycle affects the normal functions of living organisms by disturbing their circadian rhythm. The inbuilt endogenous oscillators command the circadian rhythm such as blood pressure, heart rate, sleep-wake cycle, hormonal secretion and metabolism [1]. The central circadian clock of mammals is maintained by the suprachiasmatic nucleus (SCN) of the anterior hypothalamus [2,3]. Mammals have the most complex and well-formulated circadian rhythm centered with light-dark cycle and sleep. Mice, the nocturnal animal does most of its active work during the dark phase, which is in contrary to the diurnal animals, which does majority of the activity in light phase. Sleep is regulated by homeostatic interaction of circadian processes, which controls the duration and optimal time for sleep [4]. Similarly the behavioral rhythms of rats were found deregulated with arrhythmic behavior when their circadian rhythms were disturbed by short light-dark and continuous light-dark exposures [5]. From our earlier study it has been shown that disturbances to LD cycle by exposing to continuous light or dark conditions causes adverse effect on zebra fish by deregulating large number of genes and proteins [6].

It is well understood that neurotransmitter plays prominent role in maintenance of circadian cycle by exhibiting its function in SCN. Fluctuations in the level of neurotransmitter in rat were observed when they were exposed to disturbed light-dark cycles [7]. In this study we aimed to understand the effective role of disturbance of LD cycle in mice by exposing the animals to continuous light and dark conditions.

The behavior of the animals housed at standard, continuous light and continuous dark conditions were monitored for its horizontal movement, vertical movement, ambulatory movement and grooming using Animal activity meter (Opto-Varimex, USA). The animals were monitored for 2 minutes per activity after acclimatizing the animal in the activity meter in their respective light-dark conditions. The time and light-dark conditions for the measurement of activity were maintained same throughout the experiment. The dark condition experiments were performed under a dim red light, whose illumination does not have any role in disturbing the dark conditions. Obtained readings were tabulated for statistical analysis.

After behavioral analysis in their respective light-dark conditions the animals were sacrificed using cervical disc dislocation. Cerebrum, cerebellum and brain stem tissues were dissected carefully from the animals using stereoscopic microscope. The collected tissues were washed twice in PBS solution and frozen in liquid nitrogen. Analysis of Dopamine, 5-HT, 5HIAA and Homovanillic Acid neurotransmitters were performed on the collected brain tissue [8]. Brain tissues were weighed separately and homogenized using Teflon homogenizer in 0.1 M perchloric acid and 0.05% EDTA buffer for 10 seconds. The homogenate was centrifuged for 10 minutes and supernatant was carefully collected and filtered using 0.45 μm pore filters. High performance liquid chromatographic (HPLC) analysis for different neurotransmitters was performed on the supernatant in Waters HPLC-ECD (Model No. 2465, Waters Associate Inc. USA) system. The sample was HPLC analyzed using C18 μ-Bondapak Column with a 1.2 ml/ min flow rate and 10-μl-injection volume. The relative level of neurotransmitter was compared for Light and dark conditions against normal.

The data obtained from the behavior and neurotransmitter analysis were plotted and analyzed for its mean, SD and SEM using Microsoft Excel. The significance of the data were then calculated using PRISM software for One way ANOVA and post t-test, if overall value of p is more than 0.05 level of significance using Dunnett compare test data against control data.

All the experimental procedures executed in this work were performed as per the norms of the Institutional Animal care and Ethics committee, Prince Sultan Military Medical City, Riyadh, Saudi Arabia (Research Protocol No.17/2015). Figure 2: Response of mice to Light-dark exposures. The time spent by mice exposed to different light-dark conditions in dark/Light chamber were recorded and plotted against control animals (X-axis – Light or dark conditions; Y-axis – Time spent in seconds). The observation were reported as the mean + SEM. Data were represented as the mean ± SEM. **p<0.01 vs. control group (student t-test, n=3 per group).

Based on HPLC analysis it was found that the level of Dopamine and 5-HT (Serotonin) were significantly decreased in the cerebrum of mice brain. The down regulation of Dopamine and 5-HT were observed both in the light and dark stress conditions when compared against the control levels (Figure 3a). Similarly, a non-significant down regulation of 5-HIAA was observed in the cerebrum for both the lightdark disturbances (Figure 3a). The level of Homovanillic acid was not found altered for the stressors in the cerebral tissue. The level of 5-HT and 5-HIAA were not found significantly associated in the other nervous tissues like cerebellum and brain stem (Figure 3b and 3c). 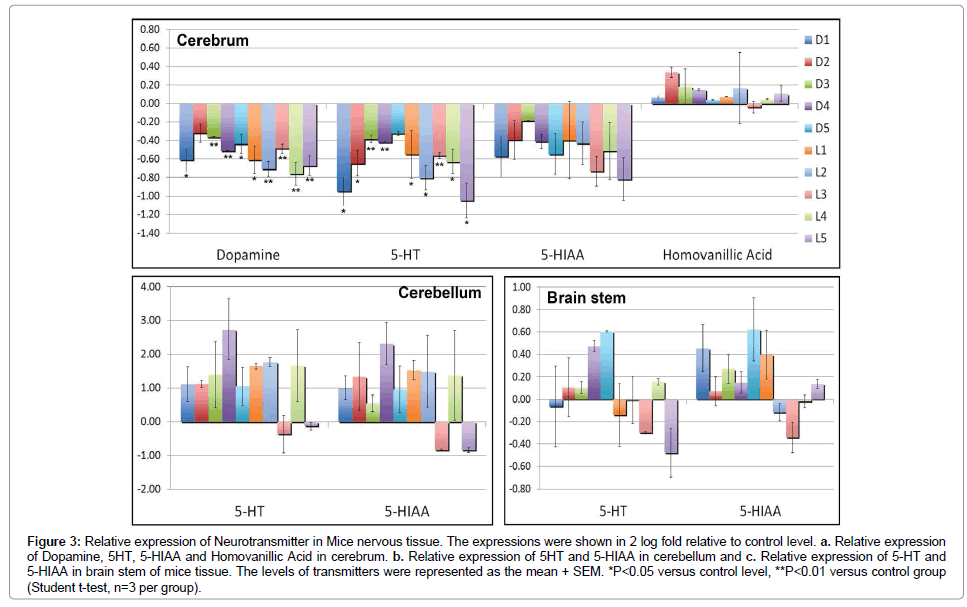 In spite of mice being a nocturnal animal it is very interesting to understand from this study that disturbance to light-dark cycle has a major role in disturbing their sleep-wake cycle and circadian rhythm. The associations of increased horizontal and ambulatory movement of the animal due to light exposures sway that the animals were totally stressed and were on constant movement due to disturbances. It is also well understood that constant light affects the locomotor activity in mice [9]. Light exposed animal’s aversion to light environment indicates that the animal is stressed with continuous light and is trying to avoid the same. But it is also interesting to observe that the dark exposed animals did not show aversion to the same environment in spite of its stress associated with continuous exposures. It is also very interesting to know that the level of neurotransmitters goes down in light and dark exposed animals, which confirms that the continuous exposure reduces dopamine and its metabolite in rodent nervous tissue [7,10]. Dopamine the reward-motivated neurotransmitter undergoes down regulation during stress condition in both light and dark exposures, revealing its direct association with sleep and stress. The observation also emphasizes its direct role in circadian cycle associated disturbances, as it was known that dopamine modulates diurnal and circadian rhythms in photoreceptor cells of mouse retina [11]. Serotonin, the other major neurotransmitter involved in cognitive functions was also found decreased in the disturbed cerebrum due to stress as it has been shown that serotonin has direct association with sleep as serotonin knockout mice exhibit more wakefulness [12]. This study has provided a new way of association of neurotransmitter along with varied movement behavior when mice were exposed to light and dark stress leading to disturbed circadian rhythm and sleep.