Role of Whole Body PET/CT in Establishing the Diagnosis of Neurosarcoidosis: Case Report

Copyright: © 2015 Lovett A, et al. This is an open-access article distributed under the terms of the Creative Commons Attribution License, which permits unrestricted use, distribution, and reproduction in any medium, provided the original author and source are credited.

Sarcoidosis is a multisystemic granulomatous disease of unknown etiology. Neurological symptoms occur in 5-15% of patients with sarcoidosis and are related to a whole spectrum of possible pathologies, including pachymeningitis, leptomeningitis, parenchymal involvement with mass lesions and/or white matter disease, myelitis, cranial neuropathies, peripheral neuropathy, and myopathy. Diagnosis can be challenging in patients without apparent intrathoracic involvement. We present a case of a patient with chronic leptomeningitis and resulting nonobstructive hydrocephalus in whom the presence of granulomatous inflammation was proven by the biopsy of fluorine-18-fluorodeoxyglucose (18F-FDG)-avid mediastinal lymph nodes detected on positron emission tomography/computed tomography (PET/CT). Prior computed tomography (CT) of the chest showed that they were normal in size. The patient was treated with glucocorticoids and infliximab, which resulted in clinical and radiographic improvement of the disease. This case argues for the important role of FDG-PET/CT in establishing the diagnosis of sarcoidosis.

Sarcoidosis is a systemic disease consisting of non-caseating granulomas most commonly affecting the hilar lymph nodes and lungs. Neurosarcoidosis occurs in 5-15% of patients with sarcoidosis [1-3]. In a retrospective study by Stern et al. of patients at the Sarcoid Clinic at Johns Hopkins, neurosarcoidosis was seen in 5% of patients with a diagnosis of systemic sarcoidosis, with 48% of these patients presenting with manifestations of the central nervous system (CNS) as their initial symptomatology [1]. 73% of these patients presented with cranial neuropathies, 18% presented with aseptic meningitis, and 9% presented with hydrocephalus [1]. Less common neurologic manifestations included parenchymal disease resulting in seizures and encephalopathy, peripheral neuropathy, and myopathy [1]. Retrospective chart review by Carlson et al. indicated that 62% of patients with neurosarcoidosis had coexistent systemic sarcoidosis (only 47% with a prior diagnosis of sarcoidosis), while the remainder were diagnosed with isolated neurosarcoidosis on their initial presentation [4]. The diagnosis of sarcoidosis requires compatible clinical and radiographic manifestations, exclusion of mimicking disorders, and histopathologic detection of noncaseating granulomas. We describe a case of neurosarcoidosis with chronic leptomeningitis, non-obstructive hydrocephalus, bilateral cranial nerve VIII involvement, and peripheral neuropathy where whole body FDG-PET/CT was used to identify a suitable site for tissue biopsy.

A 60-year-old right-handed woman with hypertension, type II diabetes mellitus, and hypothyroidism presented with six months of gait imbalance, dizziness, hearing loss, chronic nausea, and vomiting. Three years prior to presentation, she was diagnosed with sensorineural hearing loss and left vocal cord dysfunction. A CT of the skull base and MRI of the neck were normal at this time. One year later, she developed intermittent nausea and vomiting that were attributed to gastroparesis. Following this evaluation, she developed vestibulopathy with vertigo and gait instability, worsening sensorineural hearing loss, and tinnitus. She also developed paresthesias radiating down her lateral lower extremities and in both hands. Her neurologic exam on presentation to the neurology service was remarkable for decreased vibratory sensation in the great toes, brisk reflexes throughout, and a narrow-based shuffling gait while leaning towards the right. Romberg sign was positive. An MRI of the brain and spine showed diffuse, mostly basal, leptomeningeal disease with nodular enhancement that extended caudally to the cauda equina nerve roots (Figure 1 and 2). These abnormalities were associated with non-obstructive hydrocephalus (Figure 1). 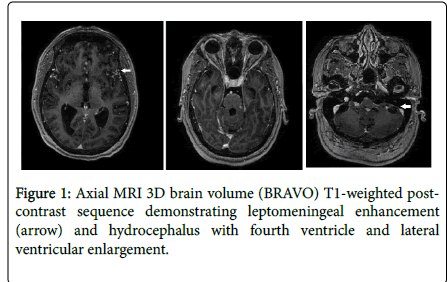 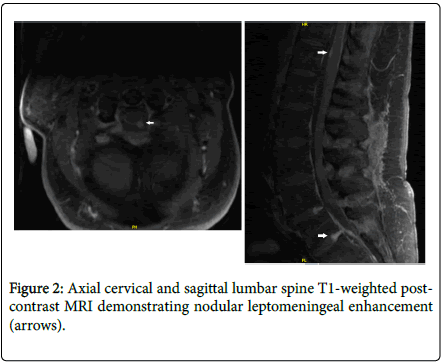 One month later, the nausea, vomiting, and gait instability progressed. She reported weight loss, constipation, urinary incontinence, and new dry, scaly macular skin lesions, one in the left supraclavicular area and one on her right upper extremity. Biopsy of the skin lesions showed dermatitis without evidence of cutaneous sarcoidosis. A whole body FDG-PET/CT scan performed for suspected underlying malignancy revealed intense uptake from the brainstem down to the remainder of the spinal canal, and intensely avid mediastinal and left hilar lymph nodes (Figure 3). A mediastinal lymph node biopsy showed non-necrotizing granulomas and fibrosis consistent with sarcoidosis (Figure 4 and 5). She was treated with a 5-day course of intravenous methylprednisolone followed by high-dose oral prednisone. A TNF-alpha inhibitor infliximab was introduced as a steroid-sparing agent 2 months later. This resulted in near complete radiographic resolution 2 months later. At her last follow-up, one year after her initial presentation to the neurologic service and nine months after treatment had been initiated; moderate subjective and objective clinical improvement was noted. Figure 4:Low power (20x) photomicrograph of hematoxylin and eosin stain of the biopsied lymph node, which shows replacement of the majority of the lymph node by conglomerated noncaseating granulomas. Figure 5:Higher magnification (100x) hematoxylin and eosin stain of a group of six ill-defined granulomas that were composed of epitheliod histiocytes. Necrosis and microorganisms were absent.

We describe a patient with neurosarcoidosis with several neurological manifestations, in whom the diagnosis was aided by whole body PET/CT. Diagnosis was difficult to establish despite extensive workup, including a biopsy of the brain parenchyma, arachnoid and dura. The two most common neurological complications of sarcoidosis are cranial neuropathies and chronic leptomeningitis with a predisposition for the basilar meninges, as seen in this patient [3,5]. This patient’s sensorineural hearing loss was caused by bilateral cranial nerve VIII involvement, and her left vocal cord paralysis was probably related to left cranial nerve X involvement. Her symptoms of nausea, vomiting, and ataxia were most likely related to the development of hydrocephalus from her leptomeningeal disease, as well as the aforementioned vestibulocochlear nerve involvement. In addition to the cranial neuropathies, chronic leptomeningitis, and non-obstructive hydrocephalus, this patient had clinical and radiographic features of radiculopathy and cauda equina syndrome manifesting with bladder and bowel dysfunction associated with sensory symptoms.

In regards to diagnostic workup, levels of angiotensin converting enzyme (ACE) in the cerebrospinal fluid (CSF) have poor clinical utility. Prior studies have documented variable sensitivities of CSF ACE ranging from 28% to 55-75% [5,6]; in Sohn’s review only 2 of 11 patients were noted to have elevated levels [6]. Recent study from Bridel et al. showed that there was no significant difference in CSF ACE levels in patients with confirmed neurosarcoidosis when compared to those with suspected disease but ultimately without the diagnosis, demonstrating both a low sensitivity and specificity [7]. Serum ACE levels are elevated in only 30-40% of patients with sarcoidosis [5]. Therefore, serum and CSF ACE levels are unreliable and insufficient.

Hypoglycorrhachia seen in this case is a well described phenomenon in patients with leptomeningeal Neurosarcoidosis [3].

CT imaging of the chest is often a standard part of the work-up for sarcoidosis in looking for hilar adenopathy, though in our case a CT chest showed only one enlarged subcarinal lymph node and scattered subcentimeter mediastinal nodes. PET was much more sensitive allowing for biopsy to attain a diagnosis [5]. A review by Treglia et al. of the utility of FDG-PET in evaluating disease extent in patients with sarcoidosis, as well as following clinical response, found several studies documenting utility of PET imaging as compared to conventional imaging, such as chest radiogram and CT alone, including a high percentage of discordant findings between FDG-PET/CT and high-resolution CT [8]. There was concordance in 45.7% of scans, but PET showed more extensive disease in 16 scans and detected unsuspected extrapulmonary disease in 10 out of 16 scans [8]. In addition to added sensitivity for diagnosis, PET imaging has been used to follow radiographic response to therapy.

Contrast-enhanced MRI of the brain is an essential study in evaluating patients with suspected neurosarcoidosis as it can identify hydrocephalus, leptomeningeal enhancement, and intraparenchymal granulomatous disease amongst other findings [2,5,9]. Though the different abnormalities seen with MRI can be quite broad, meningeal enhancement is much more suggestive of granulomatous disease than a demyelinating disease [9].

As suggested by neuroimaging, there was no evidence of parenchymal and dural histopathologic abnormalities. The non-specific mild hypercelullarity of the arachnoid, which was the primary site of the disease, probably reflected the limited tissue availability. The non-specific histopathologic abnormalities were documented in previous studies analyzing the diagnostic yield of meningeal biopsy in patients with chronic meningitis [10].

Therefore, in patients with suspected meningeal involvement in the setting of neurosarcoidosis, extraneural tissue should be sought not only for the ease of access and avoidance of morbidity but also to increase the diagnostic yield of the invasive procedures [5]. This case further emphasizes the utility in PET imaging to identify the extraneural tissue sites for the biopsy.

Neurological complications of sarcoidosis can be present without any systemic disease [9]. Biopsy is required to establish the definitive diagnosis, but its diagnostic yield may be limited in patients with cranial neuropathies and leptomeningeal involvement. Our patient had normal serum and CSF levels, an unremarkable CT scan of the chest, and an inconclusive leptomeningeal biopsy. PET imaging showed avid FDG uptake in the thoracic lymph nodes and thus identified the biopsy site. When choosing imaging modalities in patients with suspected sarcoidosis, we propose that whole-body PET-CT be considered rather than CT alone to evaluate the extent of the disease and determine appropriate sites for diagnostic biopsy.