+44-7482-864460
Role of Wnt/andBeta;-Catenin Signaling in Regulating the Balance between Oxidative Stress and Apoptosis in Peripheral Blood Mononuclear Cells from Patients with Facioscapulohumeral Muscular Dystrophy.

Role of Wnt/Β-Catenin Signaling in Regulating the Balance between Oxidative Stress and Apoptosis in Peripheral Blood Mononuclear Cells from Patients with Facioscapulohumeral Muscular Dystrophy.

Copyright: © 2016 Giacoppo S, et al. This is an open-access article distributed under the terms of the Creative Commons Attribution License, which permits unrestricted use, distribution, and reproduction in any medium, provided the original author and source are credited

The present study was aimed to investigate the role of Wnt/β-catenin pathway in peripheral blood mononuclear cells (PBMCs) derived from patients with Facioscapulohumeral muscular dystrophy (FSHD). Our results showed severe impairment in β-catenin signaling pathway in the PBMCs of FSHD patients. We suppose the aberration of β-catenin expression in the PBMCs of FSHD patients may greatly reflect the severity of neuromuscular degeneration of FSHD pathology per se, which may occurred due to the loss of β-catenin and its prosurvival and regenerative roles against the inflammatory/oxidative/apoptotic cascades of FSHD pathology. These preliminary data from four consanguineous FSHD patients may offer, at least in partial, putative molecular cues underlying the pathophysiology of FSHD.

Facioscapulohumeral dystrophy (FSHD) is the third most common type of muscular dystrophy after Duchenne and myotonic dystrophy with an incidence of 12 per 100,000 worldwide [1,2]. FSHD is an autosomal dominant disease with an insidious onset and development, characterized by progressive weakness and atrophy of facial, shoulder girdle and upper arm muscles [1]. Currently FSHD diagnosis is mainly based on clinical evaluation, often supported by a genetic confirmation.

FSHD is characterized by contraction or hypomethylation of repeat D4Z4 units on chromosome 4, which causes aberrant expression of the transcription factor DUX4 from the last repeat [3].

Kowaljow, et al. [4] initially proposed the role of DUX4 protein in FSHD, where they showed overexpression of DUX4 protein might induce toxicity to muscle cells and muscle degeneration.

To date several molecular pathways that activate or repress DUX4 transcription have been investigated in addition to the downstream events in unmodified primary cells from FSHD-affected people [5,6].

In this context, the Wnt/β-catenin signaling pathway has been demonstrated to be implicated in FSHD pathology for its role in muscle development, facial muscle organization and muscle repair by facilitating myoblast differentiation and myotube fusion [7,8].

Although it has been demonstrated that Wnt/β-catenin signaling is involved in FSHD [5,6], the molecular mechanism of Wnt/β-catenin pathway is still unclear.

Briefly, the Wnt/β-catenin signal transduction is characterized by a reaction cascade, which is initiated by extracellular Wnt molecules and that consequently leads to an accumulation of cytosolic β-catenin and its subsequent translocation into the nucleus. In the nucleus β-catenin binds members of the T-cell factor (TCF and lymphoid enhancer factor (LEF) transcription factors, triggering a pathway-specific gene response essential for the regulation of several processes including cell growth, regeneration and differentiation [9].

Recently, the involvement of Wnt/β-catenin pathway in FSHD disease has raised so much interest. In 2015, Banerji, et al. [6] reported a meta-analysis of multiple microarray datasets from FSHD muscle biopsies, in which a central role of β-catenin in DUX4-driven network rewiring in FSHD has been demonstrated. Activation of the Wnt/β- catenin signaling pathway suppresses DUX4 transcription in FSHD myotubes and can rescue DUX4-mediated myotube apoptosis. In addition, according to another study performed by Block et al. [5], β-catenin was identified as the main coordinator of FSHD-associated protein interaction signaling, together with pathways including canonical Wnt, HIF1-α and TNF-α clearly perturbed.

In parallel with the identification of pathways involved in FSHD pathology, recently Statland et al. [10] showed that the serum components of FSHD patients may provide novel molecular information as well as biomarkers for FSHD.

In the present study we investigated the role of Wnt/β-pathway in peripheral blood mononuclear cells (PBMCs) obtained from four consanguineous patients affected since around 20 years by FSHD, with a positive family history for this disease and that did not shown any symptoms of disease if not refer to FSHD.

We studied the case of four patients affected since around 20 years by FSHD and in specific a 44 and a 40 years old sister and a 37 and 33 years old brother. As shown in family tree (Figure 1) also the father was affected by FSHD and he is nowadays deceased, while the mother is healthy. Also, two paternal uncles, nowadays died, were suffering from the same disease. 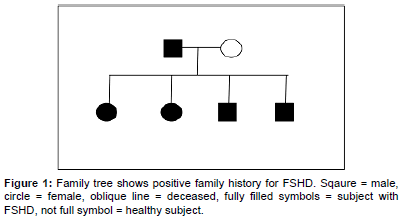 Genetic analysis was performed on the first daughter at disease onset (about 11 years old) by mapping of the disease locus to the subtelomeric region of chromosome 4, more specifically at 4q35 region with specific probes for FSHD. Following all the sons been subjected to the same genetic investigation confirming FSHD diagnosis.

At the enrolling moment, the two sampled patients, with the above reported positive family history for FSHD, were on wheelchair because of a severe weakness of the lower limb girdle and abdominal muscles; the involvement of shoulder and facial muscle was also important, as they had difficulties in raising arms and had a decreased facial expression with lagophthalmos and dysarthria.

Routine hematochemical test values were within the normal range. All these patients not suffering from any infection of the respiratory, urinary tract neither were subject to catheterization or venous access of some type.

In addition, hemogasanalisis was almost normal neverthless PCO2 has a value of around 50 mmHg in all patients. Thoracal CT as well as electrocardiography was normal.

FSHD patients did not show symptoms correlated with other diseases otherwise than on FSHD. For this reason healthy controls (N=5, mean age 35 years, 3 males and 2 females), were chosen so as to be well comparable to patients. Specifically, healthy controls were nonsmokers and not suffering from any disease, infections or subject to any pharmacological treatment.

Also In addition, healthy control donors were subjected to genetic investigation to exclude any mutation involved in any genetic diseases or with a positive family history for genetic diseases.

Patients as well as healthy control donors selected have been subjected to a blood sampling after signing the informed consent for the processing of data for research purposes. 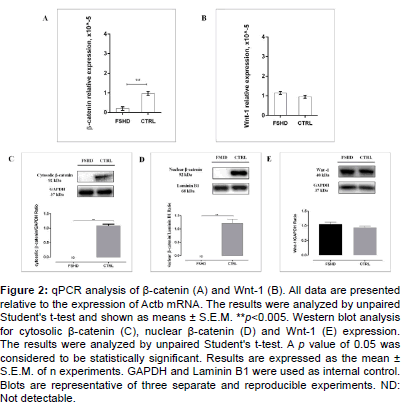 Figure 2: qPCR analysis of β-catenin (A) and Wnt-1 (B). All data are presented relative to the expression of Actb mRNA. The results were analyzed by unpaired Student's t-test and shown as means ± S.E.M. **p<0.005. Western blot analysis for cytosolic β-catenin (C), nuclear β-catenin (D) and Wnt-1 (E) expression. The results were analyzed by unpaired Student's t-test. A p value of 0.05 was considered to be statistically significant. Results are expressed as the mean ± S.E.M. of n experiments. GAPDH and Laminin B1 were used as internal control. Blots are representative of three separate and reproducible experiments. ND: Not detectable.

Therefore, we have supposed that the aberration of β-catenin expression could be crucially involved in the failure to maintain a balance between oxidative stress and apoptosis triggered by NFkB nuclear translocation. It is known that in several types of cancer β-catenin can directly interact with NF-kB, resulting in a reduction of NF-kB transactivation activity [13].

In our study, we found a marked increase in nuclear translocation of NF-kB (Figure 3B) with a cytoplasmic degradation of IkB-α (Figure 3A) in FSHD patients which triggers the downstream-associated apoptotic and cell death mechanisms as confirmed by an enhanced expression of pro-inflammatory cytokines, like TNF-α. (Figure 3C). 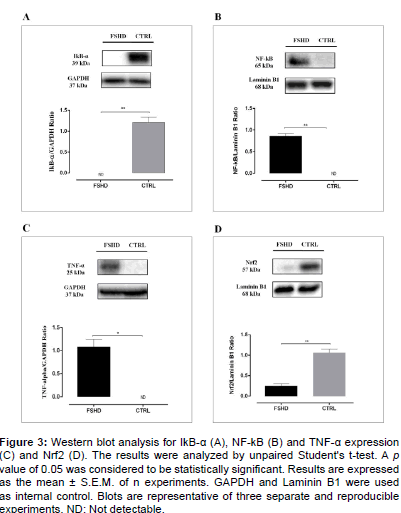 Figure 3: Western blot analysis for IkB-α (A), NF-kB (B) and TNF-α expression (C) and Nrf2 (D). The results were analyzed by unpaired Student's t-test. A p value of 0.05 was considered to be statistically significant. Results are expressed as the mean ± S.E.M. of n experiments. GAPDH and Laminin B1 were used as internal control. Blots are representative of three separate and reproducible experiments. ND: Not detectable. Figure 4: Western blot analysis for iNOS (A), Nitrotyrosine (B), PARP-1 (C) and SOD1 expression (D). The results were analyzed by unpaired Student's t-test. A p value of 0.05 was considered to be statistically significant. Results are expressed as the mean ± S.E.M. of n experiments. GAPDH and Laminin B1 were used as internal control. Blots are representative of three separate and reproducible experiments. ND: Not detectable.

Among the first cellular responses to DNA damage is the production of Poly (ADP-ribose) polymerase (PARP), a marker of oxidative stress synthesized in large quantities by PARP enzymes, whose activity increases when cells are subjected to injury [15].

Continuous or excessive activation of PARP-1 resulted in a substantial depletion of ATP, leading to cellular dysfunction and cell death [16]. Here we found an increased expression of PARP-1 in FSHD patients compared to healthy control donors (Figure 4D).

As PARP expression is correlated and in turn activated by caspases, we investigated the expression of cleaved caspase-3 (Figure 5A) and cleaved caspase-9 (Figure 5B), and found enhanced expression of these proteins in FSHD patients. Moreover, correlation between caspases and Bax/Bcl-2 expression suggests a role of mitochondria in this cell death pathway [17]. Indeed Bax is known to induce apoptosis through the release of cytochrome c from mitochondria and activation of the caspase 3 and 9 pathway, while Bcl-2 promotes cell survival. In our study we noticed an upregulation of Bax and a downregulation of Bcl-2 in the PBMCs of FSHD patients (Figure 5C). 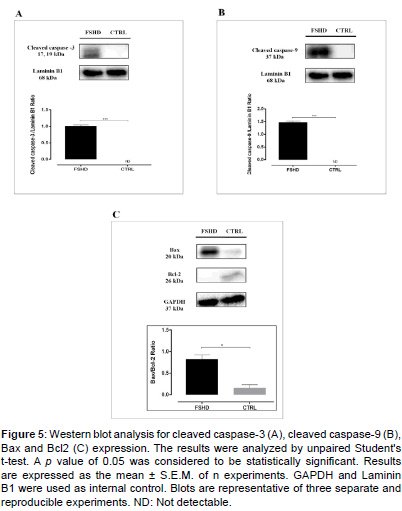 Figure 5: Western blot analysis for cleaved caspase-3 (A), cleaved caspase-9 (B), Bax and Bcl2 (C) expression. The results were analyzed by unpaired Student's t-test. A p value of 0.05 was considered to be statistically significant. Results are expressed as the mean ± S.E.M. of n experiments. GAPDH and Laminin B1 were used as internal control. Blots are representative of three separate and reproducible experiments. ND: Not detectable.

In summary our results showed severe impairment in β-catenin signaling pathways in the PBMCs of FSHD patients.

Although the present study is limited by the small number of patients, our results from four consanguineous FSHD patients may offer, at least in partial, putative molecular cues underlying the pathophysiology of FSHD.

We strongly hope that this preliminary evaluation can be an alert to the whole scientific community for further studies.

The authors declare no conflicts of interest in relationship to performing this study.