Copyright: © 2016 Tzu-Hsuan C, et al. This is an open-access article distributed under the terms of the Creative Commons Attribution License, which permits unrestricted use, distribution, and reproduction in any medium, provided the original author and source are credited.

Danger signal was first proposed in 1994. In response to danger signal, dendritic cells, as the director of the T-cell immune system, would be matured and further enhance T-cell response. Hyaluronan had been reported as one of endogenous danger signals. Because of Seprafilm (most used for preventing post-operation adhesion) is also an hyaluronate-based agent, so we choose Seprafilm as our “candidate” of emerging danger signal to increasing T-cell response. We perform a pilot study in 10 ovarian cancer patients to compare the immune risk profiles between cases using Seprafilm (5 cases) and not using Seprafilm (5 cases). We found that there is no statistical difference on the immune risk profiles between two groups. However, a trend of increased CD4 in Seprafilm group was noted, indicating that Seprafilm might be an optional agent mimic danger signal. The potential value of Seprafilm to augment host immunosurveillance to improve survival rate in cancer patients is unknown, further study is needed to clarify the possibility of clinical applications.

Most of the cases of ovarian cancer are diagnosed as advanced stage. Although there is 70% to 80% of complete remission after standard treatment (including debulking surgery, chemotherapy and radiotherapy), they still face 60% to 70% chance of disease relapse. Once relapse, they suffer from detrimental outcome following first-line treatment [1]. So we urgently need better therapy, and how to augment the host immunosurveillance may be the way forward.

From 2009 to 2010, we collected 10 cases of ovarian cancer patients at Linkou Chang Gung Memorial Hospital, Taiwan. This study was approved by the Institutional Review Board of the Chang Gung Memorial Hospital, Taiwan (100-3902A3 & 103-4220C), and the informed consent are obtained from all the patients. The characteristics of the 10 patients are listed in Table 1. All these ovarian cancer patients received surgery. Among the 10 cases, five cases had Seprafilm (15 cm × 13 cm, genzyme) placed during surgery, and the other five cases don’t have Seprafilm placed during surgery.

Characteristics of the patients

Harnessing immune cells switched Th1/Th2 responses in relapse of ovarian cancer that all signals were needed [3]. After conventional optimal debulking operation, we tried to find a way to trigger antigenpresenting cells such as dendtritic cells, macrophages and B cells which would generate and/or amplify host immunosurveillance. The final goal is to improve overall survival, long-term survival rate and prevent relapse of ovarian cancer.

The term “danger signal” was proposed in 1994. It’s an alarm signal sent by dead, damaged or invaded cell, which included exogenous and endogenous origin. In response to danger signal, dendritic cells “the director of the T-cell immune system” would be matured and further enhance T-cell response. For naïve T-cell activation, the danger signal mimic signal 0 to facilitate dendritic cells. Based on the above theory, we hoped to find a substance we could apply on increasing T-cell response. In the past, hyaluronan had been reported as one of endogenous danger signals [4,5]. Seprafilm which is a hyaluronate-based agent was used for preventing postoperative adhesion. The Seprafilm hydrates to form a gel-like fluid within 24 h to 48 h, and is slowly resorbed within 7 days [6]. Our hypothesis is that additional Seprafilm placed during operation could mimic danger signal and induce intraperitoneal immune response. If further proved, it might be an additional management option for ovarian cancer patients, which had 5-year-survival rate around 50% and even worse in advanced stage [7].

In our study, we observed that CD4 had an increasing trend in Seprafilm group compared to non-Seprafilm group, although it doesn’t has statistical significance. The results indicate that Seprafilm may mimic danger signal to activate more dendritic cells. Later, matured DCs could be initiators of immune responses like stimulation of quiescent, naive and memory, B and T lymphocytes [8-11]. Effector T-cell such as cytotoxic T-cell had role in destroying cancer cell. Memory effector cell could play a part in protecting our body from cancer cell recurrence. Naïve T cells are activated in secondary lymphoid tissue by dendritic cells presenting cognate antigen and providing co-stimulation. In all these effector T cells, approximately 90% to 95% will die over 1-2 weeks. Other 5% to 10% of the antigen-specific T-cell population survives and maintained indefinitely. That means, few activated T cells generate fewer effector T cells, much fewer memory T cells. Based on this, if we can activate more dendritic cells, we will activate more effector T cells and memory T cells (Figure 1). 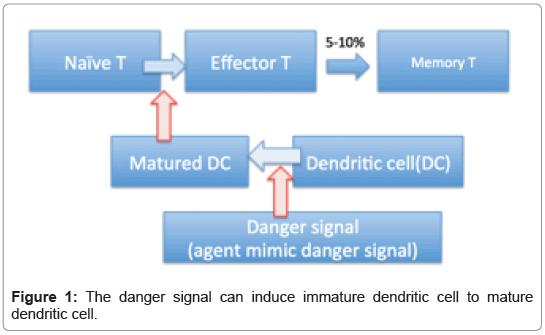 In the previous study, Ruiz-Perez et al. had reported that Seprafilm as a immunomodulator in sepsis (animal model) [12-14]. It had showed a trend in suppression of T-cell proliferation and reduction in their ability to release IL-2 and TNF-a. Our study shows similar result, that is, signal 2 CD28 had less elevate mean of immune cells index in Seprafilm group than non-Seprafilm group.

As we know, there are three kinds of danger signals. First, classic danger signal, refer to pathogen-associated molecular patterns (PAMPs) or directly derived from tissue injury damage-associated molecular patterns (DAMPs), or secreted by activated immune cells. Second, emerging danger signal, include inorganic materials and man-made technologies. Third, homeostatic danger signal, represent perturbations in tissue steady state resulting inflammation. In our study, Seprafilm could be regarded as our “candidate” of emerging danger signal. We also collected uric acid, CRP, LDH and d-dimer as suspected clinical danger signal marker. We found elevated uric acid in all patients who survived over 5 years (Table 3.1), and D-dimer elevation in all patient in non-Seprafilm group (Table 3.4). We supposed uric acid could be regarded as clinical monitor of danger signal, and elevated d-dimer may relate to poor prognosis.

In conclusion, we believed that Seprafilm could be an optional agent mimic danger signal. Reliable clinical markers to monitor danger signal can assist in monitoring efficacy of immunotherapy, and uric acid may be a useful marker. Further studies with larger sample size and cytokine profiles were needed, which is important for improving survival rate and prevent cancer relapse.