Copyright: © 2016 Hakimi S, et al. This is an open-access article distributed under the terms of the Creative Commons Attribution License, which permits unrestricted use, distribution, and reproduction in any medium, provided the original author and source are credited.

Background: Alzheimer’s disease (AD) is a neurodegenerative disease and is the most common because of late life dementia. Alteration of Secretary Phospholipase A2-IIA (sPLA2-IIA) may have an important role in membrane phospholipids metabolism and the pathogenesis of AD. The aim of our study was to determine serum levels and genetic variant of sPLA2-IIA in Alzheimer’s disease and compare to controls.

Methods: This study included 40 healthy unrelated individuals and 40 patients with AD. Serum levels and the polymorphisms of sPLA2-IIA enzyme were determined.

Alzheimer’s disease (AD) affects more than 27 million individuals and may reach to 86 million people by the year 2050. Late-onset AD forms more than 90% of all AD cases which signs of disease appear after the age of 65 years [1]. The AD is characterized by loss of synapses and neurons and decrease in brain volume [2]. Alzheimer’s disease (AD) is a neurodegenerative disease and is the most common because of late life dementia [3]. The most cases of AD are thought to be occasional. Alzheimer`s disease is a multifactorial disease. The pathology of AD may affect by lifestyle, genetic and environmental factors. Genetic factors, seems to play an important role [4]. There are over 30 different types of PLA2s in different mammalian cells. These different types may have role in regulating of specific cell functions. The most important PLA2 family is separated into cytosolic PLA2 (cPLA2), calcium-independent PLA2 (iPLA2), and secretary PLA2 (sPLA2) [5].

Secretary phospholipase A2-IIA (sPLA2-IIA) catalyze the splitting of fatty acids from the sn-2 position of glycerophospholipids and produce a non-esterified fatty acid and lysophospholipids. sPLA2s take part in digestion of phospholipids, cell membranes remodeling and host defense. There are more than 19 different isoforms of mammalian PLA2 [6]. The human sPLA2-IIA consists of 144 amino acids [7]. The gene of human sPLA2-IIA is located on chromosome 1p35. sPLA2- IIA mRNA is shown in all part of brain region. It is highly and lowly expressed in the brainstem and midbrain, and cerebellum and corpus striatum, respectively [8]. SPLA2 is expressed in the brain of AD patients [9]. Many studies have indicated that there are an association between increased levels of secretory phospholipases (sPLA2s) and coronary heart disease (CHD), rheumatoid arthritis and asthma [10- 12]. Secretary phospholipase A2-IIA is the most expressed of the sPLA2 proteins. It is expressed in the liver (secretion into the blood stream) and in the arterial wall [13]. A number of other studies have shown the physiological and pathological roles of PLA2 in AD [14-19]. Many studies have revealed the association of genetic polymorphisms with AD pathophysiology, but the results were consistent [20,21]. Phospholipids in Brain are an important place for the occurrence of interaction between genes and environment [22]. It has been reported that Brain PLA2 activity decreased in patients with AD [23,24] and decreased activity of PLA2 was associated to earlier onset of dementia, earlier age at death [24]. In vitro study has shown that decreased PLA2 activity has an important role in membrane phospholipids metabolism alterations and the pathogenesis of AD [25]. The aim of our study was to determine genetic variant of sPLA2-IIA and its serum levels of enzyme in Alzheimer’s disease and compare to control groups.

This study included 40 healthy unrelated individuals (age range: 45-86 years old) and 40 patients with AD (age range: 45-90 years old). The Alzheimer patients were chosen from an elderly nursing home in Gorgan, Iran. Patients with type 2 diabetes mellitus, liver disease, renal failure and chronic infectious disease were not included in this study. Two groups were matched according to age and gender. The Ethics Committees of Deputy of Research at Golestan University of Medical Sciences was approved our study. Mini Mental State Examination (MMSE) was used by a neurologist to diagnose Alzheimer’s patients. Written agreement was achieved from relatives of all subjects. Five ml blood samples were collected in tubes with EDTA and serum tubes for determination of secretary phospholipase A2-IIA genotypes and levels, respectively. Serum levels of enzyme were determined by the method sPLA2 (human Type IIA) EIA Kit (Cayman Chemical Company, Item No. 585000, USA) by using ELISA technique at the Metabolic Disorders Research Center, Gorgan Faculty of Medicine.

Preparation of 25 μL reaction mixture for the ARMS R2-PCR process was the same except for concentration of MgCl2 (0.62 μL, 100 mM) and double distillated water (16.08 μL). 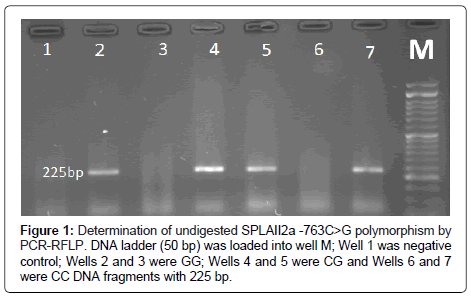 Figure 1: Determination of undigested SPLAII2a -763C>G polymorphism by PCR-RFLP. DNA ladder (50 bp) was loaded into well M; Well 1 was negative control; Wells 2 and 3 were GG; Wells 4 and 5 were CG and Wells 6 and 7 were CC DNA fragments with 225 bp.

Data are shown as percentage, examined by the χ² test. P value <0.05 were considered significant for genotypes of enzyme between two groups.

Data are shown as mean concentration and mean rank, examined by Independent sample t test. P value <0.05 were considered significant for genotypes and alleles of enzyme between two groups.

Table 2: The mean concentration and mean rank of genotypic distribution of the sPLA2 gene in Alzheimer’s patients and control group.

Etiology of AD seems to be complicated. In this study, we researched the concentration of and genetic polymorphisms of sPLA2 in Alzheimer's patients and compared with control group. The basic finding of this study was that the level and polymorphism of sPLA2 were significantly different in Alzheimer's patients in comparison to controls. Our results indicated those of some studies which showed that the levels of mutated enzyme (With high CG and GG genotypes levels) are significantly increased in AD [27]. Some studies have indicated that the variation of sPLA2IIA polymorphism is associated with the levels of this enzyme [27]. Our study reveals that there is association between higher sPLA2-IIA levels with expression of the C allele. Our findings showed that the allele C may be a protective genetic factor to AD. There are significant difference in the frequency of the C and G alleles between Alzheimer's patients and controls. It has reported that mRNA is shown for expression of the sPLA2-IIA in the brain [28] and sPLA2 type IIA activation may cause to neuronal death [29] and depressive disorder [30]. Many studies have shown that there is a diversity of PLA2 enzymes in human. Six isoforms of the sPLA2 enzyme were identified in the brain (sPLA2-IIA, sPLA2-IIC, sPLA2-IIE, sPLA2-V, sPLA2-X and sPLA2-XII) [7,8,31,32]. This diversity of enzymes may show the distinct functional roles of specific isoforms. Some studies have shown a decrease in the activity of PLA2 in the brain of subjects with AD. Decreased activity of total PLA2 was observed more in the postmortem parietal and frontal cortices of AD subjects. It was reported that there was a correlation between decreased level of PLA2 and the severity of dementia [23,24]. Studies on AD patients have shown that brain PLA2 phospholipases A2 are changed in different ways. These alterations may have different functional implications in Alzheimer disease [29]. It has been also revealed that activity of cPLA2 and iPLA2 enzymes decreased in postmortem brain [23,24,33,34] and cerebrospinal fluid [14] of patients with AD. Some other studies have reported that there are increased level of secreted PLA2 (sPLA2) in cerebrospinal fluid of patients with AD [15]. Among all brain tissue PLA2 isoforms, the functional roles of specific isoforms of the sPLA2 group have been better described. The recent study has shown that PLA2-IIA is the only isoform detectable in the blood stream, especially under pathological conditions [35]. Thus, it is also important to investigate the level and activity of sPLA2 isoforms. These enzymes may show a significant role in neuronal differentiation, Survival and neuronal death [36-39]. Studies on the rat model have revealed upregulation of sPLA2-IIA enzyme in the brain in reaction to injury and inflammation [40]. It has been shown that in rat spinal cord injury, expression of sPLA2- IIA increased [41-43]. Study on brains of human with AD indicated that sPLA2-IIA mRNA expression in the hippocampal region of Alzheimer patients increased when compared to age-matched, nondemented controls [9]. These present results suggest that there are a variation between the expression of sPLA2-IIA in Alzheimer patients and the risk of AD. Some studies have shown that sPLA2-IIA [44] produces reactive oxygen species (ROS). This may cause membrane lipid peroxidation and impair the integrity of neuronal membranes. Elevation of oxidative stress in an early event in AD causes reduction in disease progression and formation of lesions [45]. Studies have shown that ROS is produced during the metabolism of arachidonic acid [44]. Some other studies have been reported that sPLA2-IIA causes apoptosis in neurons and contributes to neurodegeneration in the ischemic brain [46-48]. Because of various effects of sPLA2-IIA on cells, it needs to investigate the mechanisms of this enzyme.

This work has been supported by the Research Deputy of Golestan University of Medical Science.

Declaration of Conflicting of Interests

The authors declared no conflicts of interest.

The authors would like to thank the Research Deputy of Golestan University of Medical Sciences for financial support. This research project was derived from MSc Thesis in Clinical Biochemistry. The corresponding author wishes to thank Mrs Safoura Hakimi for her sincere help.